It is through my husband that I have come to know the company Fourth Element and their uniquely designed wetsuit called thermocline.  Unlike my past reviews, this one is based on the comments James provided to me after using his thermocline suit about 10 times.

My husband is allergic to the chemical accelerants that are released when neoprene becomes wet; therefore, wearing a wetsuit is completely out of the question.  Before realizing that he had this allergy, he actually went snorkeling and wore neoprene booties for about an hour and a half.  By the next day he had poison-ivy like symptoms from head to toe.  When a doctor diagnosed him as having a neoprene allergy he felt for sure that scuba diving just wouldn’t be a sport he could learn, especially if some sort of exposure protection was needed.

After searching the internet a bit he came across Fourth Element, a UK based company that has a specialized line of wetsuit protection meant for divers with a neoprene allergy called Thermocline.  He quickly ordered several pieces of thermocline protection and he’s been relatively satisfied with the purchase.  It’s helped him get in the water with adequate protection and he no longer has the allergic reactions he once had.

Compared with neoprene suits which are positively buoyant, Thermocline suits are neutrally buoyant.  Having a neutrally buoyant exposure suit will allow a person to seriously cut back on the amount of lead they’ll need to dive with.  When I was certifying my husband, I didn’t realize that his suit was neutrally buoyant so when we got out to the ocean and did a buoyancy check we ended up taking off nearly half of what he was originally wearing.  For those that don’t like carrying weights, buying a thermocline suit could really help you lighten the load.

Another great feature is the compactness of the material.  It feels like thin fleece and folds very small.  If you plan on traveling and want to bring your own gear (rentals can be so ridiculously expensive sometimes), this is definitely more compact than any neoprene wetsuit I’ve seen.  Because of its fleece-like material, the Thermocline gear can be cleaned in a washing machine but we like to let it air dry.  James has noted that he wouldn’t want to wash it after every single use because he feels like the stitching might get worn out (I agree).  The one good thing is that if the stitching does start to come loose, a tailor could probably fix it without a problem.

James also noted that he wears lycra shorts (like UnderArmour) and a rash guard shirt as a base layer to ensure that there is no chaffing or rubbing.

One major drawback to purchasing Fourth Element’s Thermocline product line is that it will be shipped from the UK, so you’re looking at a long delivery time (about 2 weeks) and international shipping rates.  The gear also tends to be more expensive than a regular wetsuit and you’ll also have to factor in exchange rates between the US Dollar and British Pound.  However, if you have a neoprene allergy but you really want to dive, this is definitely a purchase to make.

There are several different pieces in the Thermocline wetsuit system so I will briefly give a summary of each below. 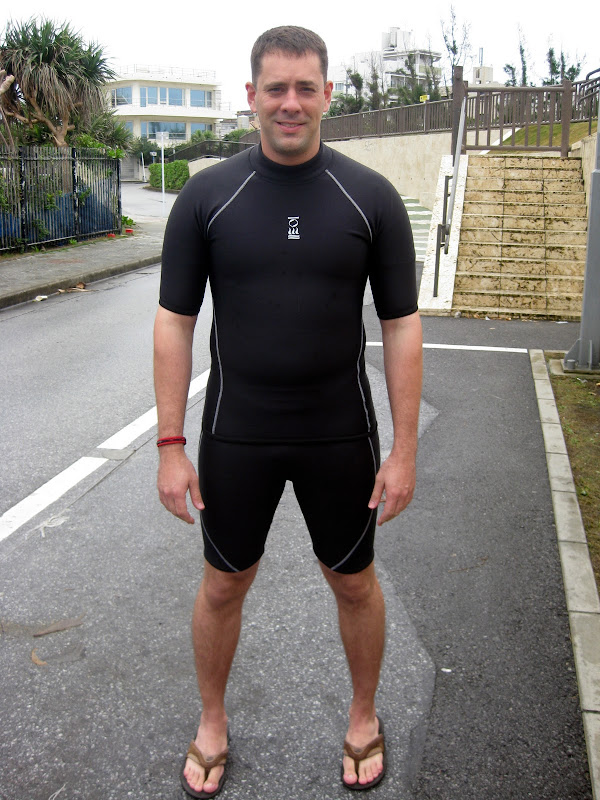 The Thermocline Explorer is styled a bit like a farmer john wetsuit; however, the Explorer does not have any zippers.  James told me it’s super easy to put on.  Basically just step in through the leg holes and then pull it up and slip your arms through the shoulder straps.  When paired with a Thermocline Long Sleeve Top, a diver will be provided the equivalent of 3 mm of neoprene at their core and 2mm of neoprene on their arms and legs.  Together, the Thermocline Explorer and Long Sleeve top total 2.2 lbs…talk about perfect for dive travel! 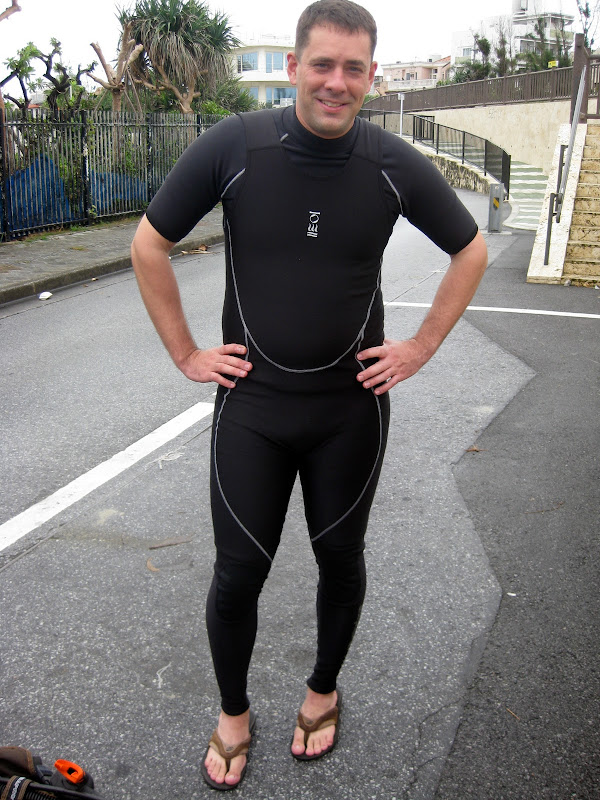 James Wearing The Explorer Over Shorts and Short-Sleeve Top

James found that the protection he got from wearing just the Explorer and Long-Sleeve Top wasn’t enough for water temperatures 75°F or lower; hence, the purchase of the shorts and short-sleeve top.  When wearing all the components (SS Top, Shorts, Explorer, and LS Top) together, James has the equivalent of 5mm of neoprene at his core and 3mm of neoprene on his extremities.  Now James stays comfortable in water around 70°F for about 40 minutes. 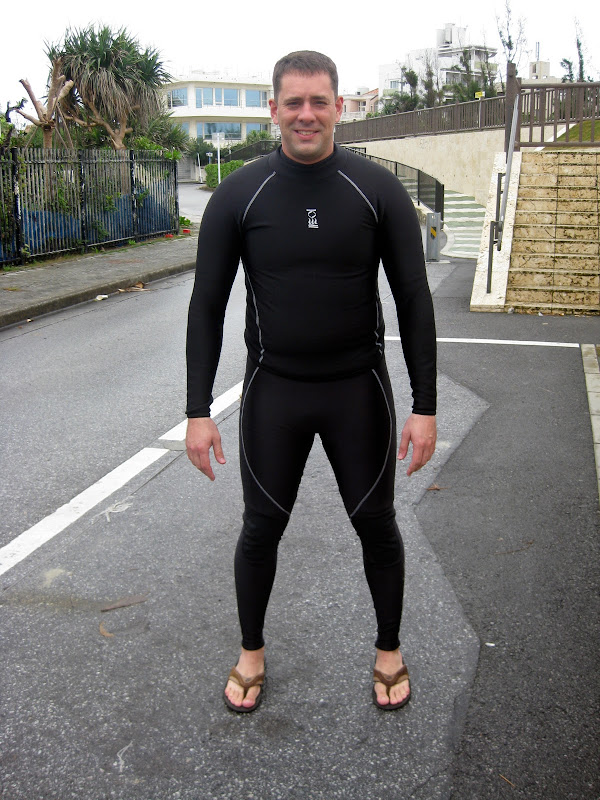 Because water is a good conductor of heat, more than 20 times that of air, it’s important to cover up all parts of the body when diving.  James went ahead and purchased the Thermocline Hood to give his head a little extra protection.  After diving with is several times, James said he is absolutely convinced that it helps him stay warmer but it’s not as snug as a neoprene hood. Finally, he bought some Finsock Wetsuit socks to wear on his feet to provide a barrier between his skin and neoprene shoe.    He’s never once complained of them rubbing or being uncomfortable. 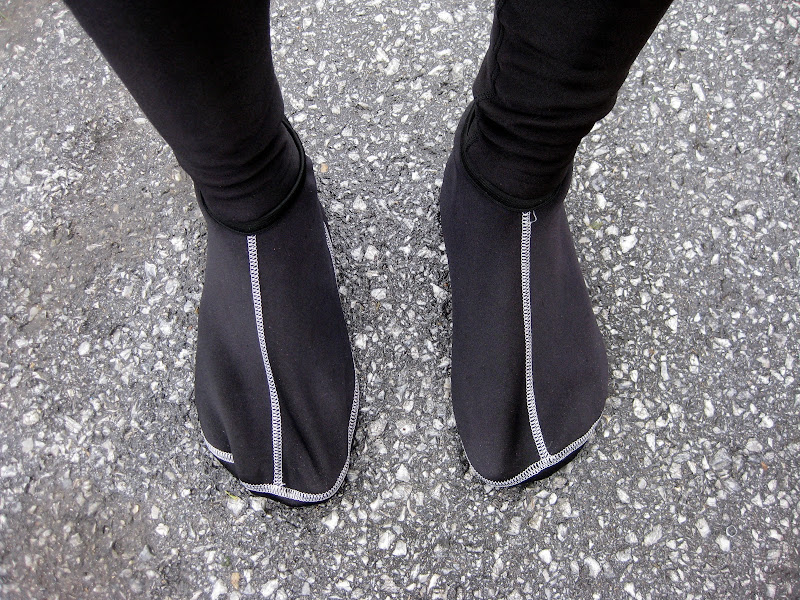 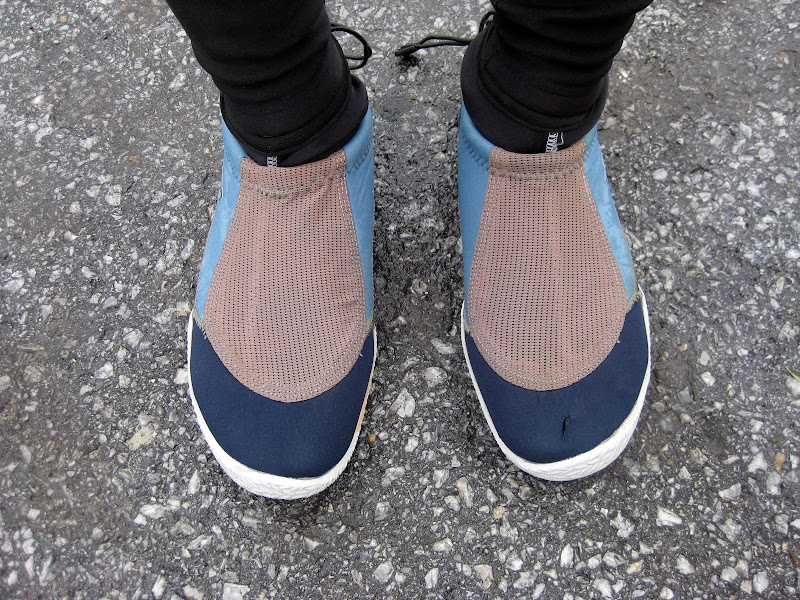