To finish off the night diver specialty class, we met up at Ark Dive for a single dive.  I was delighted to find a waspfish at the very beginning of the dive.  I also saw numerous flatworms and nudibranchs.

After briefing the dive plan everyone swam out along the chain and then we descended down to the bottom.  As I near the ocean floor I noticed there was a leaf-like object swaying back and forth…but it didn’t look exactly like a leaf.  I swam closer and eventually realized it was a waspfish.  Awesome!  I had been looking for these guys for about 9 months so I was super excited to see it.  I don’t think the other people in the dive group were too enthralled with the find because when I showed them what I was looking at they only looked at it quickly.  I nabbed some photos and then decided to move on. 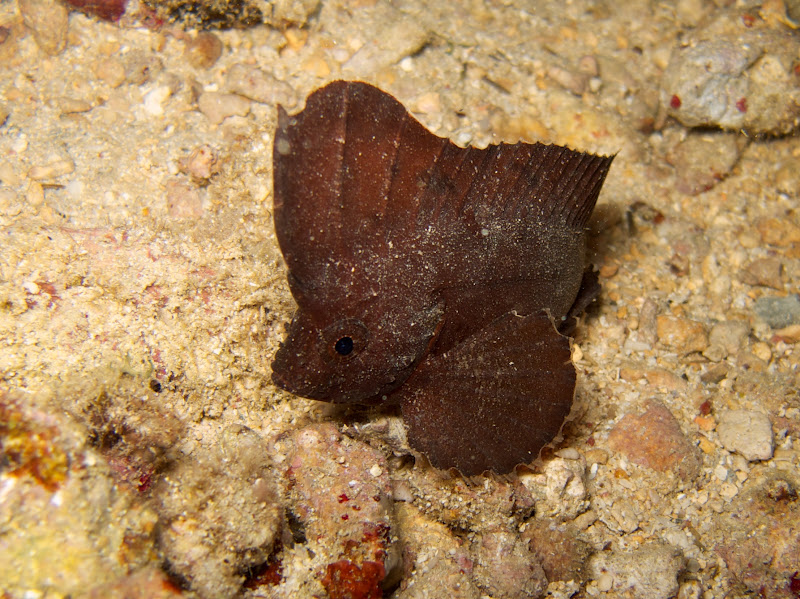 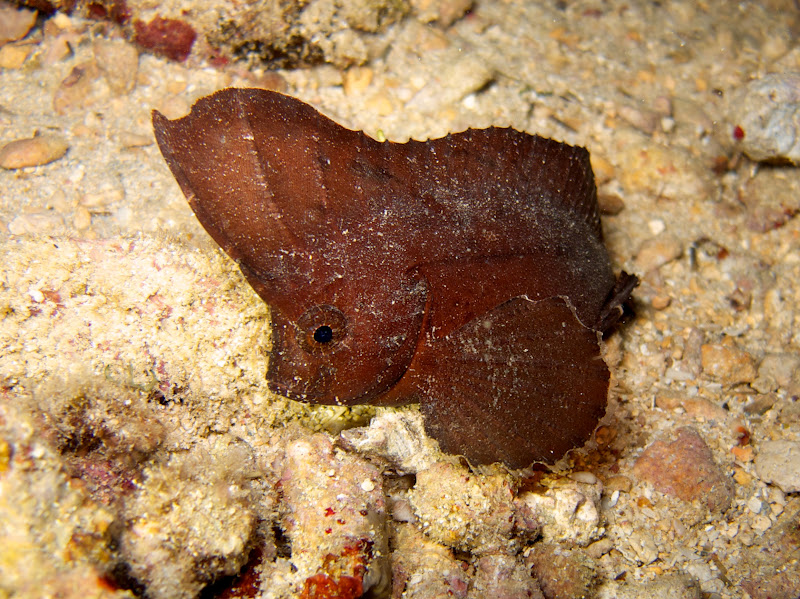 On this dive I saw a particularly large quantity of flatworms.  The first I saw was a Pseudobiceros Sp. with black and white stripes with an orange colored border. 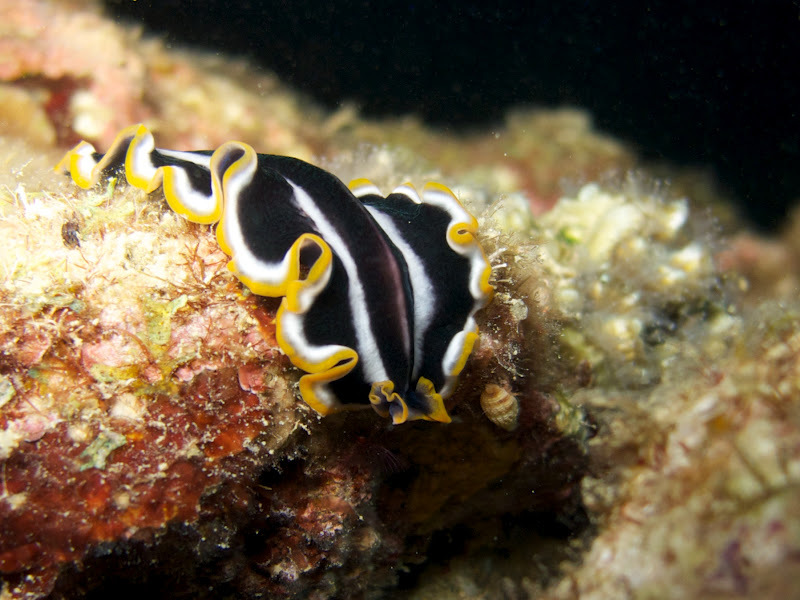 Near the Pseudobiceros sp. flatworm I noticed a crab crawling on the reef wall.  It was blended in pretty well and the only reason I saw it was because it started running away from my light beam. 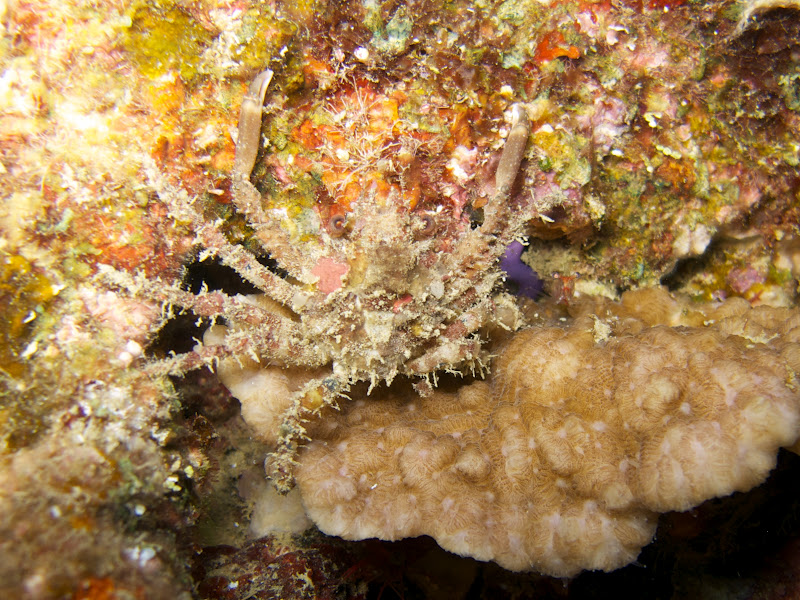 Another flatworm that we saw on the dive was a Pseudobiceros glariosus.  Even though these particular flatworms only feature 2 colors they still look pretty awesome. 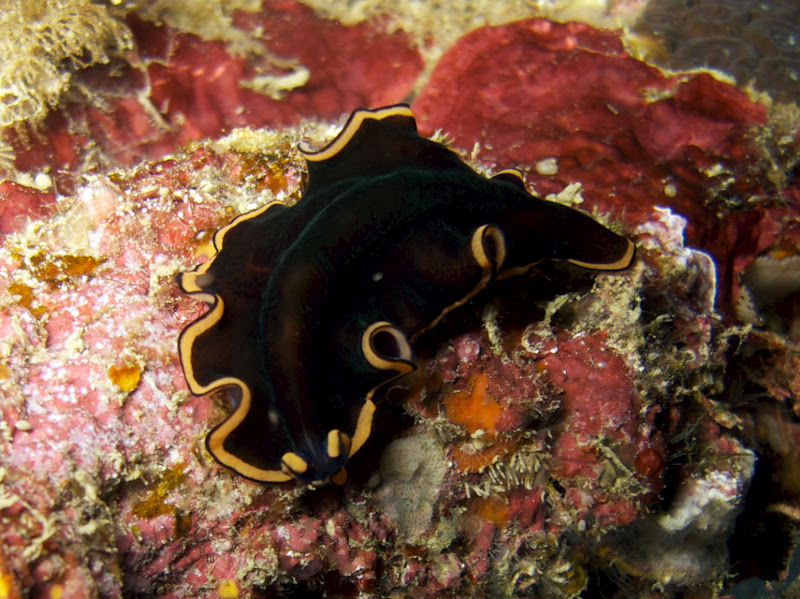 After we had turned around James led to dive group back to the chain.  I hung out in the back and kept an eye on everyone while shooting photos.  As I came upon a section of the reef wall I noticed a banded sole pressed up against the rock.  See if you can find it in the below photo. 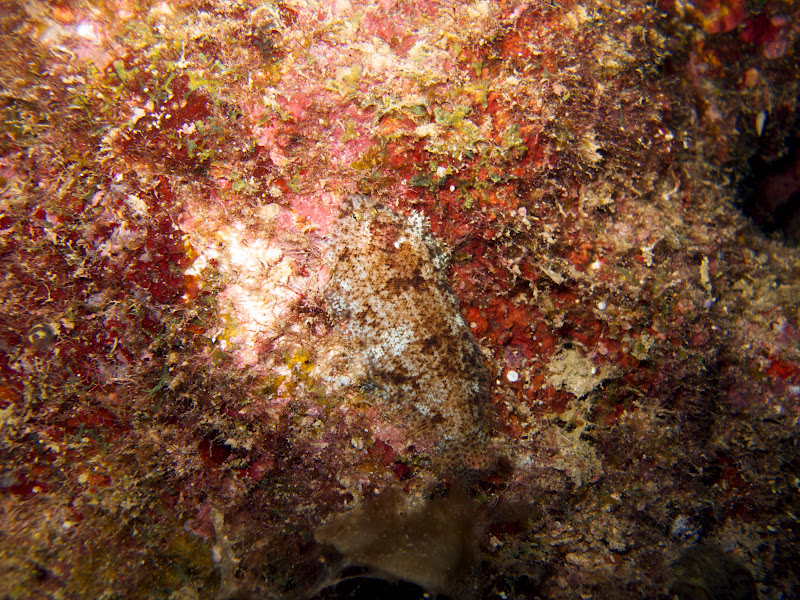 Can You Spot The Banded Sole?

I’ve created a box around the banded sole.  The part of the fish that I noticed first was the blue coloring on it’s back.  I have seen this type of fish only once before and it was on a night dives at Maeda Point. At Maeda Point is was laying on the bottom of the ocean floor and it had blended in really well there too.  Isn’t it awesome how it could be up against a reddish background and blend in but also do equally well against a sand-colored background?  God’s creation is truly amazing. 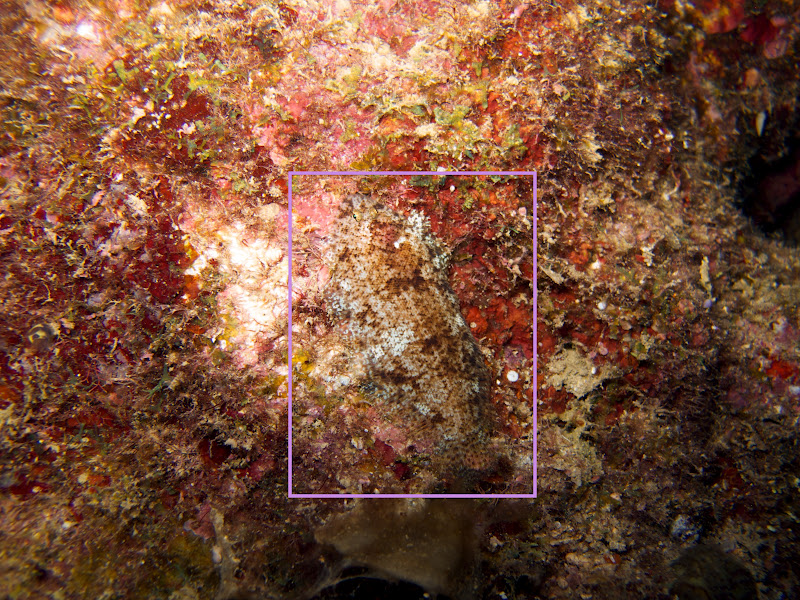 I also found a Pseudobiceros Fulgor Flatworm.  I absolutely LOVEthis type of flatworm because it’s red….red is my favorite color.  The white lines also give the flatworm the appearance of moment in photos too.  It really makes the subject matter a lot more interesting and just some flat, boring object. 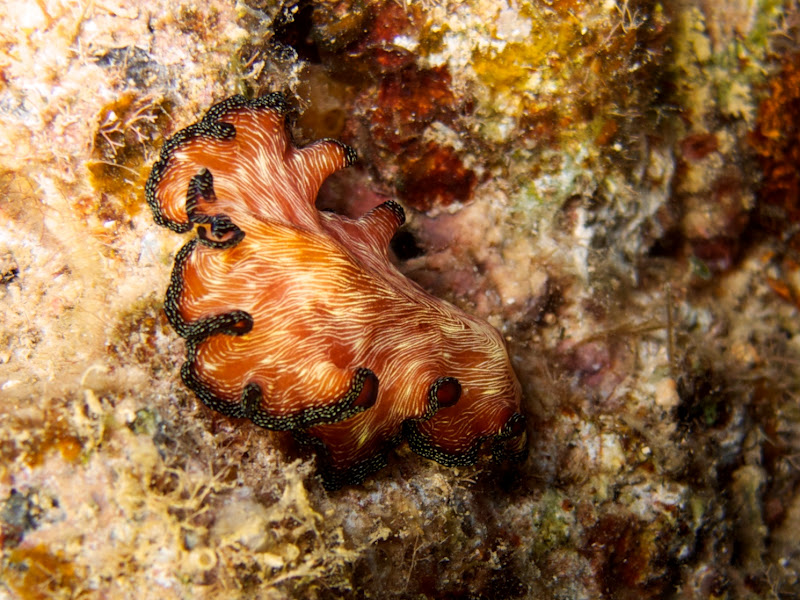 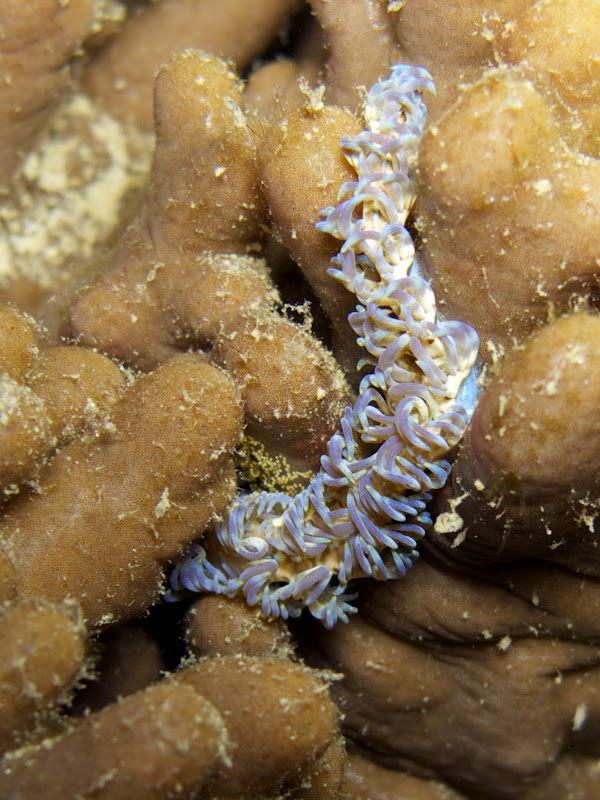 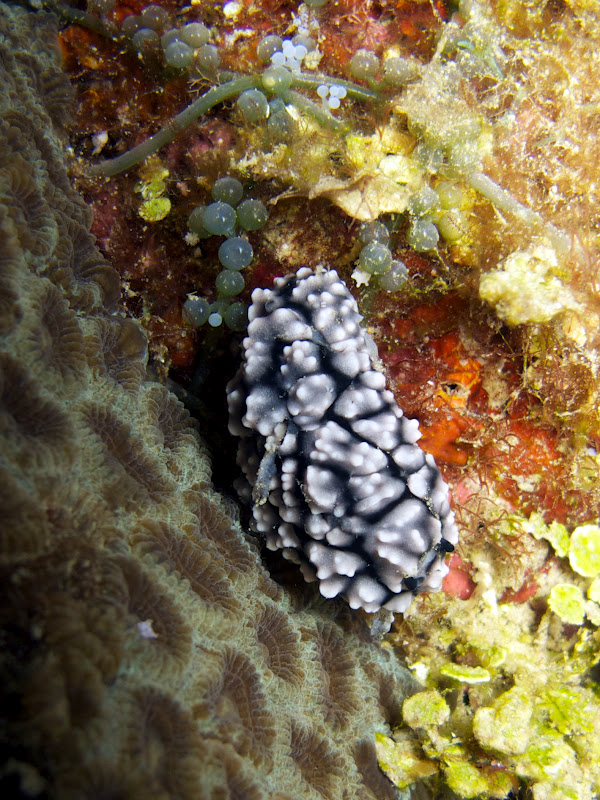 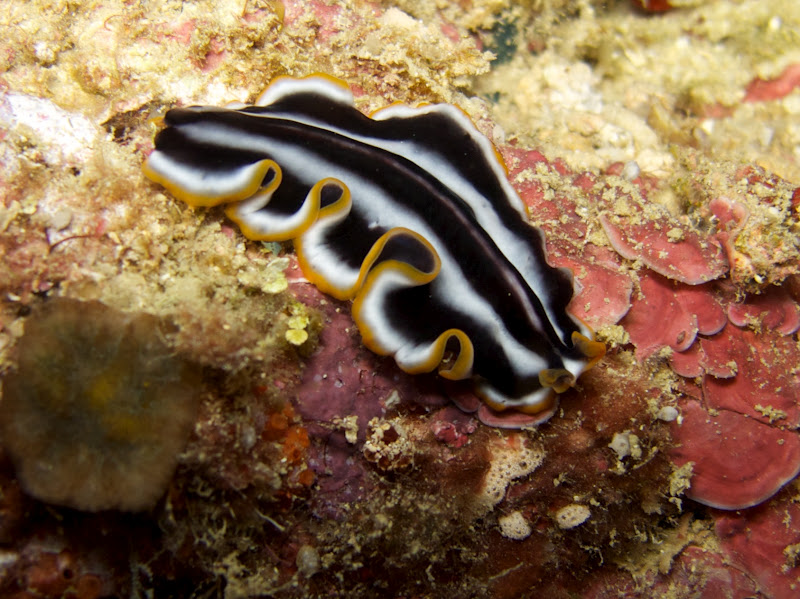 Right before going into the 20 ft area, I noticed a shrimp hiding under the ledge.  I took a quick photo of it but didn’t really except it to turn out very well.  However, when I looked at it on my computer it turned out a TON better than I excepted. 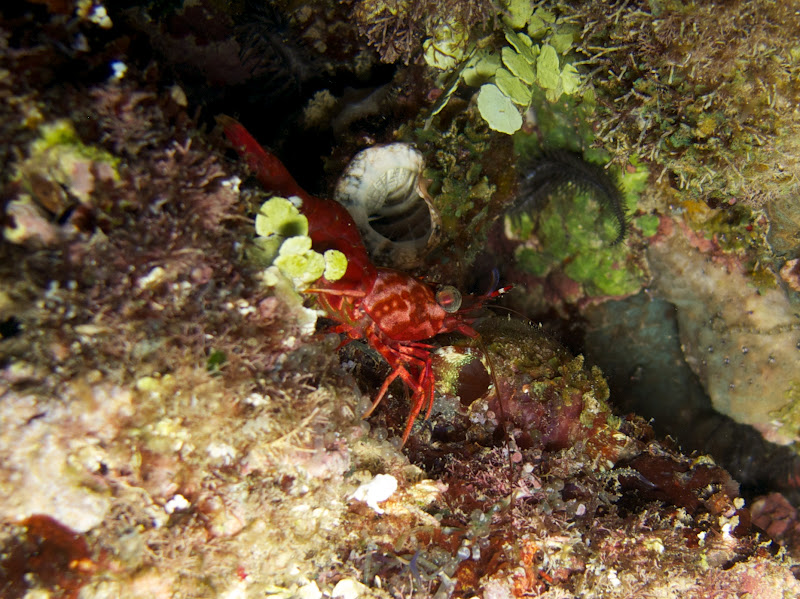 The last noteworth animal I spotted is a nudibranch but I have absolutely no idea what species it was.  I’m pretty sure it’s some sort of Discodordidae…perhaps a Carminodoris bifurcata.  My photo isn’t good by any means.  I was swimming at a quick pace to catch up to the group (James was kicking a little too fast for me) and didn’t have time to take many photos…only one in fact.  I’m hoping someone can help me figure it out…we shall see. 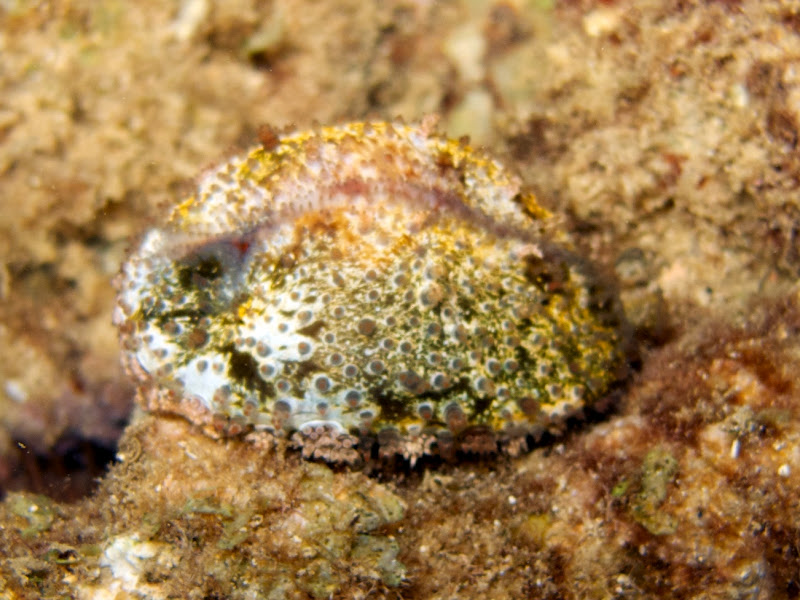 At the conclusion of our dives at Ark Dive, my students were certified night diver specialist.  I would totally go back out with this group because they displayed good buoyancy (always a bit more difficult at night), stayed close to their buddies and followed the dive plan without being reminded, and managed their air consumption excellently.  Great job to everyone involved!