Kenderick, James, and I stayed for one more dive at Maeda Point after the class dive wrapped up.  We were totally digging on our first dive and wanted to see if there was more to discover if we went out again.  We changed direction and went southward this time and it was worht it because we saw several different eels and some lobsters (aka lobstas!!!).

Upon coming down the chain I noticed a red sea urchin resting on the rocks.  For whatever reason I happen to see these more at night than during the day…probably because I can only focus on the small area inside my dive light.  As I came down to take a photo I noticed a shrimp-like creature resting on one of the spines. 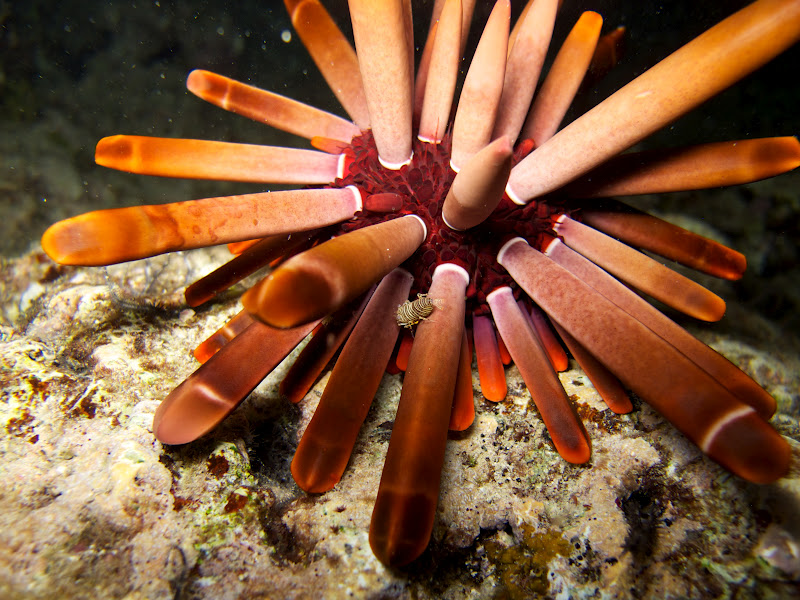 The below picture shows a little more detail than the one above.  I’ve posted in several forums asking for some help to identify the little critter.  One of the great things about night diving is that I can really focus on all the little details.  I probably would have passed right over this during the daytime. 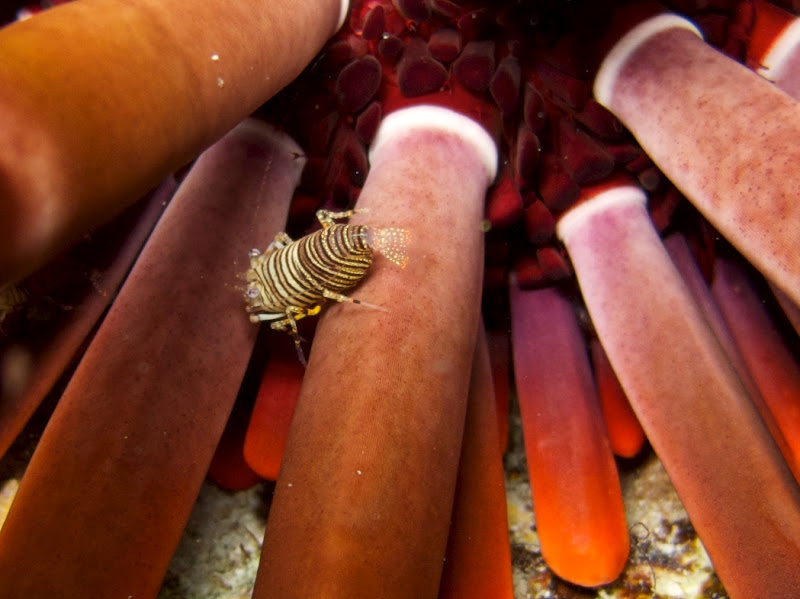 Right near the red sea urchin there were some honeycomb coral crabs nestled together.  I adjusted my buoyancy so I could hover over the coral and then I started taking photos of the crabs.  As I photographed them, they snapped their claws at me.  i could have spent my entire dive watching these little dudes but James and Kenderick were kicking ahead of me so I stopped and swam off to catch up with them. 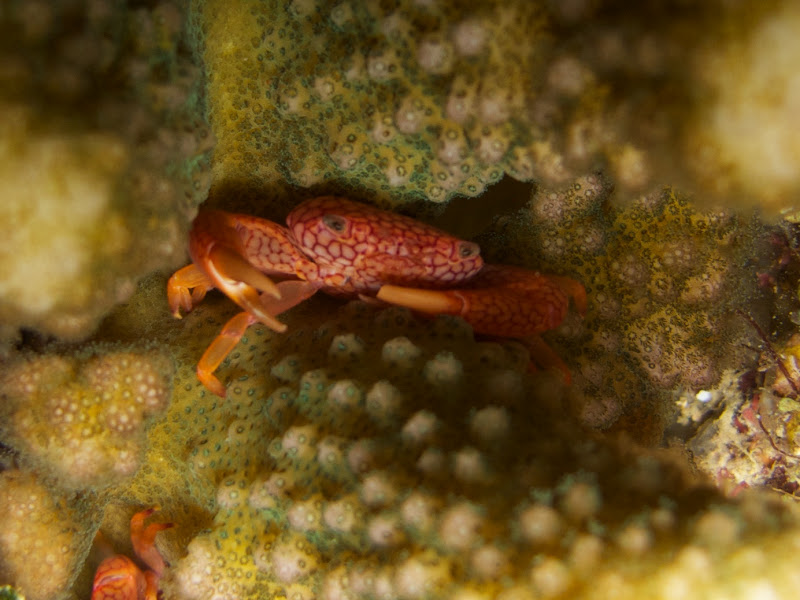 James and Kenderick were about 5-10 feet below me so we covered more area in the hopes of seeing something.  As I came to a deep cut in the coral I noticed a crab trying to hide from my flashlight.  I turned my light away from it and slowly moved closer with my camera prepped.  As soon as I came upon it I started snapping away.  After 5 photos I signalled to James and Kenderick to come over to take a look at the crab.  Unfortunately, by the time they swam over it had disappeared.  I just snugged when they got over and were trying to figure out why I had called them to my location.  Sorry guys! 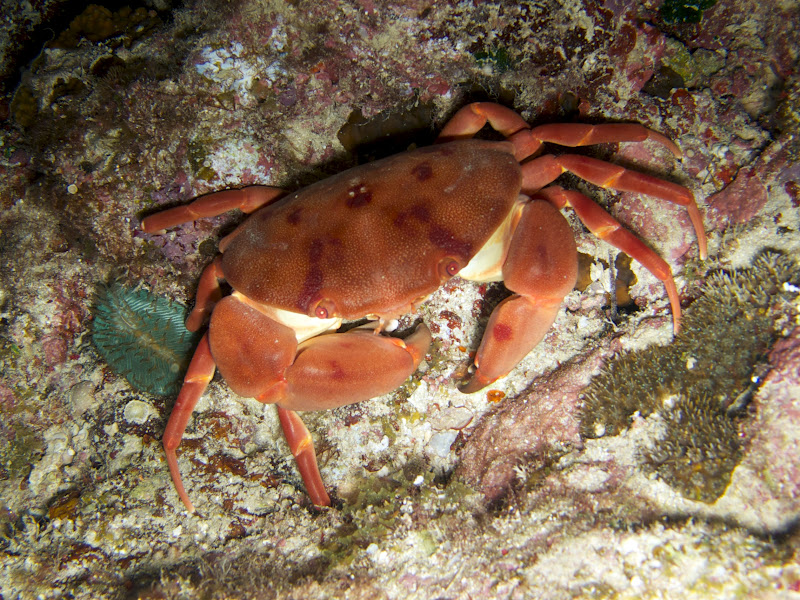 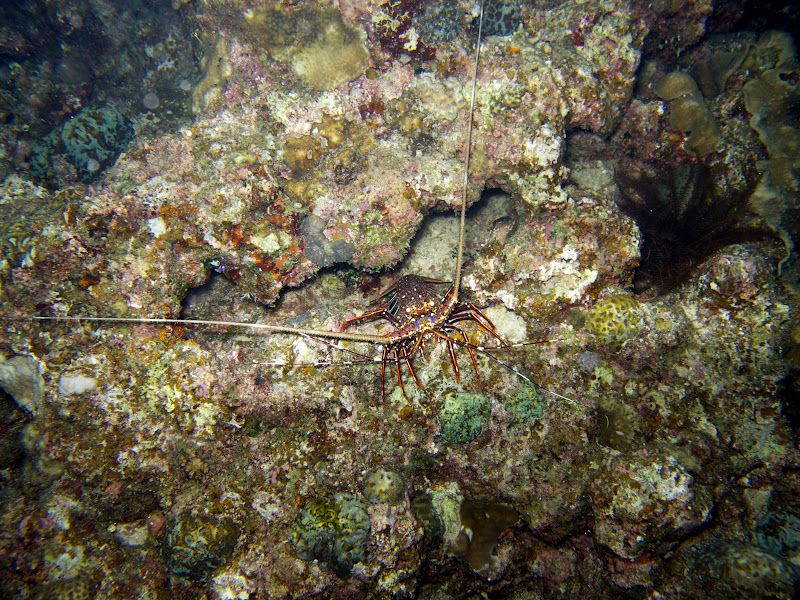 Lobster Hiding Out In A Crevice

James and Kenderick continued on ahead of me and soon James was flashing his light.  I knew by his behavior he had found something good!  I quickly swam over and saw a huge crab with its antennas sticking out of the hole it was lodged in.  Wow…all I could think about was the several days I went lobster diving in California…only caught 1 lobster in about 15 dives.  I wasn’t aggressive enough compared to the other people on the live-aboard! 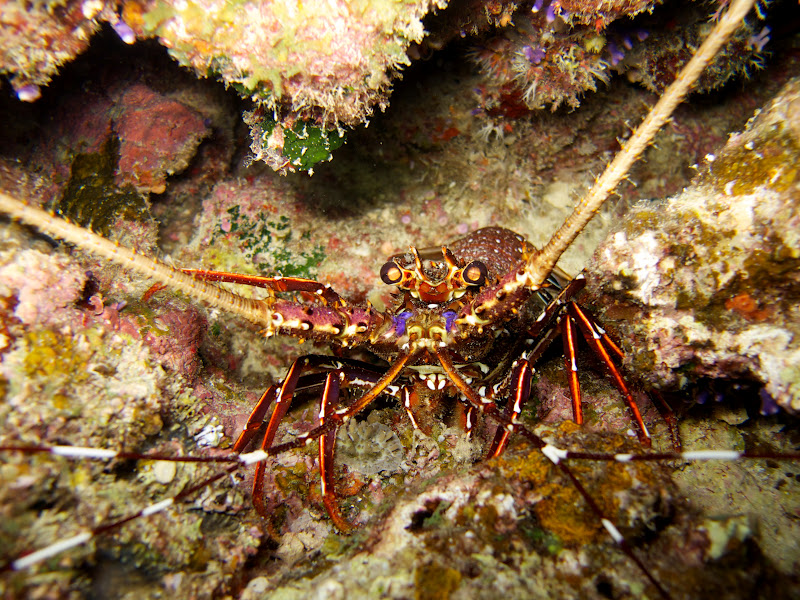 I slowly approached the lobster, fully expecting it to withdrawn into its hole.  Nope.  Think again!  It held its ground and I managed  to get “up close and personal.”  If only the lobsters had been this stupid in California I would have caught a whole bunch! 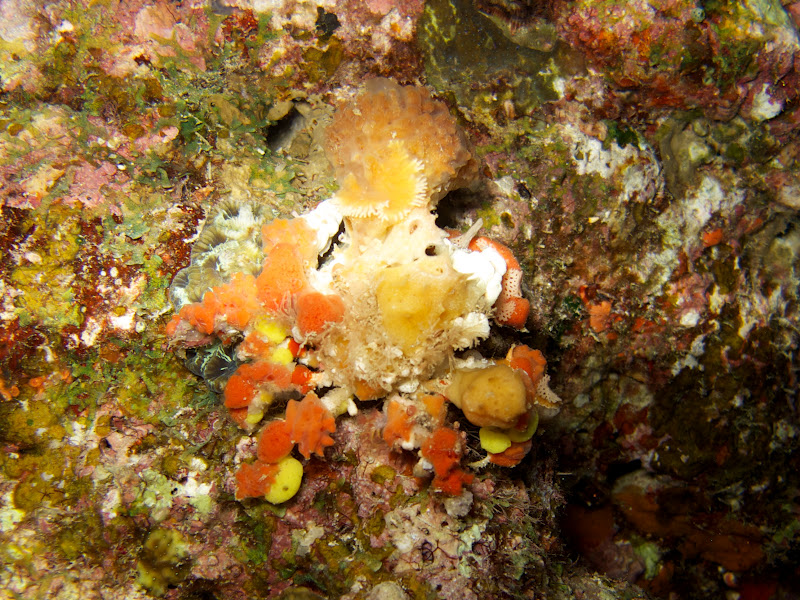 As we continued kicking southward we started to face a stronger and stronger current.  Eventually I felt as though I was kicking pretty hard and not going anywhere.  Too much work for me.  I signalled to James and Kenderick that we should turn around and the agreed.  We let the current push us back to where we had came from and we came upon some really cool animals along the way. 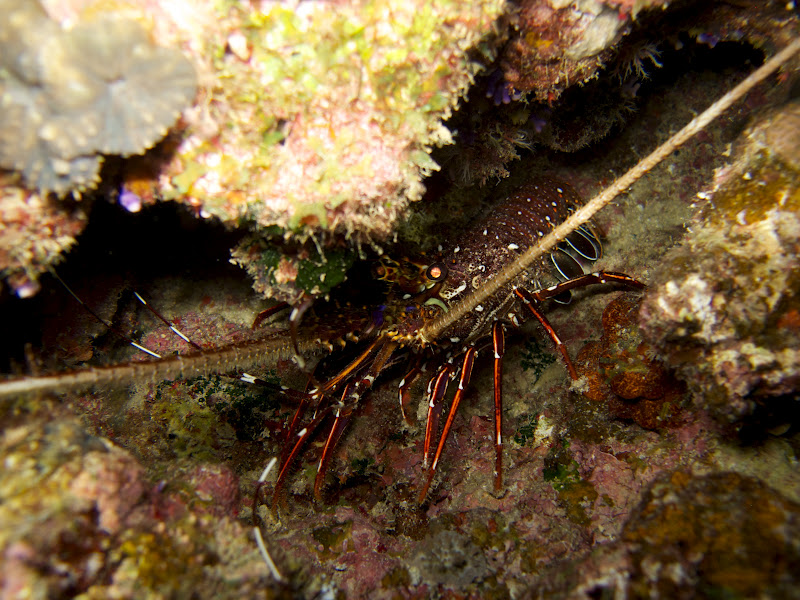 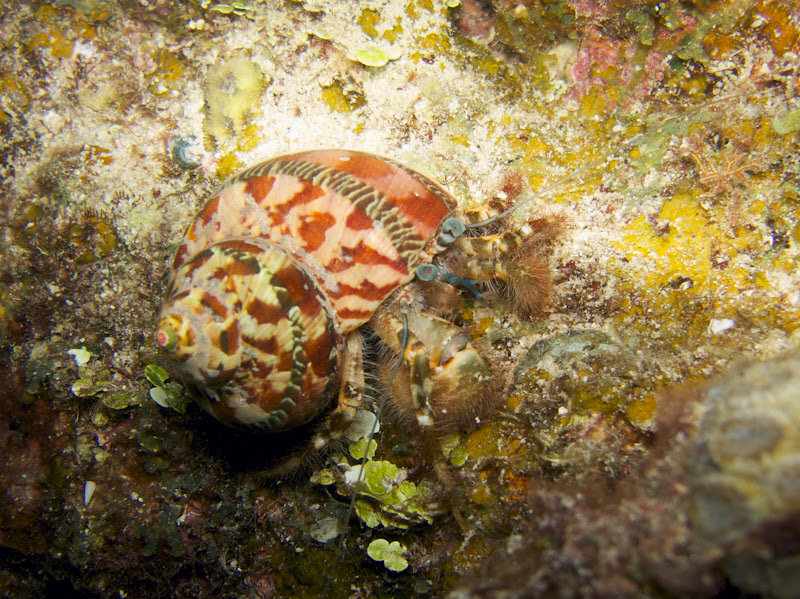 We also managed to find an eel I’d never seen before.  After looking in my fish identification book I’ve identified it as a Yellow-Headed Moray.  It turns out these eels are nocturnal so it’s no surprise its  taken me almost 300 dives to find one. 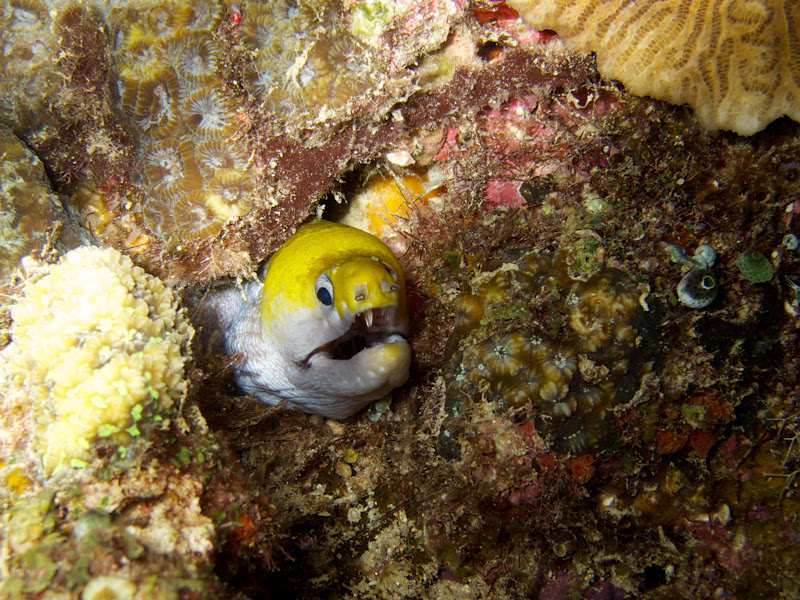 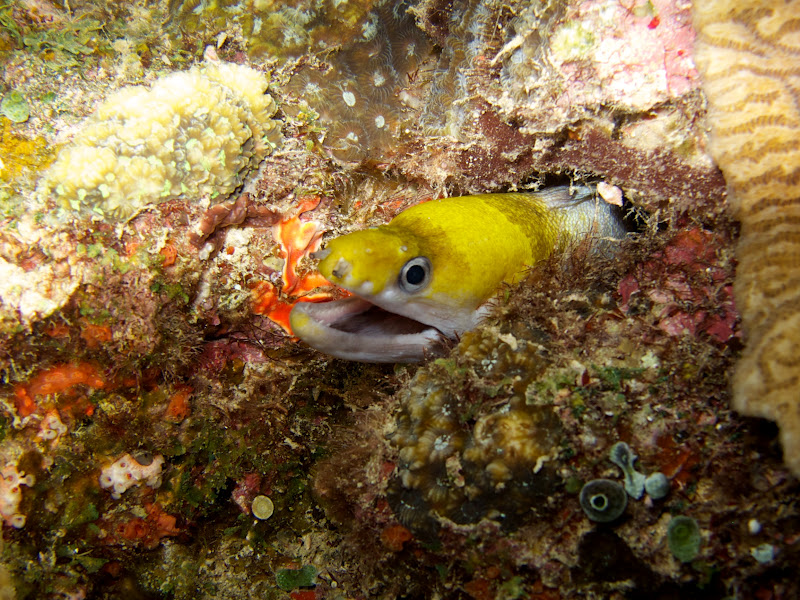 As we came into the area at Maeda Point that’s covered in gravel around 35-45 feet deep, we came upon another animal I’d never seen before, a sea hare.  Well…actually…I’ve seen sea hares in southern California but nothing as large as I saw tonight.  The sea hares in Cali were about a foot in length but the one at Maeda Point was easily 3 feet long. 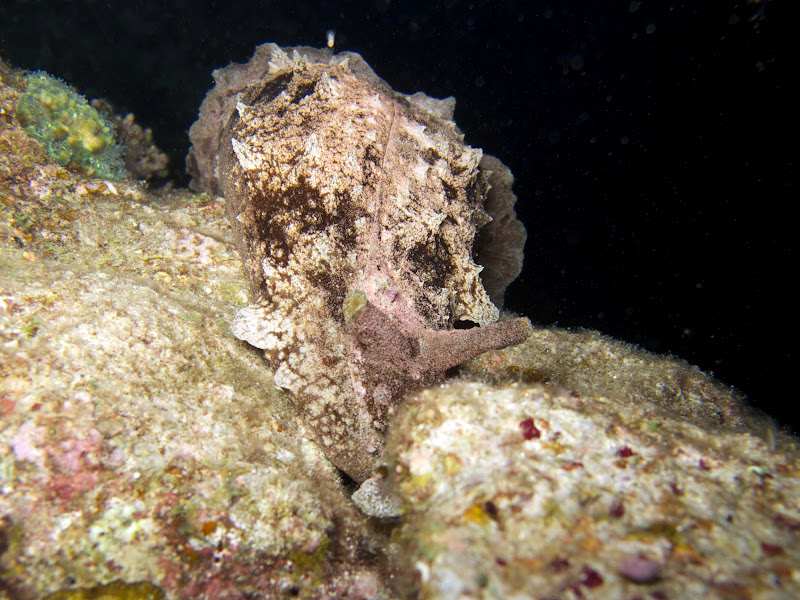 The sea hare was moving at a pretty good clip but I still managed to get some nice shots. 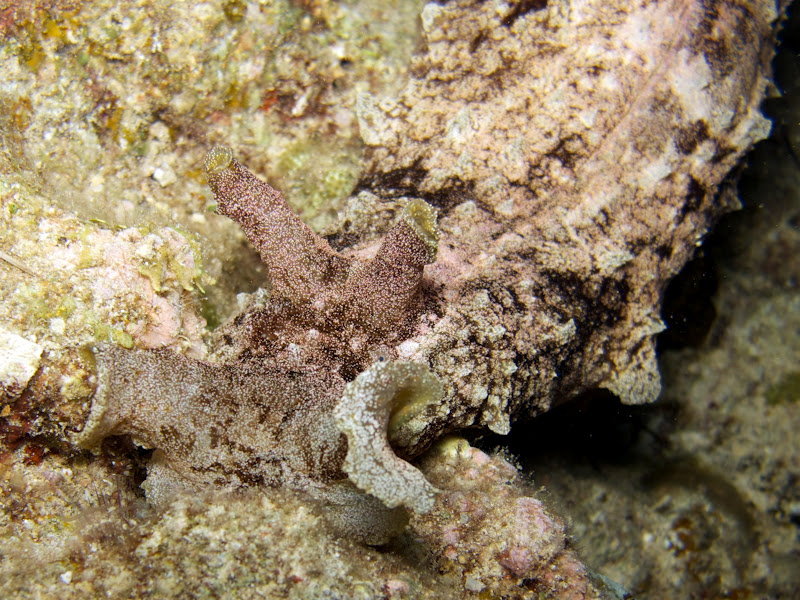 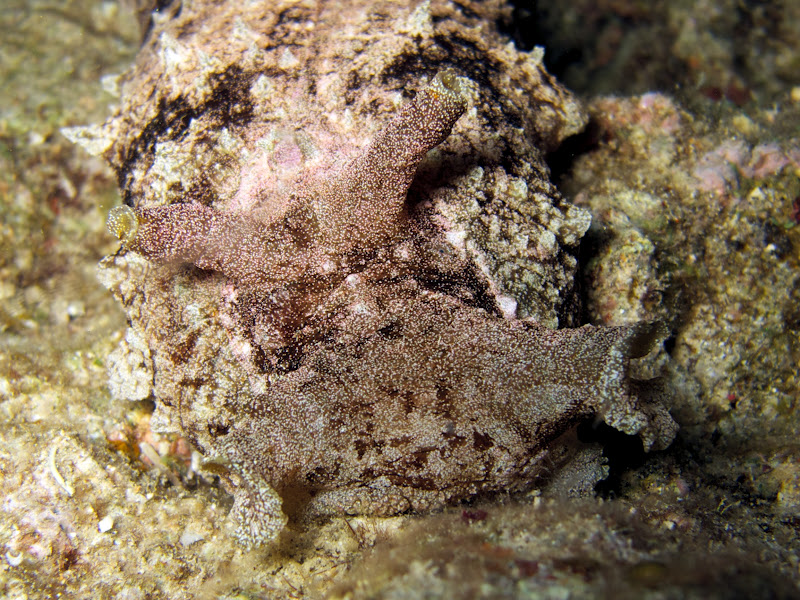 As we came into the area by the chain, I hoped to spot the octopus again but it wasn’t around.  I wasn’t disappointed though because I spotted another flatworm (unknown species).  I’m pretty sure I’ve seen it before but not very often. 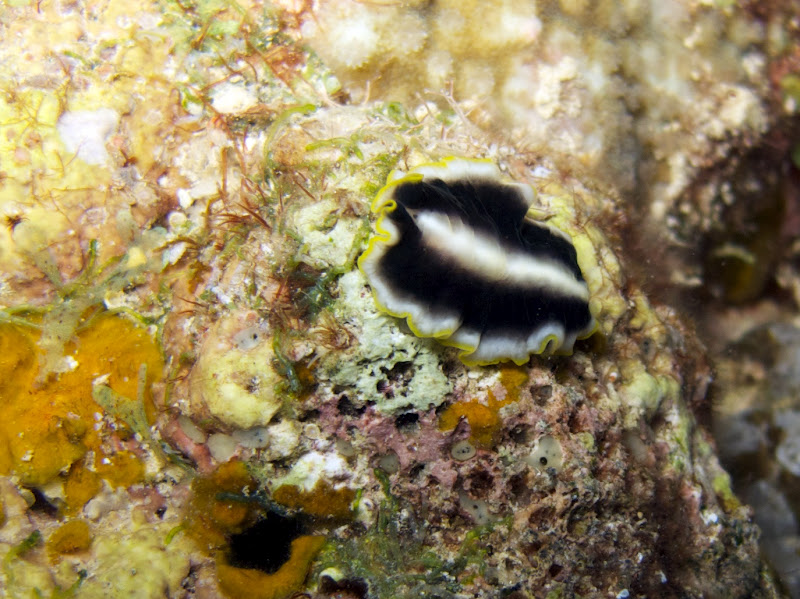 We also came upon several crabs.  The first was a bright, red hermit crab (absolutely love the colors in the below photo).  Instead of retracting into its shell, it actually posed for my camera quiet nicely. 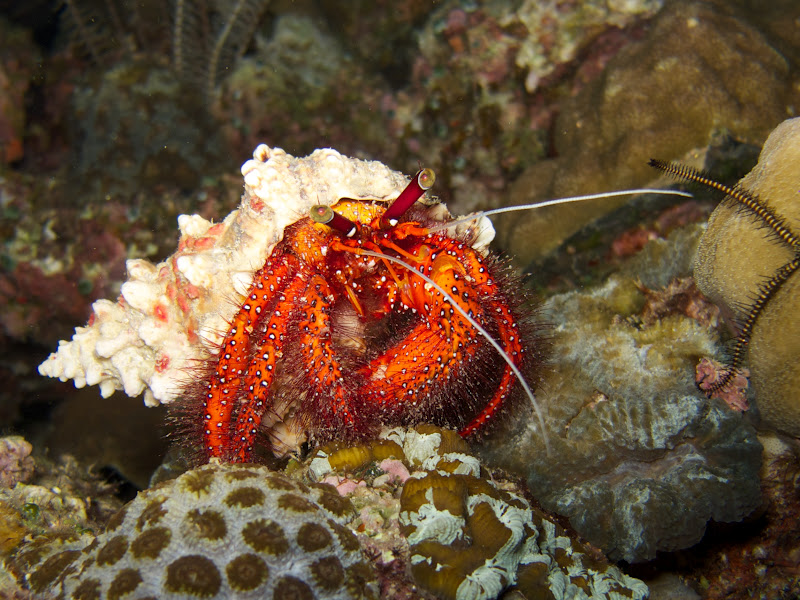 The decorator crab wasn’t as friendly as the hermit.  It kept walking away when I brought my camera down for pictures. 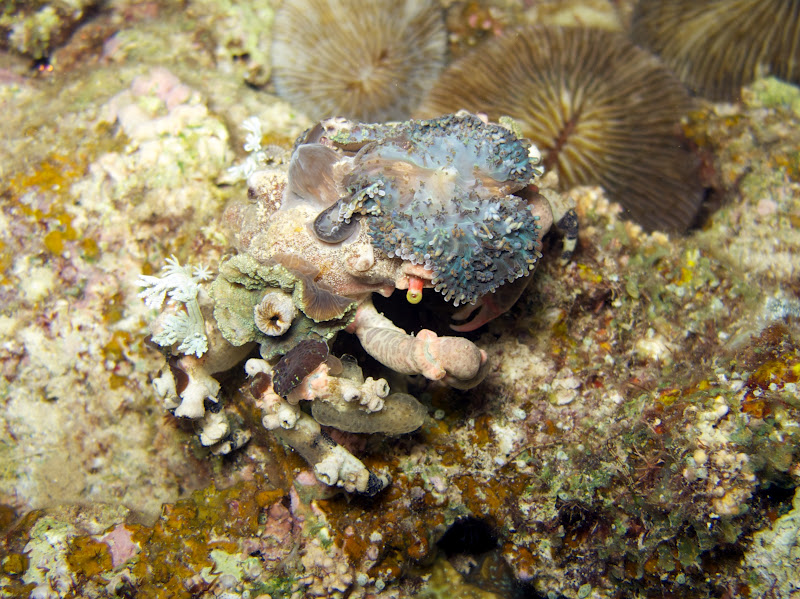 The Chromodoris Dianae nudibranch was still in the same spot as before so I took several more photos.   Eventually I need to figure out how many different species I’ve seen….. 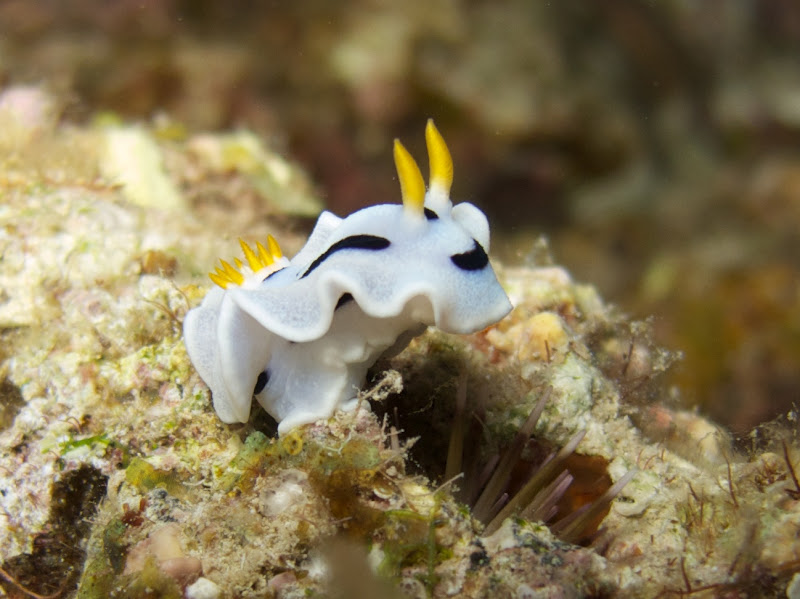 Directly beside the chain there was also a black-saddled toby sleeping on the rocks.  I got up nice and close and he didn’t even move.  I love it when I find fish sleeping because it’s so easy to take pictures.  Winning! 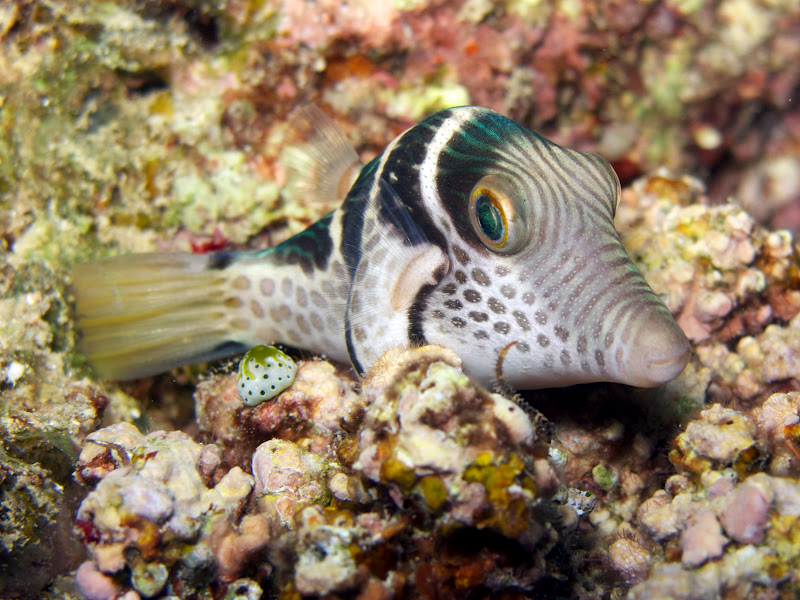 Our second dive at Maeda was just as awesome as the first.  I’m hoping to get back out and explore to the southern part more.  Those lobsters were pretty cool and so was the yellow-headed eel.  I’m sure there are some other really neat animals to see out there.