For our last dive in Guam, James and I decided to relax and have some fun.  Because we had been diving like crazy, we decided to make the dive to only 40 feet for no longer than 40 minutes.  Surprisingly, we managed to find some really cool critters and a huge anemone even though we thought we knew the site fairly well.  They were great discoveries.

After kicking out to where the reef wall dropped off, James and I descended and immediately came upon a HUGE anemone with lots and lots of Clark’s Anemonefish.  While James was securing our dive buoy/flag, I started snapping photos of the great discovery we had happened upon.    To my delight the anemonefish weren’t very scared of me and I was able to get several nice photos. 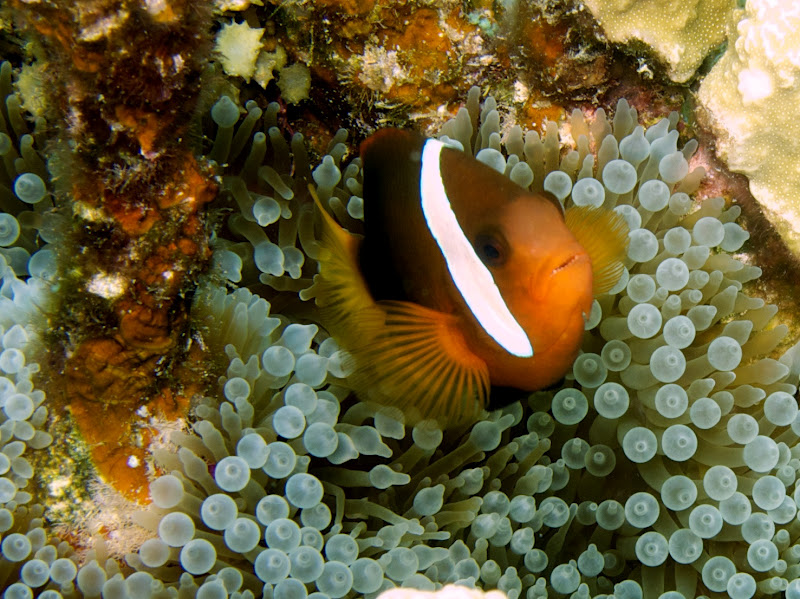 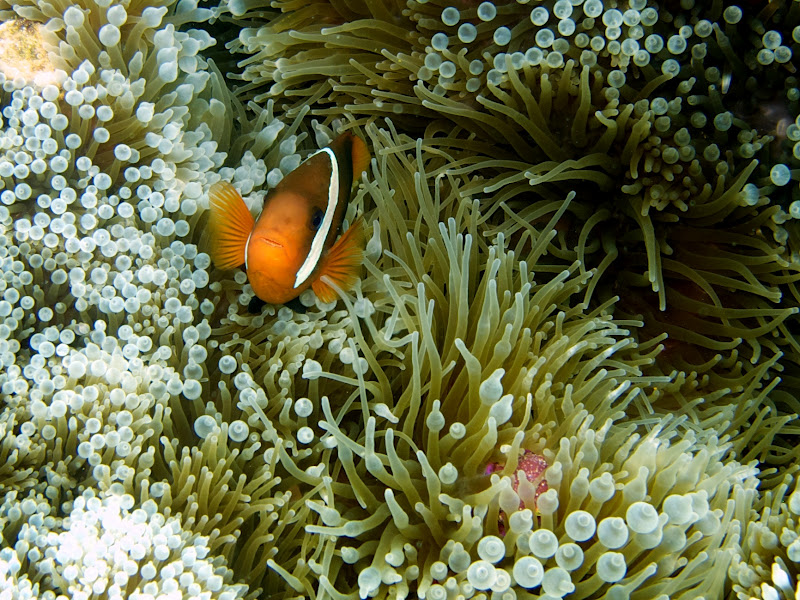 As you can see in the two photos below, the sea anemone was gigantic.  I would estimate that there were at least 20-25 Clark’s Anemonefish swimming through it. 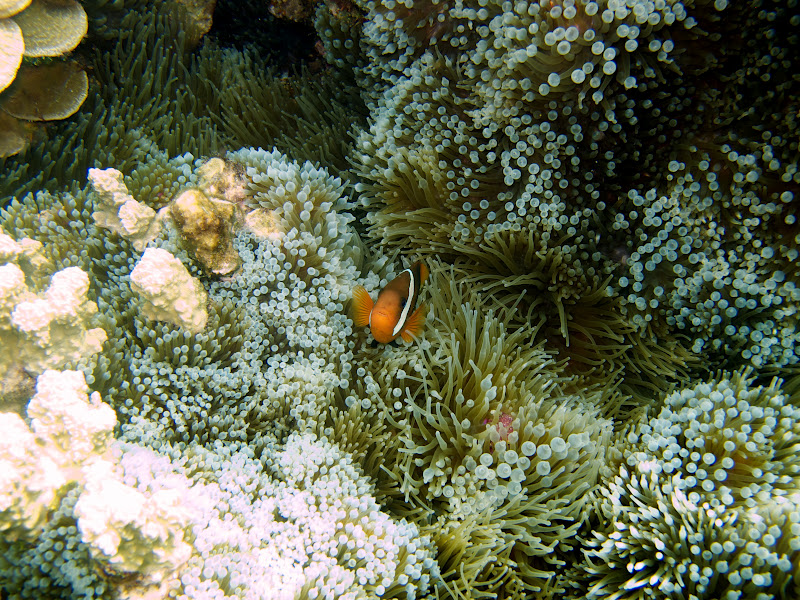 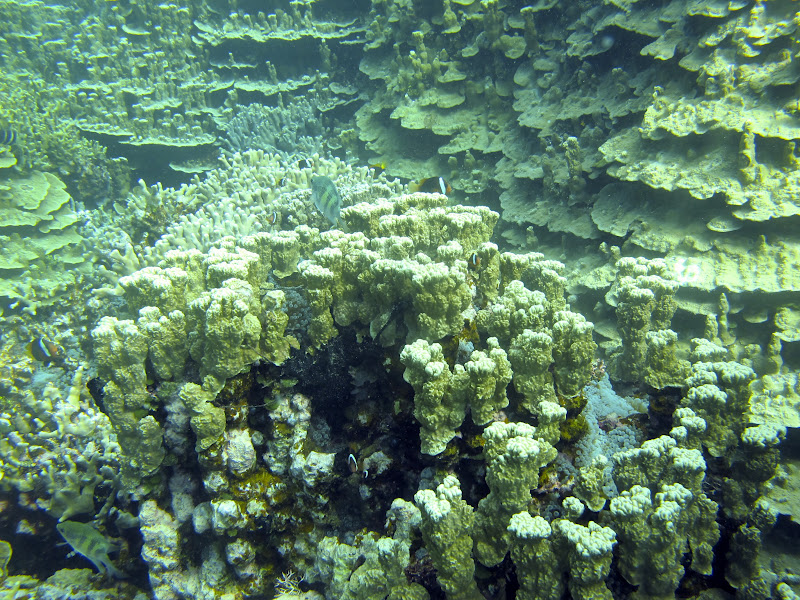 In total I would estimate that the sea anemone was about 5 feet across and 10 feet deep.  It was pretty cool seeing the anemone growing around the coral too. 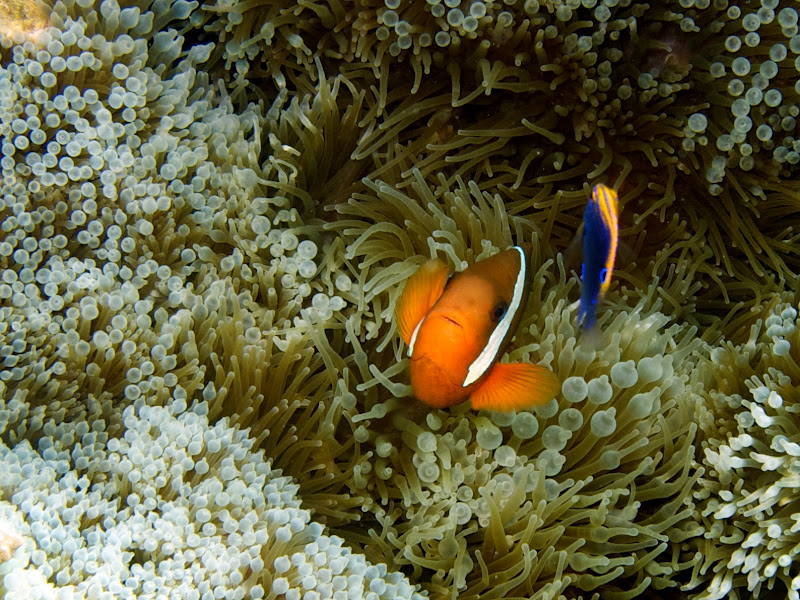 While I spend the majority of my dive looking at the reef, James swam by and provide some moments of hilarity with some of the poses he was making underwater.  I managed to get some good shots capturing his goofiness. 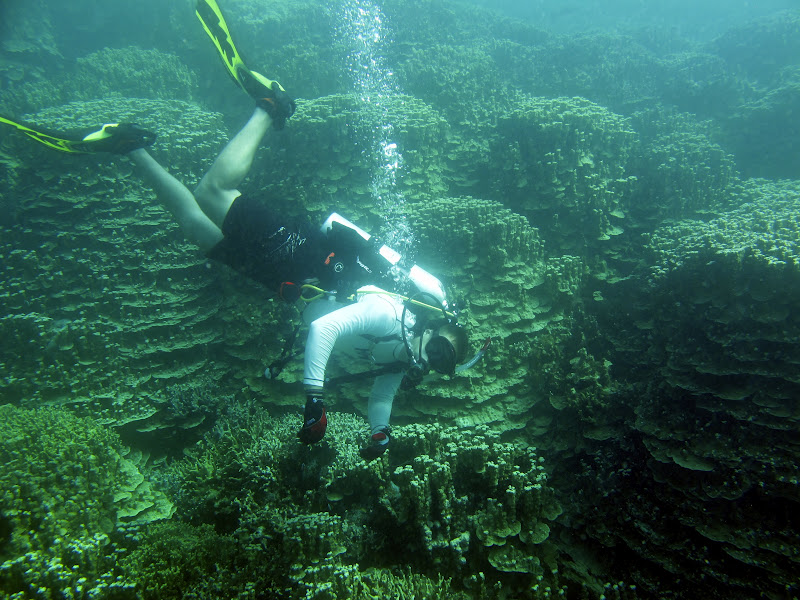 In the below photo I nearly spit out my regulator from laughing so hard.  We had just hit out halfway mark and James turned around to look at me.  I signalled that I was “OK” and all of a sudden he struck this pose.  I quickly took a photo and held my hand over my regulator so it wouldn’t fall out of my mouth from my laughter.  Anyone who knows my husband will understand why this is sooooo funny – he’s not very spontaneous so this is totally out of the norm. 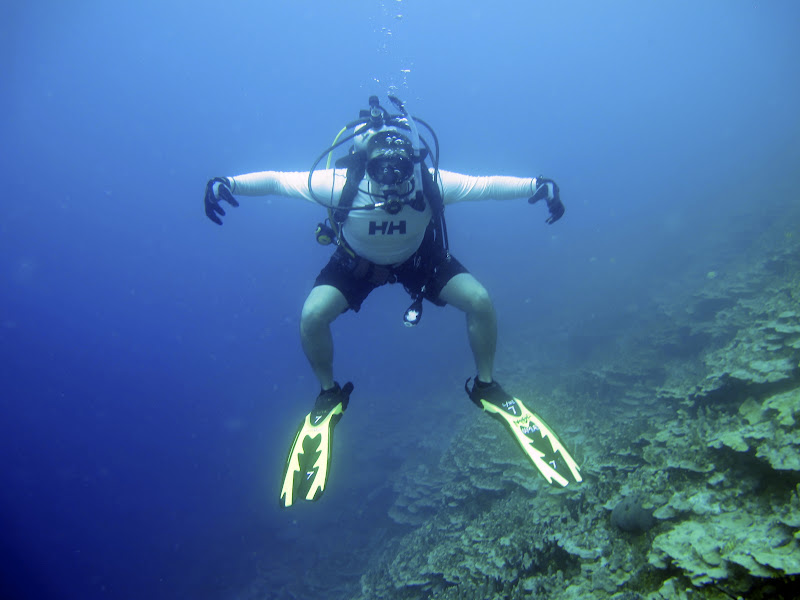 James Made Me Laugh So Hard With This Pose

At another point in the James swam overtop of me and then inverted himself and slowly descended to where I was peering into the coral crevices.  At first I was a bit startled when I saw his face pop out from above me and then became pretty funny. 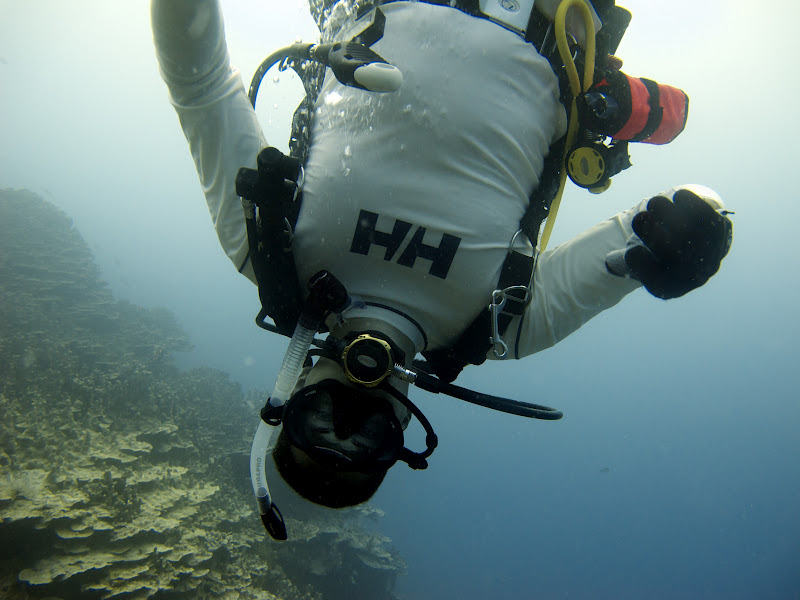 Besides the sea anemone and clark’s anemonefish, we didn’t spot many critter on the reef.  Then again I was also paying more attention to James than I was to the reef so maybe that’s why I didn’t see a whole lot.  Nevertheless, right near the end of the dive I came upon a Thuridilla gracilis nudibranch.  Throughout our dives on Guam this particular nudibranch really had me confused.  It looked like a flatworm that had rolled its body up so I had thus far been totally perplexed as to what exactly it was…nudibranch or flatworm.  Seeing this as my last opportunity to inspect the creature, I gently touched it with my gloved hand and saw the body “unroll” a bit.  I snapped a few pictures and was convinced it must have been a flatworm after all.  Once back home I referenced my nudibranch book just to be sure and was surprised to learn that it was in fact a nudibranch.  Seems as though I still have lots to learn about this little creatures! 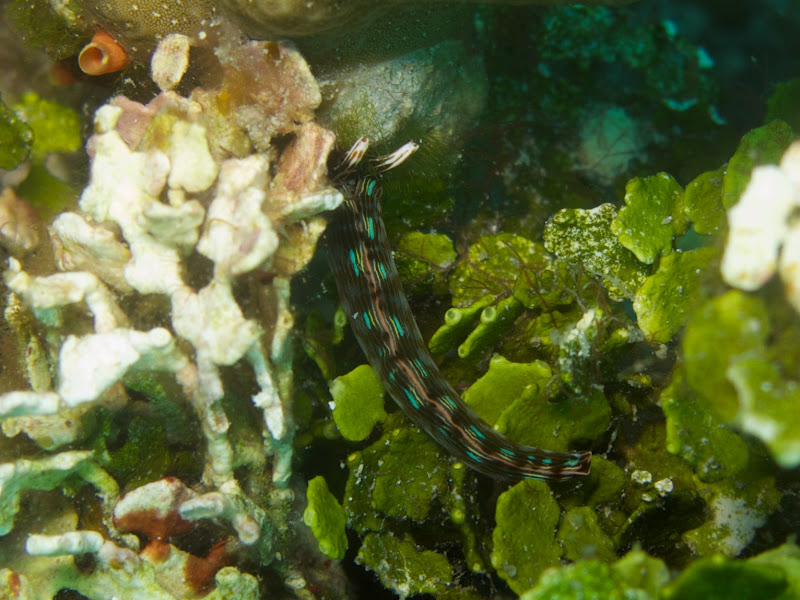 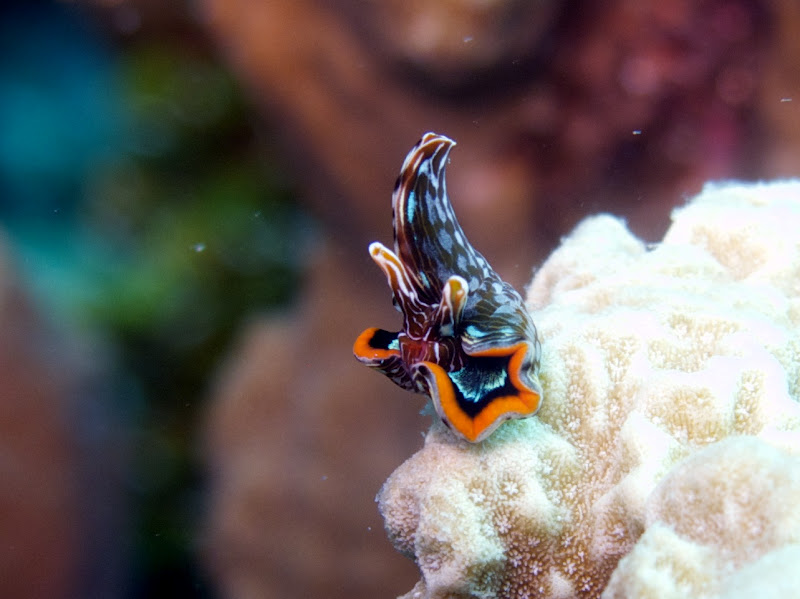 We also came upon an area n the reef where there was a section of rock completely clear of any plants or coral.  It was pretty weird to see a completely shear rockface.  I handed off my camera to James and went over to sit on the rock.  James took some photos and then I carefully moved off the area making sure not to touch the coral surrounding me. At the end of our dive we swam in over the reef in very shallow water, and then I started to poke around in the sand in the hopes of finding something.  James waited for me by relaxing on the sandy bottom.  After a few minutes of looking under some rock ledges I turned around to see James looking like he was about to fall asleep underwater.  Once again, I started laughing at James’ goofiness. 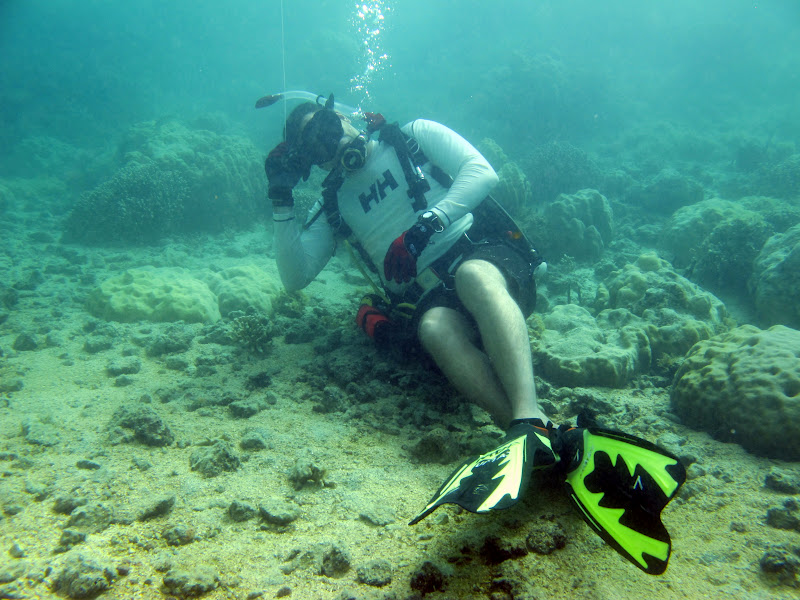 James Relaxing On The Sandy Bottom

Just like our other dives, we came to the concrete slab near the staircase, and I took a few more pictures of the cute jeweled blennies nearby. 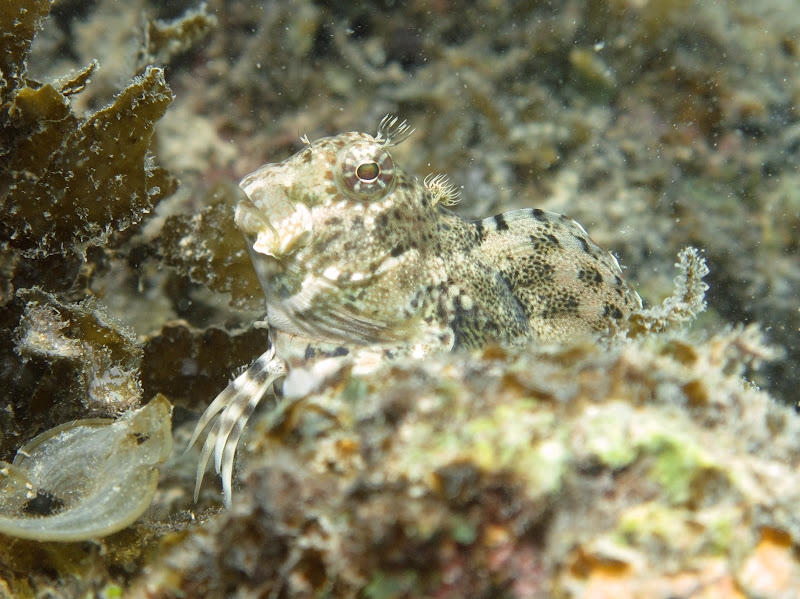 Diving in Guam was absolutely awesome.  The visibility was better than Okinawa – on average it was 60-100+ feet.  The water was also warmer so it was very comfortable for me (I normally get cold very easily).  In general, there seem to be more fish in Okinawa but Guam is known to have larger animals like manta rays and sharks.  The coral seems to be much more lively and well maintained in Guam.  James and I are hoping to go back in the near future to check out some more of the wrecks in Apra Harbor and also see if we can spot the larger wildlife.