Our dive at Western Shoals inside of Apra Harbor turned out to be a great dive!  We stumbled upon a HUGE anemone that was home to lots of tiny, translucent shrimp and we also saw a very angry octopus (and rightfully so!).

James and I jumped into water which was about 10-15 feet deep…I was a bit surprised how shallow it was.  We kicked away from the boat and descended down to where the reef was 25-35 feet deep. 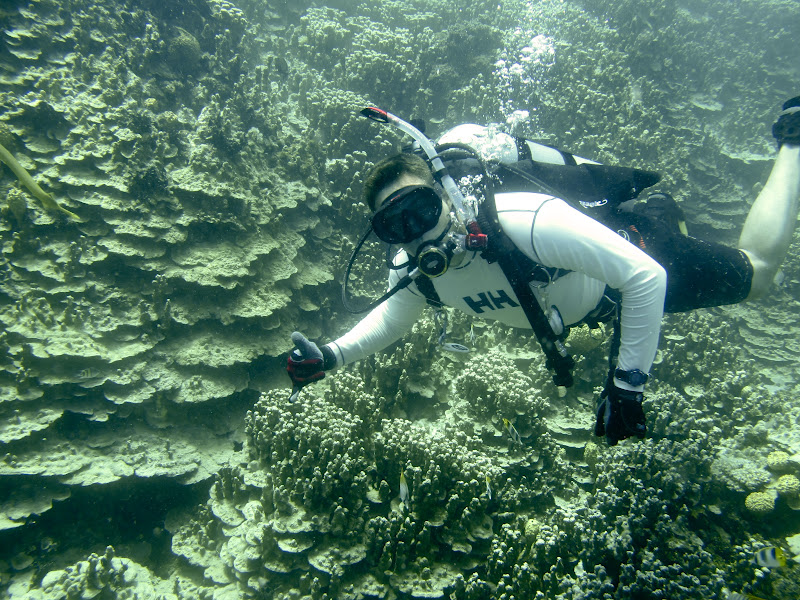 Seeing that there were no definite navigations features to the site, James and I decided to kick along the reef outcroppings following a rough compass heading.  At first the dive started pretty slow but eventually we started finding some anemone plants and other fish. 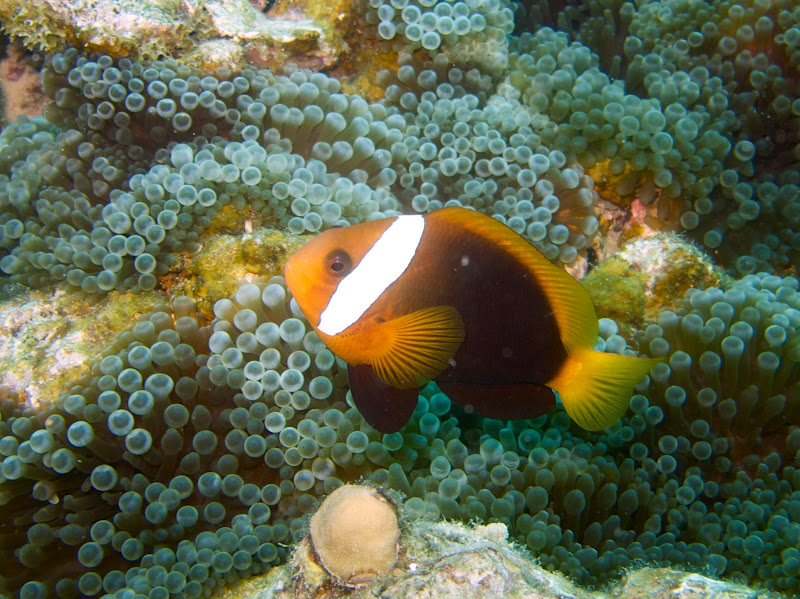 While kicking along a very brave and/or curious trumpetfish came over to me.  I thought he’s make fore a good head-on photo so I started snapping away.  After my first picture, the trumpetfish unexpectadly opened its mouth at the exact moment I hit the shutter button.  When James and I surfaced at the end of the dive we both got a good laugh out of the photo.  I’ve only seen trumpetfish open their mouths a few times when I’ve seen them diving so I’m pretty pumped I was able to catch a photo of this behavior in action. 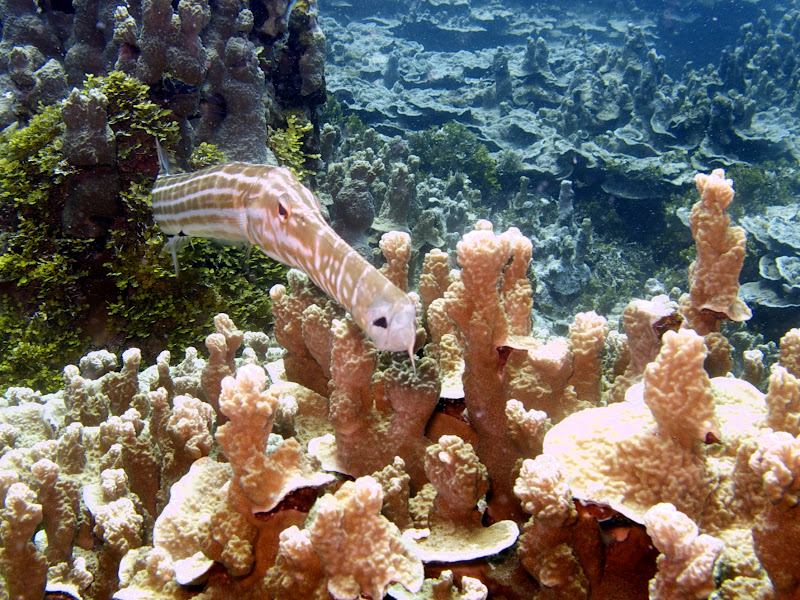 Trumpetfish Checking Me Out 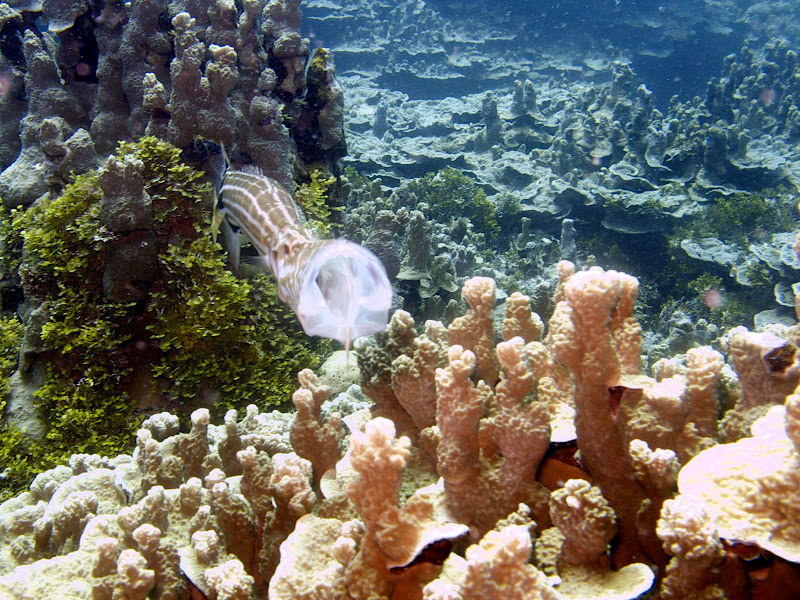 Trumpetfish With Its Mouth Wide Open

After enjoying my photo-op of the trumpetfish, James and I continued kicking further on.  To our great delight we come upon a HUGE anemone with lots of pink anemonefish swimming around inside.  However, I wasn’t too interested in the fish because as I looked closer at the anemone I noticed there were TONS of tiny, translucent shrimp inside the tentacles.  Awesome!  These are kind of hard to find in Okinawa so it was as if I had found a goldmine.  Sweet! 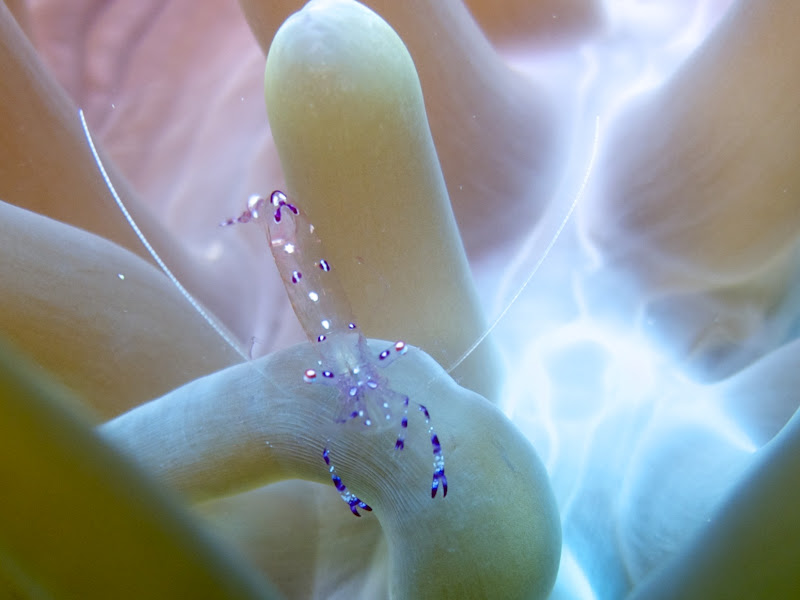 I motioned to James to come take a look and then started taking pictures.  Without a macro-lens it was extremely hard for me to get my camera to focus on the shrimp.  As my luck would have it though, the shrimp were not shy and they didn’t try to run away from me as I slowly moved my camera closer to get the photos I wanted. 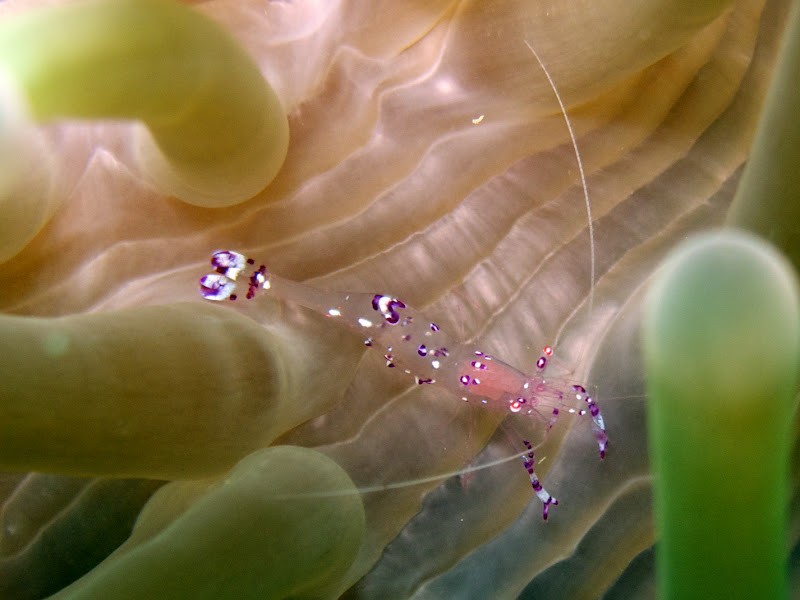 Tiny, Translucent Shrimp – Notice The Pink Sack Inside Its Body

I think the above photo is the best one I took out out the 20 photos that were taken.  The colors really pop out, the shrimp is in focus, and there is a pink sack inside the body of the shrimp that can be seen. In all of my other photos no pink sack can be seen. 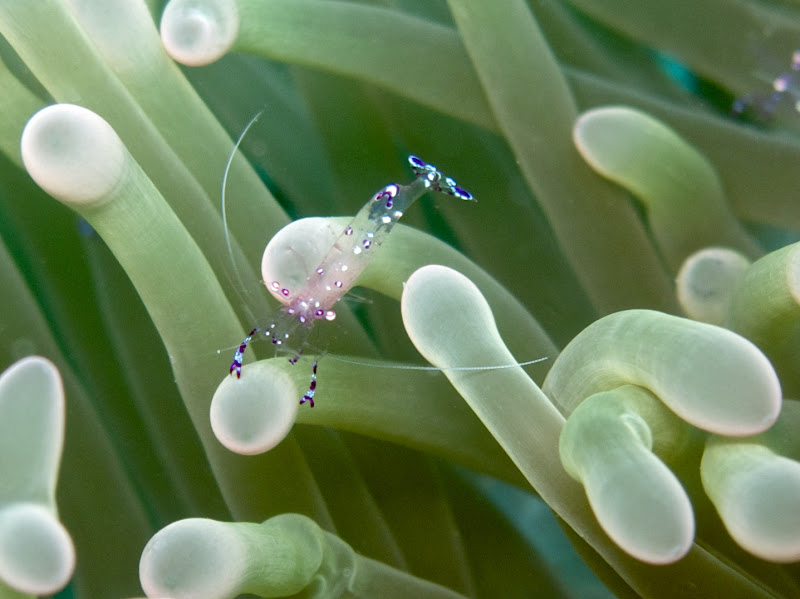 After getting to 1500 PSI on our tanks, James and I turned around and started heading back to the boat.  What awaited us was something I didn’t expect to see… 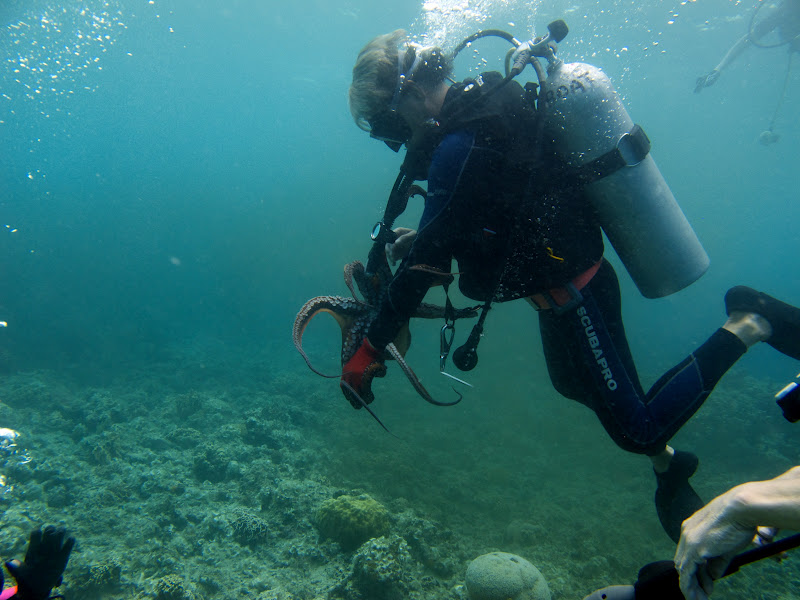 Dude Messing Around With An Octopus

As we ascended to 15 meet I saw what looked to be octopus ink in the water.  I motioned down to James to come over with me to explore what was going on ahead of me.  As we got closer we saw a man holding onto an octopus. 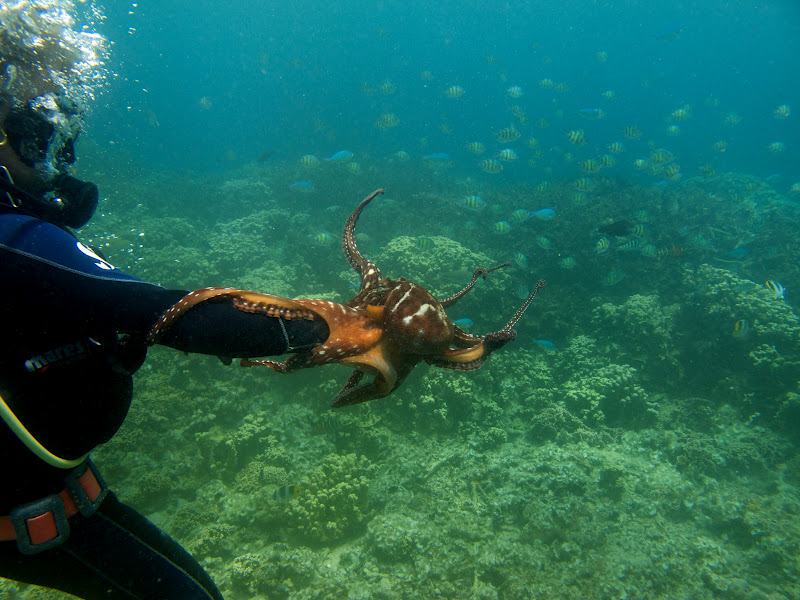 I turned around and motioned with my hands to James how displeased I was to see what was going on.  The octopus was trying to swim away and the guy kept pulling on its tentacles so it couldn’t get away.  When we got back onto the boat James and I spoke about how the dude was a total idiot for messing around with the octopus. 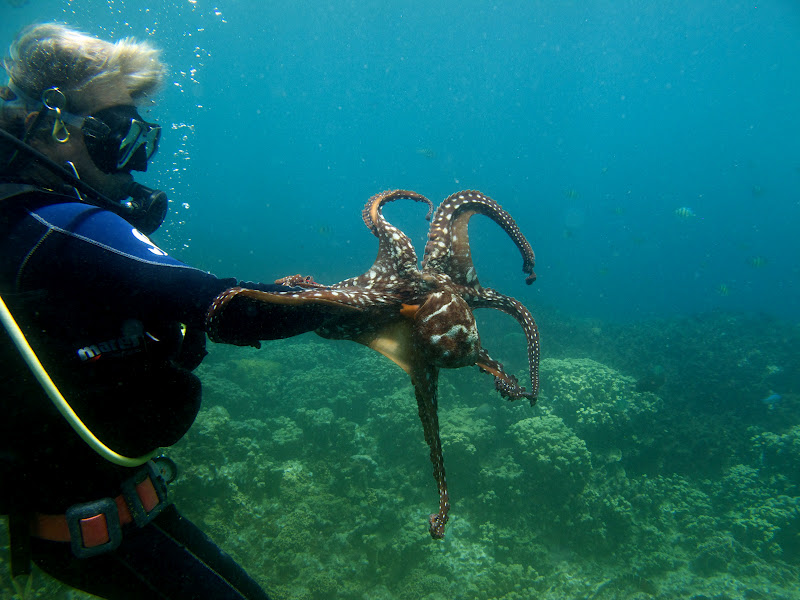 I’m not going to lie.  I totally wanted the octopus to bite the guy…that would have been even more awesome!  I snapped some photos of the whole event going down with the thought that it would make for some good training material for my dive students. 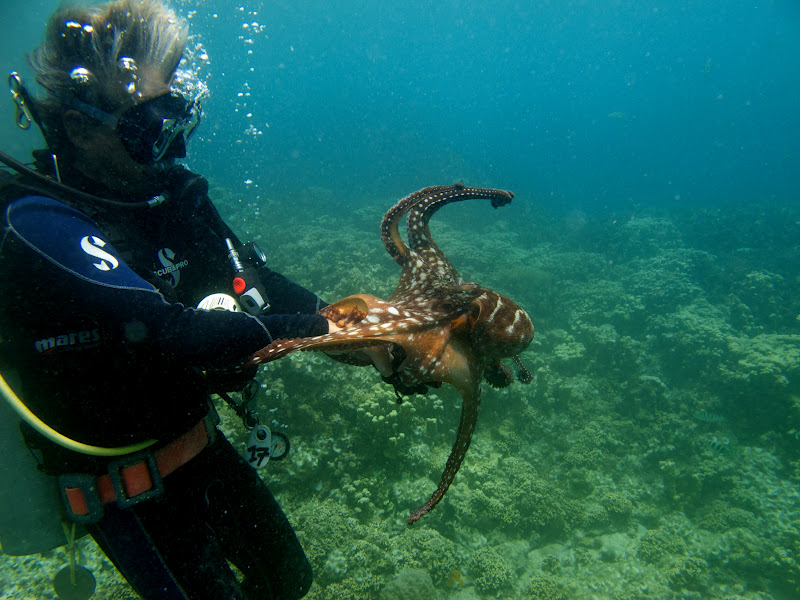 Eventually the guy tried to let the octopus swim away but it wouldn’t let go of his arms.  When he tried flinging it off, it then wrapped itself around his leg.  He ended up having to descend back to the octopus’ hole where it eventually let go and then made it’s escape. 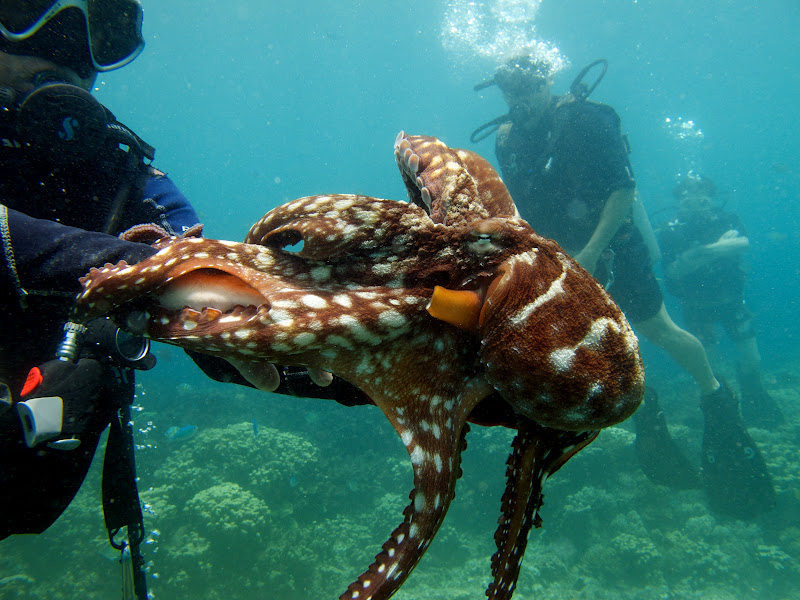 Octopus Latching Onto The Guy’s Arm

I managed to get one picture of myself with the octopus.  The dude that was messing with it gestured for me to give him my camera.  I’m still not sure why I handed it over but I did.  He ended up taking the below photo.  As you can see, I was totally shocked at what was going on in front of me. 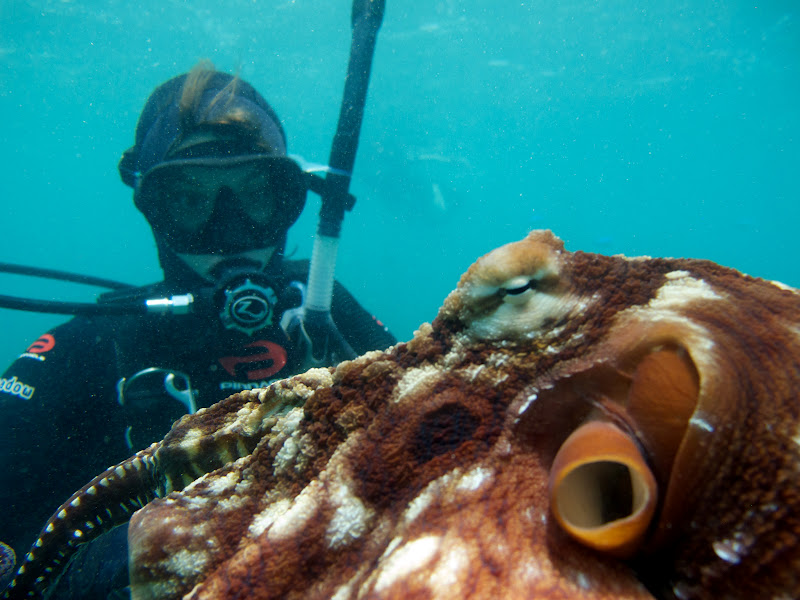 Me And The Angry Octopus