After an hour surface interval following our dive at The Blue Hole, James and I were back in the water.  This time the dive site was called Breakwater.  We basically started our dive just inside of Apra Harbor and then swam outside into the open ocean.  It was a pretty neat where we saw some blue coral, crabs, fish, and nudibranchs.

Just like our previous dive off the boat, James and I entered the water last.  It allowed us the opportunity to not feel rushed in making our dive plan and doing our checks.  We decided upon staying at a depth of no more than 35 feet deep due to our previous dive being rather deep.  We also took note from the boat that that we should stick close to the peninsula of the harbor once we made our way outside into the open ocean.  They warned that if we didn’t we’d drift into the channel leading into and out of the harbor, making if difficult and dangerous for them to pick us up. 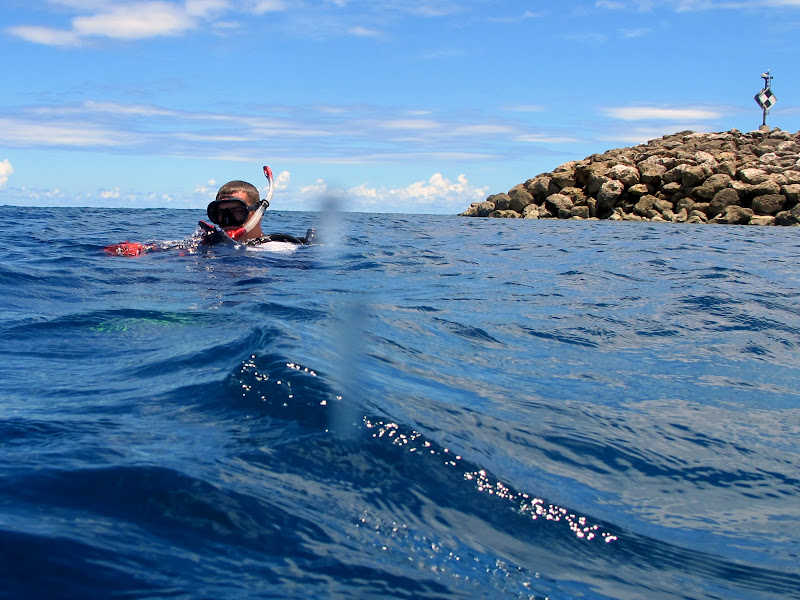 James Ready to Make His Descent

When we jumped off the boat all that I saw below were a bunch of rocks.  Some people would find large boulders and rocks to be boring but not me!  I was hoping to find some fish hiding amongst them.  When James and I were both ready, we made a slow descent and leveled off at 25 feet.  We found some wildlife in the rocks but it was nothing amazing or extraordinary.  Once we came out into the open ocean though it all changed. 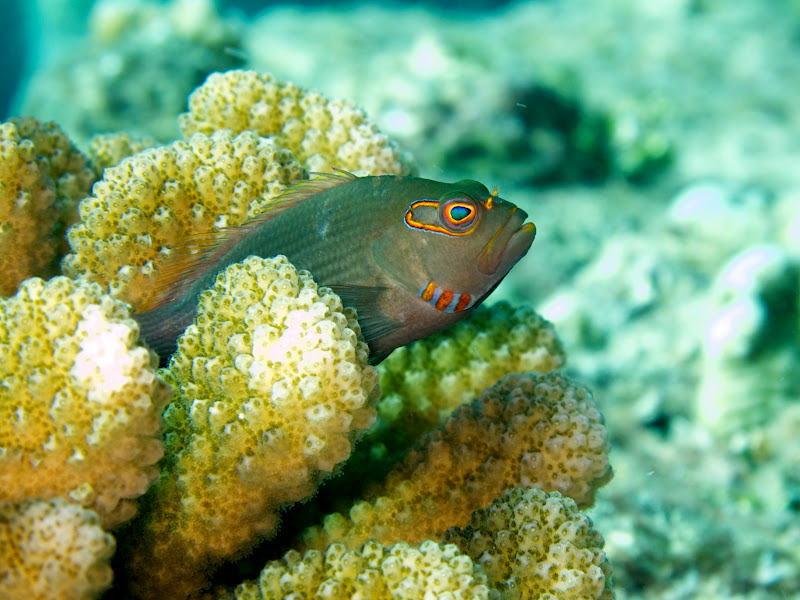 We stayed to the right along the rocks and coral and ended up having to kick against a light current.  The visibility underwater was pretty good – probably ranging from 70-80 feet. 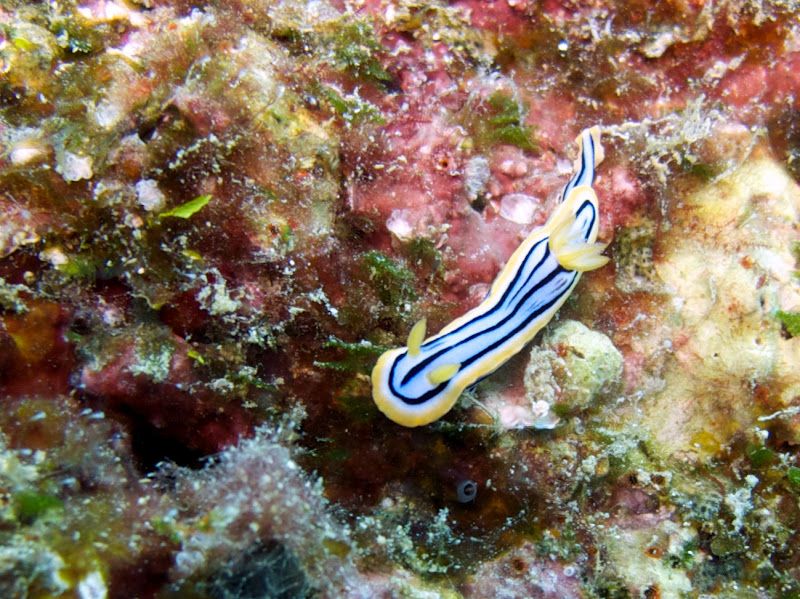 I was excited to find several nudibranchs on the coral.  The first was a Chromodoris elisabethina and the second was one I had never come across.  Unfortunately, it was extremely small so my camera wasn’t able to focus on it very well.  If I had a macro-lens it probably would have helped.  The unidentified nudibranch was probably the length of my thumbnail…very small to say the least.  After referencing Indo-Pacific Nudibranchs and Sea Slugs I have determined that it was Flabellina bicolor.  I wish my photos could have turned out better but I’m just glad theywere good enough to help me make an identification. 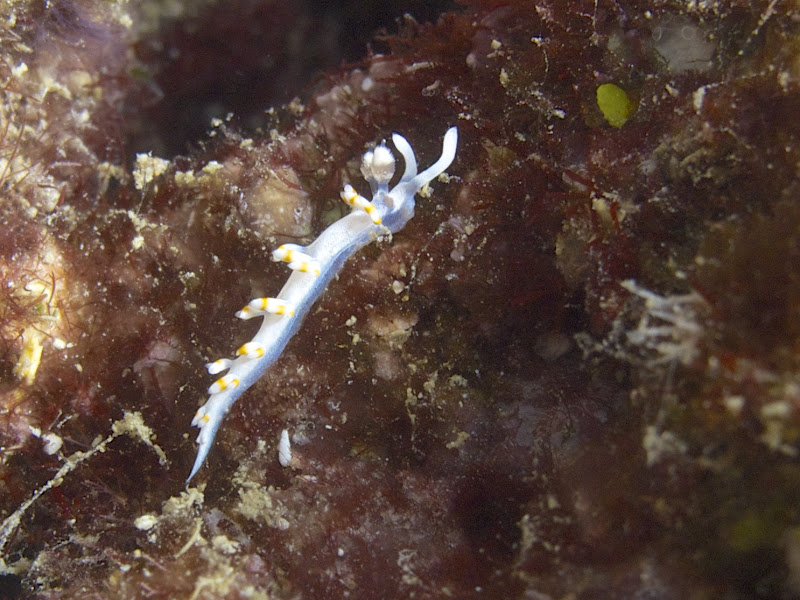 Because of the current and the fact that we wanted to maximize our bottom time, James and I moved methodically over the reef.  As I peered down into some coral I noticed some cute little crabs snapping their claws.  They were brightly colored with red spots and I knew they would make for some great photos.  It took me a few times to get my camera to focus on them but once it was locked on, my pictures came out very nicely.  I’ve see these crabs a few times in Okinawa but they seemed more prevalent in Guam. 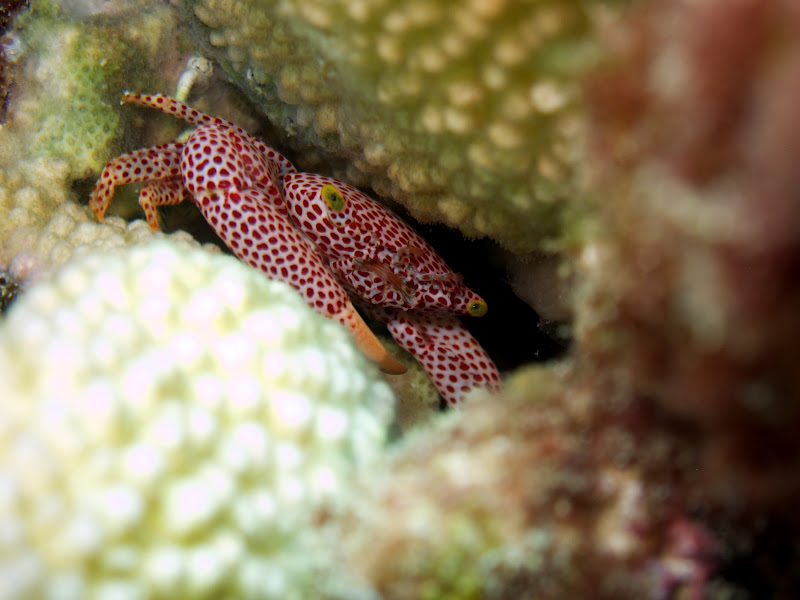 We also noticed a fair amount of fish nestled into the coral.  I suppose the use it for protection and also as a way to surprise their prey.  The fish would a bit more skittish than that crabs though.  After taking a single photo, most of the would dart away. 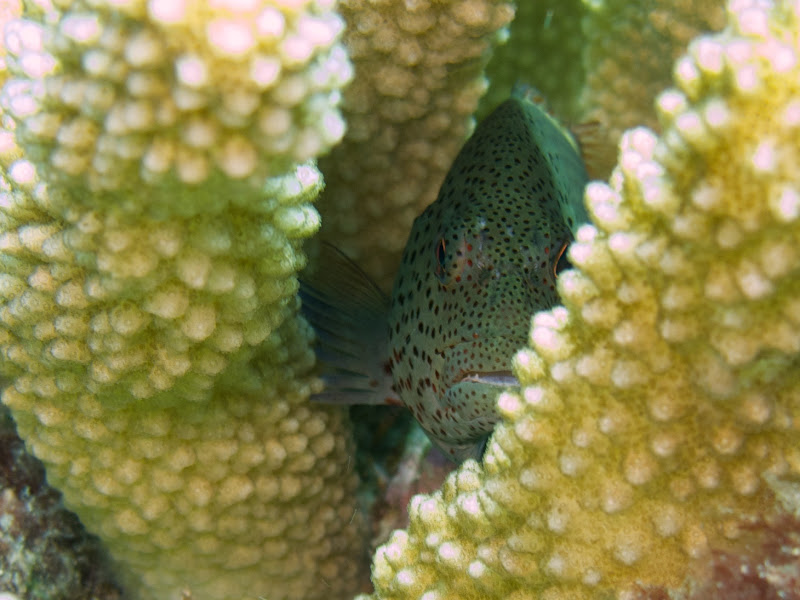 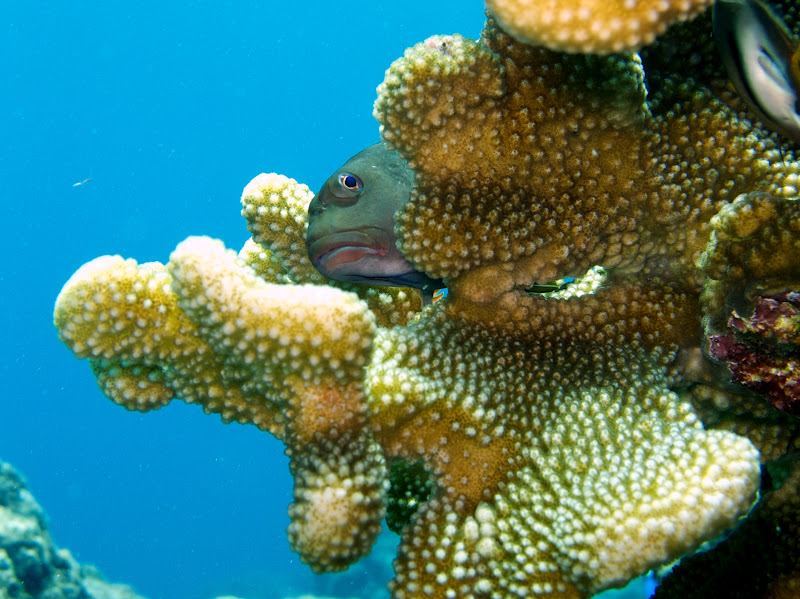 Peak under a ledge and there is a good chance you’ll find something interesting.  That’s exactly what happened to me when I made a quick look under some rocks.  I caught a quick glimpse of a crab so I spotted to take a better look.  Surprisingly, it didn’t move as I started taking pictures.  Because of its location, I ending up just putting my hand and camera into the crevice to get the photos. 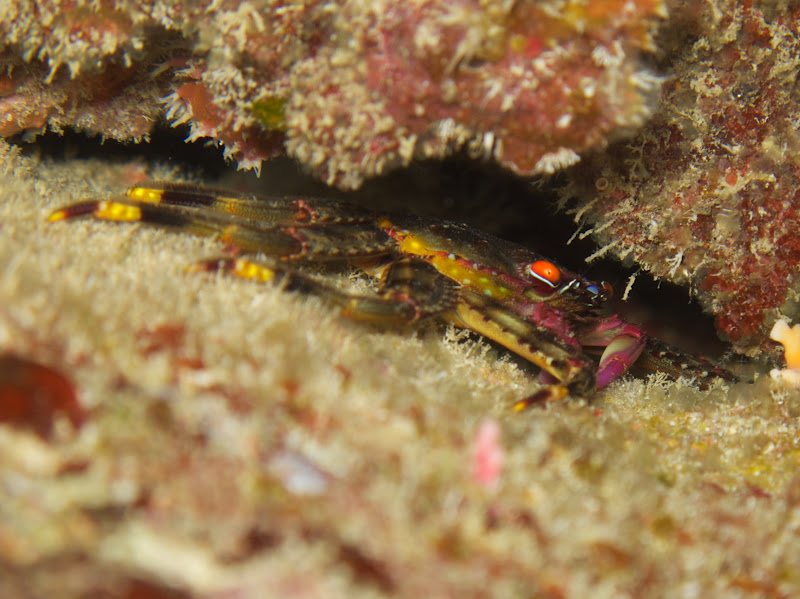 Crab Inside A Crevice 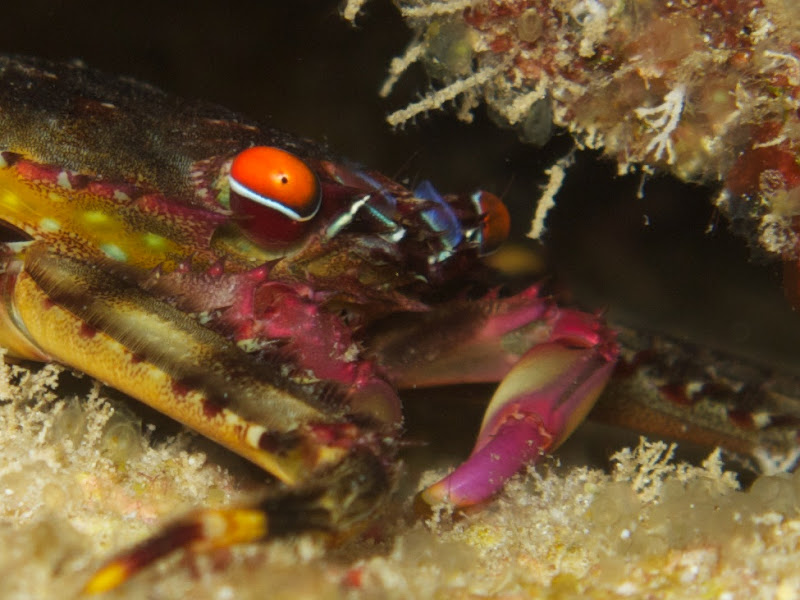 Close-Up Of The Crab

When I finished with the crab I looked up and saw another extremely small nudibranch.  This time it was a Pteraeolidia ianthina.  Just like before, my camera had a hard time focusing on the nudibranch.  Luckily, I was already familiar with this species due to the fact that its also found in Okinawa. 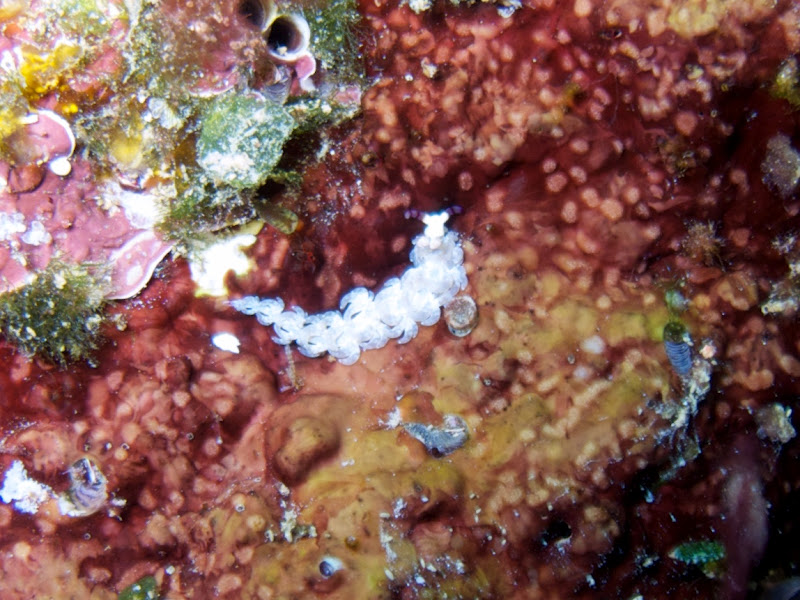 About 10 minutes from the end of our dive, we noticed that everyone was heading out to the open water.  We figured we might as well follow them.  It was still very shallow and there were coral outcroppings in the sand.  Even though we still had plenty of air to continue our dive, we noticed that everyone started heading up for the boat.  James and I continued our dive for an additional 5 minutes and then James began inflating the surface marker.  As we made our safety stop, the boat circled in closer and when we came up to the surface we made a quick exit out of the water. 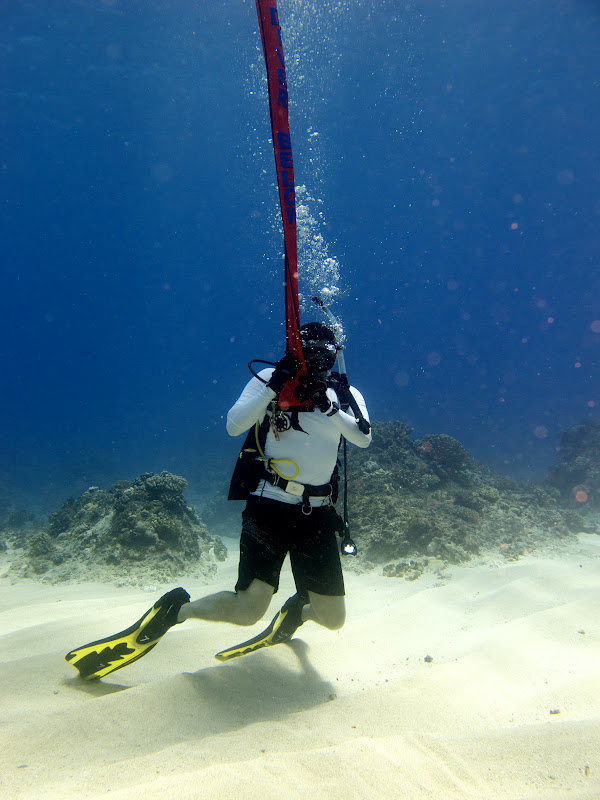