Our first boat dive with Micronesian Divers Association (MDA) was to a site called The Blue Hole.  We didn’t see much as far as wildlife goes, but James and I had fun making a deep dive to 90 feet and the visibility was amazing!

With the purchase of our 5 Star Card at MDA, James and I received 3 free 2-tank boat dives.  We decided to use them on our first few days on Guam and we very excited to go check out some sites other than ones we could visit from shore.  Finding the harbor was easy and we had our tanks delivered for an extra $1 (what a deal!).  James and I were the first to board so we grabbed seats near the rear of the boat.  This always tends to be my seating of preference so I don’t have to waddle past other divers once all my gear is on.  Easy on and easy off.  While waiting for everyone else to arrive, we lathered up on sun screen and grabbed some water to stay hydrated. 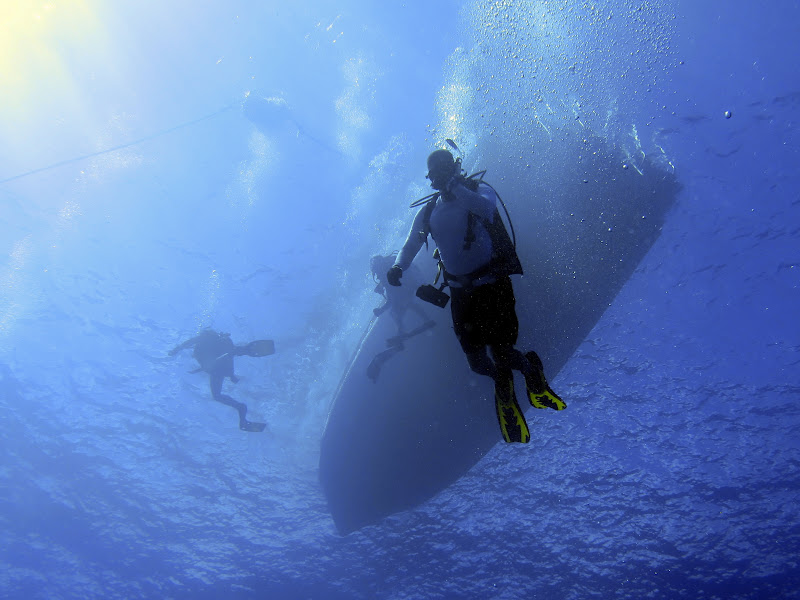 James Making His Decent To The Blue Hole

After all the divers arrived, we headed out of Apra Harbor and then hooked a left and went southward.  Once outside the Harbor it only took us about 15-20 minutes to reach The Blue Hole.  Prior to making our entry, the boat staff gave us a site briefing and safety procedures.  The Blue Hole is a natural limestone crevice running through the rocks.  The entrance at the top started at a depth of 60 feet and the exit out the bottom ranged from 130 feet -200 feet.  The staff made sure to note that there had been several dive accidents at this site where people had descended too deep and then ran out of air.  Finally, they noted that every diver would be required to have a surface marking device (safety sausage) to use during their safety stop and surface swim, would need to end the dive with no less than 500 psi, and would also be required to report their dive profile (max depth, time, and tank pressure) upon returning to the boat.  If anyone dove outside their certification or surfaced with less than 500 psi, they would not be allowed to make a second dive off the boat.  James and I both agreed that these were good rules to keep everyone safe. 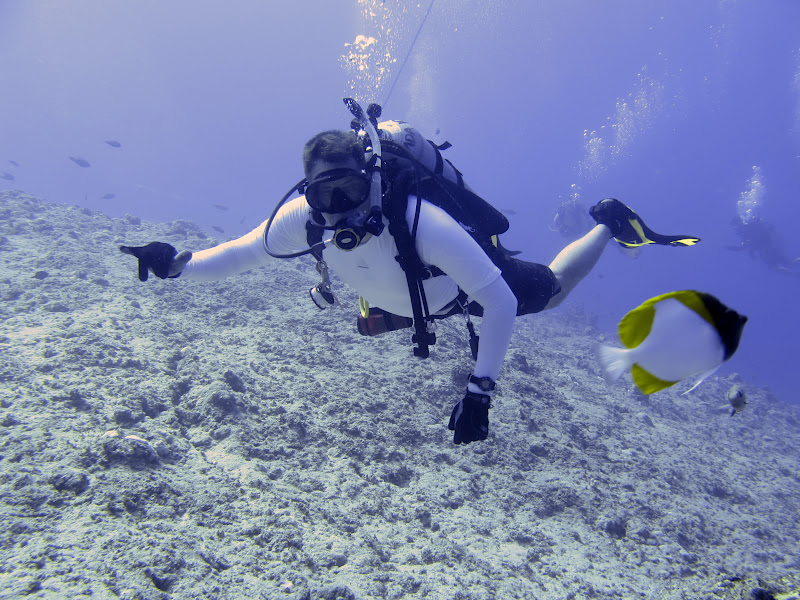 James Ready To Make His Decent Into The Blue Hole

After receiving the briefing, James and I planned our dive.  We would wait till all the other divers had entered the water and then we were make our entrance.  We figured by the time we made our descent to the hole all the other divers would be clear of the area.  We didn’t want to go into the crevice if there were lots of other divers around for safety reasons.  We then planned to descend to 90 feet, stay no longer than 3 minutes, make our ascent upwards out the top (where we entered) and then would stay at 50-60 feet for the rest of our dive.  We also decided to start making out safety stop when either of us reached 1,00 PSI.  We agreed that when making out safety stop, I would inflated the safety sausage and James would handle the reel line.  It was a conservative plan and it ended up working well for us. 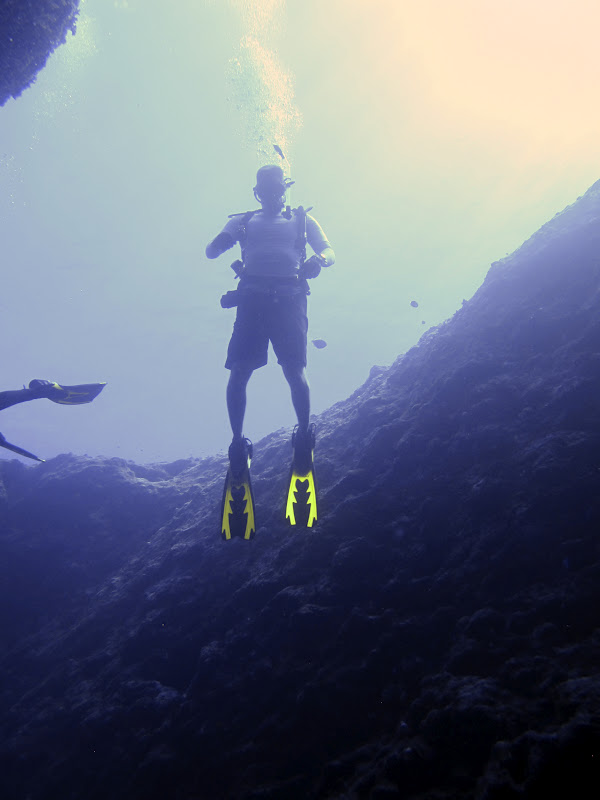 James Descending Into The Blue Hole

As soon as we entered the water, I popped in my snorkel and looked down.  I could easily see the enterance to the Blue Hole located 60 feet below me.  Once James was in the water we both agreed to pay particular attention to our depth gauges – it would be extremely easy to become disoriented or experience vertigo – due to the clarity of the water.  With that we started making our descent.  I was about 20 feet below James and took some photos of him as he came down to the entrance of the Blue Hole. 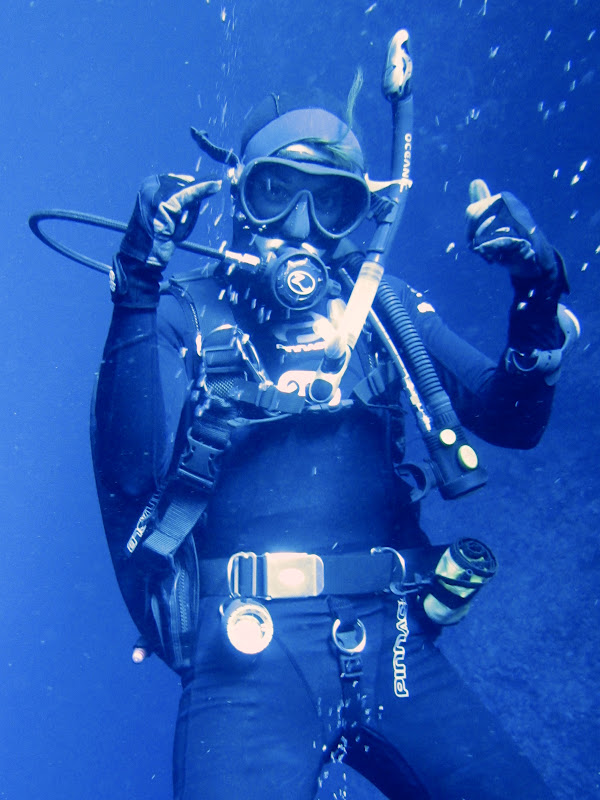 Hanging Loose Inside The Blue Hole

The boat staff wasn’t lying when they said that the bottom of The Hole looked closer than it actually was.  The below photograph doesn’t do the water clarity justice.  It looked like I could have just descended a few feet to reach the bottom. 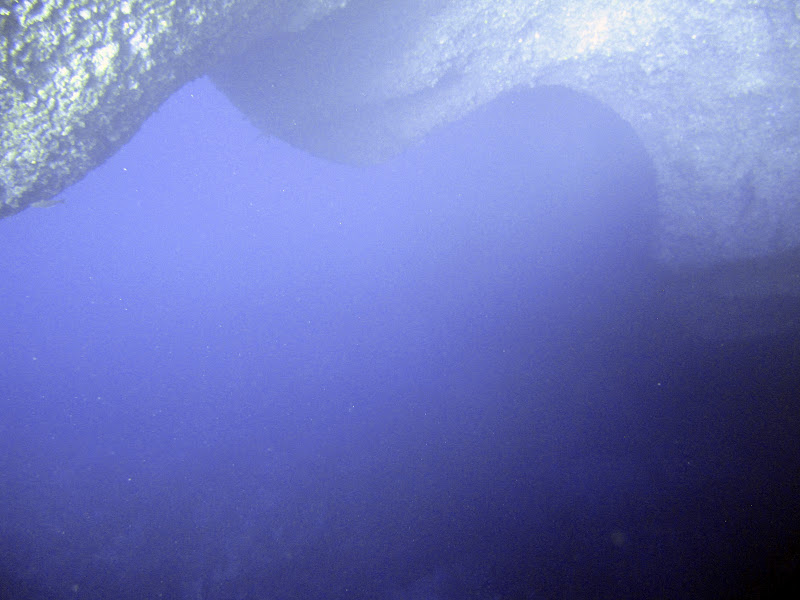 At the 3 minute mark, James and I both signalled to each other to make our ascent to 50 feet to continue our dive.  There was a nice drift so James and I slowly kicked while taking in the view. 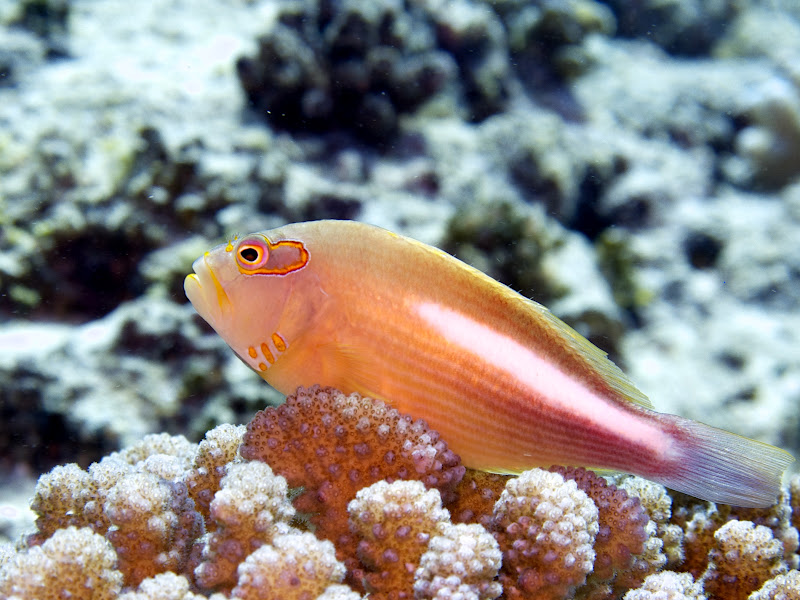 There wasn’t much coral or animals on the dive.  There were small clumps of coral  but most of it was just rubble on the bottom.  If James and I had descended along the ledge of the reef wall we probably would have seen more; however, we didn’t feel like taking on lots of nitrogen (we wanted to make several more dives that day) and we wanted to maximize our bottom time. 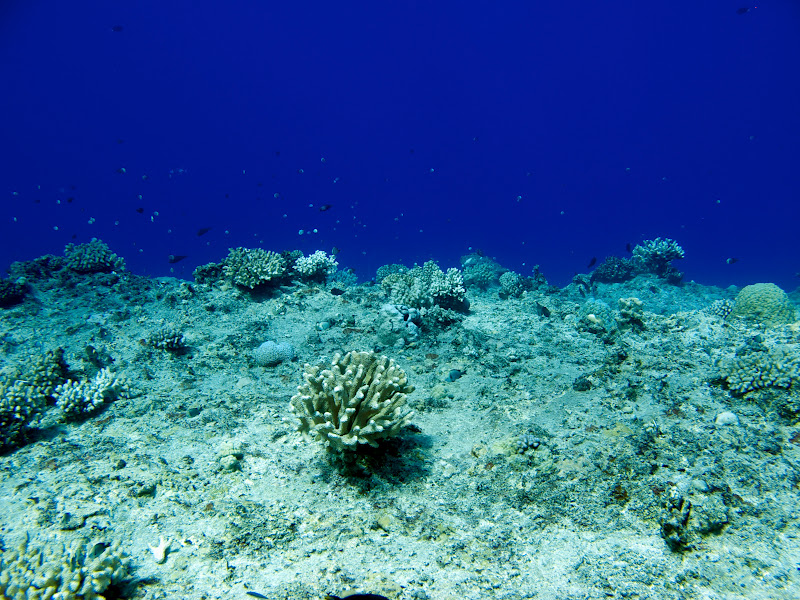 Reef Ledge – Drops Down To Roughly 300 Feet Or Deeper 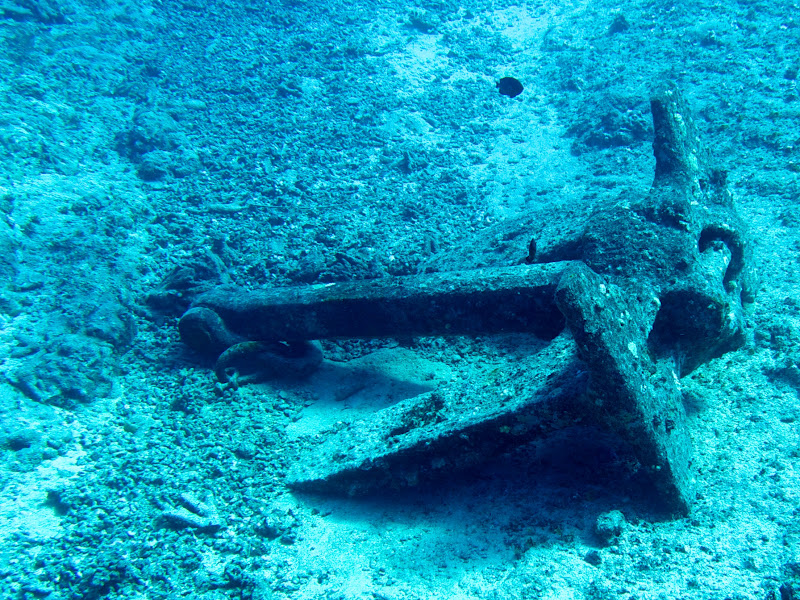 Random Anchor Found On The Reef

Near the shoreline there were large boulders.  James and I went to check them out and on the underside of one of the boulders I spotted a giant moray eel.  Unfortunately, I didn’t have my camera ready and by the time I got it out, the eel had disappeared.  Under another boulder I spotted a school of epaulette soldierfish. 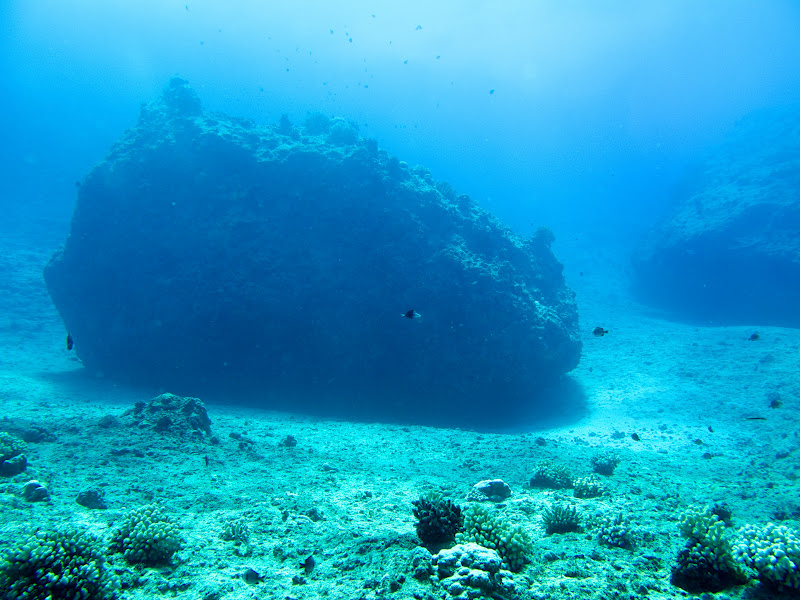 Boulders Near The Shoreline Right before making our ascent to 15 feet for our safety stop, I saw a spotfin lionfish and snapped a photo.  With that James and I slowly made our way to 15 feet, making sure to focus on our depth gauges.  Along the way our Suunto dive computers had us make a deep stop for 1 minute for extra conservatism.  At 15 feet I pulled out my safety sausage and slowly inflated while James prepped the reel.  Once the marker was 3/4 full we attached it to the reel and let it ascend to the surface to mark our location.  From there is was just pure relaxation waiting for the 3 minutes to pass. 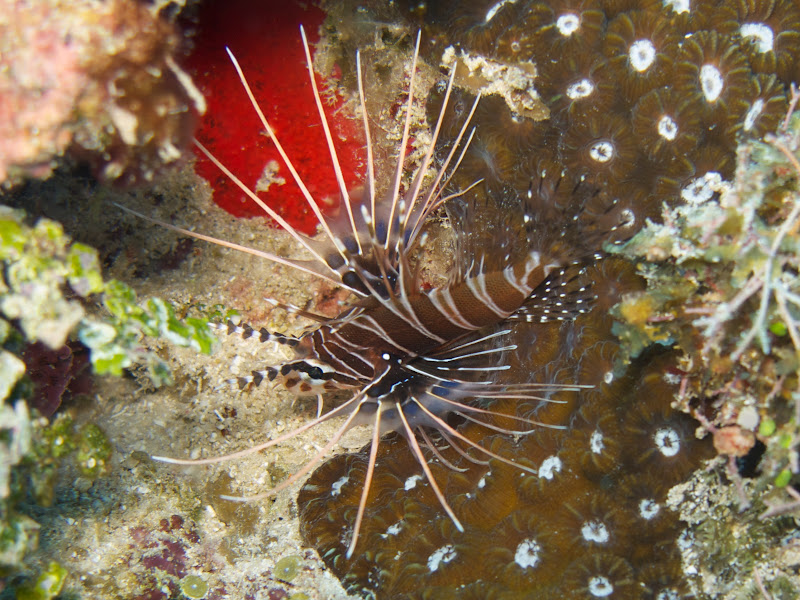 Once back aboard the boat, we switched out our tanks and drank some more water.  It was really hot outside!  Some of the local divers had also brought some yummy snacks aboard and offered them to us so we ate a little bit as well.  The bean dip was really tasty!  With everyone aboard, the captain turned the boat around and headed back to inside of Apra Harbor where we would begin out second dive.  James and I were pumped to get back in again!