After exploring the WWII Japanese Seaplane in Apra Harbor, James and moved just a short ways to the west to a site called Gab Gab Beach.  This had been another recommendation from my friends back in Okinawa and also from the local divers in Guam.  James and I were once again please with our dives.  I identified 2 new nudibranchs, the coral was amazing, and we also saw a turtle! 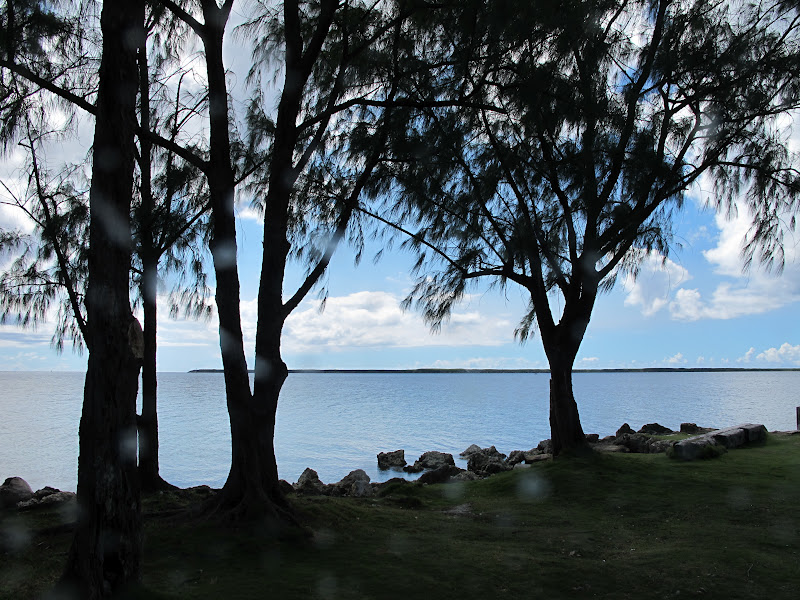 Driving just a short ways from where we parked to make our dive at the Japanese Seaplane, we found ourselves at Gab Gab Beach.  Before getting back into the water, we had a casual picnic of sandwichs and fruit.  We found a small patch of shade under some trees and had a great view of Apra Harbor.  It was very relaxing but by the time we had finished eating, we were ready to get back into the water.  It was calling our name! 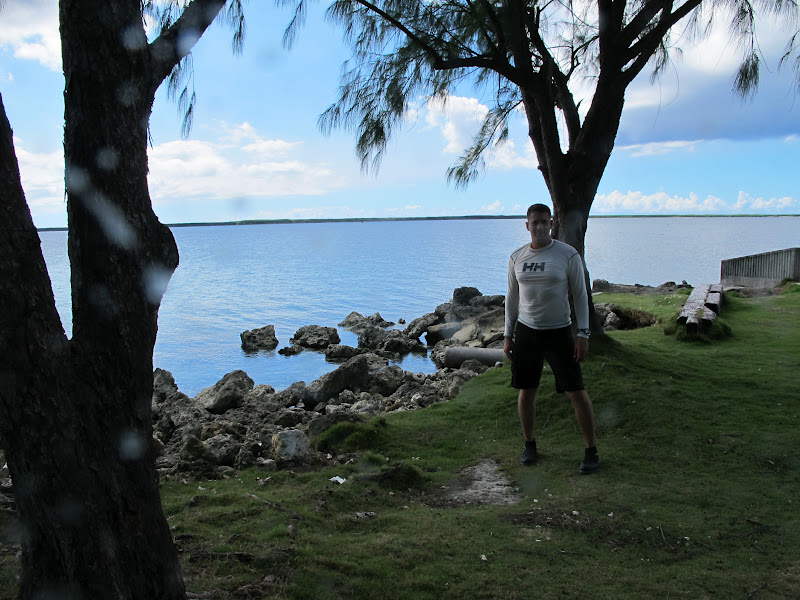 After agreeing on our dive plan, James and I kicked out to where the coral wall dropped off.  We found a spot (a pale filled with cement) for where James would tie off our buoy.  We made a slow descent and after James had secured the line, we made our way down to 40 feet.  The hard coral was absolutely amazing and I’d never see such massive amounts. 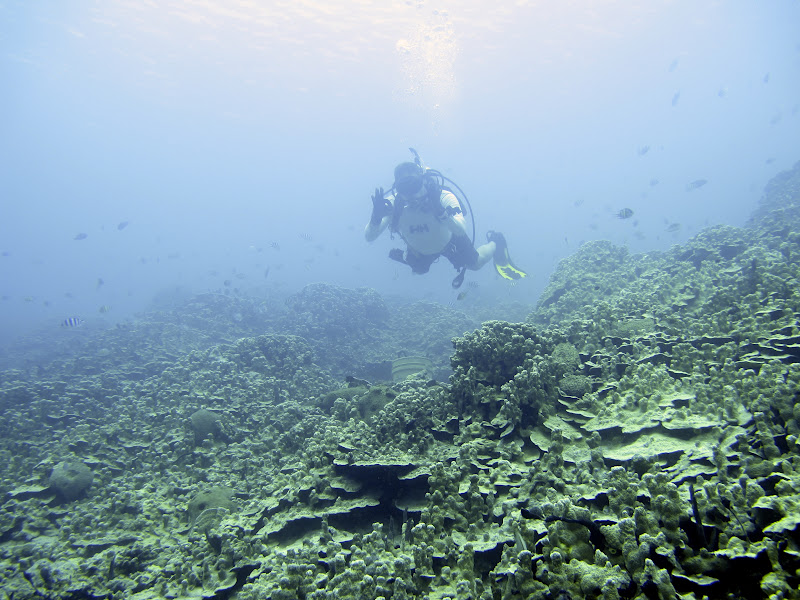 James Signaling That Everything Is OK

James and I began our dive westward and we slolwy kicked along the reef.  I was curious to see if Guam also had copious amounts of nudibranchs like Okinawa.  About 10 minutes into the dive, I spotted my first nudibranch for the trip.  Immediately, I thought it was a species new to me.  I snapped a few pictures and motioned to James that I had found one.  I finally identified the nudibranch as a Phyllidiella lizae.  I searched through my Indo-Pacific Nudibranchs and Sea Slugs: A field guide to the World’s most diverse fauna by Terrence M Goslinger, David W. Behrens, and Ángel Valdés but unable to find a similar looking nudibranch (I’m not very good at matching nudibranchs).  I ended up posting the photo onto “NUDIBRANCH LOVERS” on facebook and a gentlemen replied back with the correct identification.  As it turns out, this nudibranch is not known to be found in Okinawa. 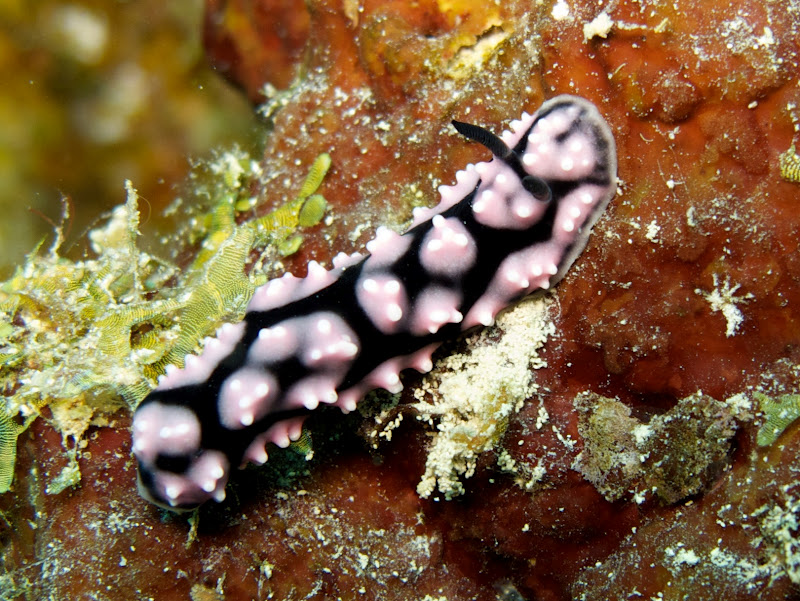 There were a fair amount of fish at Gab Gab Beach but James and I believe that there are larger quantities on Okinawa.  Perhaps we’re right, perhaps we’re wrong.  I also spent the majority of my time looking for animals to take pictures of in macro-settings on my camera….so I wasn’t much paying attention to the larger fish. 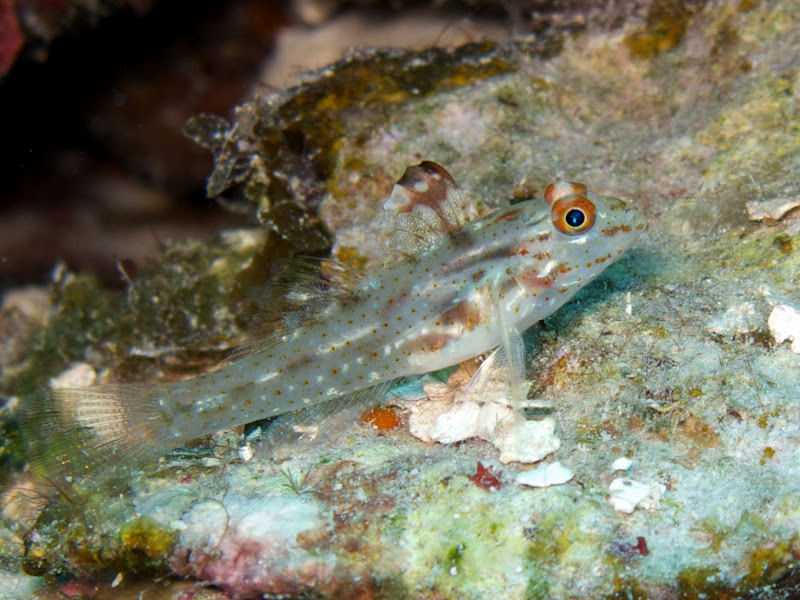 After finding the Phyllidiella lizae nudibranch, I came across another type – this one also found on Okinawa.  It was a Chromodoris elisabethina.  The colors on it were very faint but just bright enough to make an identification. 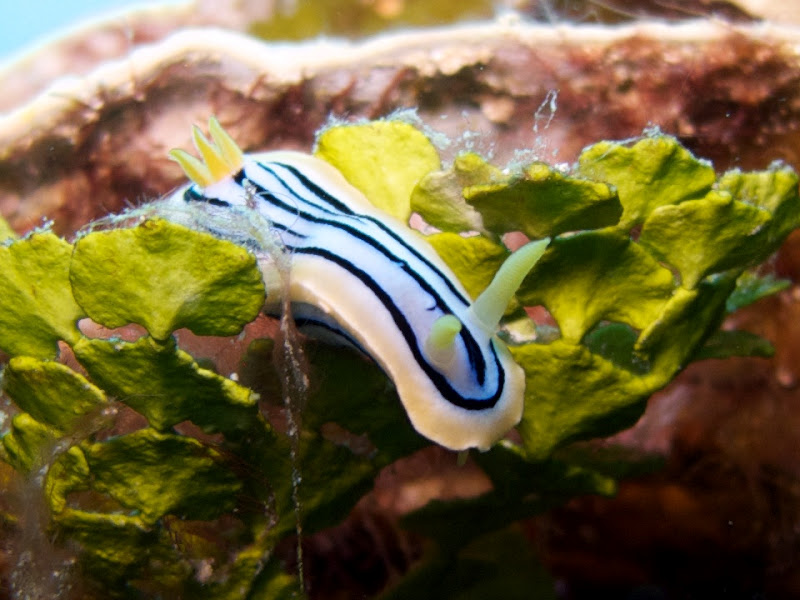 After kicking out for 30 minutes, James and I decided to turn around to head back to our buoy.  Because I hadn’t found much macro-life on the reef to photograph, I decided to take some pictures of the amazing coral and my favorite dive buddy, James. 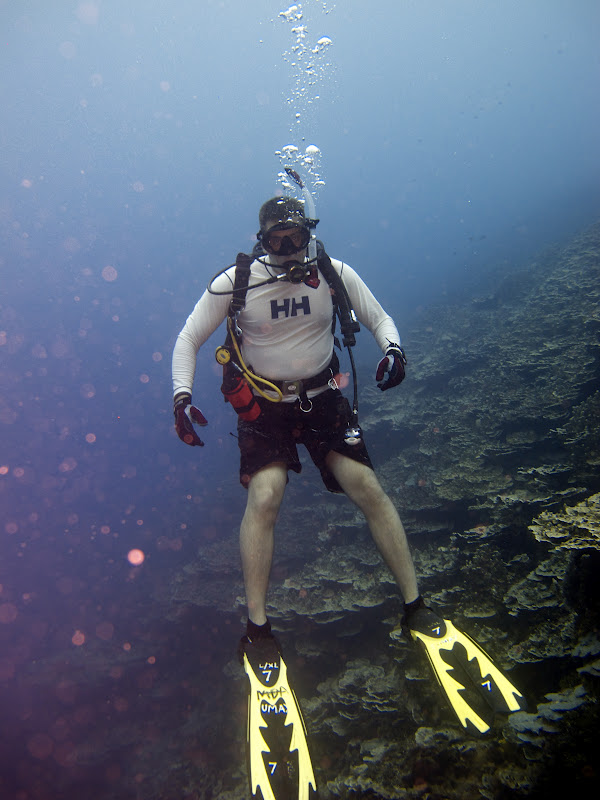 Like I mentioned earlier, the coral at Gab Gab Beach was a new sight to me.  I had never seen layer upon layer of coral growing like it had here.  Okinawa has some nice corals but this was something incredible. Unfortunately, I didn’t bother taking a ton of the coral here so I’ll have to describe it instead.  The neatest part about its structure was how it would have peaks, almost like a mountain top.  It was fun to swim in between these peaks throughout the dive. 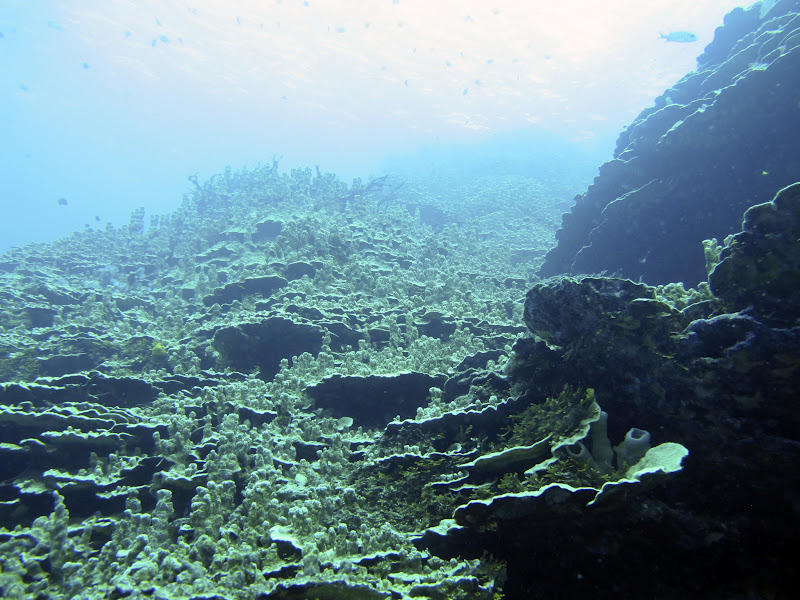 Layer Upon Layer Of Hard Coral 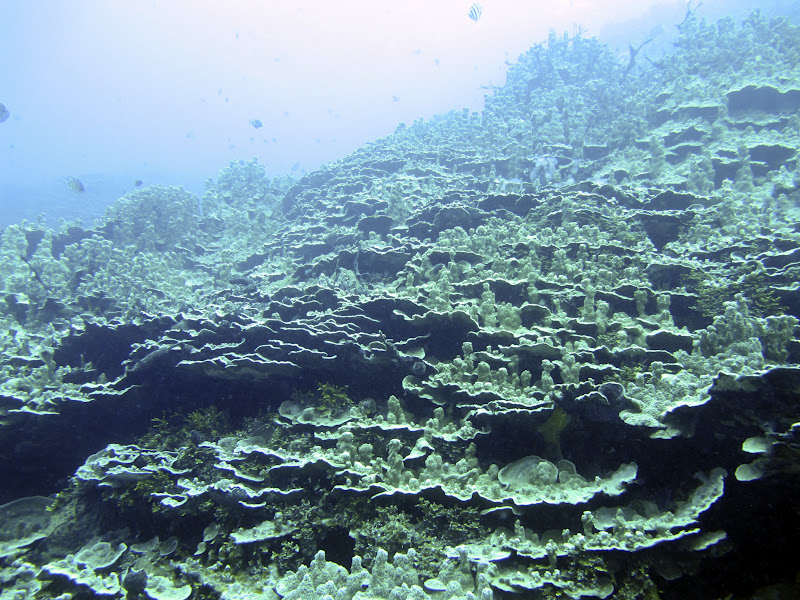 For me the second half of the dive was really exciting.  As I looked over the coral, I thought spotted either a nudibranch or a curled up flatworm.  It was a bit oddly shaped so I wasn’t too sure.  I swooped in and started taking lots of photos.  Of course, James waited patiently for me to finish – such a great dive buddy!  After referencing Indo-Pacific Nudibranchs and Sea Slugs I found out I had spotted a Thuridilla gracilis nudibranch.  This type of nudibranch is also not found in Okinawa. 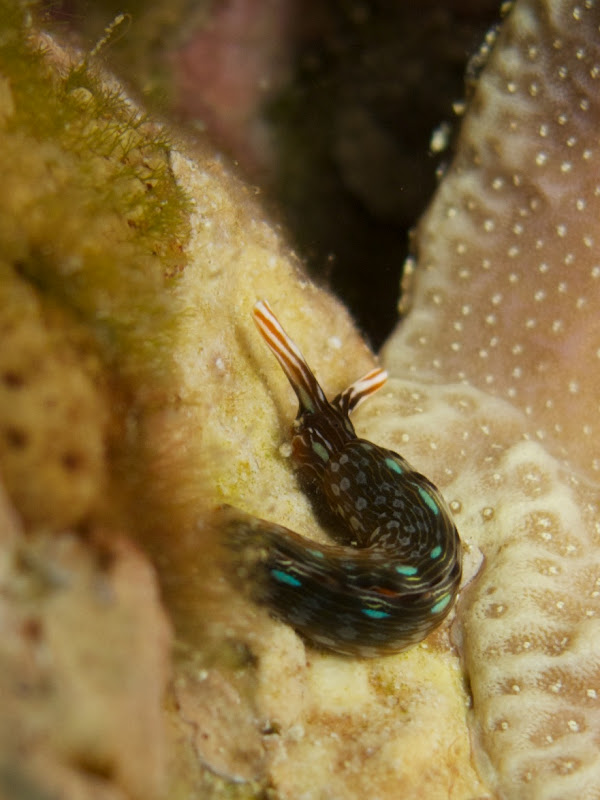 The nudibranch was moving at a good clip and it had itself positioned between hard corals so getting a photo was challenging.  Out of the 15 or so pictures I took, I really liked 3 shots.  2 have been posted in this blog entry. 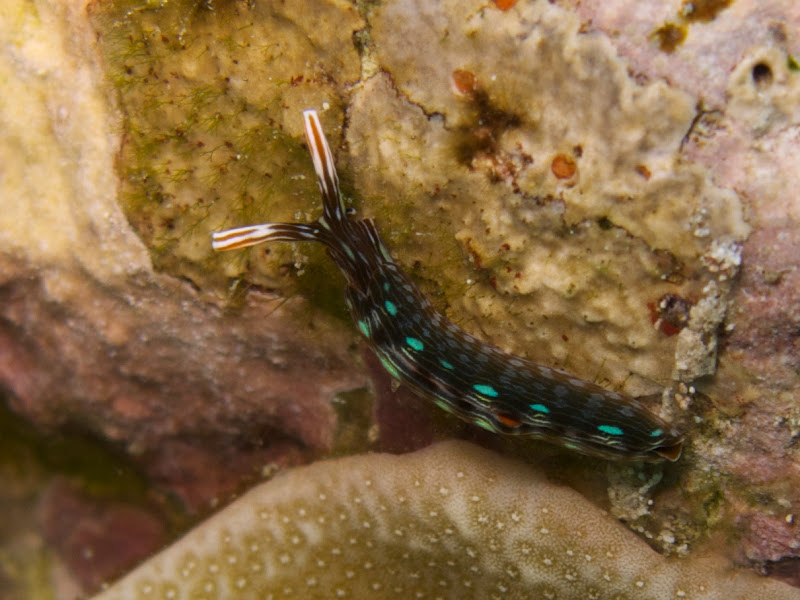 After finishing my photo shoot with the Thuridilla gracilis nudibranch, we continued the dive.  Having spotted such an interesting nudibranch, I kept my eyes focused on the reef in the hopes of spotting some more.  Suddenly, I heard James making some noises behind me -almost like he was singing into his regulator.  I turned around to find out “what te deal was” and saw him pointing ahead.  I turned back around and saw a sea turtle swimming off .  WOW!  I snapped some photos as it continued to depart from our area.  After we surfaced James told me it was resting on the coral and I had almost swam upon it.  I was so in the zone I didn’t even realize it! 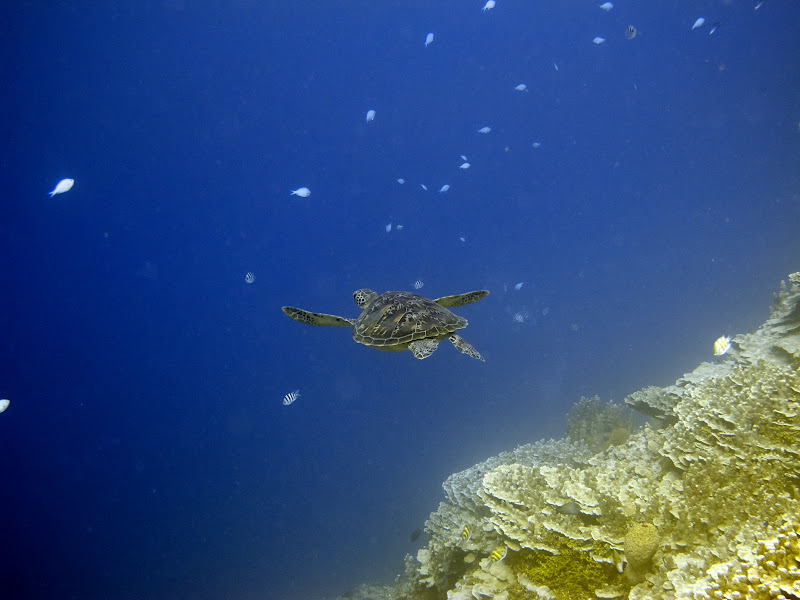 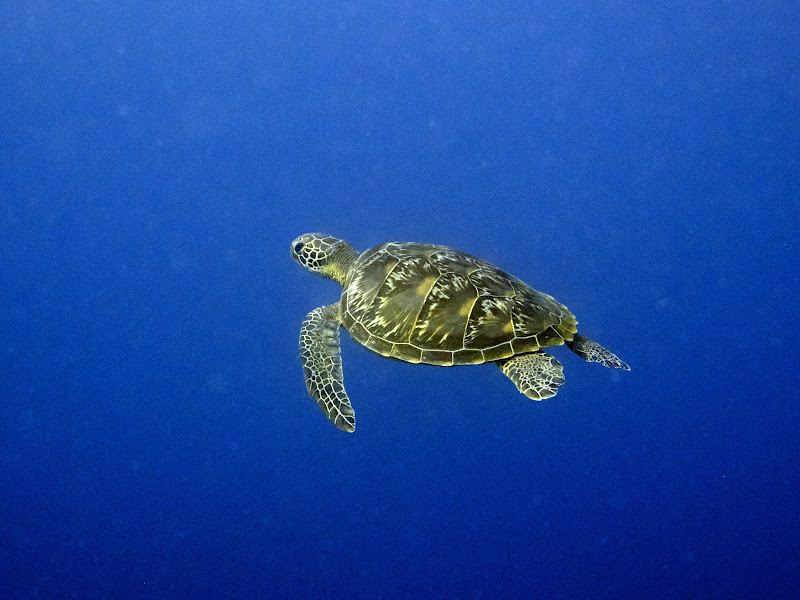 Once the sea turtle was out of view, James and I high-fived each other.  Our first dive at Gab Gab and we were able to see a turtle.  Awesome!  I always enjoy watching turtles swim through the water because they are some graceful and FAST!  They can really move underwater and it looks effortless. 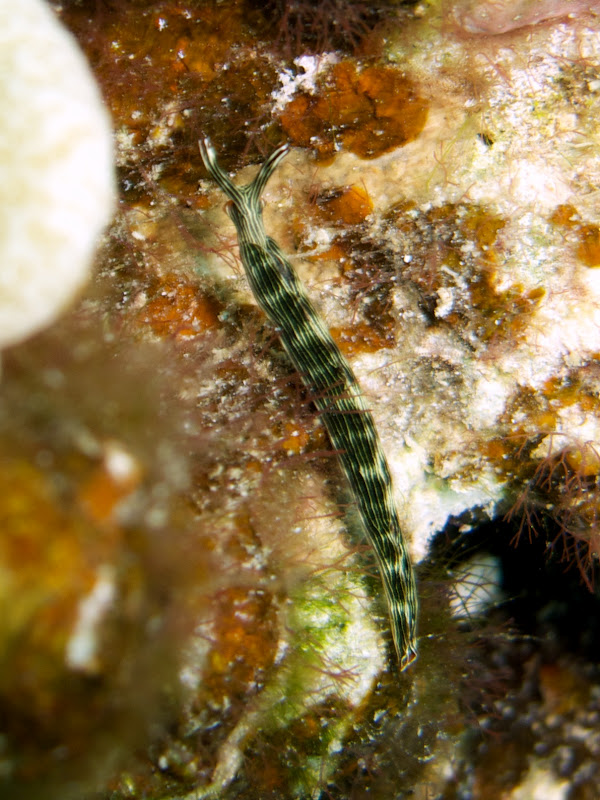 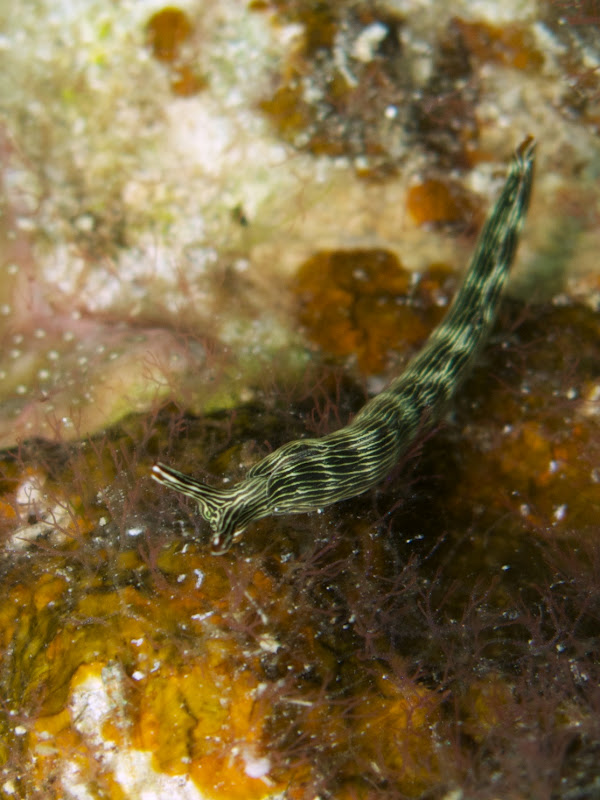 As the enterance/exit into the water at Gab Gab Beach there is a slab of concrete  where divers can use to stand on for slipping on or taking off their fins.  Also in this area are some cute blennies that hide in the nearby rocks.  I stayed on my here and waited for the Jewelled Blenny’s to pop out.  I snapped a few photos and then made my exit from the water.  James and I were extremely pleased with Gab Gab Beach.  We decided to continue diving it because the water was calm, the entry and exit were extremely easy, we saw some good wildlife and it was close to MDA’s scuba shop on US Naval Base Guam – making it easy to get air fills when needed. 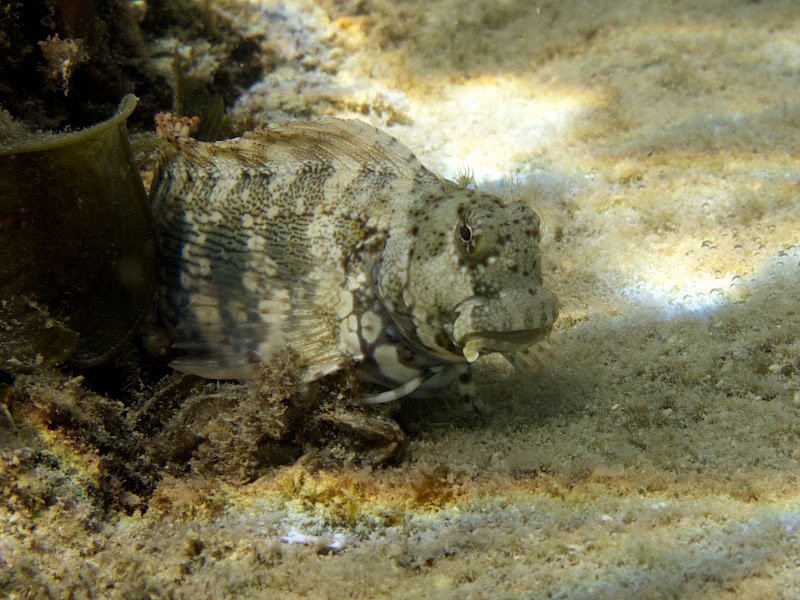