After my parents had visited James and I in Okinawa for a week and a half, we all made our way to Guam for 5 days of fun in the sun.  James and I decided to get as much diving in as possible while there. After speaking with the knowledgable staff at Micronesian Divers Association, we planned to make our first dive to a World War II Japanese Seaplane in Apra Harbor.  It was a pretty cool dive!

This was our first dive trip where we needed to travel on a plane to get to a dive site so James tried to prepare for every continency possible.  We spoke with fellows divers who had been to Guam and asked them what shop to get our rental gear (tanks, fins, and weights) from, what sites would be the best to check out, researched the local area online, and we also packed an extra set of regulators just in case anything should break.  Even though we though we had covered all our bases, we still had lots to learn.

When we showed up at Micronesian Divers Association (MDA) we spoke with the gentleman working behind the counter for suggestions to some easy dive sites.  Taking into account what he said plus what my friends had previously mentioned we planned out first day of diving.  For our first day we would explore the dive sites located on US Naval Base Guam, specifically the Japanese Seaplane in Apra Bay, St. Loius Beach, and finally Gab Gab Beach. 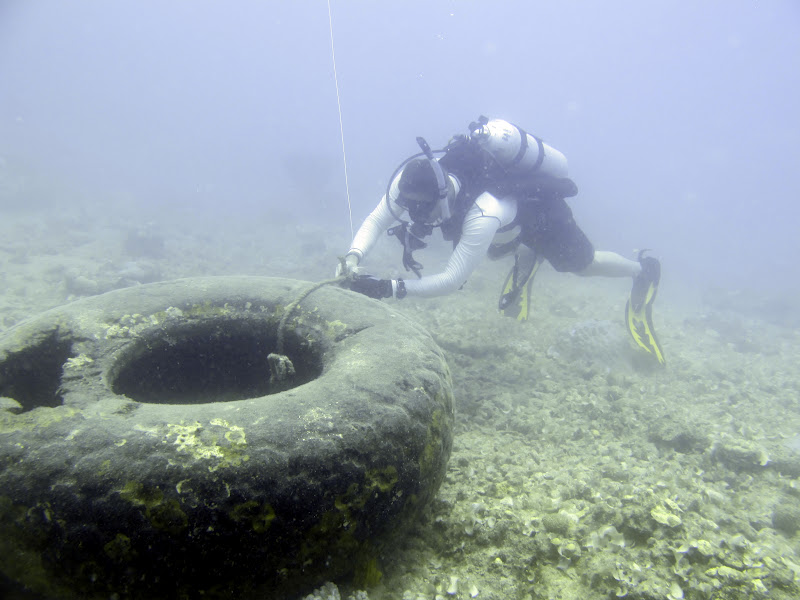 We also purchased several items from MDA which we would need specifically for diving in Guam.  First, we bought a small buoy and dive flag cost around $30.  Local laws require divers to take out a flag to mark their presence in the water so boat stay clear of the area.  If divers fail to comply they can be fined up to $1,000.  No thanks!  We also bought a reel to hook onto the dive flag or our safety sausage (when boat diving) which cost around $15.  MDA also offers a 5 Star Card which provides tons of discounts to their stores services and local establishments sold for $90.  We made sure to grab one of those too.  After renting our fins, weights, and tanks we headed south to US Naval Base Guam to make our first dive at the seaplane. 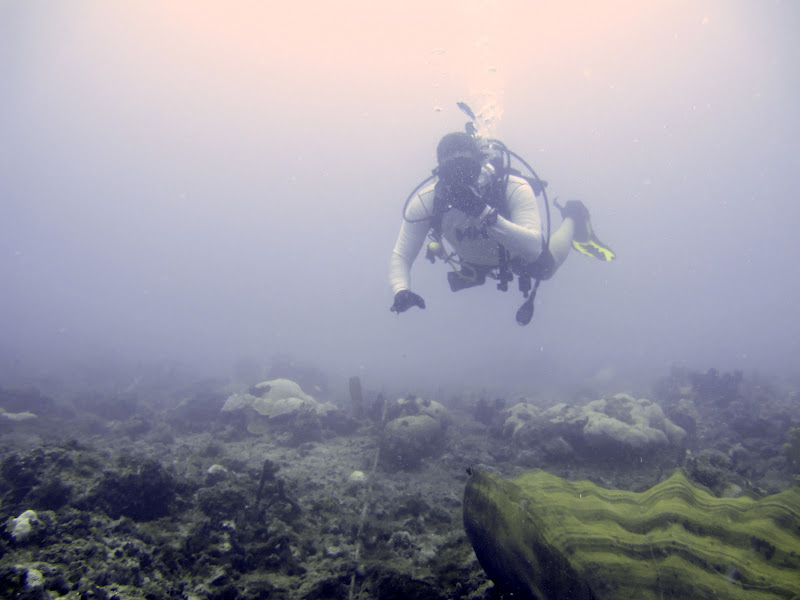 Finding the site was no problem and there was a dive instructor nearby who gave use some additional tips on finding the wreck.  After suiting up we walked a sort ways down the road and then climbed over some rocks and into the water.  It felt so good after sweating in my skin suit during the short walk.  James and I kicked around the rusted piers hoping to spot the descent line along the bottom that would take us to the shipwreck.  After about 15 minutes of snorkeling on the surface, James and I decided to descend to a deeper depth – maybe we just couldn’t see it from the surface.  We decided to look around for a maximum time of 10 minutes at 60 feet.  If nothing could be found we would turn the dive into observing the coral reef in the area and try to make the most of it.  However, if we managed to get to the descent line within 10 minutes we would continue down to 90 feet to check out the wreck. 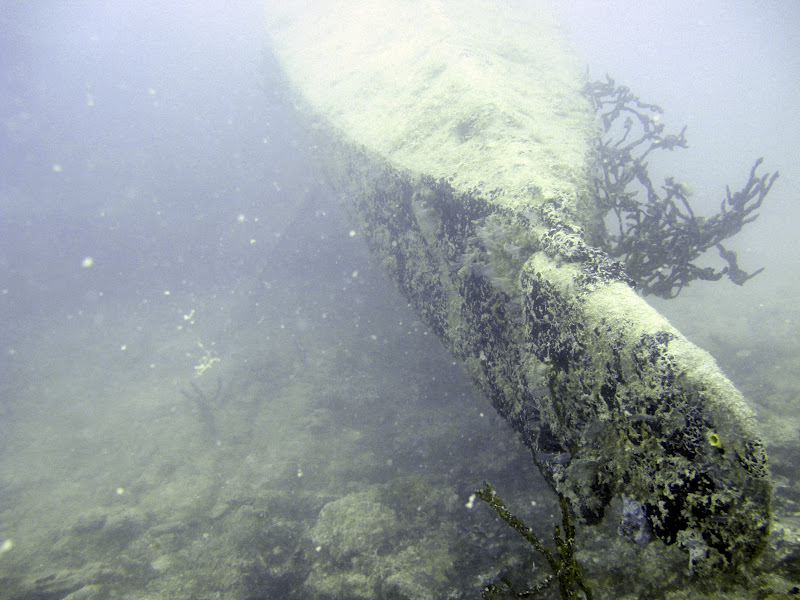 We slowly descended down to 60 feet and James secured our dive buoy onto a massive truck tire.  It was pretty cool having him positioned beside it to get a reference for just how large it was.  Once the dive flag was in place, we started our search along the ledge where the bottom would descend down to 60 feet.  After about 8 minutes we signalled to each other that our search appeared to be useless, so we turned around and started heading back to our dive flag.  I followed the sloping bottom up about 10 feet and then turned around.  After kicking past what appeared to be a kitchen sink (no idea how that got here) I saw a thin, metal line running along the bottom.  I tried tapping my tank to get James attention but he wasn’t able to hear me.  I furiously kicked over and grabbed his fin to get his attention.  A bit startled he turned around and I pointed for him to follow me back to the line. 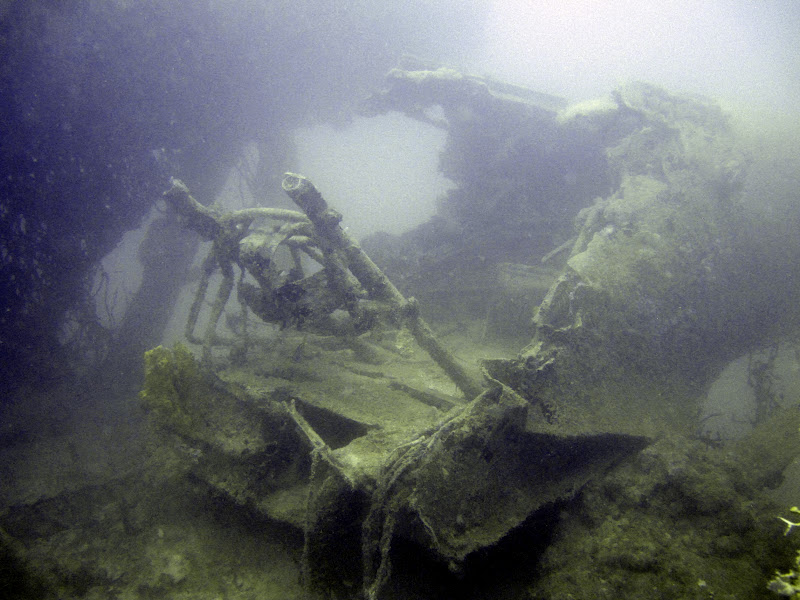 We slowly made our descent along the line, signaling back and forth several times how much air we each had left and to make sure we were both ok.  My breathing rate had picked up in anticipation of seeing the wreck and the visibility had worsened to about 15 feet…also creating more of a thrill for the dive.  Ever so slowly the the tail end of the seaplane came into view.  My heart was beating a little faster…there’s just something about descending upon a sunken object that’s incredible and breathtaking.  I think it has something to do with seeing the wreck slowly take shape while making your approach.  Knowing a little history about the wreck also makes it more interesting and fun. 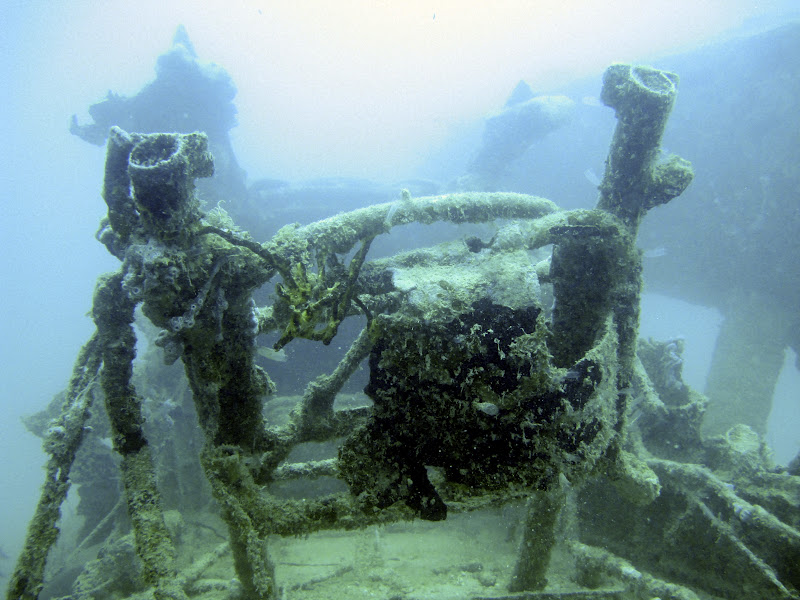 James and I spent roughly 6 minutes exploring the seaplane before we started to make our ascent.  I snapped as many pictures as possible.  There was a lot of silt in the water so visibility wasn’t the greatest.  Because of this, I ended up turning off my camera flash due to all the backscatter.  We made sure to keep a safe distance from the plane so as not to get snagged on any of its protuding metal. 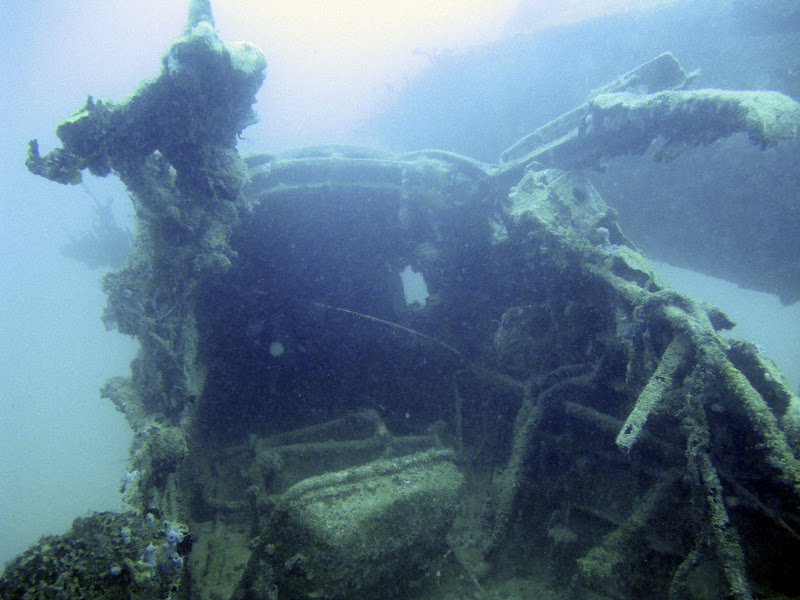 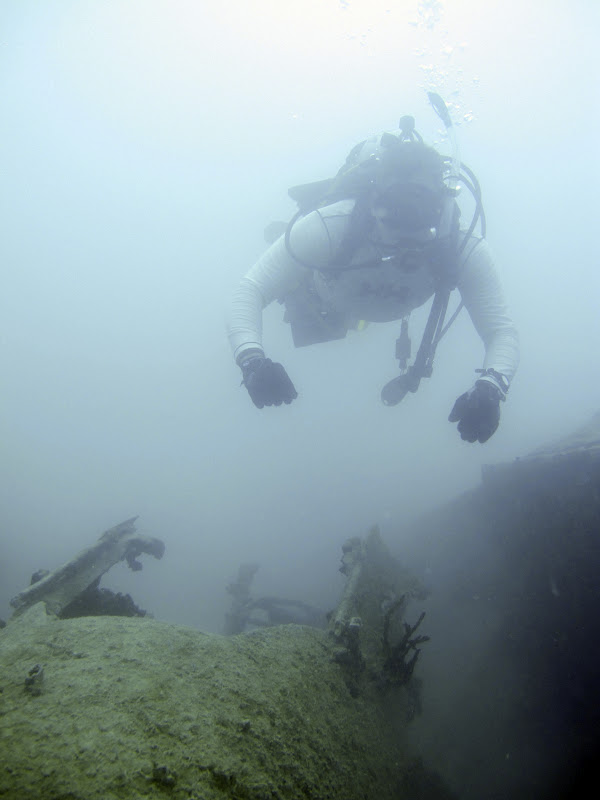 After studying photos of the Nakajima A6M2-N (the model of the wreck we explored) online, I am pretty sure that James and I dove around the plane section and the middle pontoon.  James remember the plane being flipped upside down in its resting place. Apparently the cockpit and engine can be found further to the east, but James and I never made it over to see them. 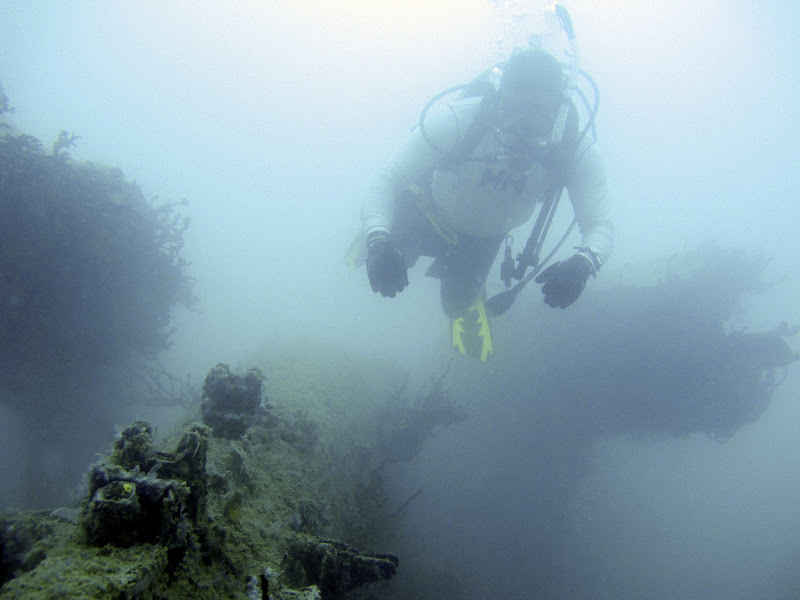 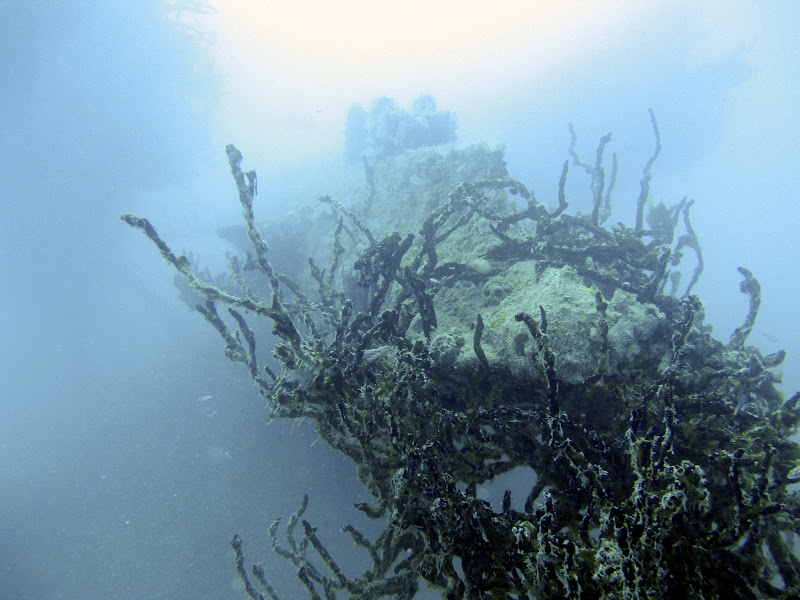 In addition to looking at pictures of the Nakajima A6M2-N, I also did a little bit of reading up on it.  It turns out that this particular aircraft was modelled off the Mitsubishi A6M Zero with modification to make it capable of taking off and landing on water.  Why would Imperial Japan need a plane suited with these features?  “As evidence of Japan’s long-standing plans for territorial expansion through the Pacific, it had been recognized that in the inevitable ‘island-hopping’ war there would be few ready-made air bases from which to provide air cover during the occupation of the smaller islands, and that the construction of runways would be impractical. Although equipped with almost a dozen aircraft-carriers, the Japanese would be unable to use them in support of every single island invasion.” (Nakajima)  Additionally, it also served in a defensive capacity, intercepting enemy aircraft looking to attack Japanese fuel depots. 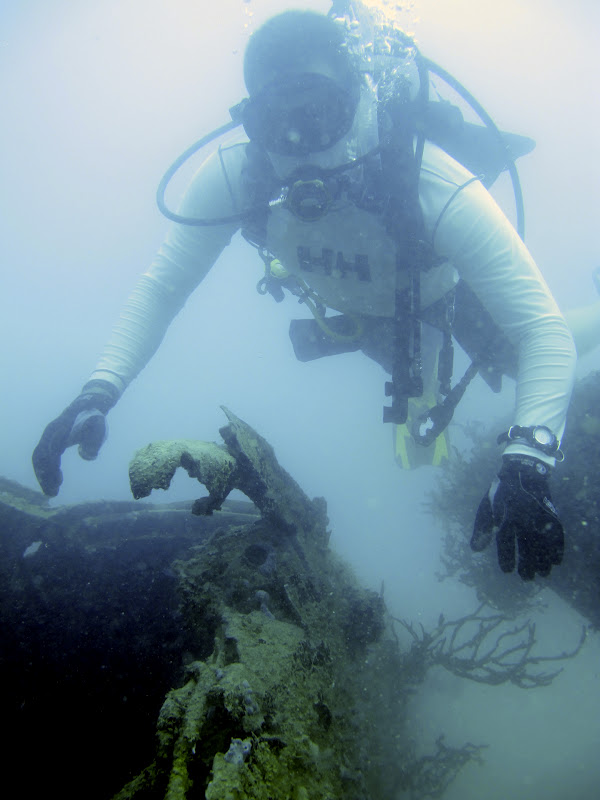 James Hovering Above The Wreck 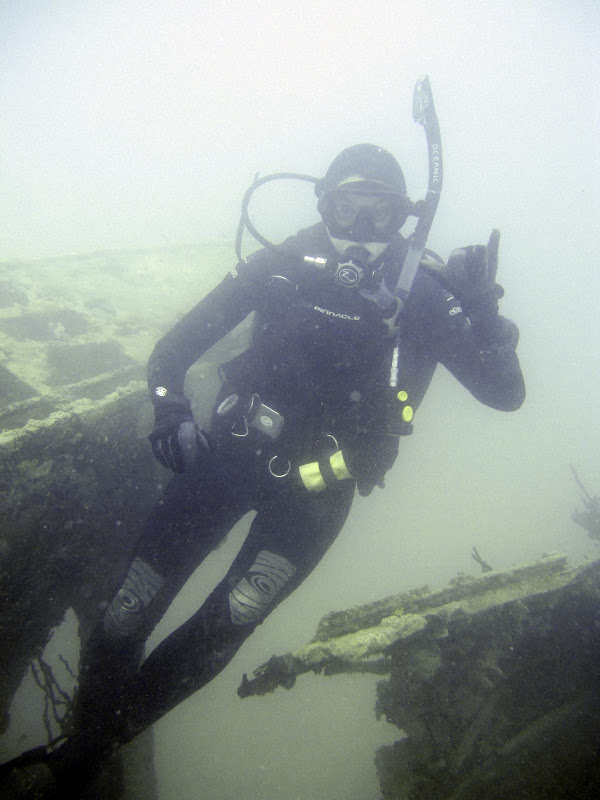 In regards to the Nakajima A6M2-N’s wartime history, it was employed heavy during The Battle of The Coral Sea where is had a great success rate in battle.  As Allied forces began to increase wartime material and equipment though, the Nakajima A6M2-N suffered heavy loses – of particular note was during the Allies campaign to recover the Aleutian Islands.  The aircrafts large wing pontoon and float decreased it’s performance by 20%, making it an easy target for the overwhelming number of Allied fighters.  In total, 327 Nakajima A6M2-N’s (or “Rufes” as called by the Allies) were built and production stopped in September 1943. 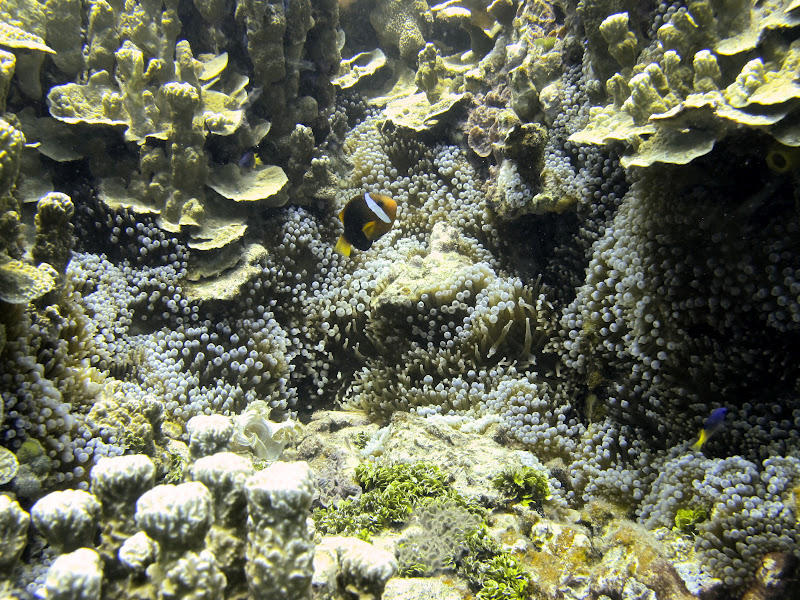 After searching around the seaplane it came time to start making out ascent back to the surface.  We followed the descent line back up to the 60ft ledge and then swam back to get our buoy.  While making our final ascent to the surface we tried to enjoy the wildlife.  The only thing we came across to note was a large anemone colony (much bigger than anything I’ve seen in Okinawa).  We also spotted a picasso triggerfish (also more prevalent in Guam than Okinawa). 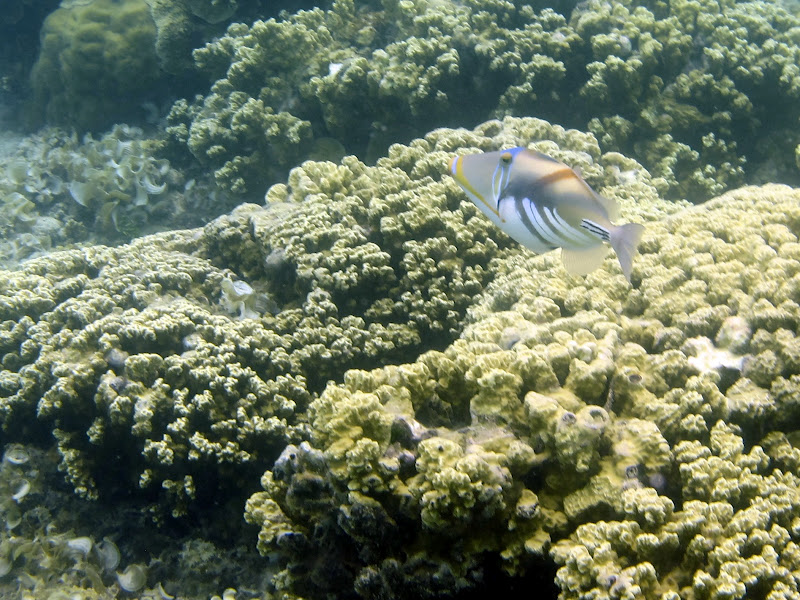 Overall it was a great dive.  Even though we had to search around for a bit, James and I still had fun.  We had a good plan and we stuck to it.  We also got to see a little bit of WWII history which is awesome considering my personal interest in studying history from that time period.