For the last dive of the night diver specialty course I taught, the group decided to meet up at Ark Dive.  We saw at least 4 different eels during the dive, several flatworms, and I spotted a new types of nudibranch species.  Everyone in the course really impressed me for numerous reasons too.

I had a great group for my most recent night diver class.  After doing two dives at Maeda Point, we headed down to Ark Dive the following week to make our last dive.  It ended up being a great dive because we saw at least 4 eels (who allowed us to take massive quantities of pictures), several flatworm, some nudibranchs….and….most importantly, we had some good bottom time (a sign that everyone was relaxed and at ease). 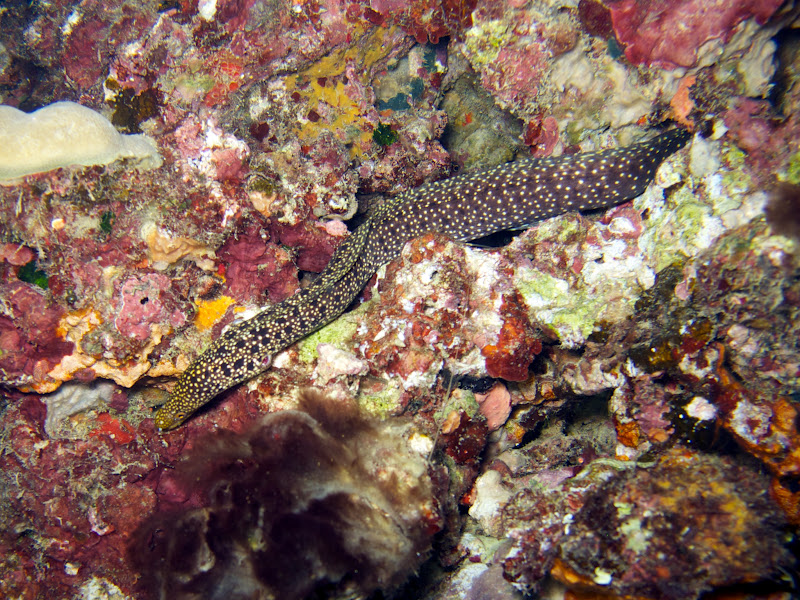 Eel Out Looking For Food

After completing our skills, we started the dive by heading towards the south.  Pretty much as soon as we made it out of the area that’s 20 feet deep, we started spotting eels left and right.  The first one we saw was a moving through the rocks and coral, most likely in search of food to eat.  We watched it swim around for a bit because it’s not often you see them out and about.  Usually they just have their head sticking out of some rocks, so this was a real treat for everyone. 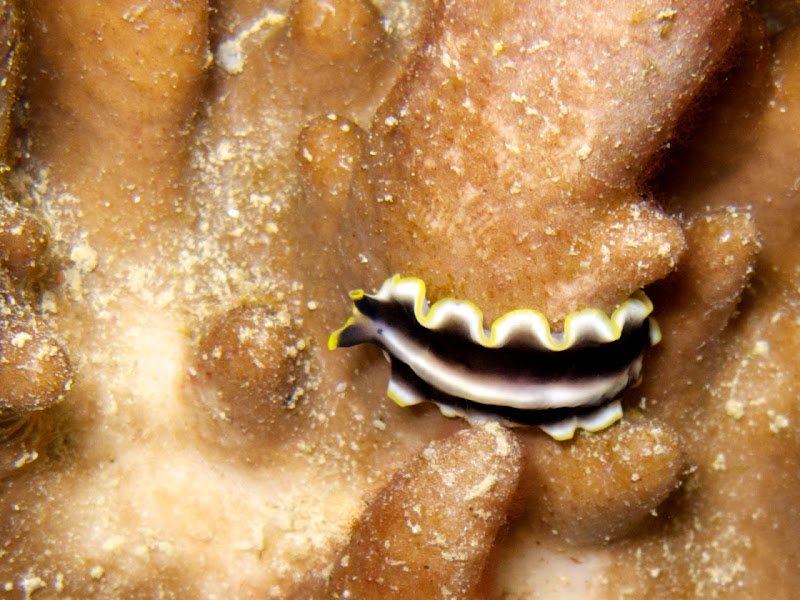 I also noticed several Pseudobieros sp. flatworms during the dive.  They seem to be popping up more frequently now than I’ve seen before.  This could just be due to the fact that I’m doing night dives more often though.  I’ve definitely noticed more at night than compared with my daytime dives. 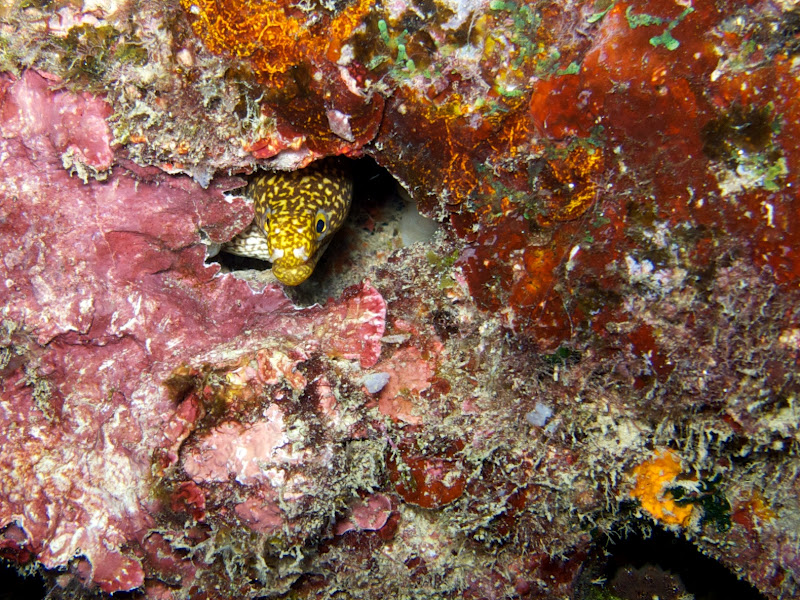 Another Eel Watching Us From Within The Rocks

Throughout the dive I monitored everyone’s buoyancy and it was terrific.  We kept a steady depth between 40-50 feet and we all made sure to keep a good amount of distance from the reef so it wouldn’t be disturbed.  It was great to see everyone conducting their dive in a safe manner (no saw-tooth dive profiles) while also respecting and preserving the reef.  Buoyancy control can be challenging at night because it’s easy to get disoriented but our dive group did a fantastic job.  I was very proud! 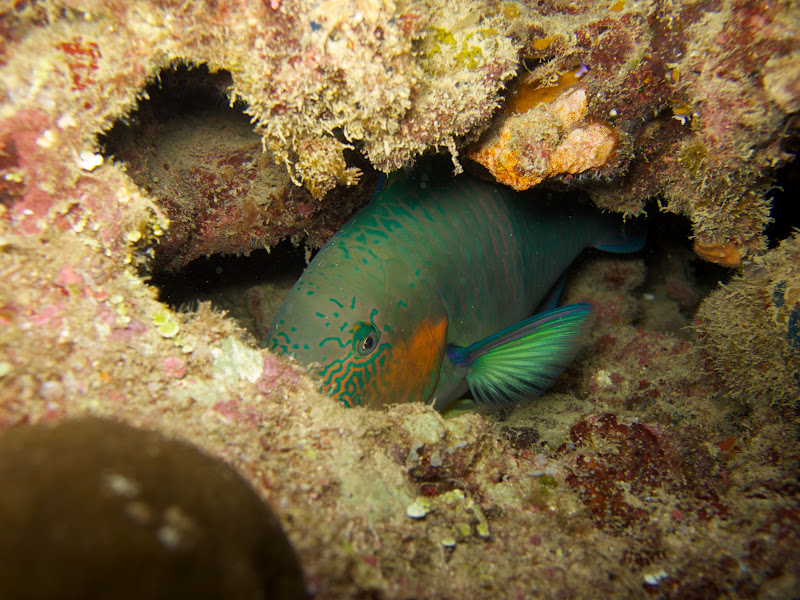 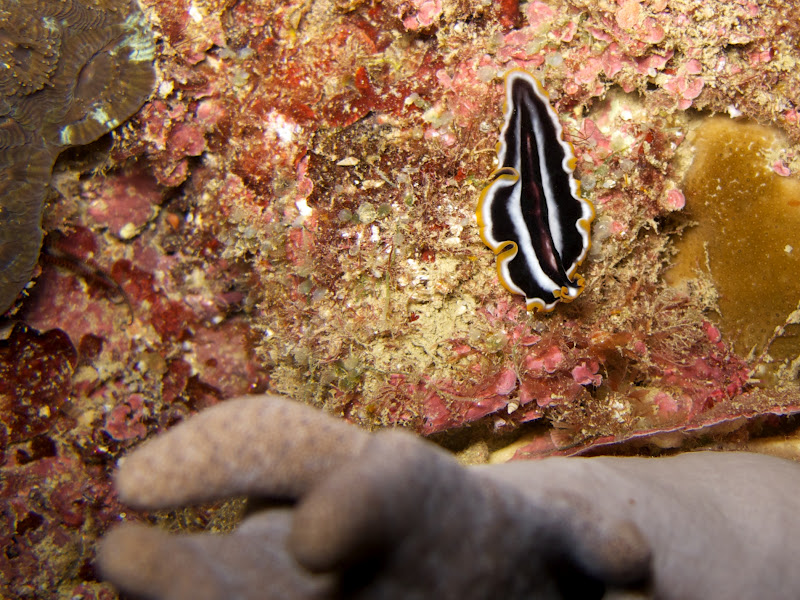 As we kicked back toward our exit, we came across an area covered in rubble.  As always, I was hoping to stop a nudibranch – they generally crawl through this area at night.  Tonight I wasn’t disappointed.  I noticed a bright white object on top of a rock and swam over to get a closer look.  Awesome!  It was an  Ardeadoris egretta nudibranch.  Despite only having two colors, white and orange, I still really like photographing these little guys.  They always remind me an orange cream-sicles and by the time I get out of the water I want to go eat one (a cream-sicle, that is!).  Delicious! 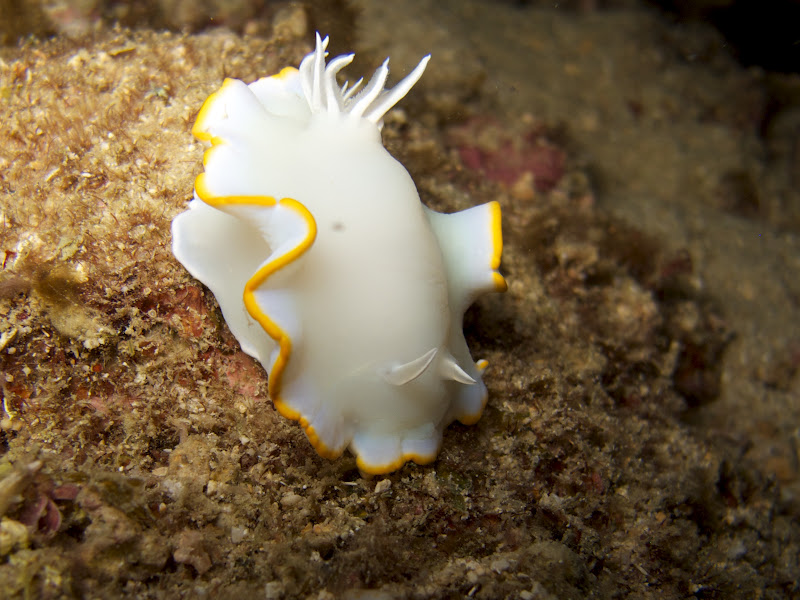 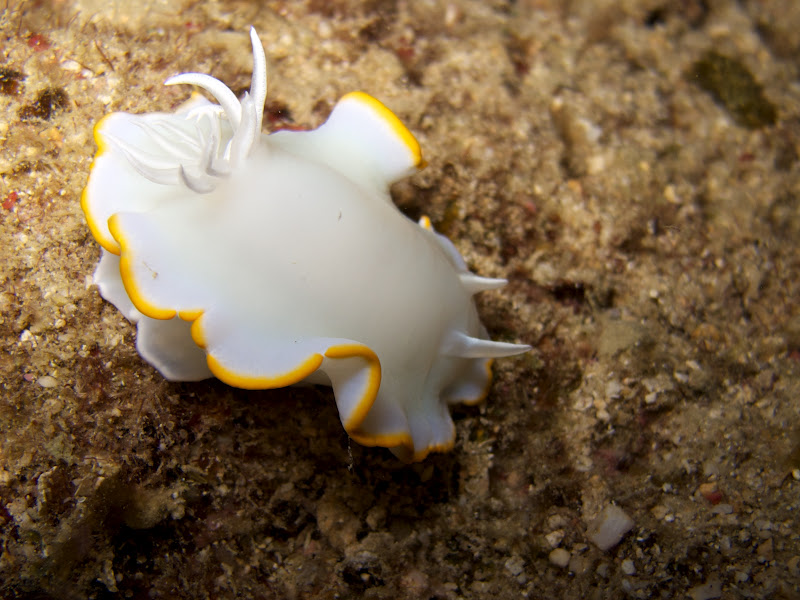 After I navigated the group back to the chain, I started looking in the rocks for any last minute discoveries.  To my delight, everyone in the group started their safety stop without me having to give them the signal.  I was once again impressed.  Everyone had paid attention to the briefing and took individual actions as necessary when it came time to execute.  This is great to see! 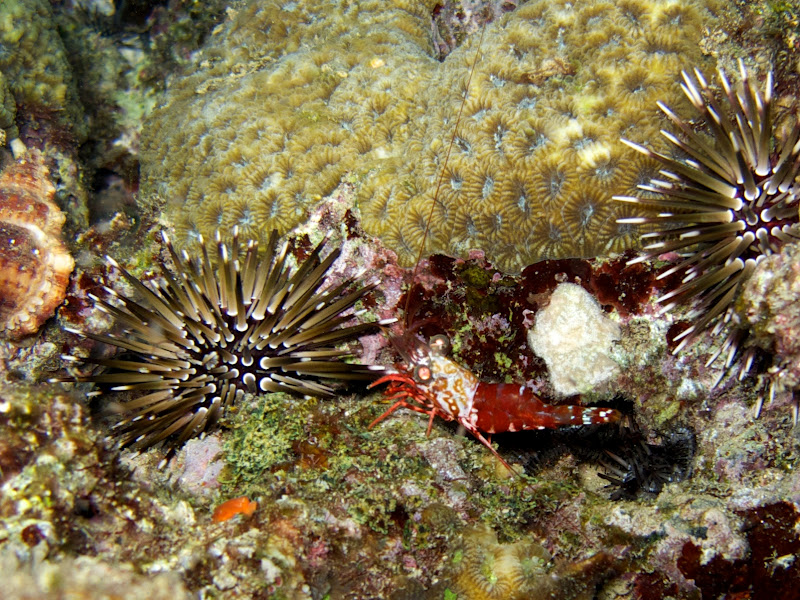 I was able to pick out a few animals before we surfaced.  One was a shrimp nestled in between some sea urchins.  I managed to get 2 photos before the shrimp made a break for a hole in the rocks.  I also spotted some sort of snail that was slowly making its way across the rocks.  It was difficult to get a decent picture of it’s head due to the angle of the rocks.  I could probably crop the picture down a bit but I like the way it looks as is. 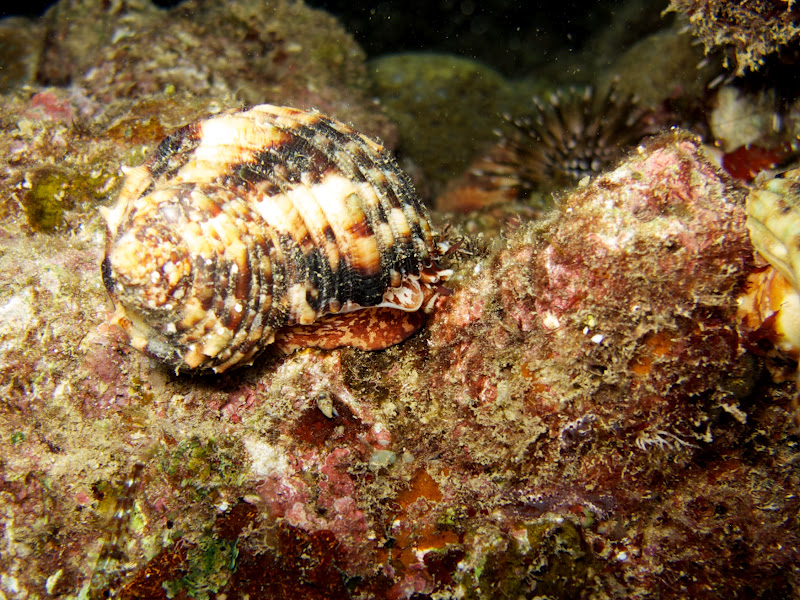 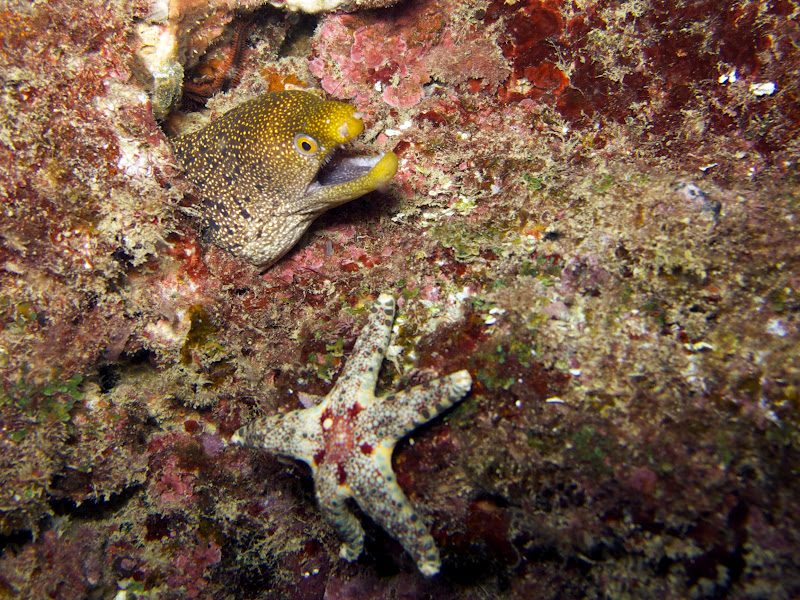 Ascending up the chain I noticed another eel watching us from above.  It was totally cool with me taking its picture so I snapped away.  After about 10 photos I continued up the the surf.  We all agreed that it had been a great dive while comparing all the cool things we’d seen.  Everyone agreed that tonight was “The Night Of The Eels.” 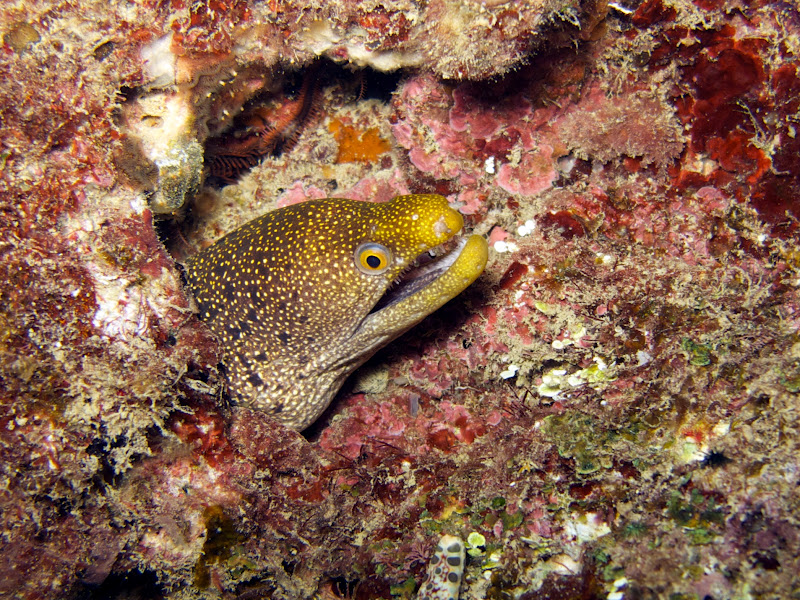 Eel Near The Chain

We kicked in on our snorkels but I told everyone to take their time because there are some great critters to be found in the shallows.  We slowly followed the chain back and on the way I noticed this weird sea cucumber-like creature.  I’d previously seen it so I wasn’t too surprised by it’s appearance.  I took some photos and I’m hoping someone in the local dive forums will be able to help me out in identifying what exactly it is. 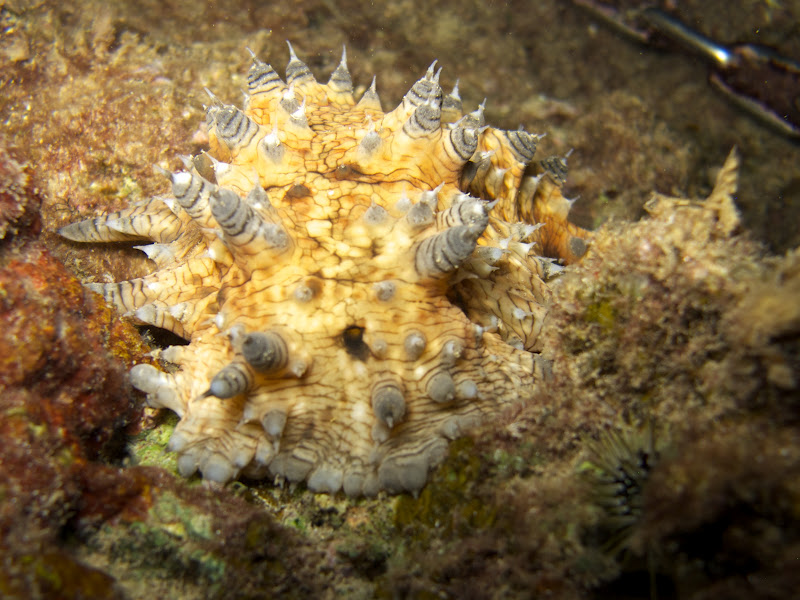 Congratulation to Joe, Morgan, Erica, and Kenderick on their night diver specialty certifications.  It was an absolute pleasure to dive with them and I’m hoping to meet up with them again in the near future.