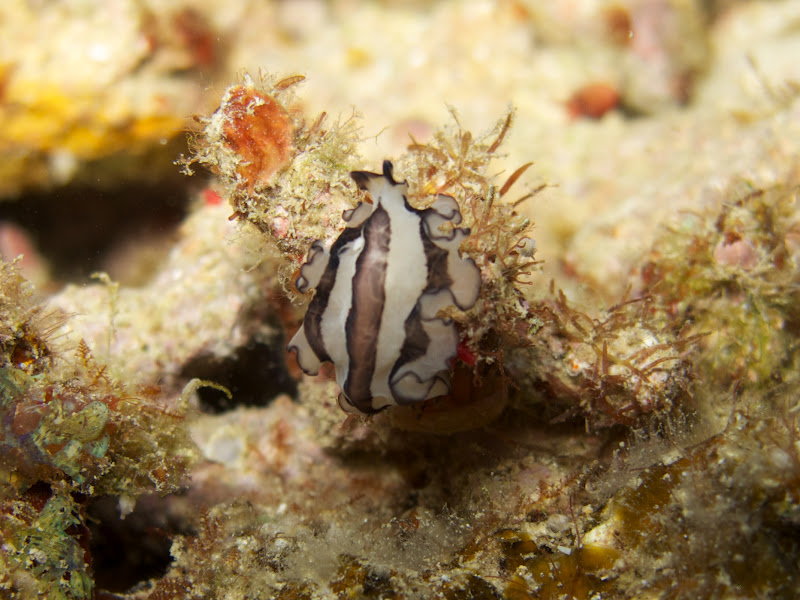 Just a few seconds (literally seconds) after we started kicking southward along the wall, I noticed a white and black striped flatworm resting on some rocks.  I motioned to James to come take a look and then I set up my camera to take a few photos.  As my light and flash were shining on it, the flatworm appeared to get agitated and it curled its body together.  I knew the if I kept the beam of light on it the flatworm would most likely swim away.  I decided to leave it alone and perhaps I could snag some more photos if it were still there at the end of the dive. 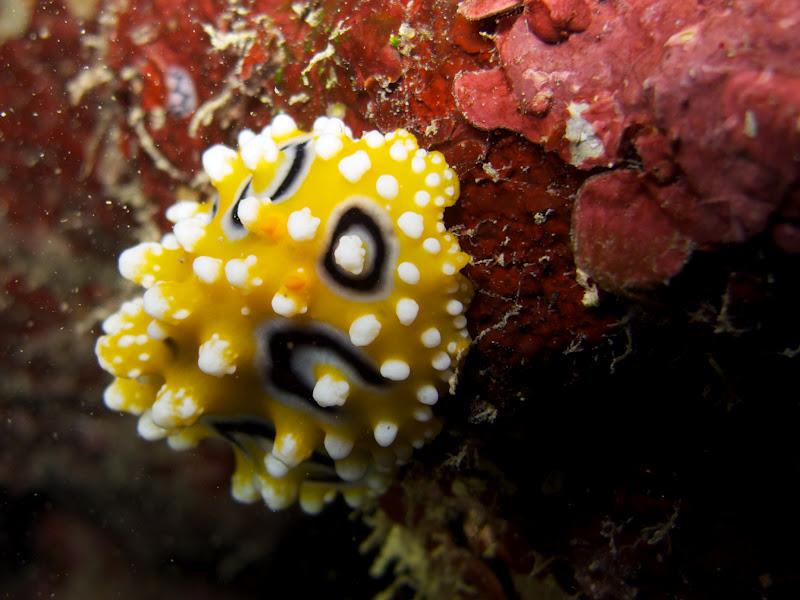 As we swam by some sea whips (I think) I noticed a tiny object moving on them.  I got in closer for a better look and saw a crab-like animal hanging out.  I’m surprised I even saw these little guys because they were very thin and no longer than 1 inch in length.  After showing James what I had found I took lots of photos.  It was difficult to get my camera to focus on the animal and not the sea whip…and I was fighting against the current to keep my camera steady.  James and I ended up seeing 3 of these things on the entire dive so all of my best photos are below.  I posted photos on several facebook groups asking what it was called and a gentleman named Shawn got back to me saying it was a Oncinopus araneus.  I tried to find more information about it online but all I really came up with is that this animal is a type of crab and it uses to the “fur” on its legs to catch particles out of the water.  Knowing this, I’m not surprised to find it hanging out on the sea whips because they preform a similar behavior. 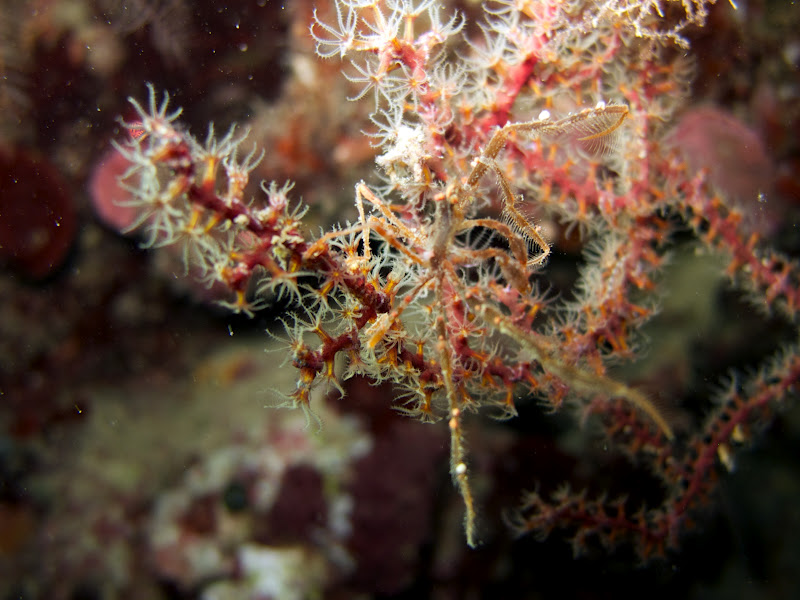 Oncinopus Araneus On A Sea Whip 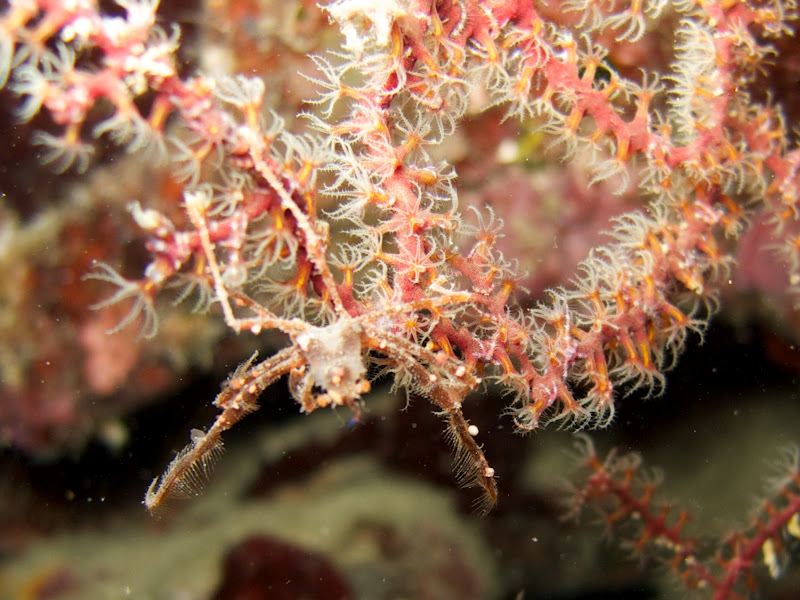 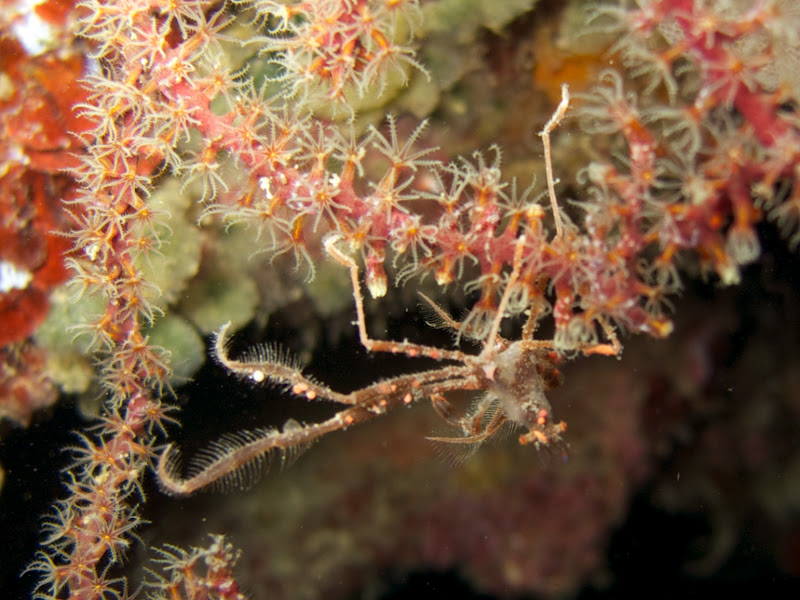 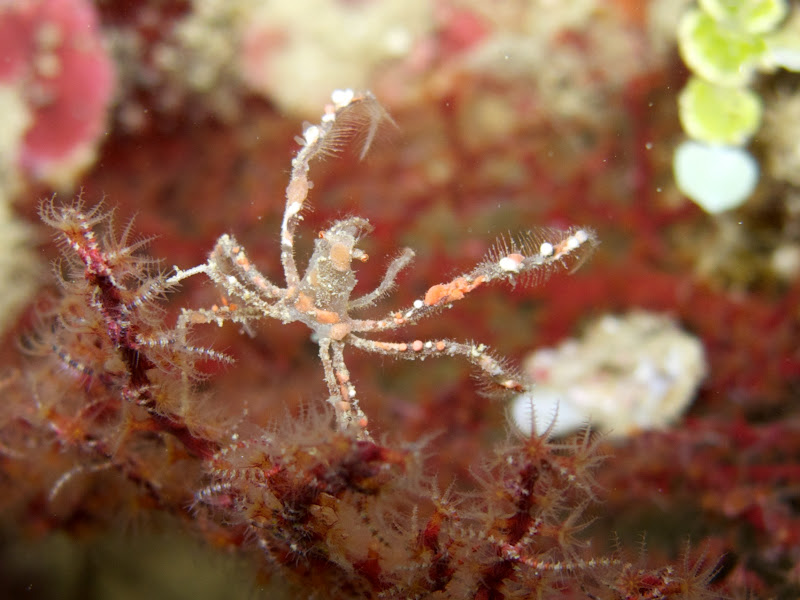 My favorite picture of the Oncinopus araneus is the above picture.  This little guy was really active in waving his legs around to catch particles of food to eat and I managed to snap the shutter button at just the right moment.  As soon as I previewed the photo on my computer I knew it would make for some good captions.  Below are some comments I recieved from my fellow Okinawa divers:

“Everybody was kung fu fighting…” – Myself

“WOOOOOOOOO ITS SOOO WINDY DOWN HERE if i didn’t have 8 legs i would get blown over!!” – Jon

“Everybody put your legs in the air like you just dont care.” – Josh

“I am a dancing machine watch me get down!” – Shawn 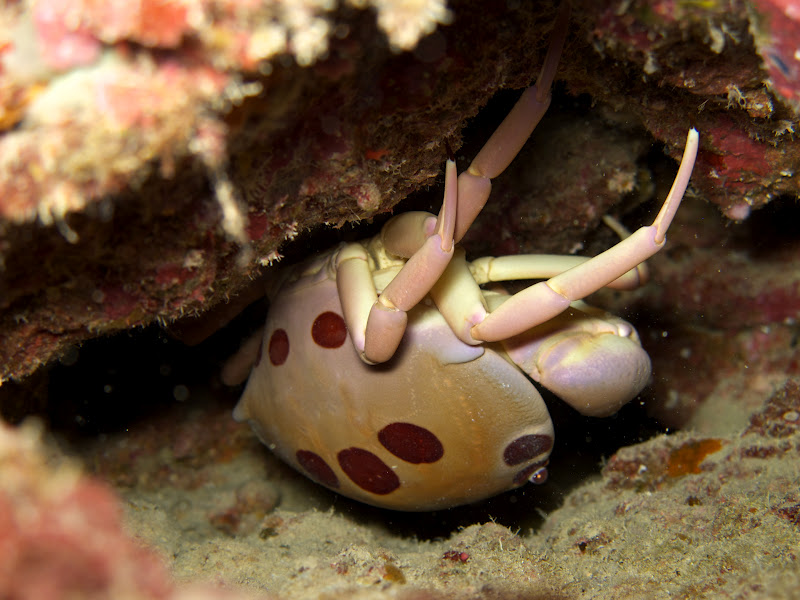 As James and I kicked along the reef wall we peered into the crevices and found some cool little critters.  The above picture is of a seven-eleven crab (Carpilius maculatus).  When I first spotted it, the entire animal was visible but by the time I got my camera turned on, it had crawled further into its hole.  I’m hoping to see it again so I can get a better photo of it because it was really cool looking with the red spots on its shell.

We also spotted lots of shrimp but the two photos below where the best ones to turn out from the dive. 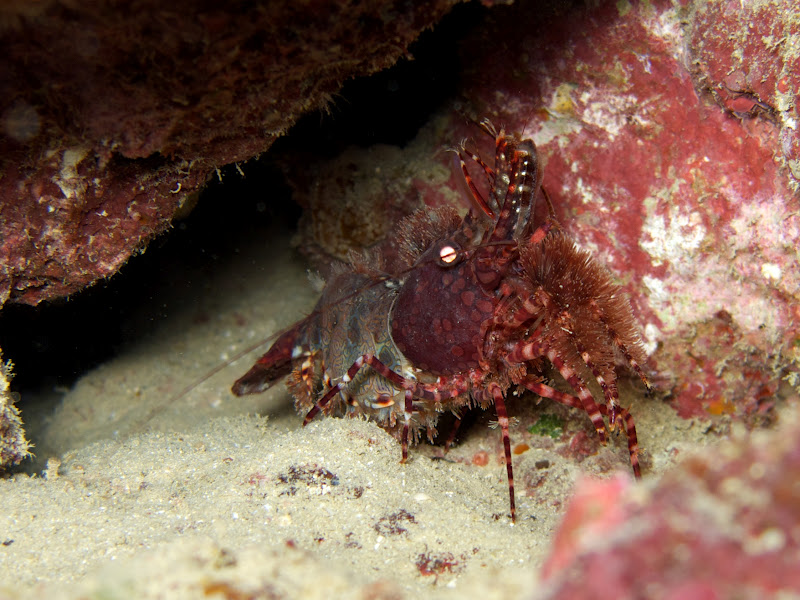 Shrimp Hiding In A Crevice 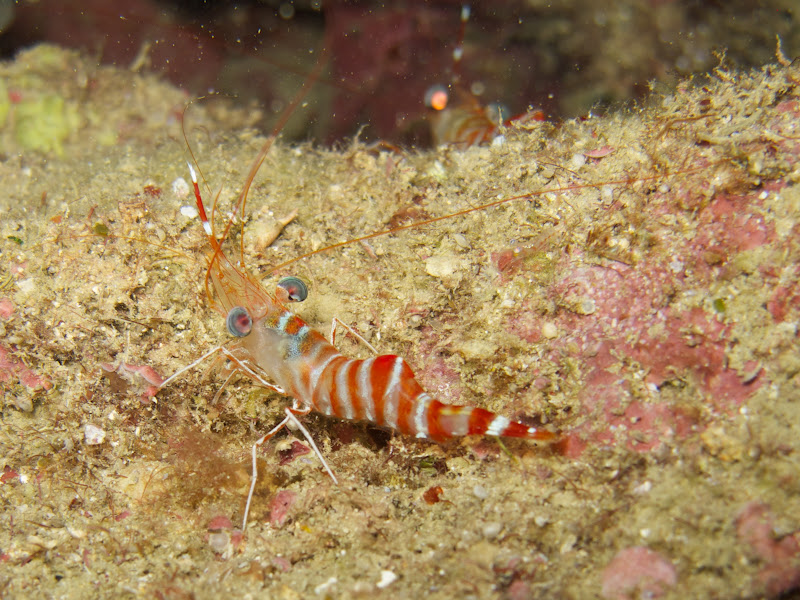 Shrimp Resting On The Sand

As we came to within 5 minutes from reaching the area where we’d make our ascent to the surface, I noticed a strange object sticking out of the sand.  I flashed my light on it and turned around to get a better look.  To my great surprise, I came face to face with an octopus.  I called James over by signaling to him with my dive light and then I immediately started taking photos.  After ever picture, I would inch a bit closer.  Surprisingly, the octopus didn’t change colors on me while I snapped away (often times they will change between a speckled white and red color),but after about 7 pictures he evidently had enough of the attention I was giving him and he crawled beneath the sand and disappeared.  I moved some of the sand where he had been sticking out from and noticed a very small hole into which it must have ducked into. 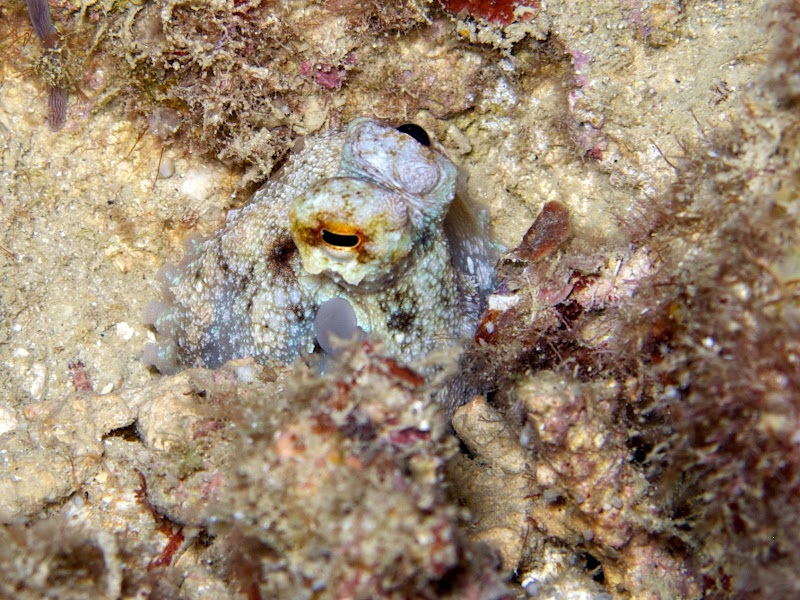 Octopus Hiding In The Sand 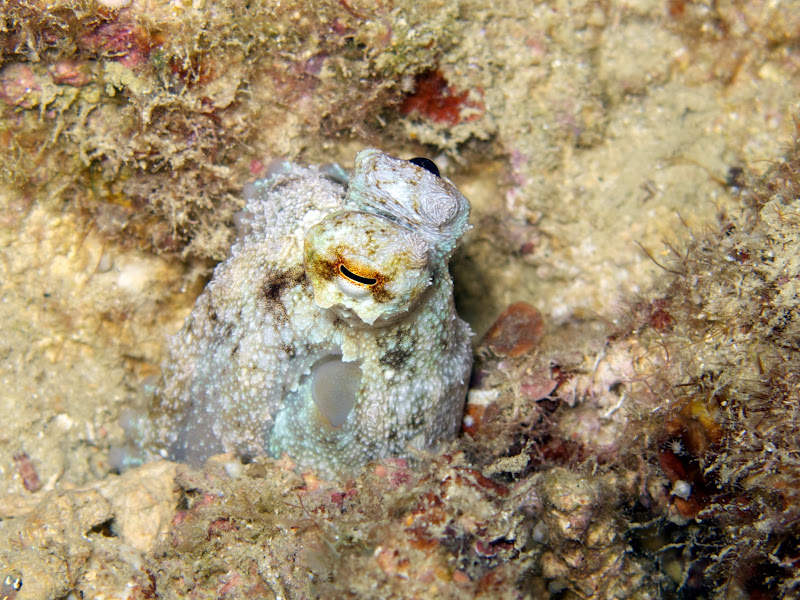 Close-Up Of The Octopus 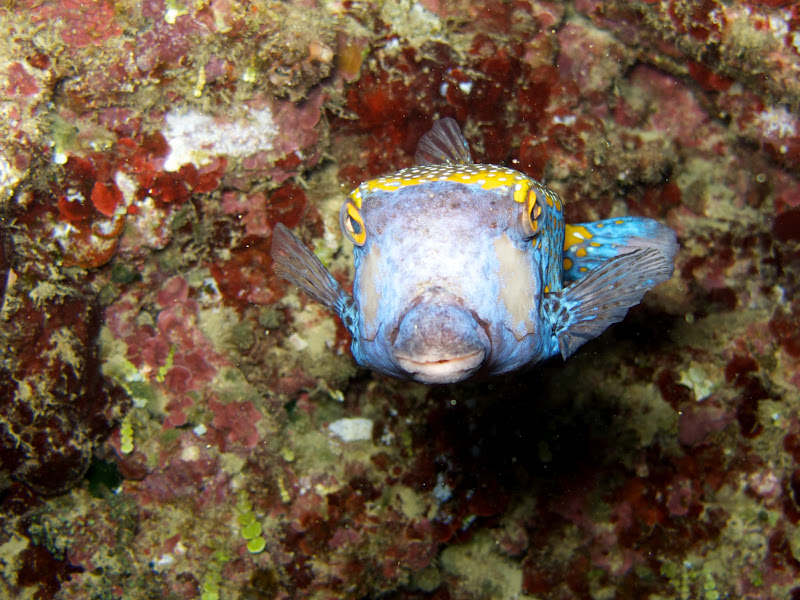 James and I also  managed to come upon a male spotted boxfish that was kind of awake…but not totally with it.  He kept swimming in a quick circular pattern while moving up and down the reef wall.  It was the weirdest thing.  I tried to snap a few photos of him but only one turned out.  Eventually, he came to rest on the bottom between some rocks and that’s when James and I decided to move on.  I found the above photo to be pretty hilarious so I collected captions created by my fellow Oki divers.  Here’s what they came up with: 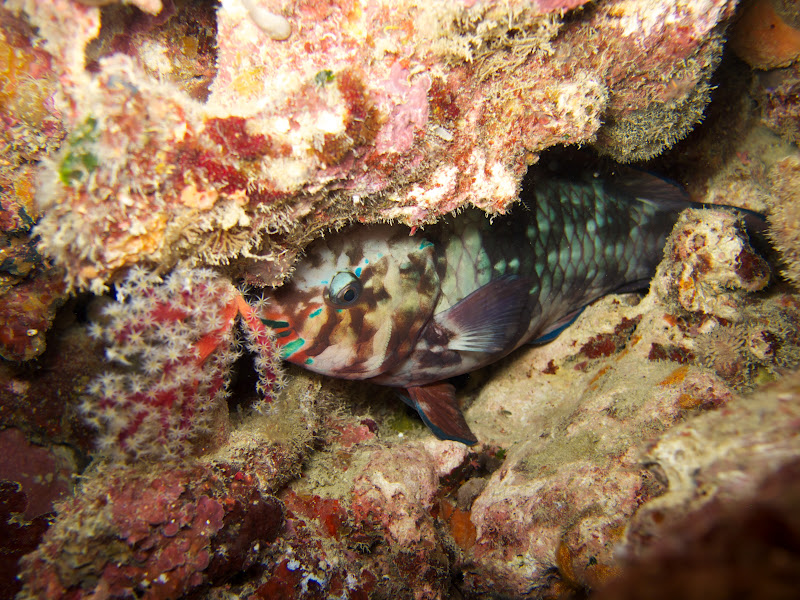 Another cool aspect with night diving is that you can often come upon fish that are resting/sleeping in the reef.  James and I spotted a few tonight and I though my photos of them turned out pretty cool.  Because they were sleeping, I was able to get in pretty close without them taking off on me. 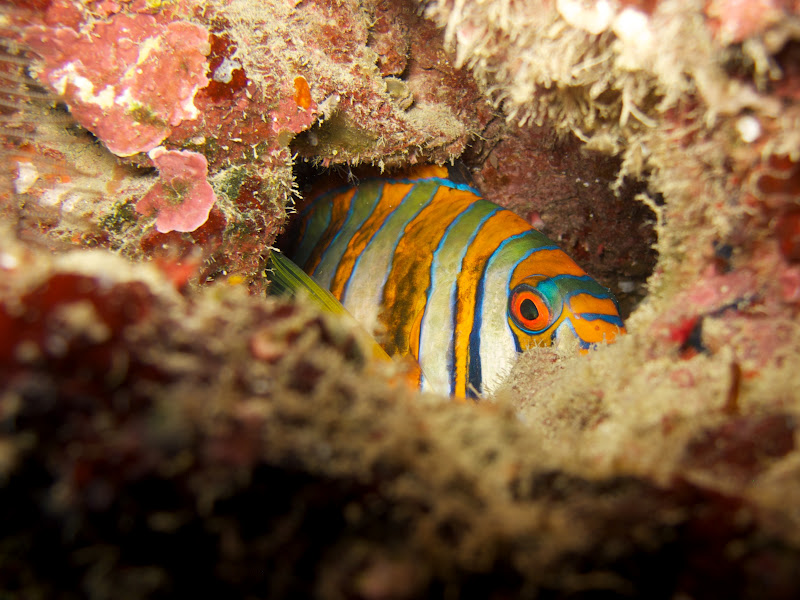 As we came back to where we made our entry, I kept my eyes out for the Pseudocebiceros gratus flatworm in the hopes that I’d be able to take a few more photos.  I was in luck because it hadn’t moved a single inch from where I had seen it previous.  I snapped a few more photos and this time the flatworm took off after about 30 seconds of my light shining on him.  even with him swimming through the water I was able to capture a nice photo.  Satisfied with the dive, James and I ascended to 15 feet to make our safety stop.  On the surface we high-fived each other and then swam to shore while talking excitedly about all we had seen. 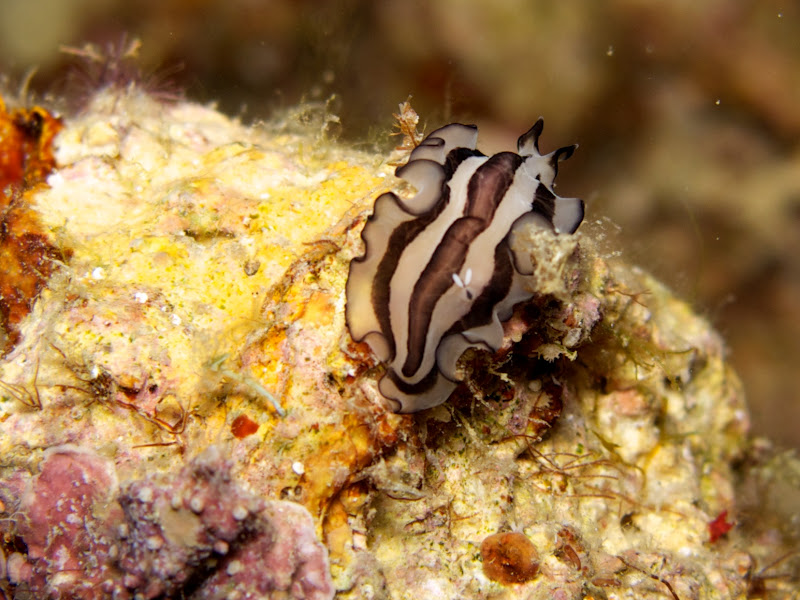 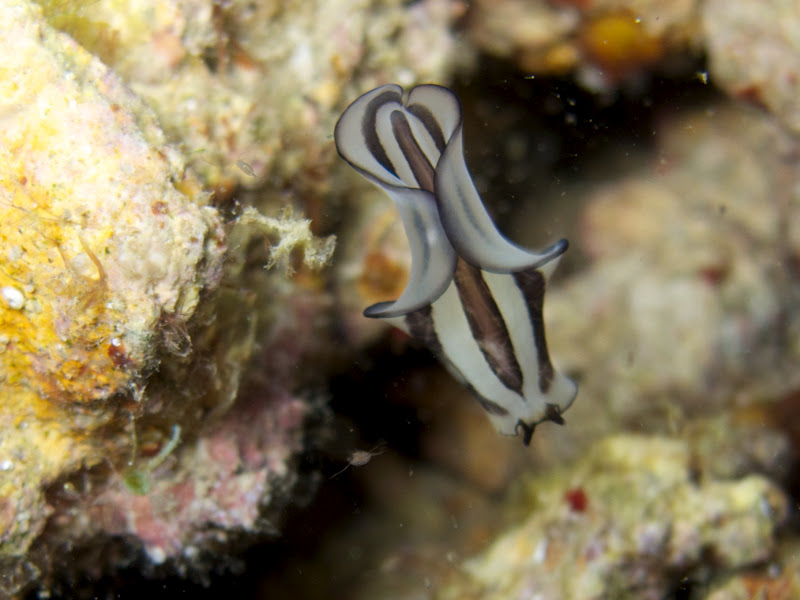 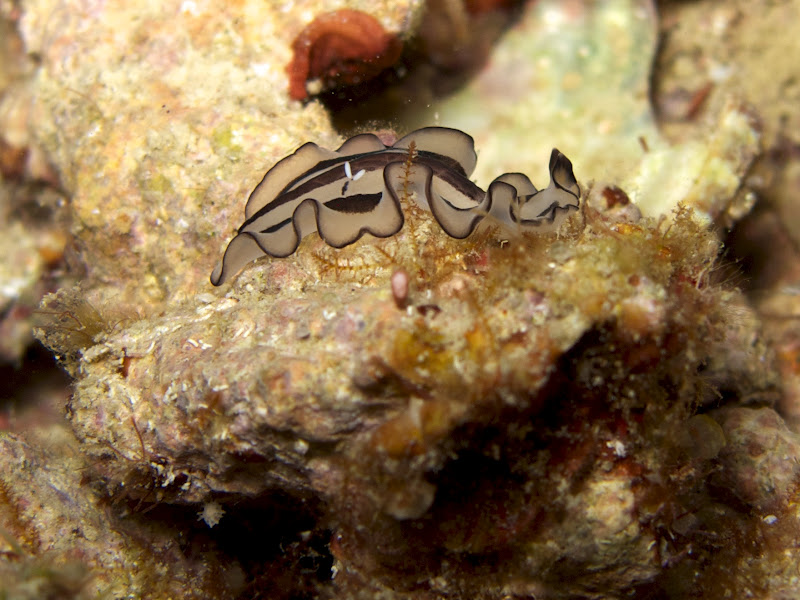