I met up with my good friend Holly to do some diving at Maeda Point.  It had been a while since her last time diving so we kept our dives easy and shallow, but we weren’t disappointed.  On our first dive I spotted a new species of nudibranch (add one more to my total count!) and on the second we saw a orange frogfish.  In over 200 dives here in Okinawa, this is the first time I have ever seen one.  We were PUMPED about our discoveries!!!!

For our first dive we headed to the south.  There wasn’t a current so it made for an enjoyable dive.  We stayed at a depth of about 40 feet for the entire dive.  There were lots of fish and we managed to have a neat encounter with a rather large trumpetfish.  He was tucked into some rocks so I only managed to get a few good photos of him. 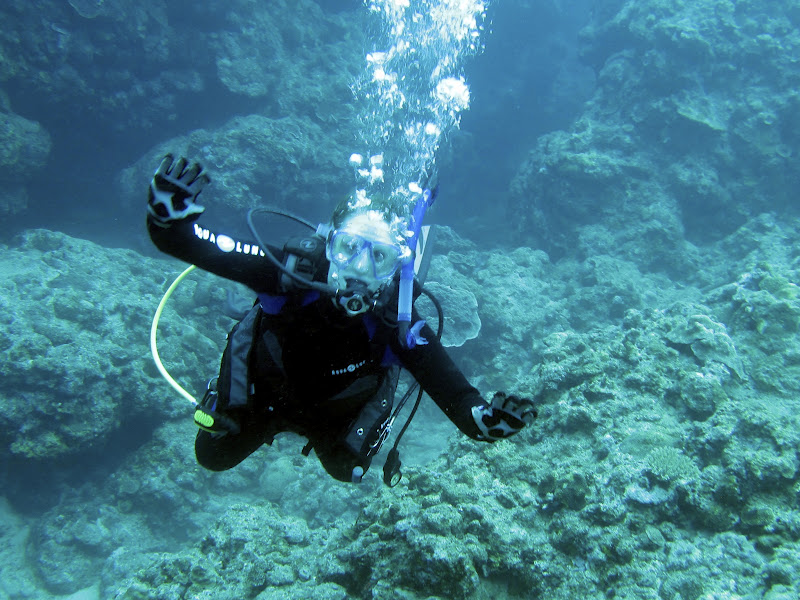 After I pulled the pictures of the trumpetfish up onto my computer I noticed a small nudibranch on the rocks behind him.  Kind of funny that I noticed it out of all the things in the background. 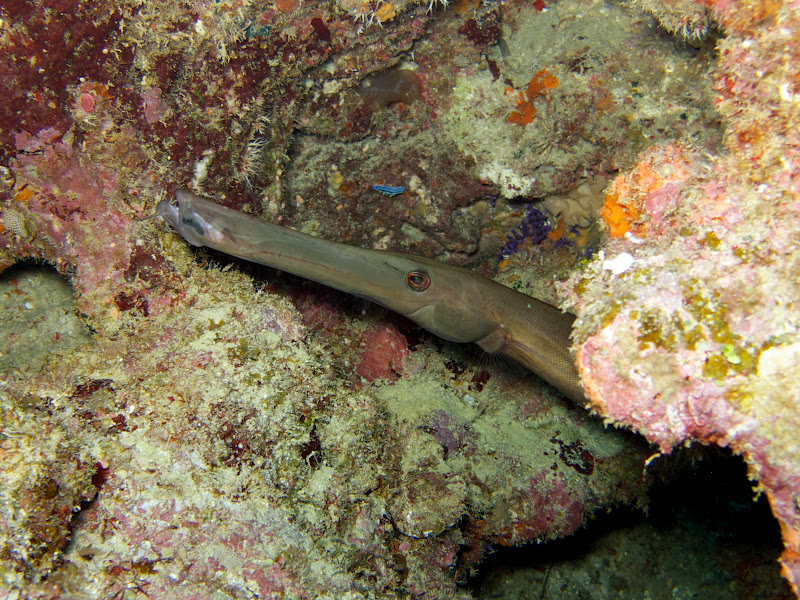 During our dive I was on the hunt to find nudibranchs.  Unfortunately, I didn’t come across very many species.  The one noteworthy sighting I did have involved two Phyllidia coelestis nudibranchs with their right sides touching.  As Randy Birt informed me a while back, the sex organs on a nudibranch are located on the right side of their body.  This leads me to believe that these two nudibranchs were mating at the time the below photo was taken. 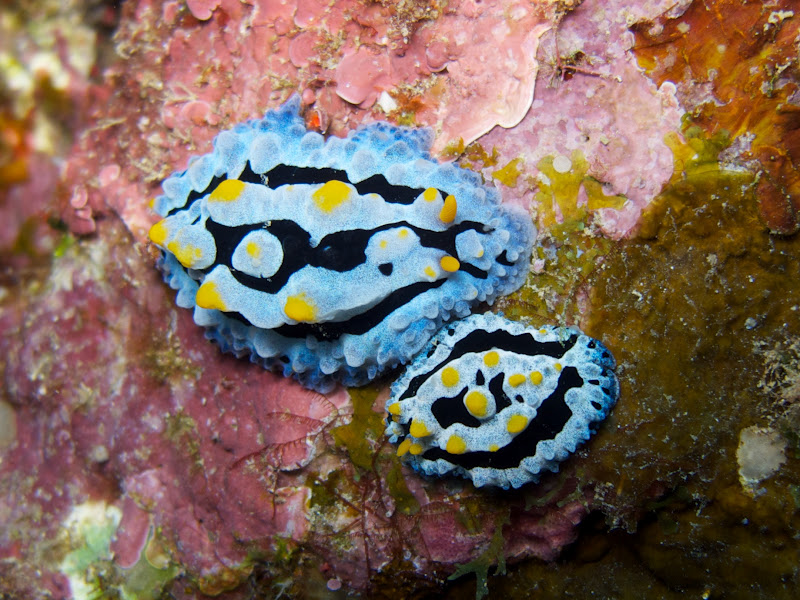 About halfway through our dive, we came into an area where there was a lot of broken coral.  My heart sank as I thought that our dive would get boring and we wouldn’t see anything interesting.  We pushed on through the water and I scanned over the coral with little hope.  Suddenly, I saw something that appeared to be a nudibranch that had a white body with dark red spots and a purple border.  I wasn’t sure because it was positioned under a rock so I lowered down a few feet to get a better look.  As I got closer, I definitely felt my excitement level rise.  I had just found another new species of nudibranch to add to my count (still don’t know what it is by the way). 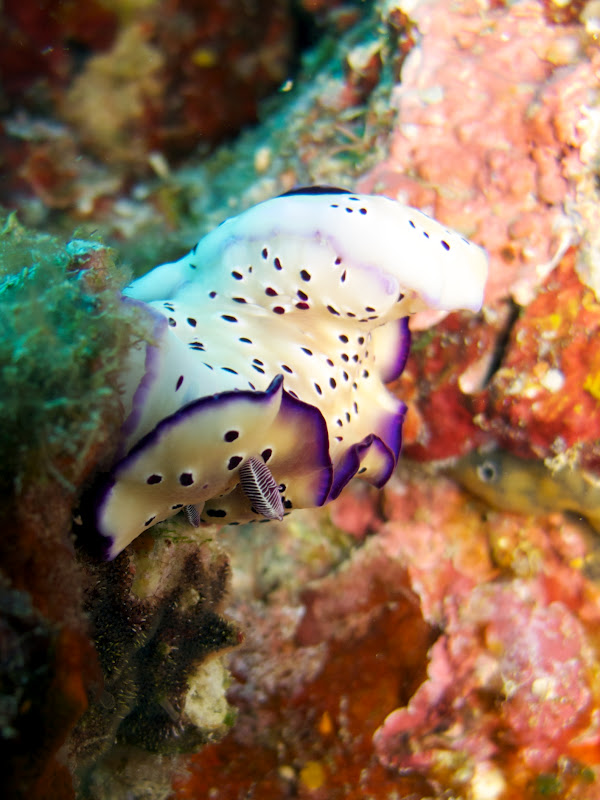 Risbecia Tryoni Nudibranch On The Underside Of A Rock

I waved for Holly to come over and check out my discovery.  As the nudibranch crawled around I went photo-crazy and snapped away with my camera.  Because it was rather large in size, probably about 3.5-4 inches in length, I managed to get some really nice photos.  My flash was also firing properly so I didn’t have to mess around with it at all (so nice!). 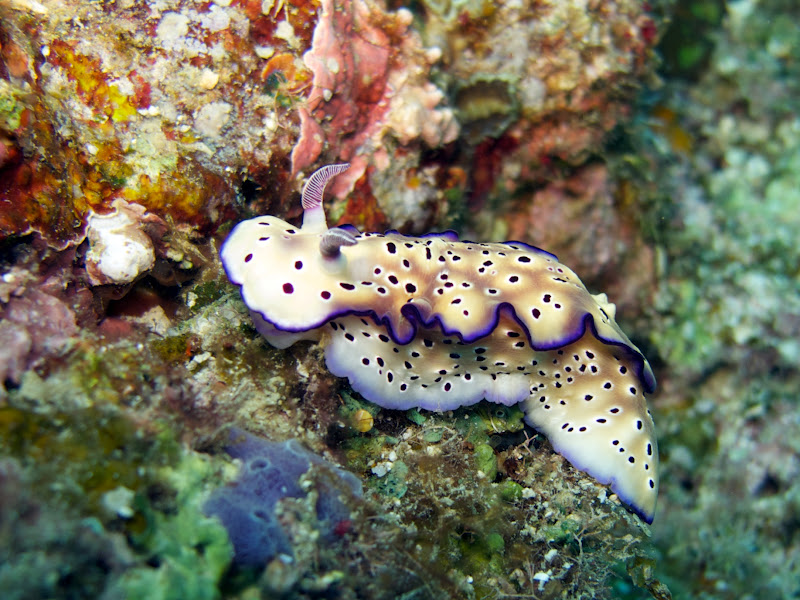 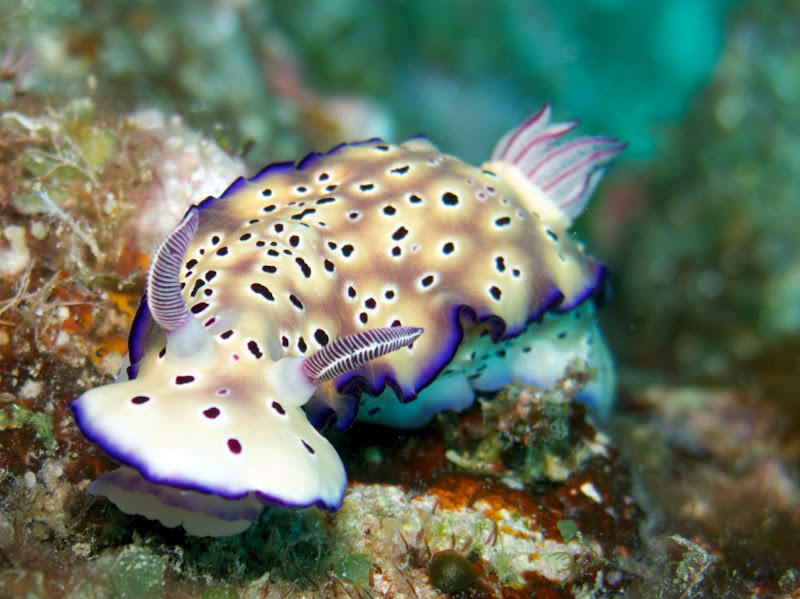 I posted the above photo for ‘Create a Caption” and received only a few replies from local divers (but they were still really good):

“Ahhh perfect! Now if I can just hold absolutely still until ‘All my children’ is over.” – Randy 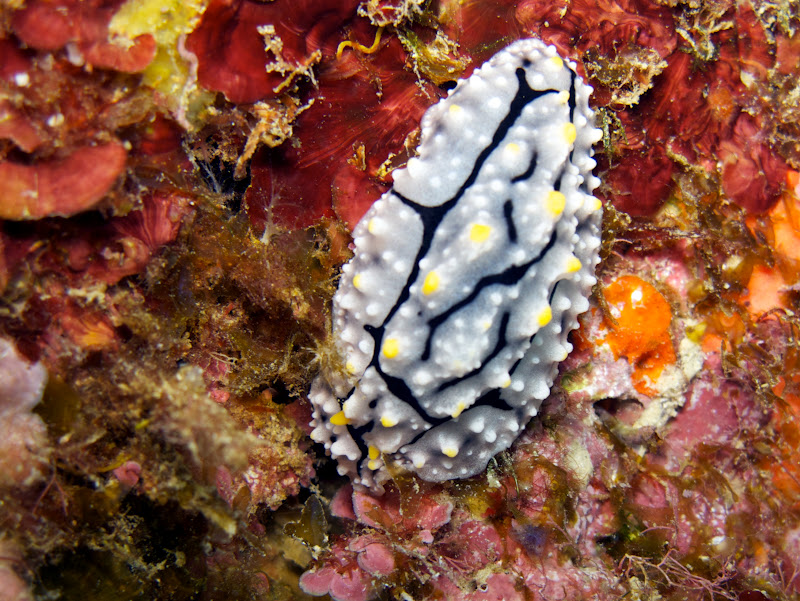 After taking pictures to my hearts content and draining our tanks to 1500 psi, we turned around and started heading back to the chain to make our ascent.  Along the way I spotted a Phyllidia elegans nudibranch along the rocks.  I’ve maybe seen this nudibranch about 4 times previously so it was still exciting to see it again. 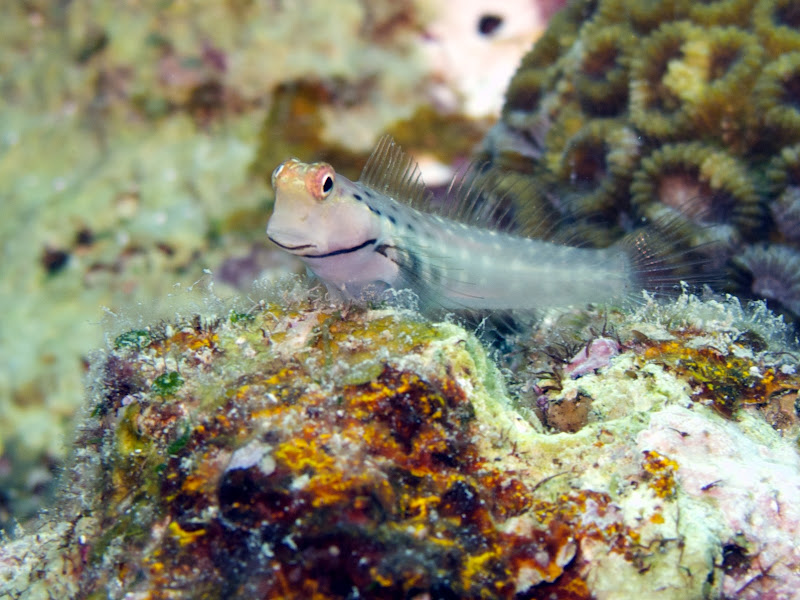 The last great sighting for our first dive was of a Phyllidiella Sp. 1 Nudibranch.  When I spotted it, I originally thought it was a Phyllidiella pustulosa but as I got closer something about it just said, “This is different.”  It was only after I got home and made the identification did I realize I had spotted this very rare nudibranch.  Once again, I managed to identify a new species for my personal sightings.  Very cool! 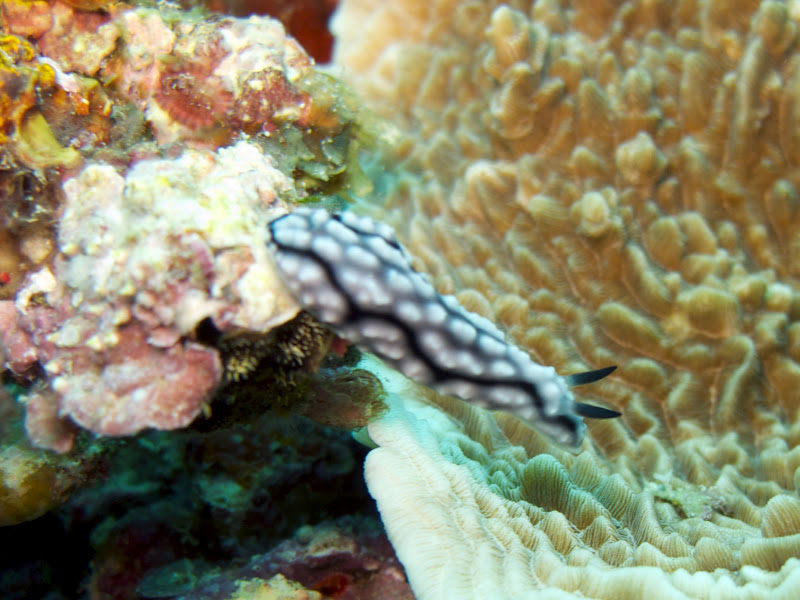 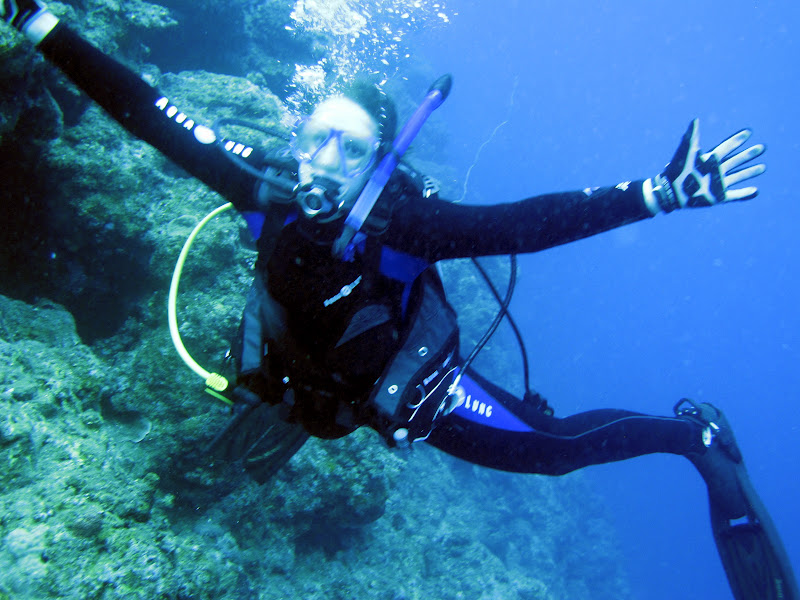 Holly Having Fun At Maeda Point 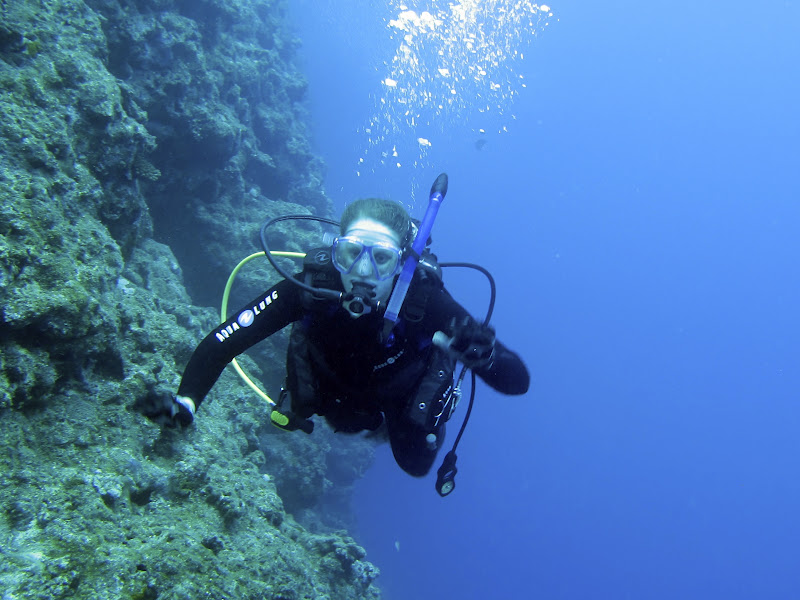 Heading Back To Our Exit Point

After making our exit, we swapped out tanks and then relaxed at the car for a bit.  We hadn’t seen each other for at least 9 months so we had a lot to catch up on.  When discussing what to do for our second dive, I suggested heading north and Holly agreed.  As we headed down to the water both of us were excited to see what our next dive would hold in store for us. 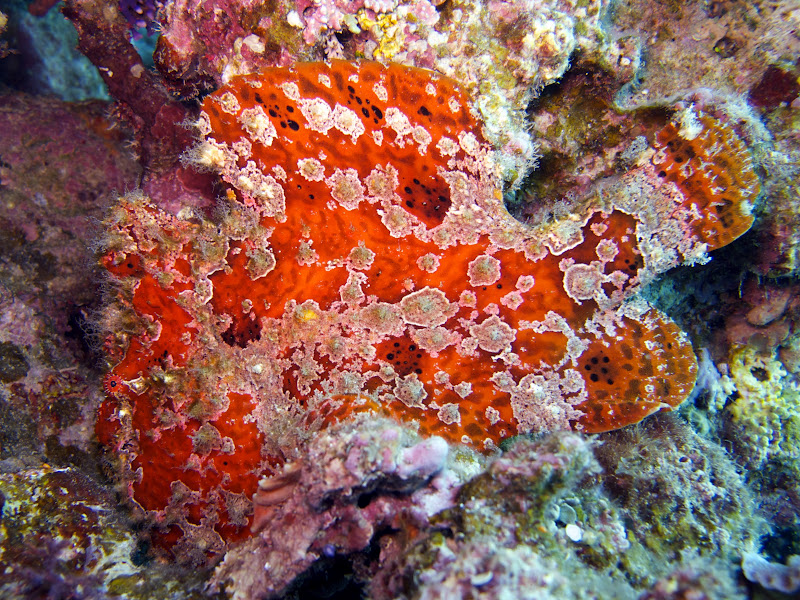 I Noticed Something Orange Colored Sticking Out From The Rocks

To be honest, the first half of our second dive was very uneventful.  I didn’t spot any nudibranchs that were particularly interesting or any fish that caught my eye.  Just a few minutes before it would be time to turn around, I noticed something large and orange wedged in between two rocks.  I slowly swam closer to see what the odd object was and when I was overtop of it, I realized I had just stumbled upon a frogfish.  I signalled to Holly that I had found something really awesome and she swam over to look.  As it turns out, Holly initially though I was pointing to some coral but then realized it was a fish when it started to move around.  I imediately started photographing the frogfish and it slowly moved into a position where it was facing us head-on.  It opened its mouth and showed us what appeared to look like really sharp teeth.  Holly and I looked at each other and I’m pretty sure our eyes were the size of our masks….it was awesome to say the least. 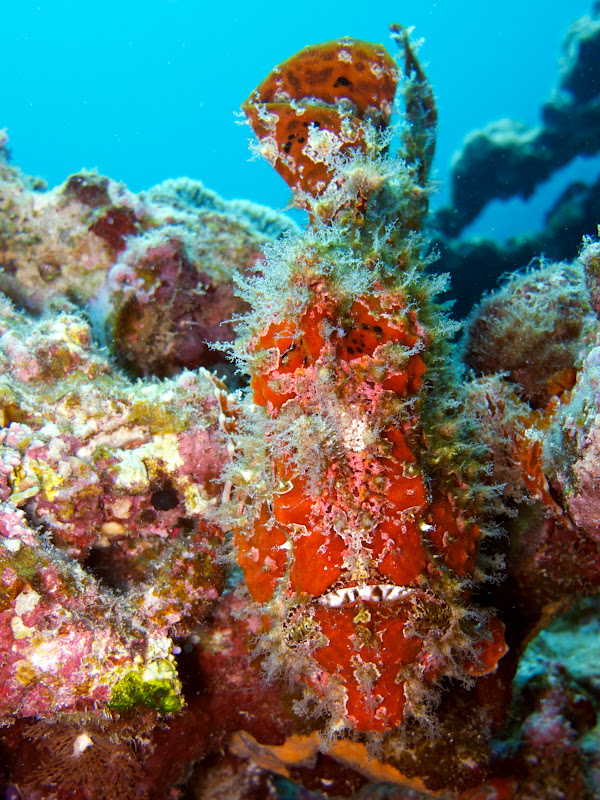 Smiling For The Camera

After digging up some information about frogfish, I learned that they do have teeth but I don’t think it’s what Holly and I saw.  The frogfish posed for a few photos and then it would switch positions on the rocks.  It was really neat watching it use it’s fins to walk on the rocks.  I wish I could have been taking video while also snapping photos.

Why all the excitement over a frogfish you might ask.  Well, I’ve done over 250 dives in Okinawa and this is the first time I’ve seen a frogfish.  Did Holly enjoy seeing the frogfish?  Absolutely!  And after telling her on the surface how rare it was to see them, she was definitely impressed with our discovery. 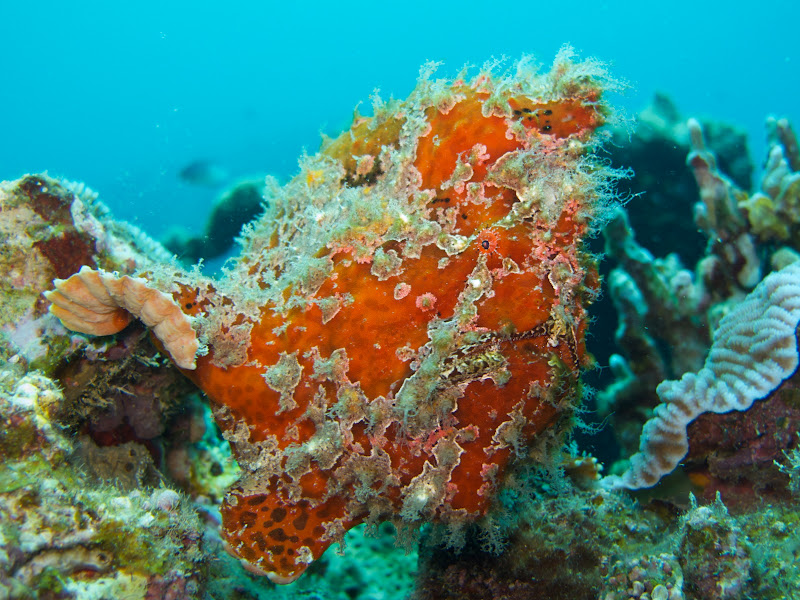 Freckled Frogfish Walking On The Rocks 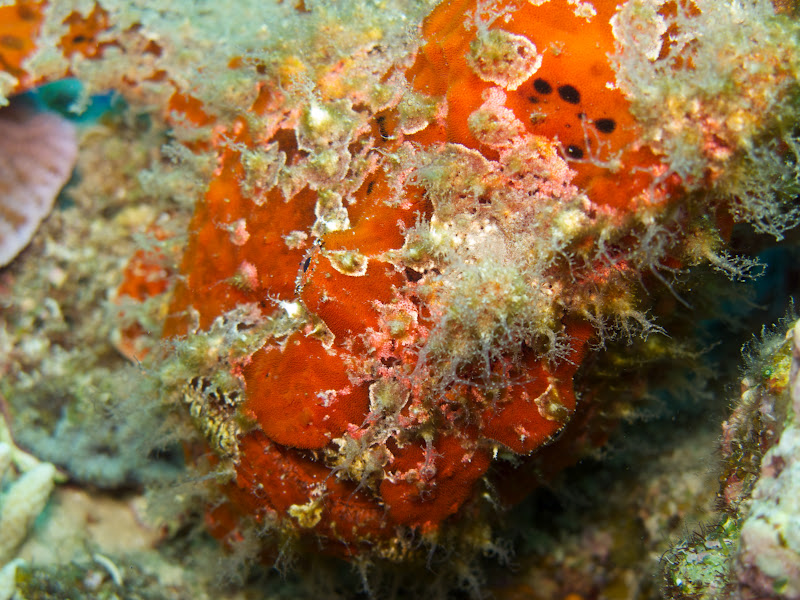 Here are some cool videos I found online about frogfish:

After spending the maximum amount of time we could enjoying watching the frogfish, it came time to start heading back.  We pretty much made a straight shoot back to the chain because we didn’t have much air to spare.  While kicking back we continued to look for cool creatures and I saw a Giant Moray sticking its head out from a crevice.  I motioned for Holly to come check it our and I took a few photos.  We couldn’t stay long though so soon we were right back to making our way to the exit. 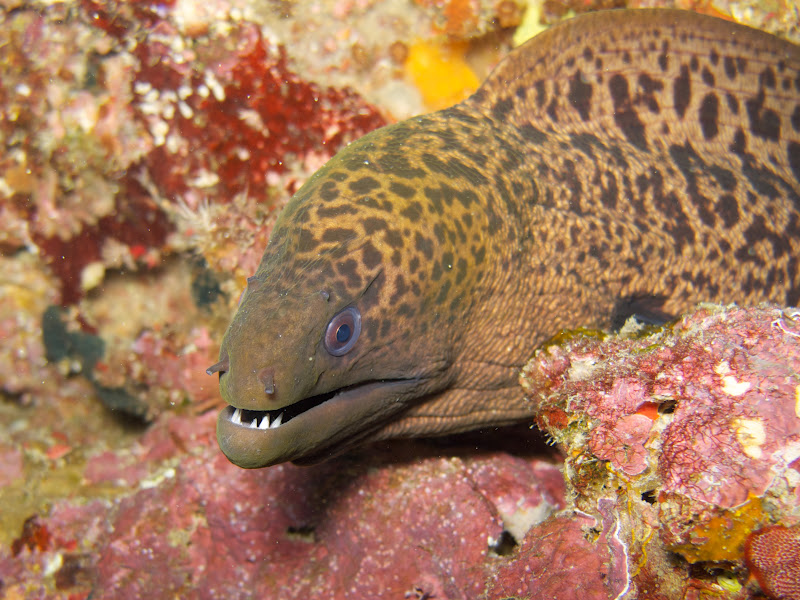 Giant Moray – What Pretty Teeth You Have! 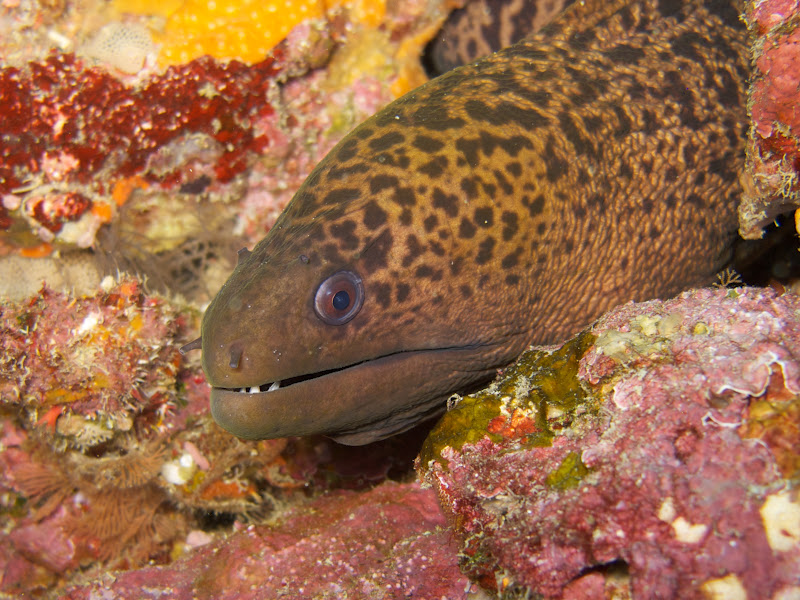 At the end our of second dive, Holly and I were really impressed with what we had seen.  I couldn’t wait to get a look at my photos once back at home…I knew I had some good shots.  Diving with Holly was great and I hope to go out again with her soon.  My teaching schedule is going to be super busy in July but I’m hoping to set up a few night dives with her when we each have some free evenings!