James enjoyed Maeda Point so much that he suggested we go take another look at it.  No problem!  We decided to make two dives, each no deeper than 45 feet, since we were trying to extend our bottom time as much as possible.  We spotted several nudibranchs, and among them were types that are very rare for Okinawa.  Being a nudibranch hunter, let’s just say I was very excited at the completion of each dive.

We started off our dive by going down the chain and then heading north.  As I kicked besides the rocks, I noticed two beady little eyes watching me from above.  My eyes focused on a tasseled scorpionfish and I decided to back up a few feet to take the below photo.  Can you spot it? 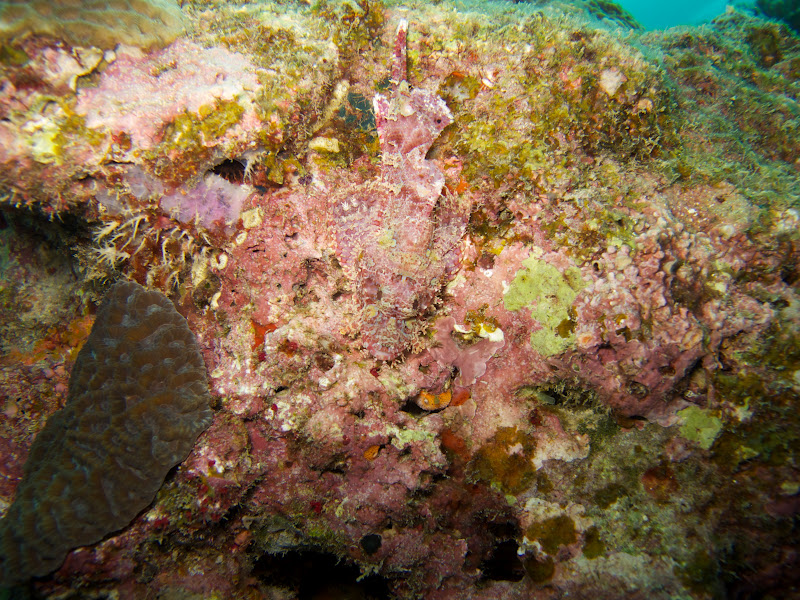 Can You Spot The Tasseled Scorpionfish?!

If you look in the top center of the photograph, you should see it’s tail and then as your eyes move downward its body and head.  It was positioned completely vertical on the rocks just waiting for an unsuspecting fish to pass underneath it.  Very clever, right?! 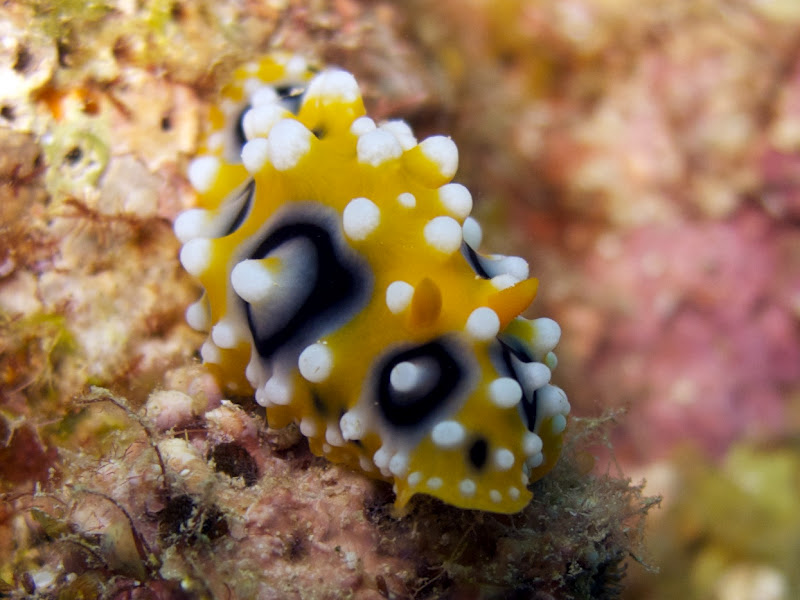 While kicking around 40 feet I noticed a Phyllidia ocellata nudibranch resting on the edge of a rock.  I set up my camera and managed to get some really nice photos.  In the past, I’ve seen these nudibranchs crawling across dead, white coral and it seems like my flash is always washing out the back half of the nudibranch.  Thankfully, this didn’t happen today so I really enjoyed looking through the various photos I took. 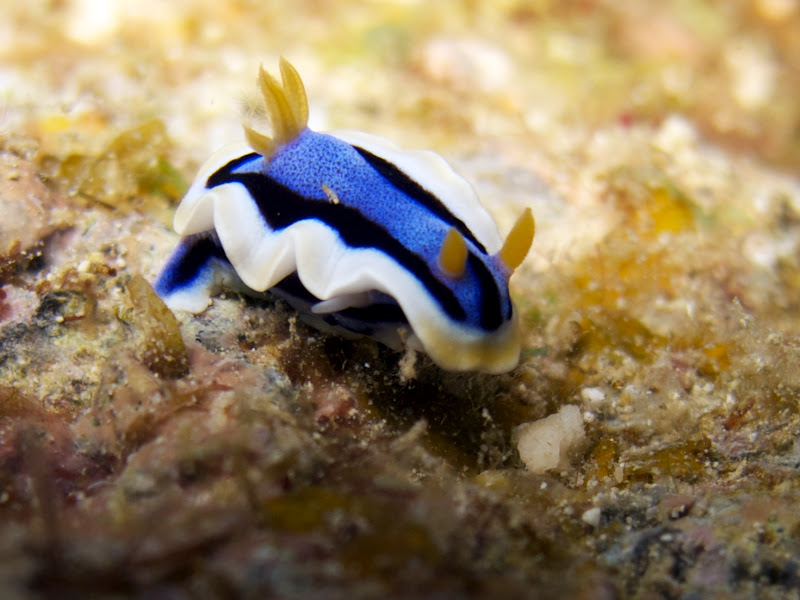 About 5 minutes later James and I were kicking around a rock finger and I noticed something tiny and blue clinging onto a ledge.  I swam in to get a better look and confirmed it was a nudibranch!  It also appeared to be of a species I’d never seen before so I was pumped!  WOOOOT!!!  I zoomed my camera lens in and kept the setting on macro.  It took a little bit of work for the flash to fire correctly and for me to get the nudibranch in focus but eventually it all worked out.  Once back home I cross referenced Robert Bolland’s Okinawa Slug Site and the facebook group Okinawa Nudibranch Round-Up and decided I has spotted a Chromodoris annae.  This is apparently a very rare type of nudibranch in Okinawa.  WOOOOT WOOOOT!!!!  Robert Bolland mentions on his website that he’s only come across this species 3 times throughout his many years while researching nudibranchs on Okinawa. 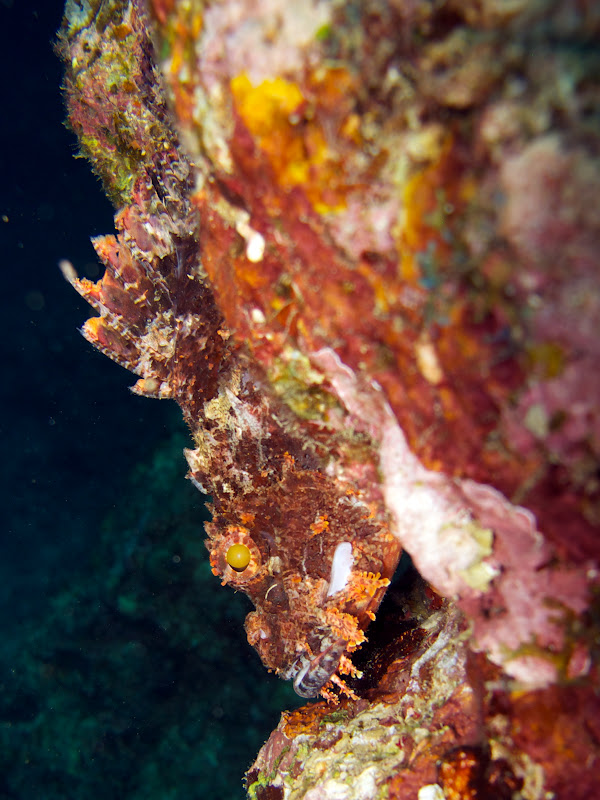 Scorpionfish Waiting To Surprise Its Next Meal

We didn’t see much on our return to the exit.  Of course there were tons of fish but I wasn’t really in the mood to photograph them – they always want to turn and show me their butts right when I hit the shutter button.  I decided to snap a whole bunch of pictures of my wonderful husband instead.  I knew he wouldn’t be flashing me his butt underwater! hahaha  I got some nice shots of him wearing his new Hollis M-1 mask.

Before our dives today, we stopped in at Kadena Marina’s Scuba Locker so James could try out their masks.  We had purchased two different masks in the past but they weren’t a very good fit.  Although looking to be alright in the store, once James wore them underwater they pinched and pushed in all the wrong places – pushing up on the underside of his nose so he looked like a pig and also on the bridge of his nose which caused painful headaches.  Talk about uncomfortable!  I’m surprised he’s enjoyed diving so much even with all the pain and discomfort!  Once in the shop he tried on several different models and selected the Hollis M-1.  I thought it was a great purchase.  It’s a frameless mask so it’s easy to fold flat and it has a great field of view.  Additionally, the mask skirt seemed to be made of the same material that’ used on my Oceanic Shadow Mini – primarily a super soft silicone that’s hypoallergenic.  I can’t say this definitively but there seems to be various materials used on mask skirts.  Based on my experience, it seems like the most comfortable mask skirts are made with this really pliable, super soft silicone.  Just my two cents for anyone interested… 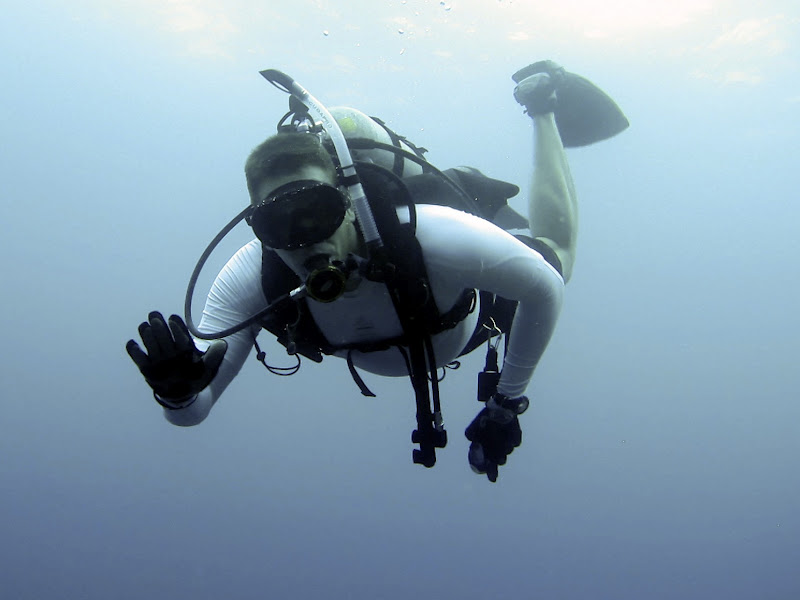 The photo below is another example of what some nudibranch enthusiaists believe to be a coloration change in the Chromodoris elisabethina species.  It looks somewhat like a Chromodoris colemani except there is a little bit of blue around the branchial plume and also on the tail.  Little details like this have led me and others to believe this species has been slowly changing color the last few months. 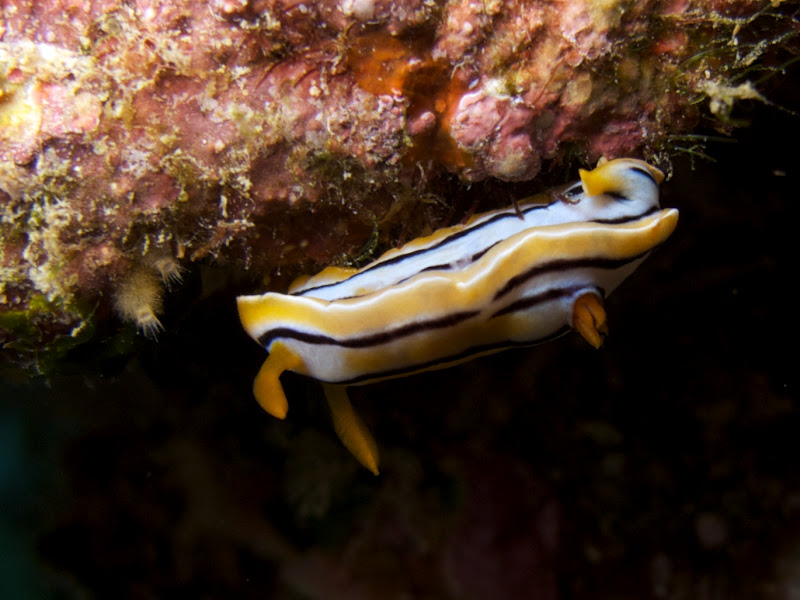 While completing our safety stop at 15 feet I was looking over the rocks to see if I could make any last minute finds.  Unfortunately, nothing was to be found so i turned around to motion to James that I was ready to go up.  Hovering upside down and very close to me was my husband.  Turning around and seeing him “chilling out” upside down was hilarious.  I snapped a picture and then we ascended to the surface. 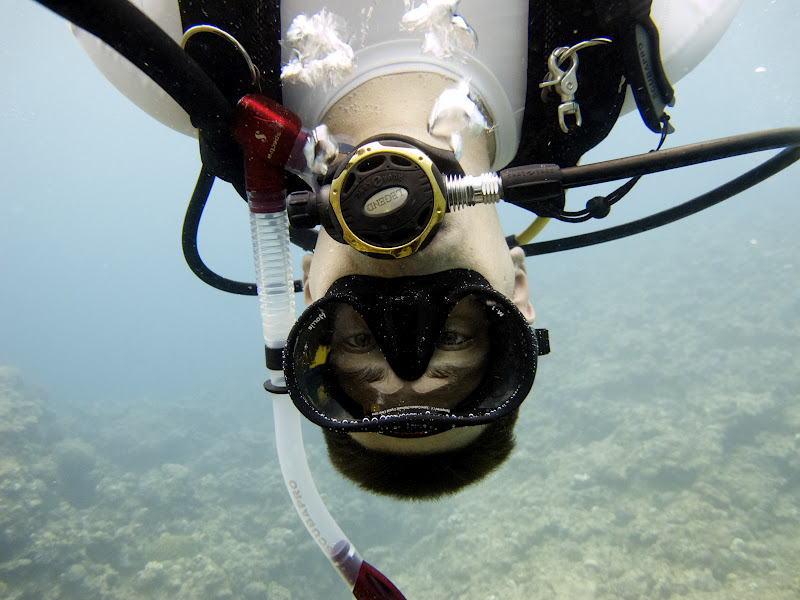 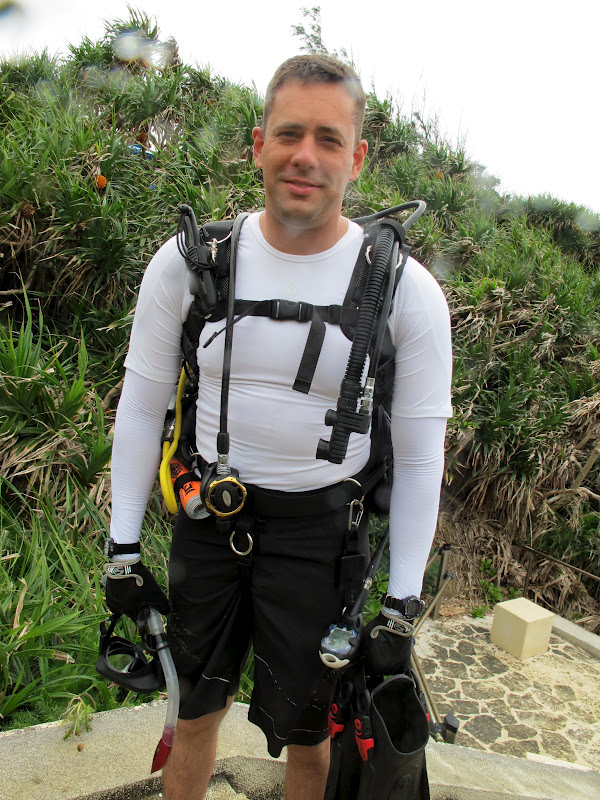 James About To Go On A Second Dive

After grabbing some food to eat (the taco rice is pretty good in the little concession stand), James and I headed back into the water.  We decided to kick out to the first northern buoy that’s near the enterance and then make our descent.  We figured doing this would probably save us about 5 minutes of bottom time and would allow for further exploration to the north. 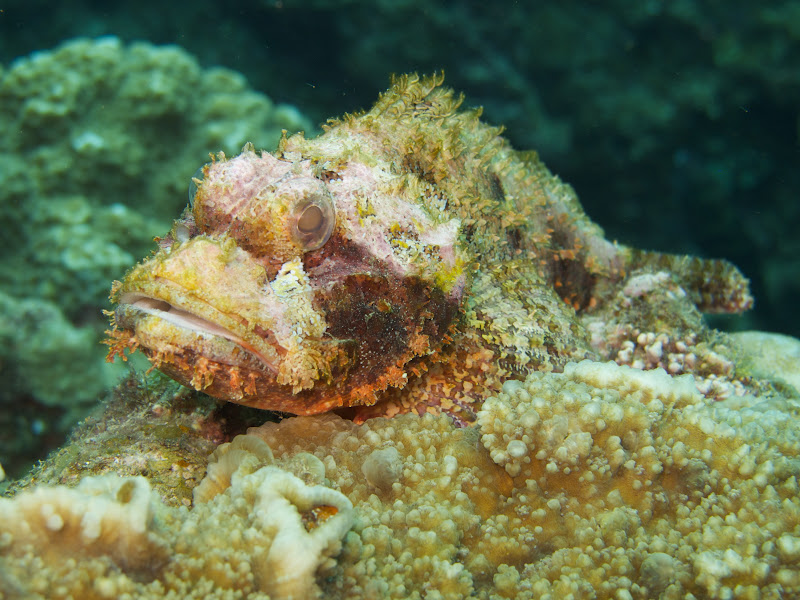 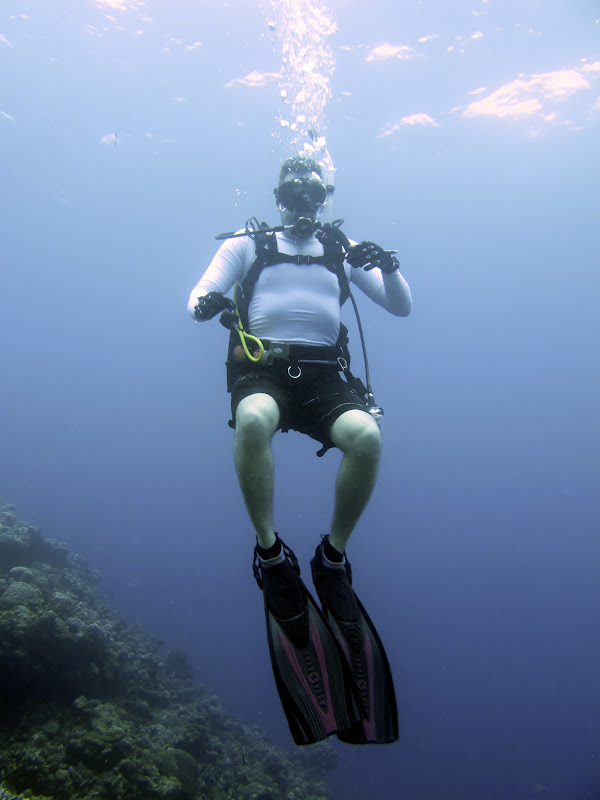 Kicking over an area of broken, dead coral was actually pretty interesting because I spotted an ridiculously large Phyllidia varicosa nudibranch.  It was easily 5 inches long.  Even though the Phyllidia varicosa nudibranch is super common in Okinawa, I was still really impressed by how large this particular animal had grown.  Most of the time there are about 1-2 inches in length. 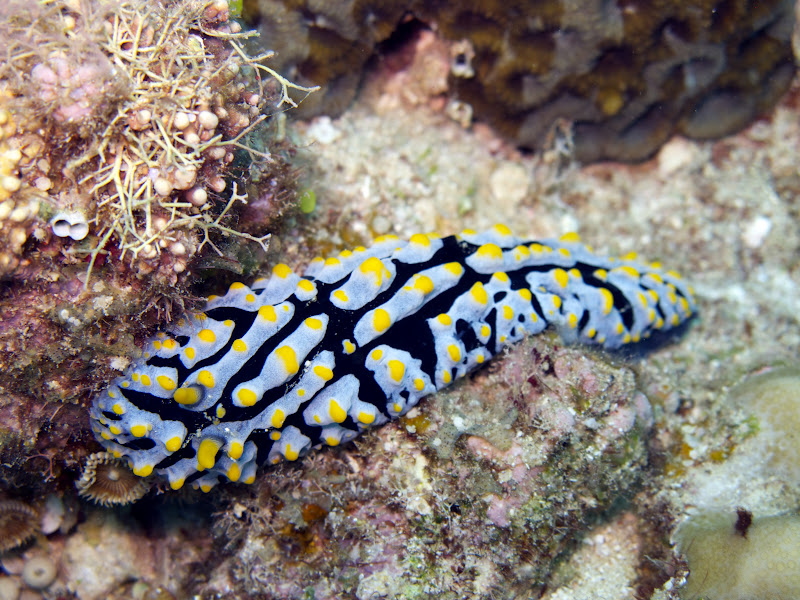 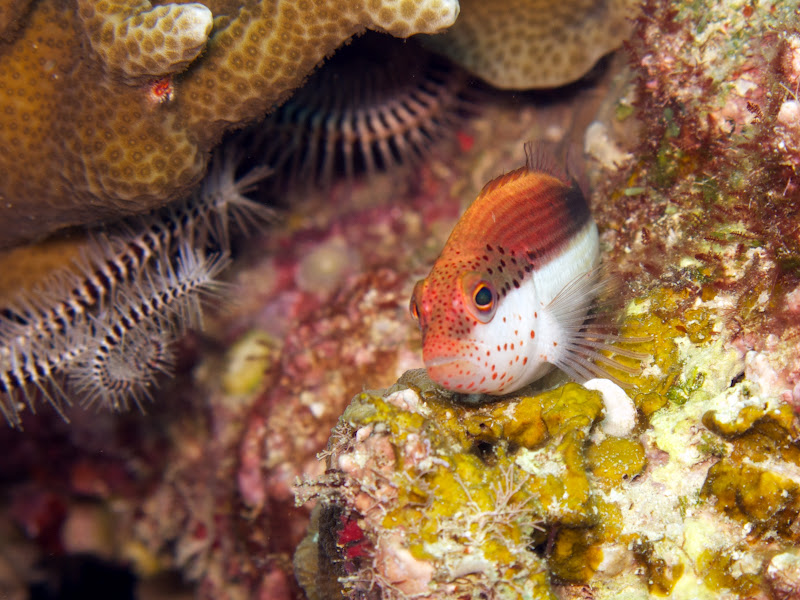 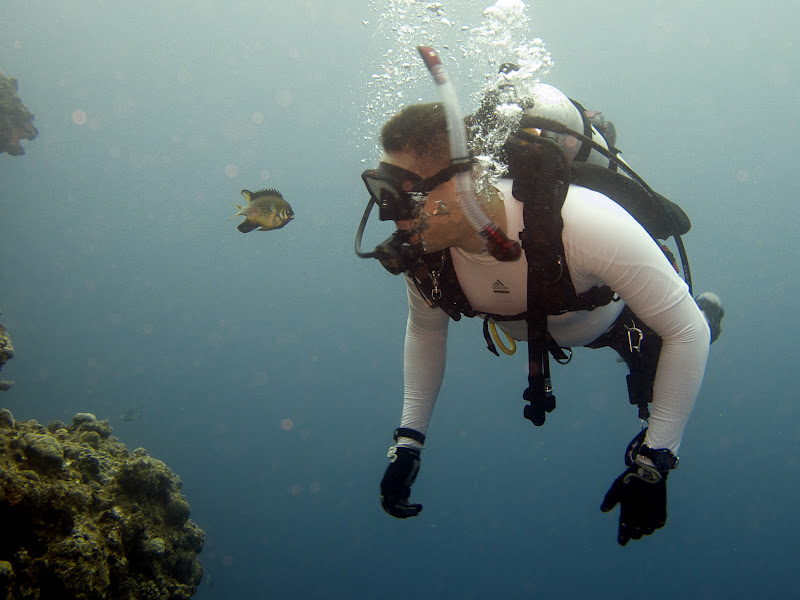 I find the below photo to be particularily interesting.  Like I’ve said in this post and previously written entries, several nudibranch enthusiasts (including myself) believe that the species Chromodoris elisabethina is starting to change its color and in turn, is looking very similar to a Chromodoris colemani.  I originally thought these two nudibranch were about to mate but I received several replies when I posted the photo onto Okinawa Nudibranch Round-Up.  One gentleman wrote back that nudibranchs sometimes eat each other.  I suppose you could label nudibranchs “underwater cannibals/zombies.”  Randy Birt also mentioned that the nudibranchs “sex organs are on the right side just behind the rhinophores. The one on the left would have to turn around to get everything to ‘match up.'” 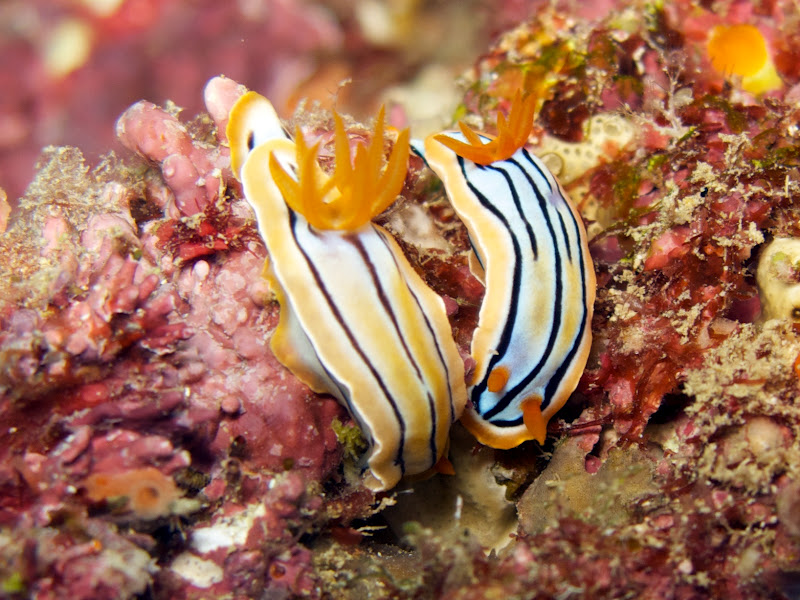 After turning around to begin our swim back to the exit point, I continued focused on the micro-fauna we encountered.  I managed to take a nice photo of a red & white pygymgoby that was resting on top of some rocks.  Soon after I took the photo, it quickly disappeared into a hole. 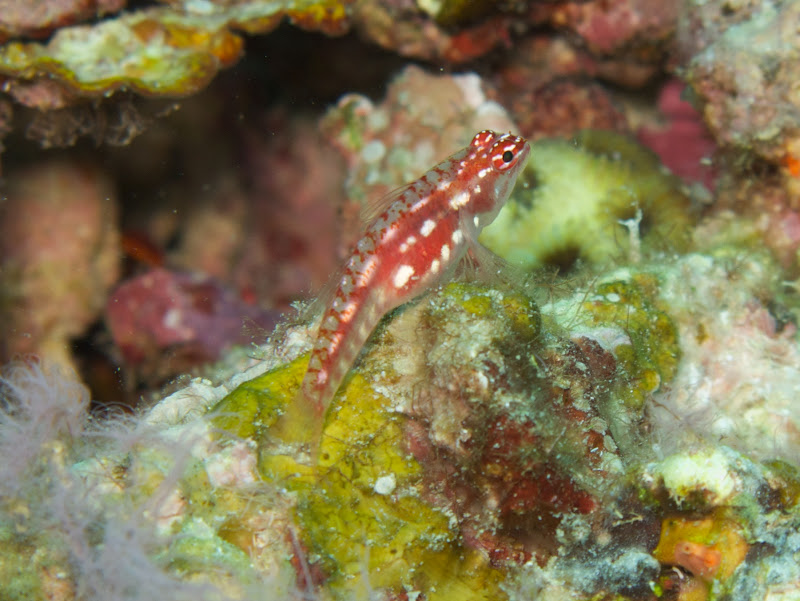 I also spotted a cute blenny with it’s head sticking out of the rocks.  Unfortunately, I am not able to identify the species of this blenny because the rest of it’s body (where much more detail is located) was hidden within the crevice. 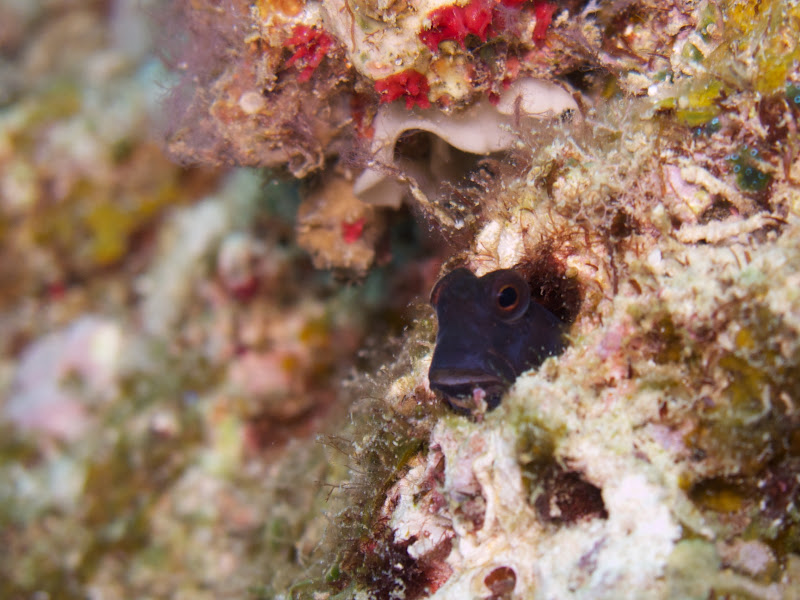 During the last 10 minutes of our dive, I experienced a flurry of nudibranch sightings – 2 of which I had never seen before.  Along one rock wall where there are numerous ledges, I decided to poke around to see if anything cool was clinging to the undersides of the various ledges.  To my delight I saw a faint blue-bodied nudibranch with thin white lines running along it’s body.  It was also rigid looking whith black stripes in the various “sections” outlined in white.  Oh neat!  I positioned myself directly beneath it and then looked up so I could see my LCD screen on the camera.  Each time I exhaled I moved out from under the nudibranch so my bubbled wouldn’t disturb it.  I took about 10 pictures but only a few actually had the nudibranchs head in focus. 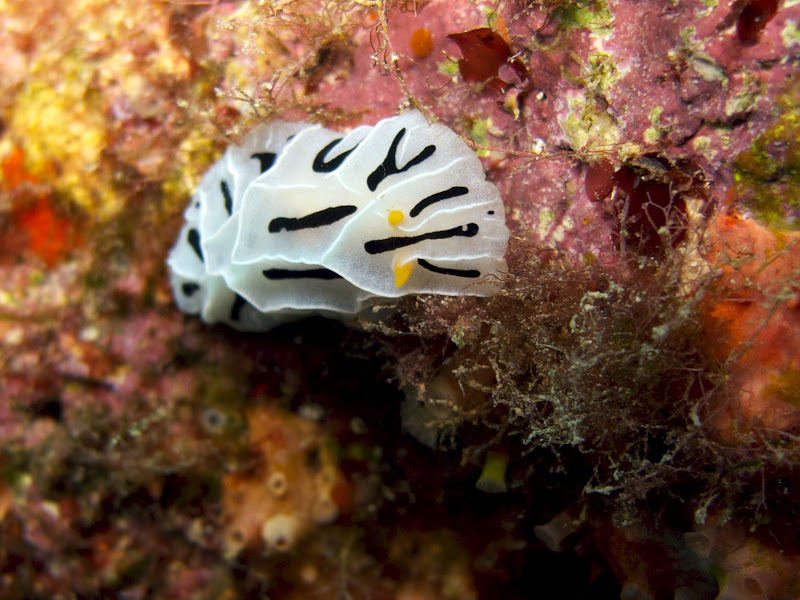 When I returned home I searched on Robert Bolland’s Okinawa Slug Site and the facebook group Okinawa Nudibranch Round-Up to see if I could identify the species.  I didn’t find anything that matched specifically.  The closest species I could find was a Reticulidia fungia.  The difference between the two was the distinct yellow coloring on the Reticulidia fungia that I saw in the pictures online.  I posed the photo into Okinawa Nudibranch Round-Up and asked if anyone knew what I had seen.  Randy Birt got back to me saying that it was probably an atypical Reticulidia fungia.  Variations do happen so I’m thinking he’s correct with his assessment. 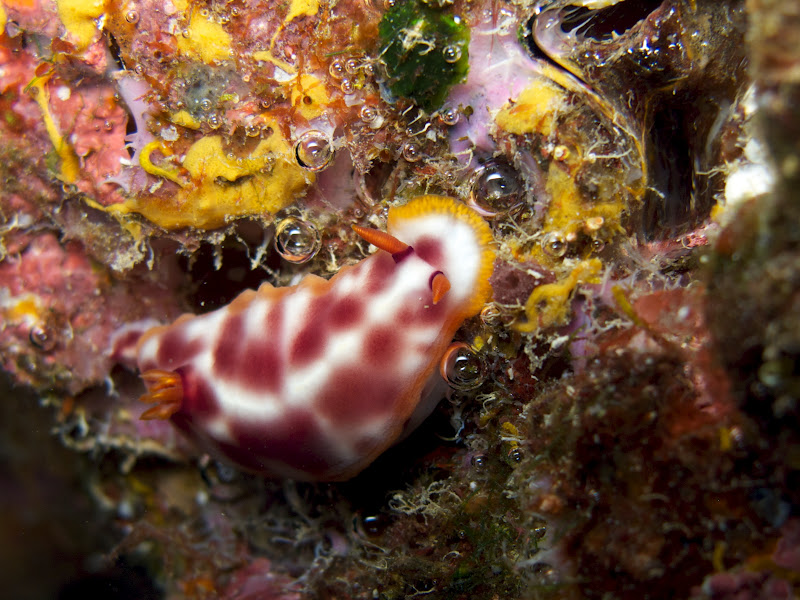 After taking photos to my hearts content of the atypical Reticulidia fungia, I continued looking along the ledges underside and spotted another nudibranch I had never seen before.  AWESOME!  I’m surprised I even saw this nudibranch because it blended is very well with the rocks.  I took a ton of photos of the beautiful deep red, white, and orange colored nudibranch.  By the time I finished up, I’m pretty sure James was thinking, “Will she ever be done?!”  I waved him over to come take a look and then pumped my fists so he knew seeing the nudibranch was a great find.  He took a quick look and then we moved on.  While checking websites online I was able to identify the new nudibranch as a Hypselodoris purpureomaculosa.  Yeah…try saying that 10 times fast.  Apparently it is very rare for Okinawa and Robert Bolland only saw a total of 4 in his many years of research.  I’m so glad I saw one and the pictures I took turned out very well. 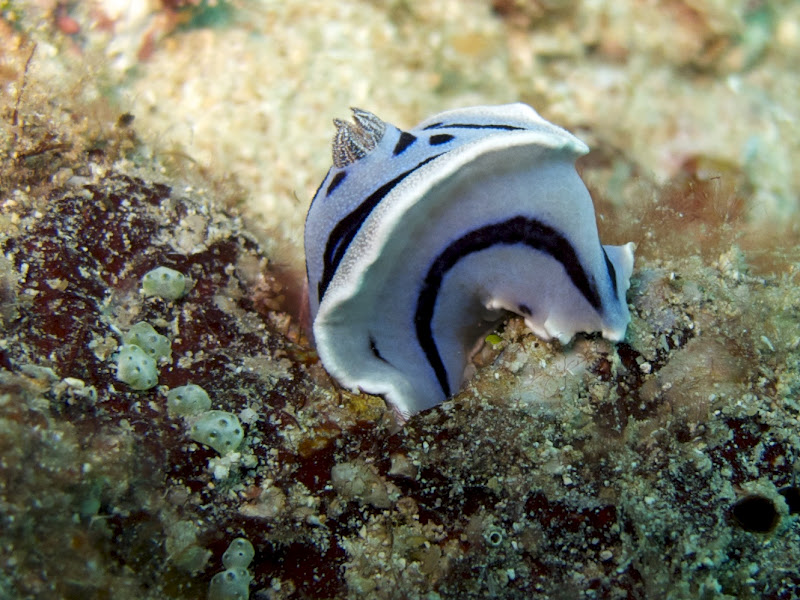 About 5 minutes out from the chain, we kicked over some broken coral and I noticed a Chromodoris willani with it’s head jammed into a hole.  It was rather hilarious to see so I snapped a few pictures and then asked fellow divers to create a caption.  Here are some of the entries I received:

“One and two and bend and stretch and one and…” – Ty

“Does this corral make me look fat?” – Jon

“‎”If I puff out my chest it looks like I go to the Gym.” – Josh (second personal favorite) 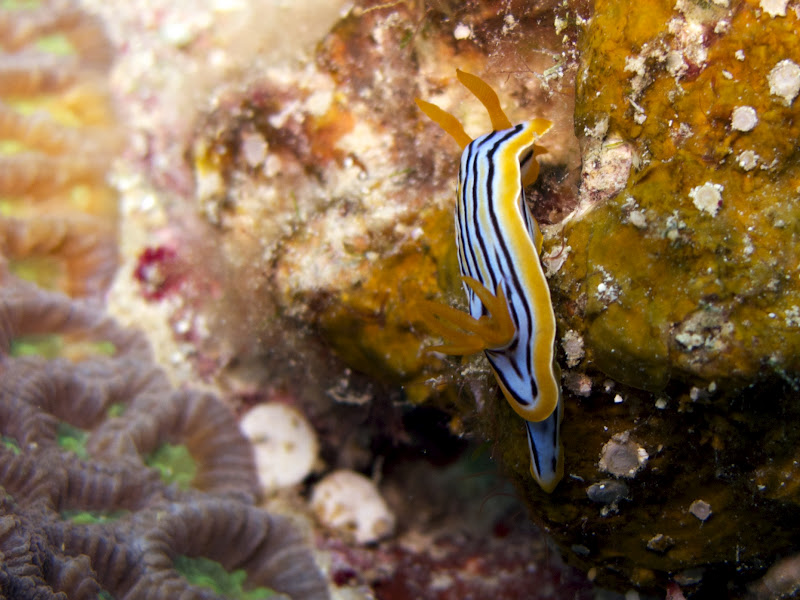 James and I ended the dive with two more nudibranch sightings – a Chromodoris elisabethina (rare for Okinawa) and a Fryeria picta (uncommon for Okinawa).  The below picture of the Fryeria picta nudibranch reminds me of a rhinoceros….the yellow rhinophores and tubercle on its “face” look like horns. 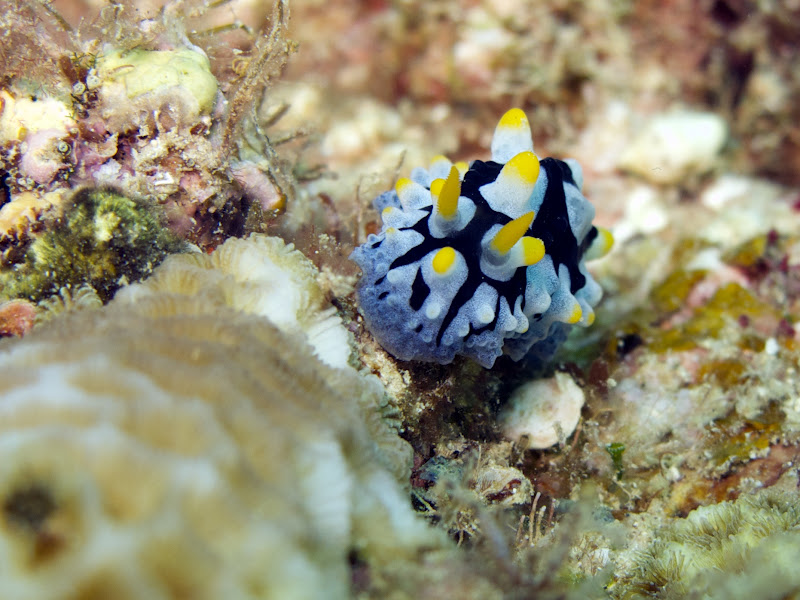 James will be going on a short business trip soon but once he’s back in Okinawa, we plan to do a night dive at Maeda Point.  I’ve heard the wildlife is amazing and I’ve gotten enough bottom time diving it during the day and I’m confident it’ll be easy to navigate at night.  I’ll keep you all posted on what happens…