My toe had been feeling soooooooo much better and the water was really calm so I suggested to James that we go check out some of the more challenging dive sites found on Okinawa.  He agreed and we decided to try Bolo Flats or Bolo Point.  As we drove to the location, I thought the water appeared a bit too rough for Bolo Point, but thought the Flats would prove to be a good alternative.  After looking at the water we decided that the Flats looked doable so we geared up, made the short treck to the water, and started our dive.

Getting in was a bit challenging with my toe but I took my time climbing over the rocks and then flopped into the water on my back…not very graceful but it worked.  Once James made his way in and we had our fins on, I suggested me pop in our regulators and swim along the bottom where the water wasn’t as rough.  Yes we would use some of the air in our tank but I didn’t feel like swimming on the surface and getting thrashed.  In my younger days I would have sucked it up and stayed on the surface but I’ve wised up the past few years (or at least I like to think I have!). 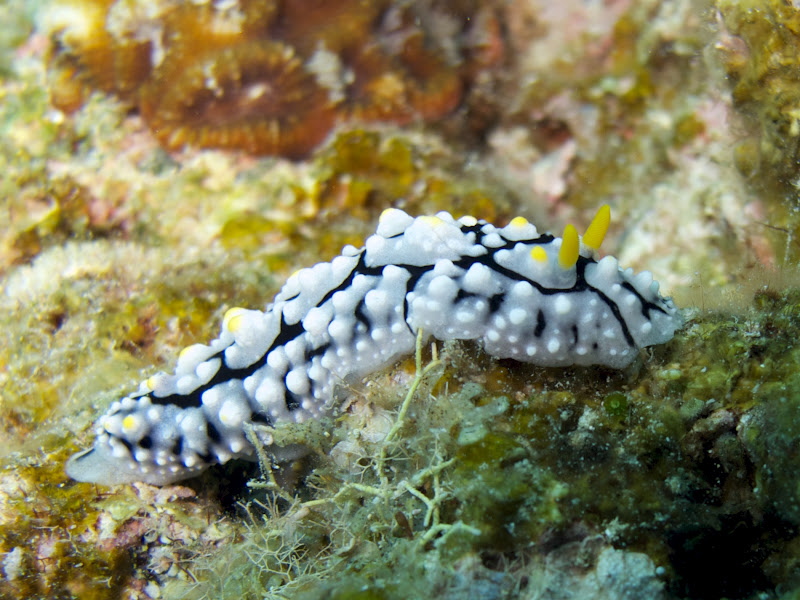 It took us about 4 minutes to kick out to where the reef dropped down.  We descended into a little cove area, made sure we were both set to continue and then swam through a narrow channel into where it it all opened up.  I was a bit surprised at the coral in this area – in some places it was really great and other places it was absolutely destroyed.  Just like Diamond Beach, i think this area might have taken a beating during the typhoons that rolled through here last year.  Even with the diminished amount of coral, there was still lots of fish and James and I both noted their relatively larger size as compared with other local locations. 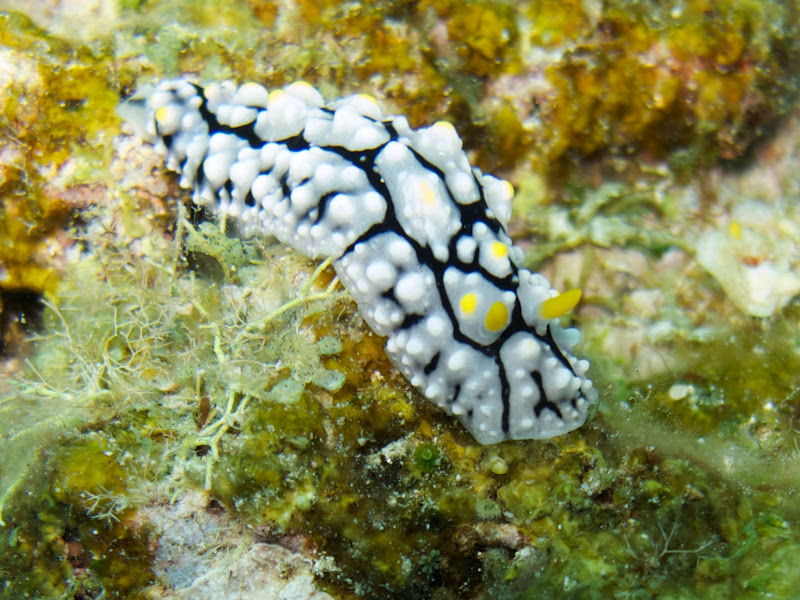 During the first half of our dive, we spotted a few nudibranchs and a cleverly resting tasseled scorpionfish.  The first nudibranch was aPhyllidia elegans.  I was excited to see this because it’s only the second time I’ve spotted type (the other time was along the Sunabe Seawall).  A little bit later I noticed a tasseled scorpionfish resting in some soft, off-white colored corals.  The tasseled scorpionfish did an excellent job, as always, of camouflaging itself.  I would absolutely love to see one of these fish “on the hunt.”  I bet they completely take their prey by surprise! 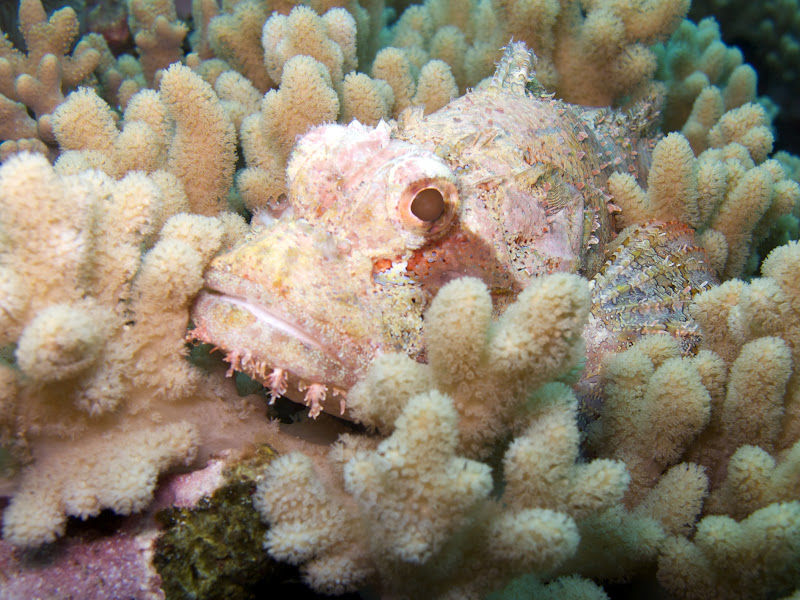 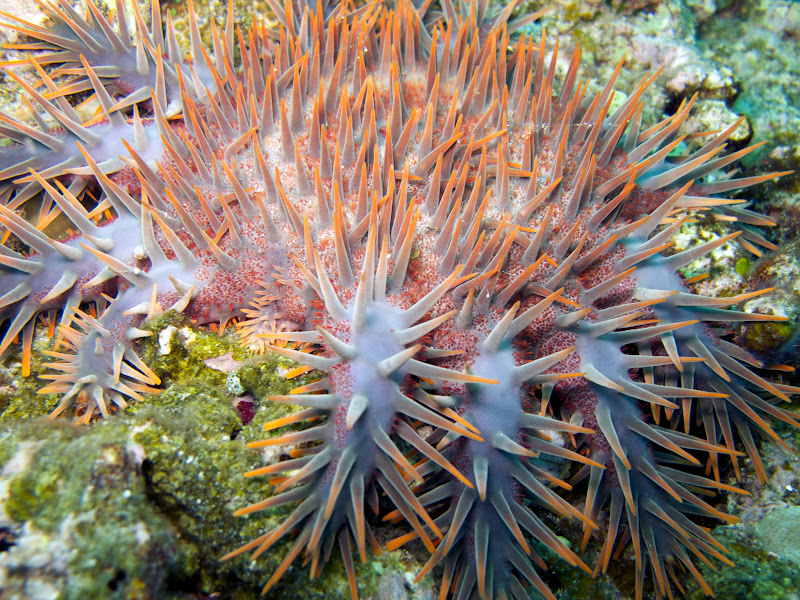 Another type of nudibranchs included a Fryeria picta crawling vertically on some rocks.  I was able to identify this uncommon type of nudibranch due to the single yellow capped notals that are surrounded by black. 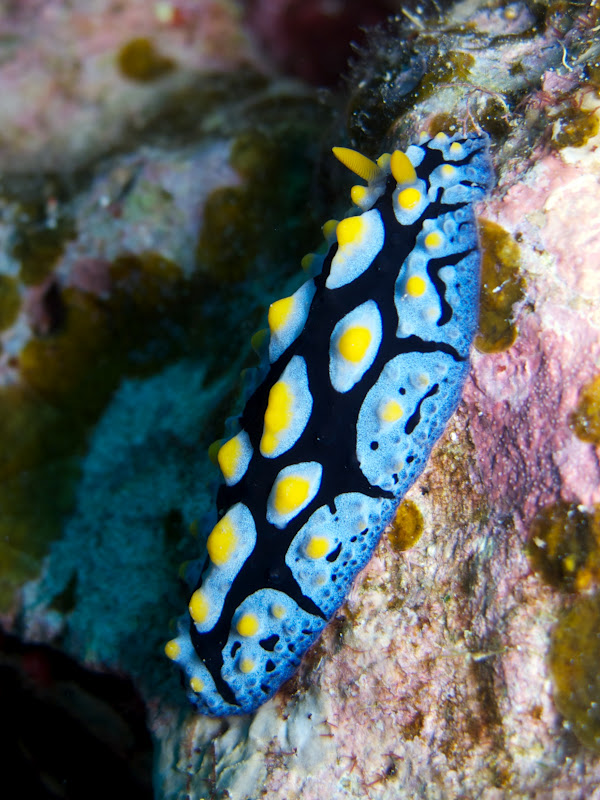 Right before turning around, I snapped a few pictures of a nudibranch that I wasn’t able to immediately identify.  After returning home I searched through Robert F. Bolland’s Okinawa Slug Site and I was fairly sure I had spotted a Phyyllidiella rudmani; however, I like to hear other more experienced nudibranch enthusiasts opinions so I posted the picture of facebook’s Okinawa Nudibranch Round-Up. 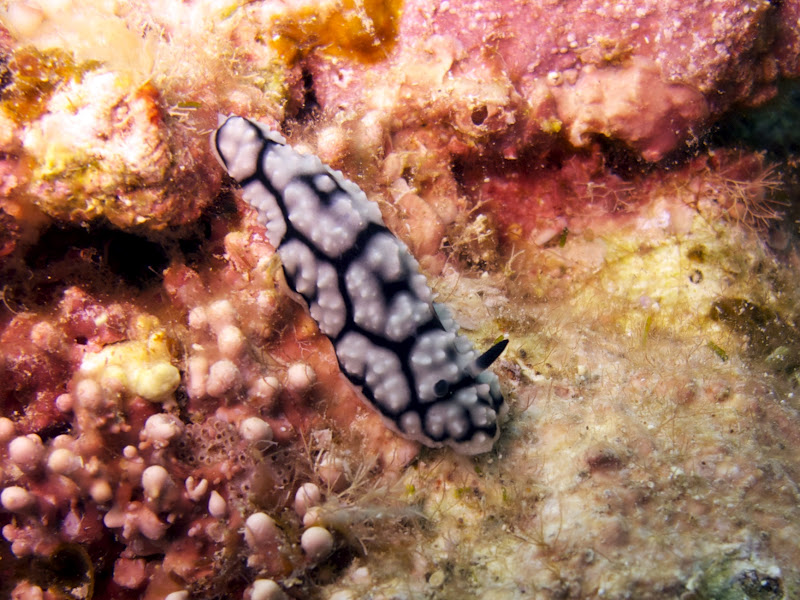 Randy Birt responded by saying, “Kim, I think this one is a tough one. There were several examples seen in the roundup photos. I called it phyllidiella annulata, but phyllidiella cf annulata may be more correct. The cf is a place holder. It means “This is not identified yet, but it is similar to the species following the “cf”. In this case annulata. I think the cross body lines are too much to call this rudmani. I think many of these species are still in flux and difficult to identify. I also think there are still a good many unknowns out there still.  Nice photo by the way.”

After doing a search for “Phyllidiella rudmani” in google I noticed more specific differences than I had on The Okinawa Slug Site….so I knew what I spotted wasn’t what I had originally thought afterall.  I think Randy has made an educated guess here and I agree with him.  The nudibranch I spotted was most likely a Phyllidiella cf annulata. 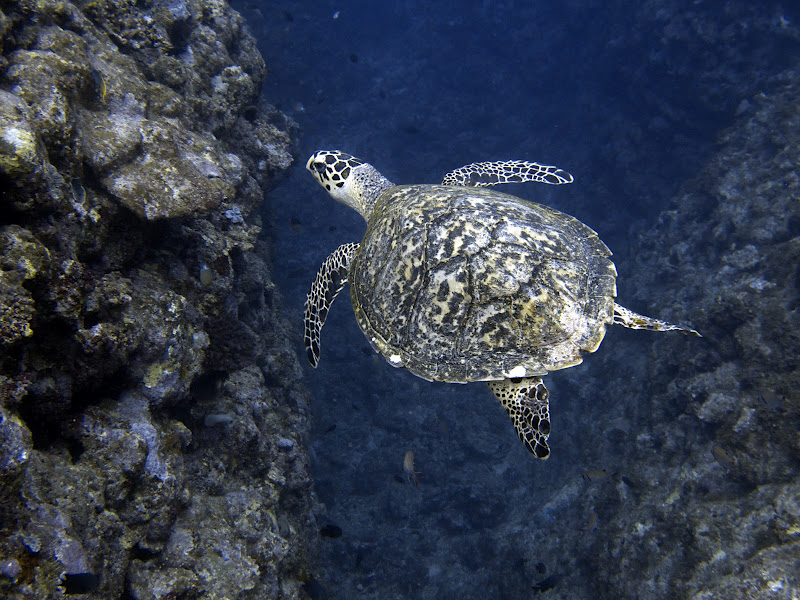 While returning to our exit point, I came up over a finger of coral and spotted a turtle swimming overtop the coral looking like he was trying to find something to eat.  SWEET!  James hadn’t seen a turtle yet so I was excited for te encounter we were about to have.  I waved back to him to come look and he swam up to where I was positioned.  When the turtle spotted us it didn’t dart away but just kept about 15 feet of distance from us.  I managed to get several photos of it as it moved between coral outcroppings. 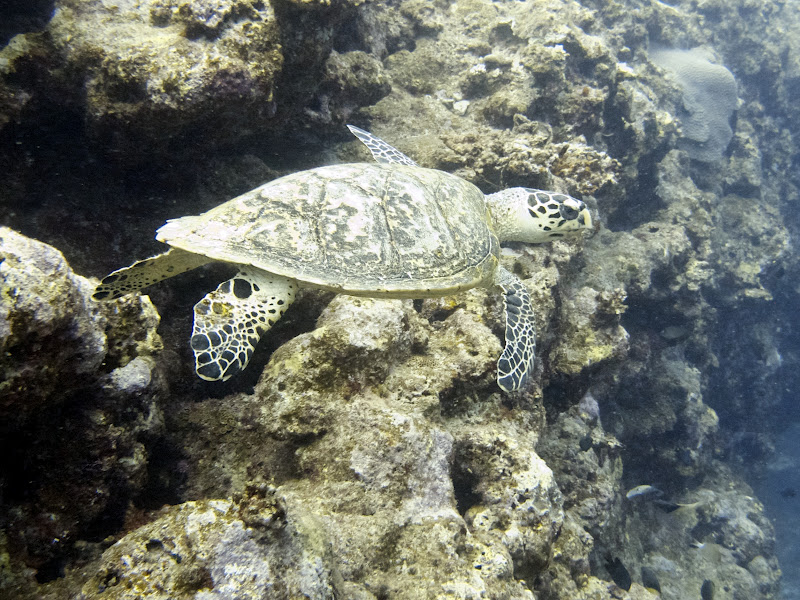 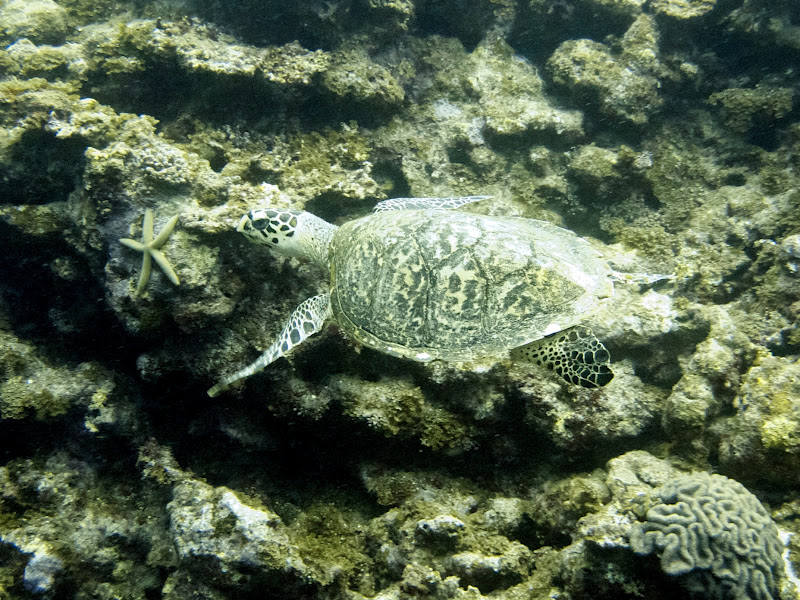 The final picture I took of the turtle really shows how well they blend into the coral.  There have been times in the best when I didn’t noticed a turtle wedged into the coral and rocks until I was about 10 feet away…now that’s pretty cool! 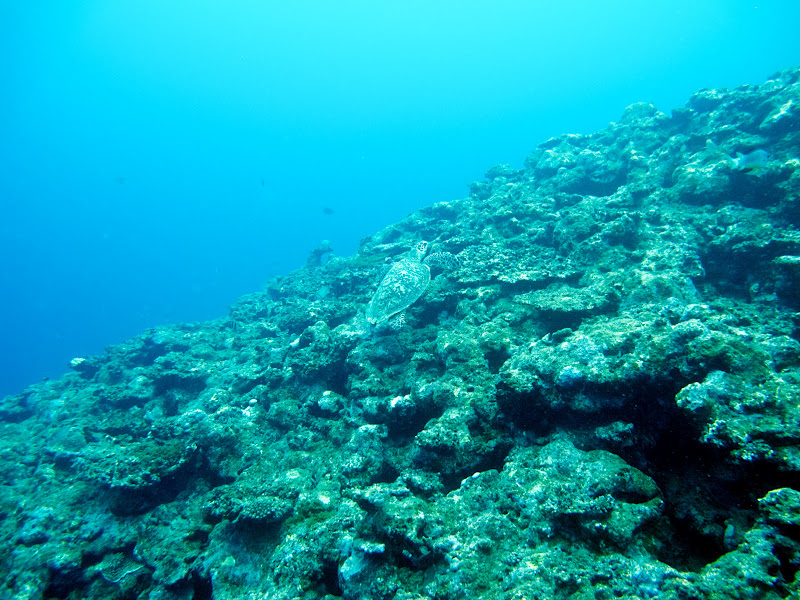 Can You Spot The Hawksbill Sea Turtle?!

After the turtle swam off, we continued our dive by searching for nudibranchs and fish.  I spotted two more extremely common types of nudibranchs, a Phyllidiella pustulosa and a Phyllidia coelestis.  When we made our way back to the surface, the water had become a bit more choppy.  James and I decided to go on scuba and use our compasses to navigate back to the entry.  For about 10 minutes we were kicked at 8 feet until we surfaced.  After climbing out of the water by going over the black rocks, I was smoked…so I took a little rest in a tidal pool of water – it stank like rotten fish but I didn’t care.  hahaha.  James followed me out without any problems, helped me back up, and then we made our way back to the car. 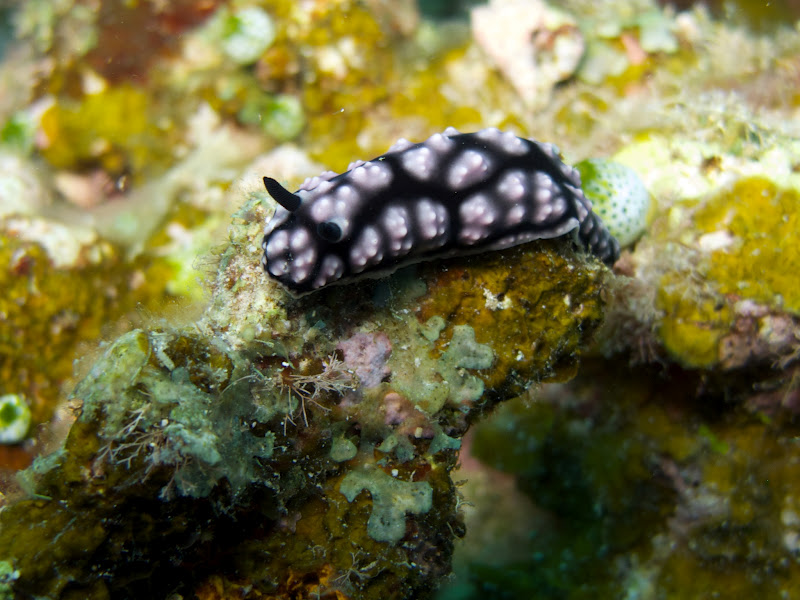 Although we did get to see a turtle, we decided to head up to Maeda Point.  The entry and exit would be a lot easier and it would also be another new site for James to check out on SCUBA! 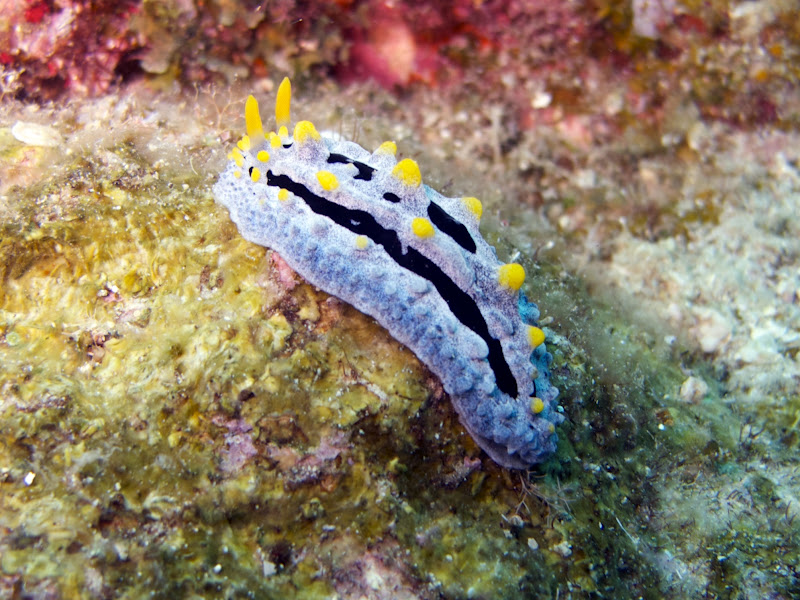