Hanging out with Chrissy always seems to be a tremendous amounts of fun, and when we met up to complete her certification it was no different.  The weather and water played tricks on us, we got completely soaked from the rain, and yet we were laughing the whole time.  When it came to diving, we also had a great time together and saw a total of 3 eel, all different species.

We met at Jam Marine but there were some strong waves coming in.  We probably could have gone out diving here but we decided to try Ark Dive instead.  We wanted to complete Chrissy’s certification but we also wanted to be safe and more importantly have fun!  As soon as we hooped into our cars and started heading southward the rain started falling and the sky turned nearly black.  “Ohh…maybe this just isn’t going to work,” I thought to myself.

After pulling into a parking spot near the gazebo, the weather seemed to turn for the better and the water looked much better than Jam Marine.  We got out and noticed that another storm cloud appeared to be coming our way so we stood under the gazebo and waited for it to pass….but it didn’t.  What we though was a clearing coming towards us ended up to our south…so we waited a bit more…all the while laughing that we had really bungled our prediction.  Finally we saw some clear skies that we were pretty sure would come our way.  Even though it was still raining heavily, we started setting up our equipment.  Our prediction the second time around had been right so as soon as the skies cleared, we made our way into the water. 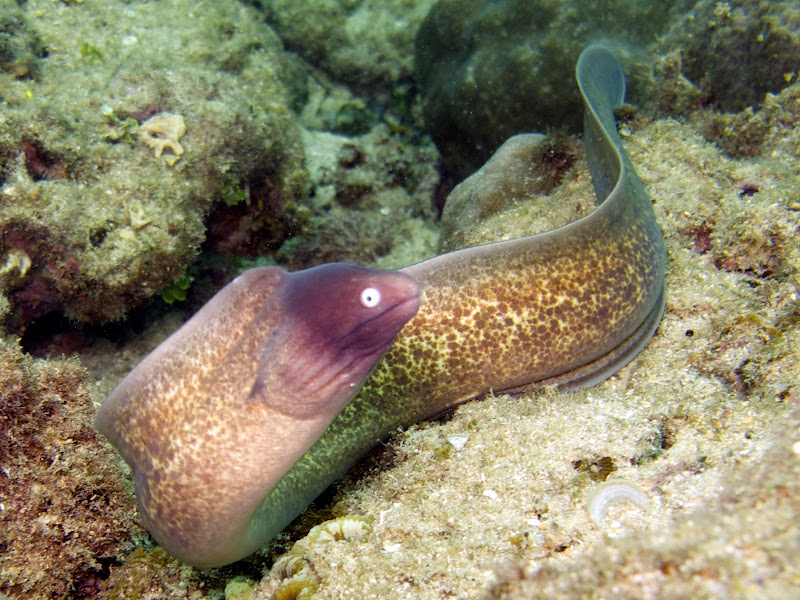 We completed Chrissy’s skills without any issues – she is soooooo calm in the water – and then we started the best part of her certification, underwater exploration.  We headed to the south in hopes of finding the clown anemonefish but it was low tide and my sense of direction got a little screwy so we weren’t able to find them.  However, we did come across two eels.  As I came over a rock outcropping I spotted a white-eyed eel completely over in the open.  I quickly snapped a photo before it disappeared into some plants.  As I looked down I noticed what appeared to be another eel resting under a plant.  I descended to the side of it about 3 or 4 feet away.  I made sure everything was set up on my camera properly and then took a picture.  As soon as the flash went off, the eel swam aggressively toward my camera housing.  I got kind of freaked out so I jerked my camera backward away from the eel and thankfully it swam off.  Chrissy was hovering above me and I motioned to her that my heart was beating really fast after the close encounter.  hahaha 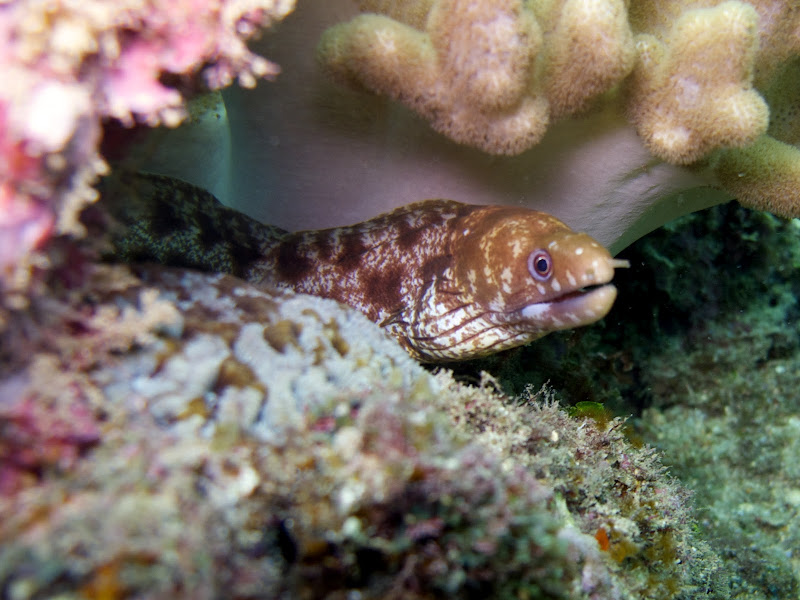 We stayed shallow for pretty much the entire dive because I was having some issues clearing my ears below 35 feet.  This was no problem because there was plenty of wildlife to see.   Chrissy and I both noticed a tasseled scorpionfish laying on top of a plant.  It was a beautiful mix of light purples, pinks, and blues.  Most of the tasseled scorpionfish I’ve seen in Okinawa position themselves on either a rock or the ocean floor and will in turn change their color to match their surroundings; therefore, they are usually dark red or bron in color.  The tasseled scorpionfish that I saw today with Chrissy was a real treat because it was displaying different colors and I was better able to see the details of its body due to the lighter colors. 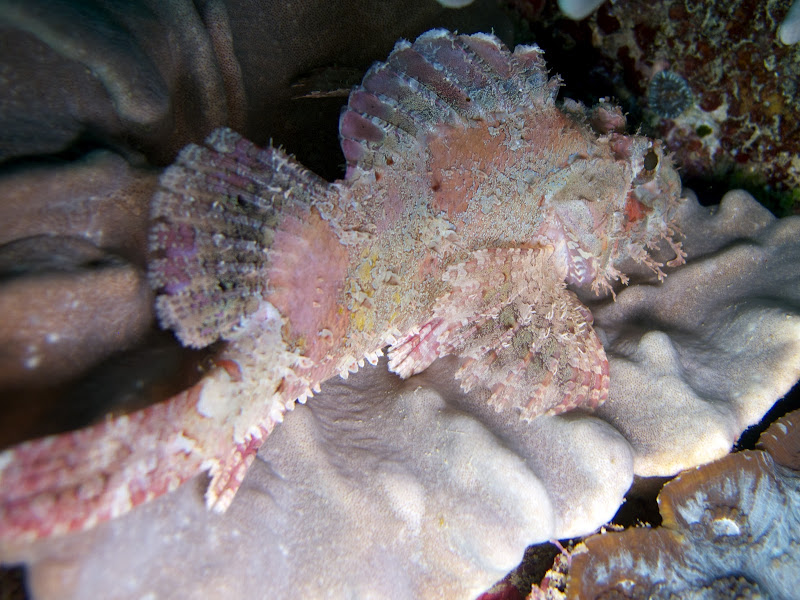 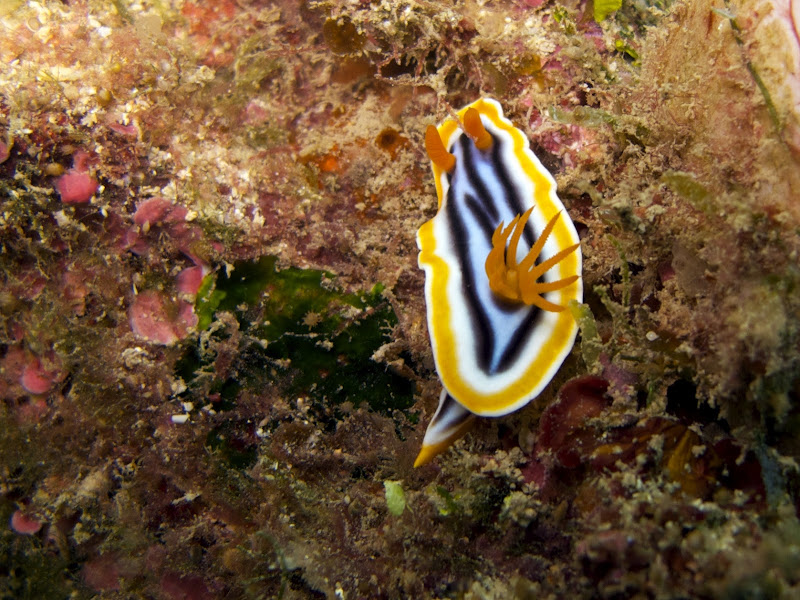 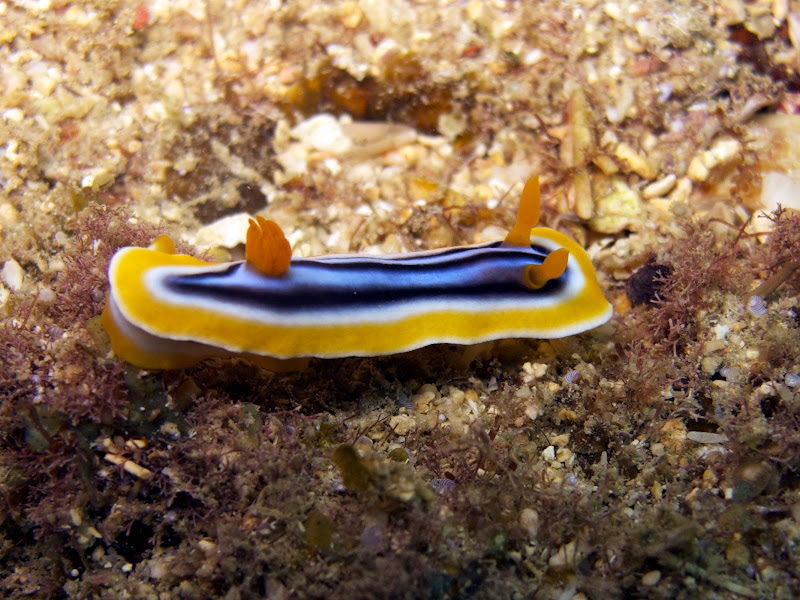 While returning to make our exit, we also noticed a clearfin lionfish hanging out inside a crevice.  We watched it for a bit hoping that it would turn around and face us but we didn’t have any lucky.  It was being a real diva… 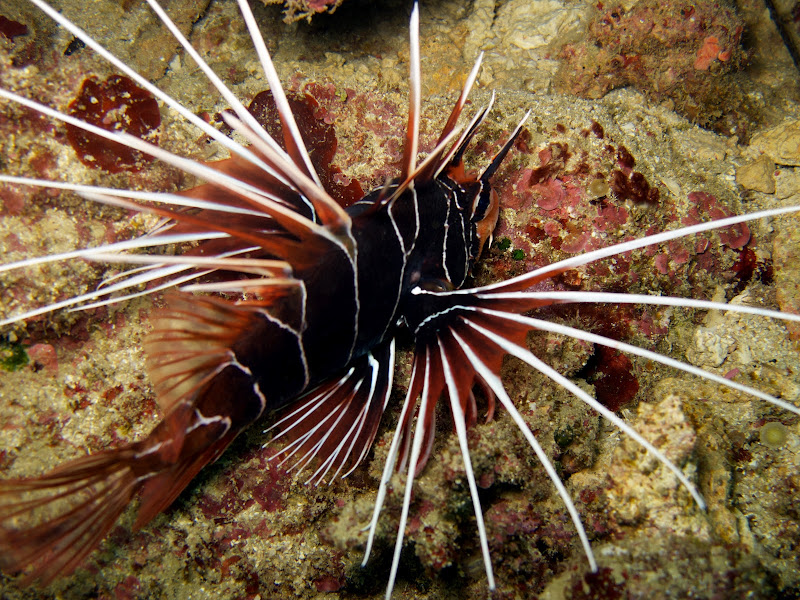 Right before making it to the chain, I noticed a tiny Yaeyama Blenny watching us while sitting on top of some coral.  The distinguishing featue of the Yaeyama Blenny are the two dark lines behind its eyes. 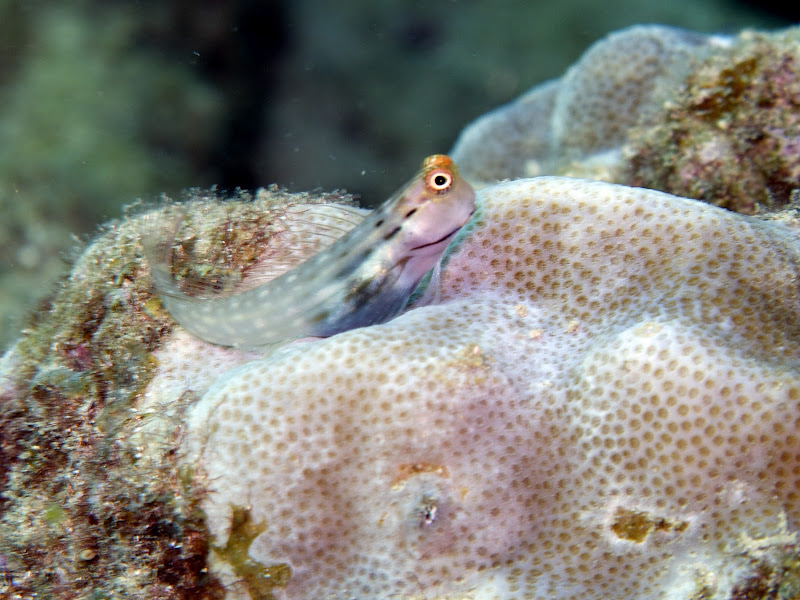 During our surface interval, the water continued to become calmer so we planned to make our way to the north for the second dive.  We were the least bit disappointed with this decision.  While diving with Chrissy I combed the reef wall for nudibranchs and found several to show her.  The nudibranchs included Aegires citrinus, Sagaminopteron ornatum, and Aldisa albatrossae. 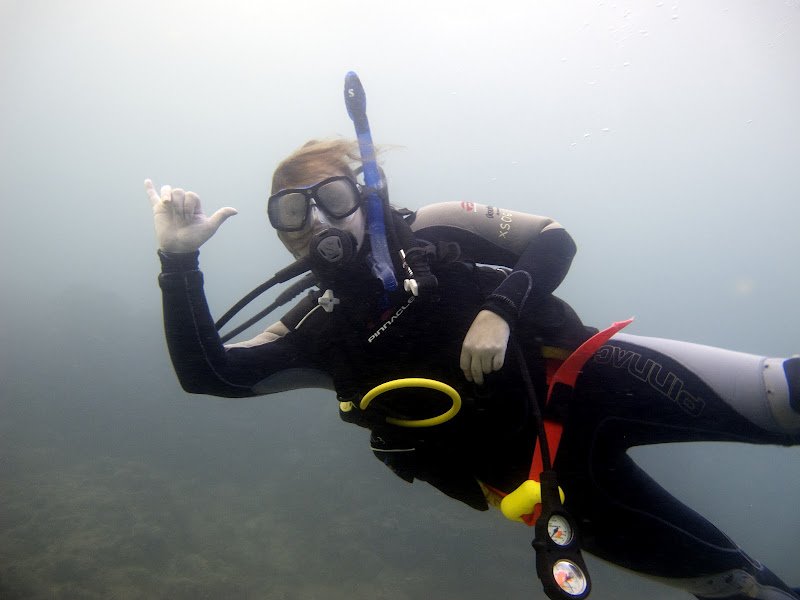 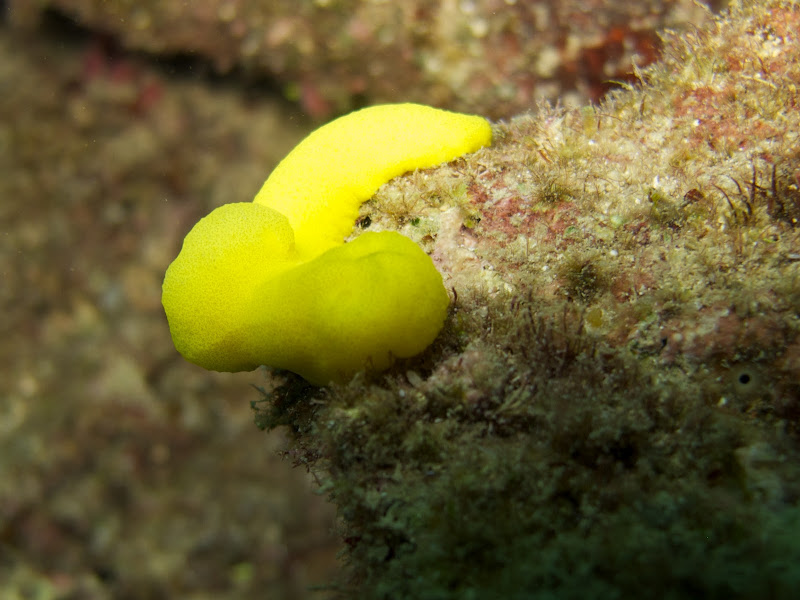 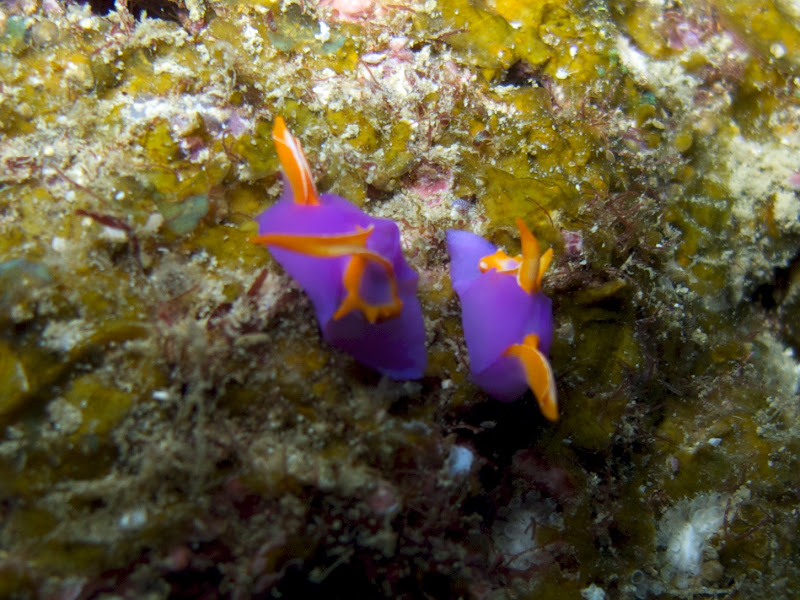 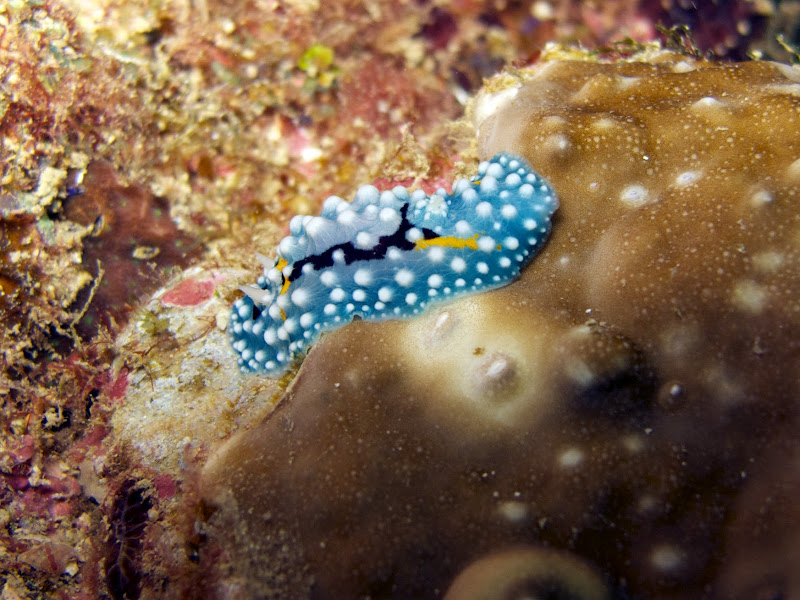 As we neared the point where we would turn around, something really cool happened.  I spotted a Pacific Sailfin Tang and I expected it to either dart into a crevice behind it or swim away from us…but it did neither.  It looked as though it was confused and then all of a sudden it swam directly up and made its escape.  I thought to myself, “Well that was weird…stupid fish.”  I then glanced back to where it was acting all “fishy” (I crack myself up!) and saw a HUGE Giant Moray sticking out.  WOW…maybe that fish wasn’t so stupid after all! 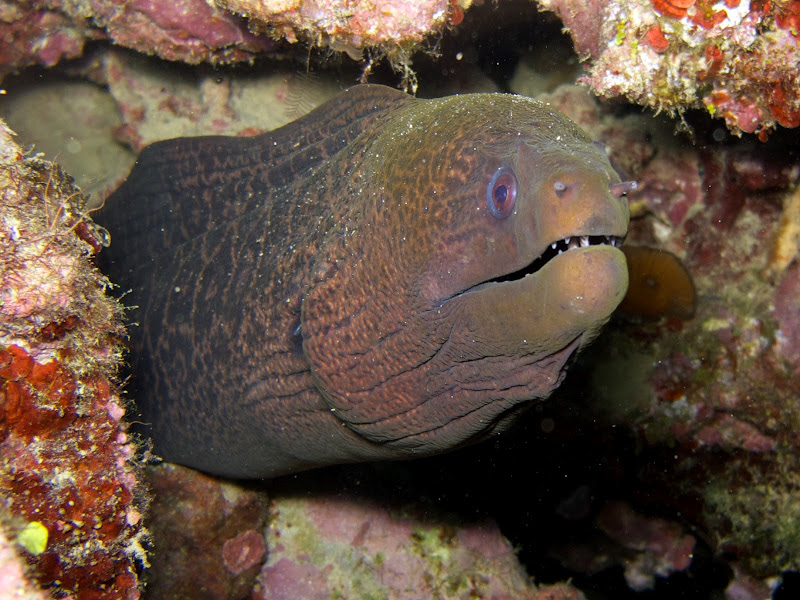 Because of our previous experience with the undulated moray on our first dive, I really didn’t want this Giant Moray Eel to come after my camera.  I kept my distance (about 5 feet…haha) and started to take pictures every few minutes.  He didn’t seem to have any issues with us so that was a bit of a relief.  We must have stared at each other for at least 5 minutes and I got some pretty cool photos.  My fish ID book says that Giant Morays can reach almost 8 feet in length and I would venture to say that the one Chrissy and I spotted was probably around that size.  Although we couldn’t see his full length, about 3.5 feet of his body was sticking out of the hole. 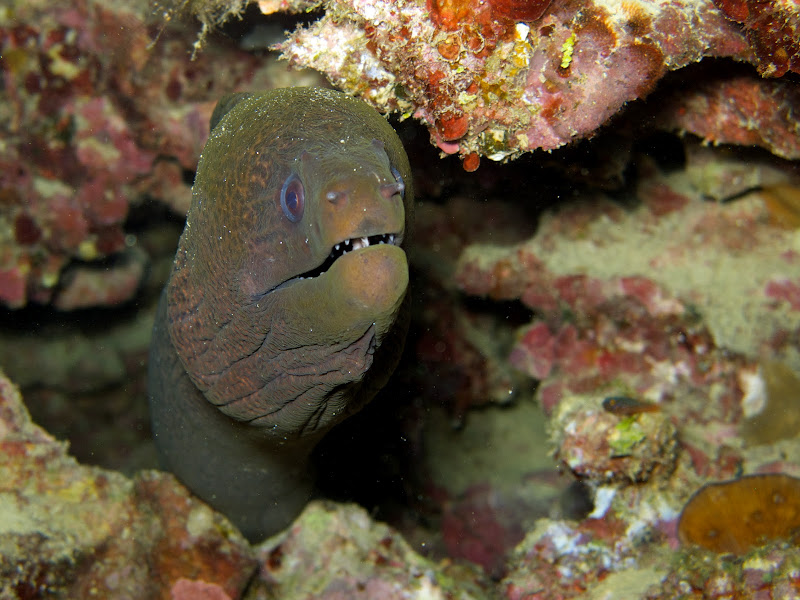 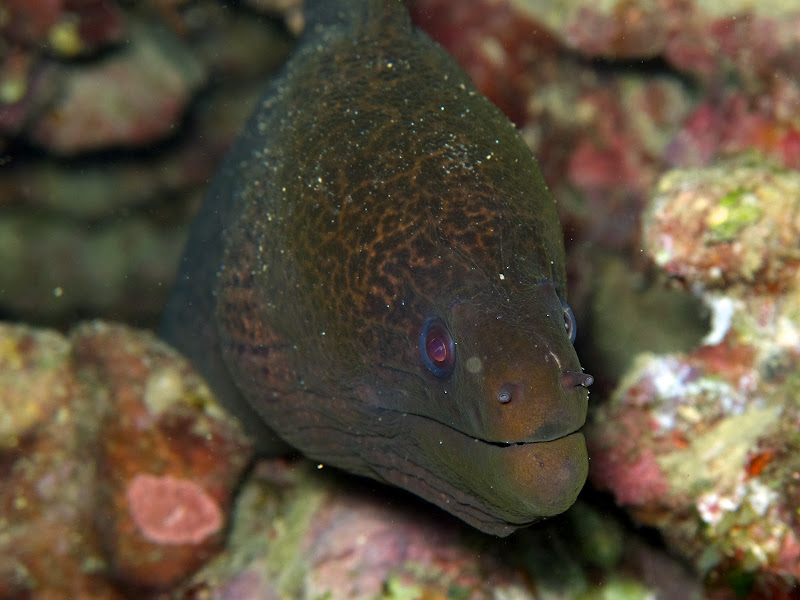 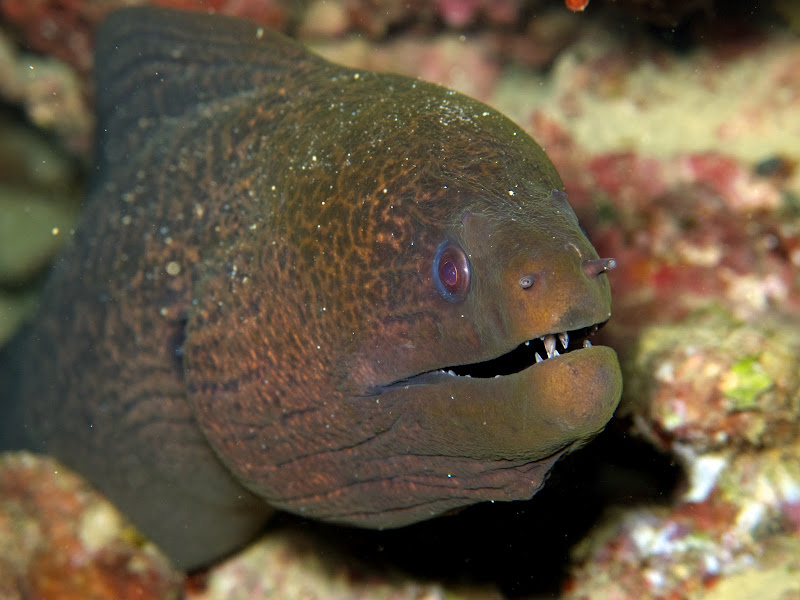 What Big Teeth You Have!

When Chrissy and I got back to shore, we were both excited to see the photos I had taken and we were also glad that we didn’t have any issues with the wildlife coming after us this this time. PHEW!  I would not have wanted to tangle with the Giant Moray in the least bit. 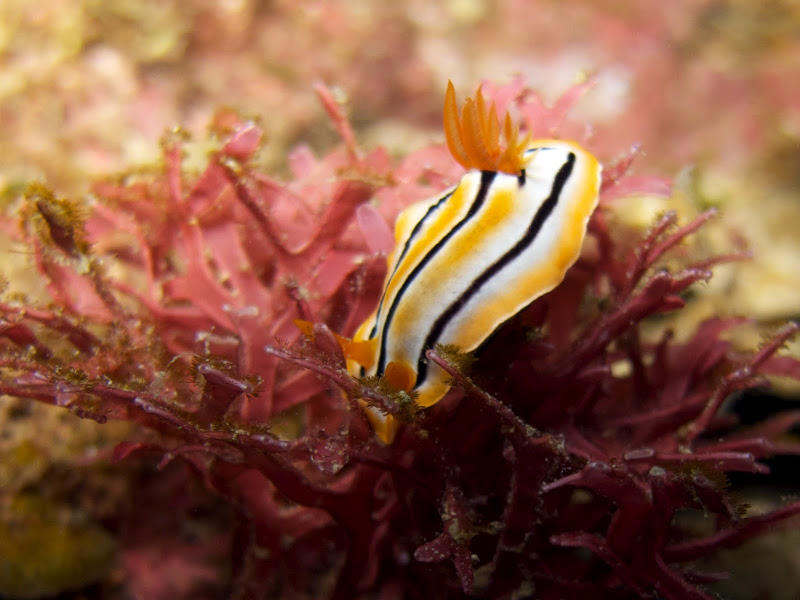 With her certification was completed, Chrissy and I ended up meeting several of our friends for dinner at Ramen Kagetsu Arashi (Ticket Restaurant) on 58.  Eating their garlic fried rice and gyoza was the perfect way to end our day!