I had two amazing dives with Robert and Alex during their Deep Adventure Dive and AWARE-Fish Identification Dive.  We had a funny encounter with a crab, saw numerous flatworms and nudibranchs (possibly interrupting an “intimate moment” between two), encountered several clown anemonefish, and spotted a white-eyed eel hiding in some plants.

Our first dive together was a deep dive at Ark Dive.  In order to get into water deeper than 80 feet, we kicked out to the red buoy.  Thankfully the water was very calm so our swim out wasn’t difficult.  We took a short break and right before we started making our descent Robert said to me, “Kim, you have a crab on the back of your hood!”  What?  I handed him my camera and asked him to take a photo so I could see what the little guy looked like.  Alex, Robert, and I agreed that it must have been hanging out on the red buoy and then jumped on to me while we were resting and chatting. 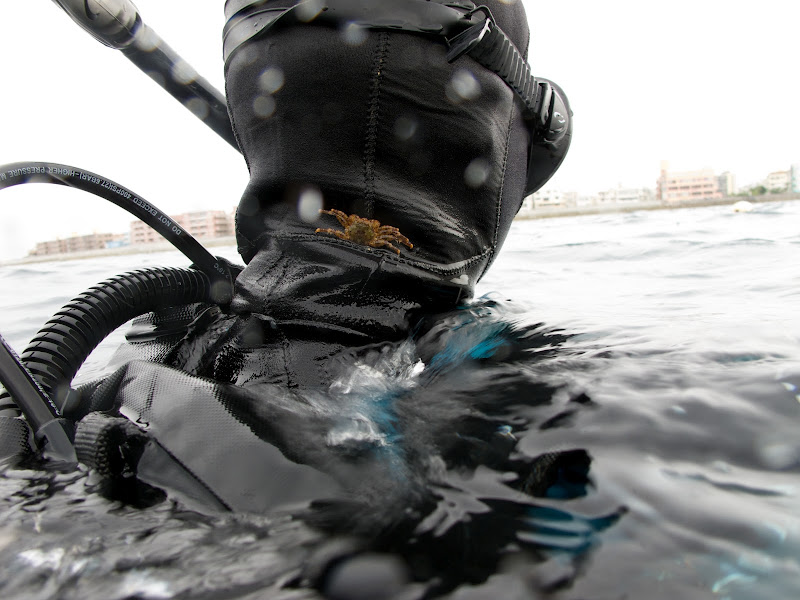 Crab Catching A Free Ride On The Back Of My Hood

I didn’t bother trying to remove the crab before making the descent – I figured he would detach himself eventually and I was correct.  After making our way down the line, we kicked to the west until we hit around 85 feet.  We went through some skills and then started making our way back to shallow water. 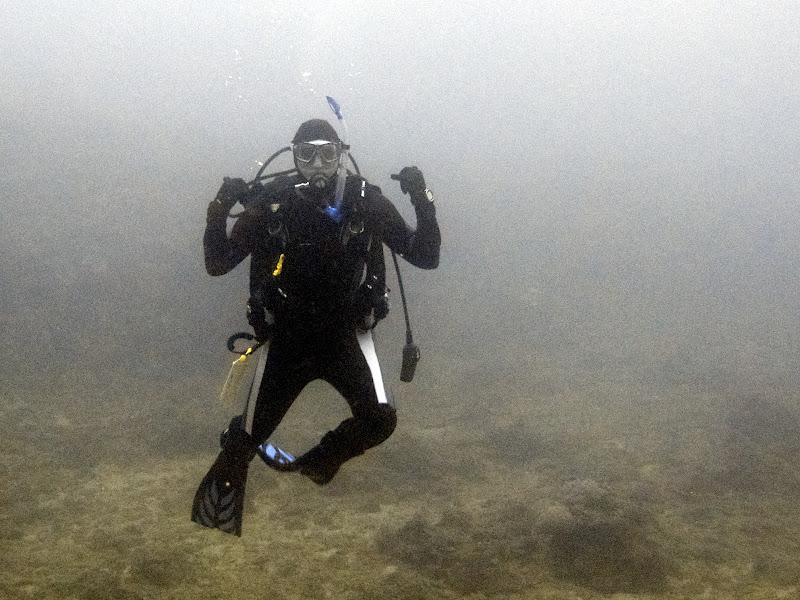 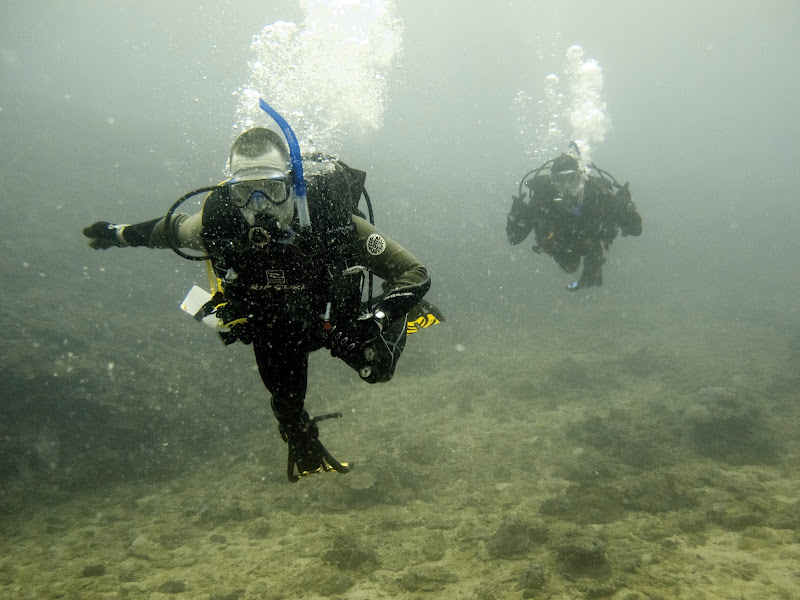 Alex And Robert On Scuba At 80 Feet

As we started to kick back to where we would make our safety stop, I noticed a Pseudoceros fulgor flatworm crawling across a rock.  Because of our depth, it’s colors didn’t stand out very well so Robert and Alex took a quick look and moved on.  I snapped a photo, making sure to have the flash fire off, and was curious to see their expressions about the flatworm’s colors when we got back onto the surface.  Unfortunately, I didn’t take a picture without the flash to provide a good contrast between the two for you to see on this blog post…hoping to remember to do that next time. 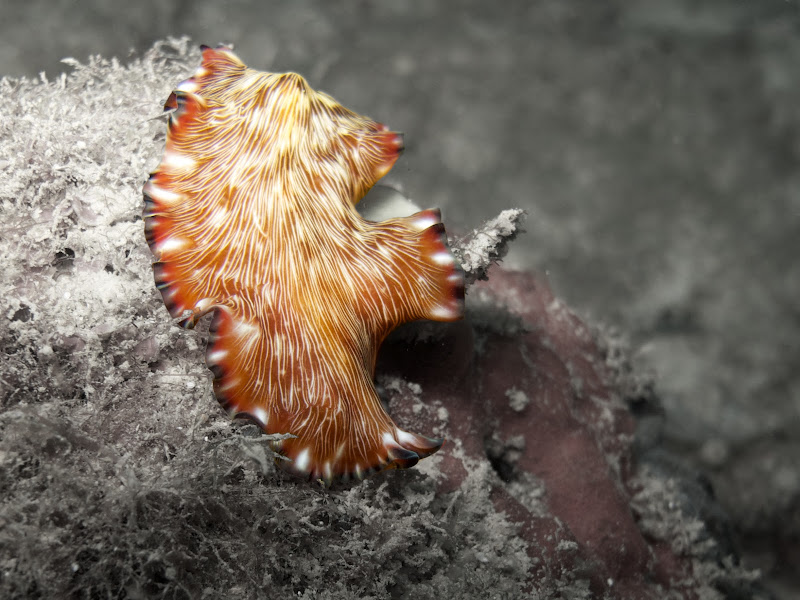 When we returned to the surface, both Alex and Robert were curious to find out what I had been pointing to.  After explaining that it was a flatworm I asked them what they thought about the colors.  Reply: Nothing special.  I then showed them the below photo and they were amazed by the flatworms colors…much different than what their eyes had seen.  I think it really reinforced the skill we had done on the dive where we viewed the color spectrum with and without a flashlight.  This picture was an even better example.  From now I plan to look for objects to photograph at depth to show the students a “real life” example while also using the color spectrum slate I take with me. 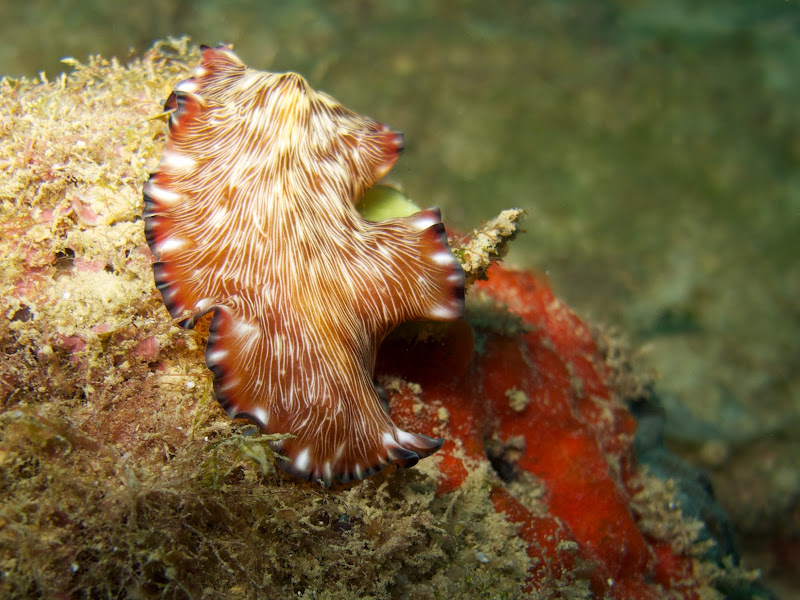 For our second dive, we focused our attention towards fish identification and we kicked southward at Ark Dive.  Diving with Robert and Alex was great because they both calm and collected underwater – we were able to have a lengthy bottom time and see LOTs of wildlife.

The first thing I noticed were two flatworms I’d never previously seen while diving.  I’m currently still in the process of trying to identify them with the help of some facebook scuba groups. 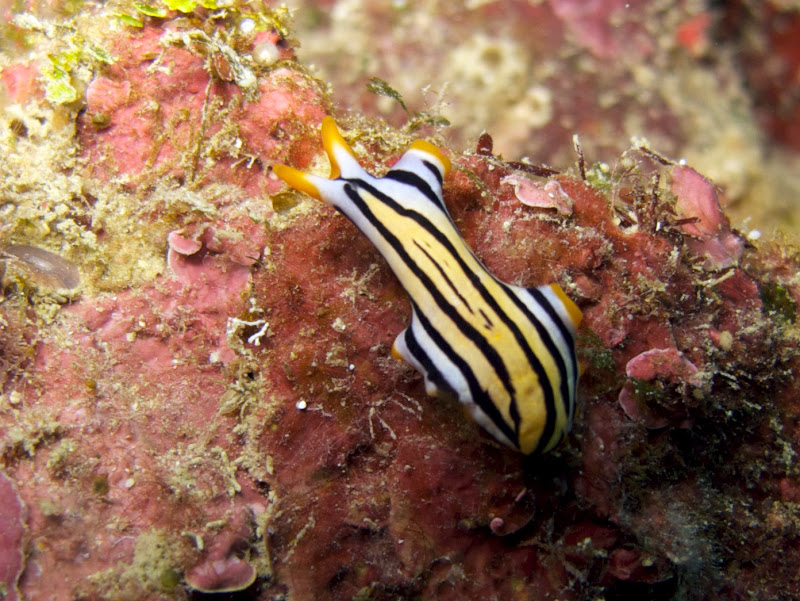 I believe the below picture is that of a Pseudoceros scintillatus flatworm.  This type of flatworm appears to vary in its appearance quite a bit when I viewed photos of it online.  Maybe I’m right…maybe I’m wrong. 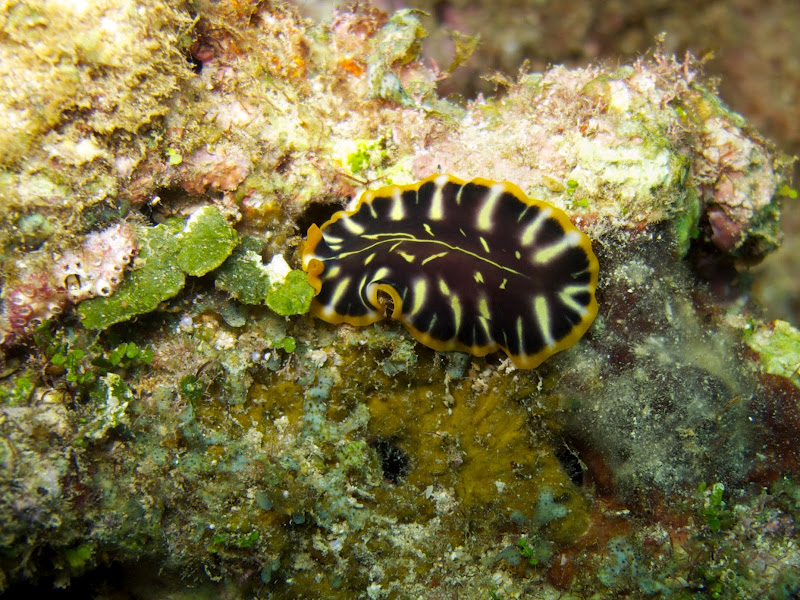 As we kicked over the rocks, coral, and plants I noticed a blenny watching us from a little hole.  When blenny are out in the open, they will usually swim away when we get within 2-3 feet; however, if they are protected by the rocks, they will normally pose and give some great pictures.  Although the body of this blenny isn’t within view, I am pretty sure this fish is a Triplespot Blenny.  I have compared the facial features to other photos I’ve taken and they are extremely similar. 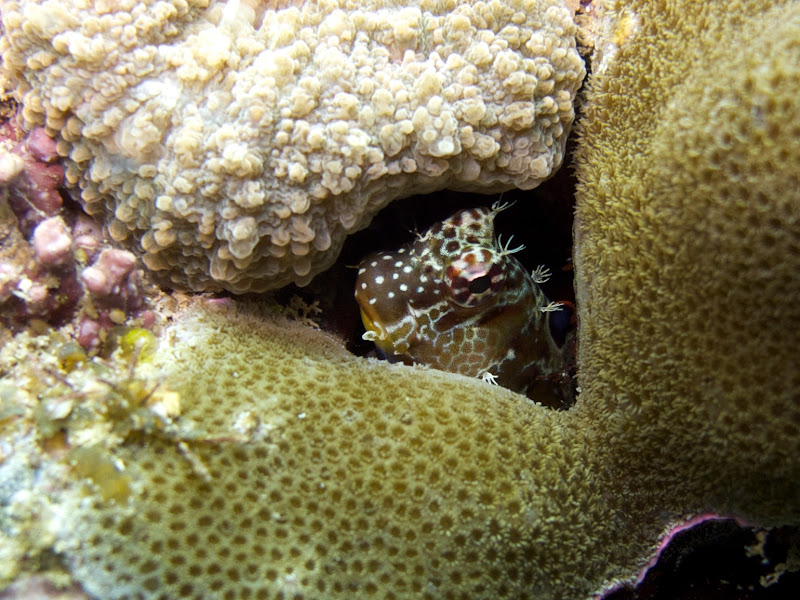 Triplespot Blenny Hiding Behind Some Coral 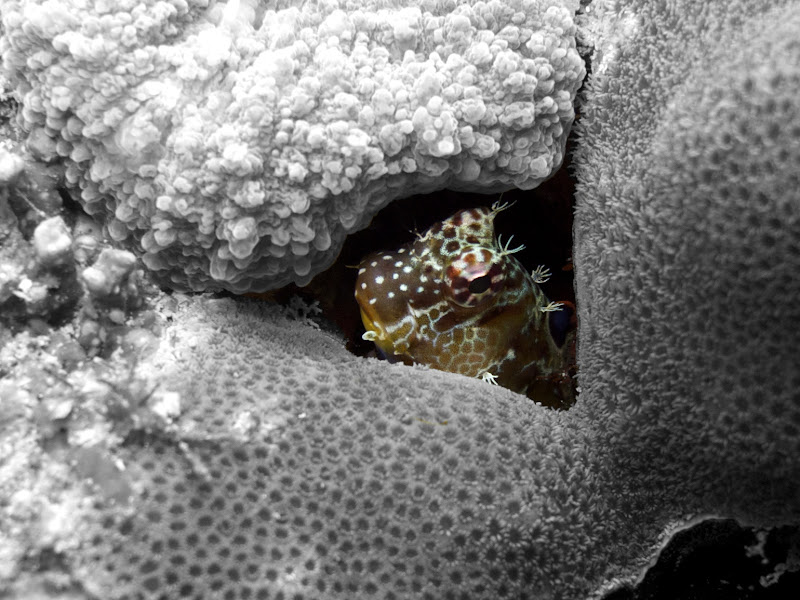 I also spotted a Hyperselodoris bullocki nudibranch making its way across some rocks.  Although this type of nudibranch is supposedly uncommon in Okinawa, I see several on nearly every dive I do.  They are pretty easy to spot because their white bodies really stand out against the darker colors of coral and rock. 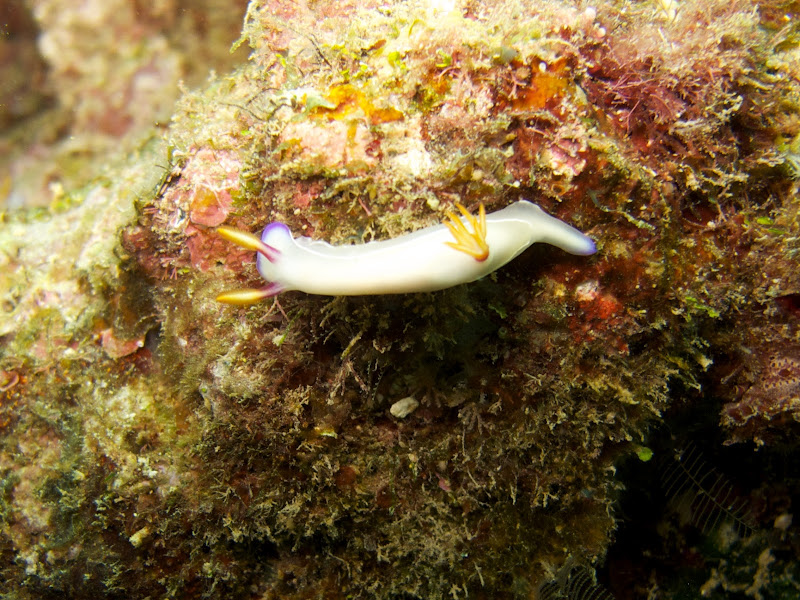 We fanned out as we headed south – everyone wanted to find the small colony of clown anemonefish I had previously seen on a dive.  I still hadn’t gotten its exact location pinpointed so we worked as a team to cover the largest area where I thought it was located.  Thankfully, I after travelling only a very short while I swam directly upon it and called Alex and Robert over.  The clownfish we saw are actually fairly small in size – I always think they’ll be bigger for some reason – perhaps 3.5 to 4 inches in length.  I know the locations of lots of anemonefish around Okinawa but this is one of the few clownfish colonies I’m aware of so I’m excited to see them whenever possible. 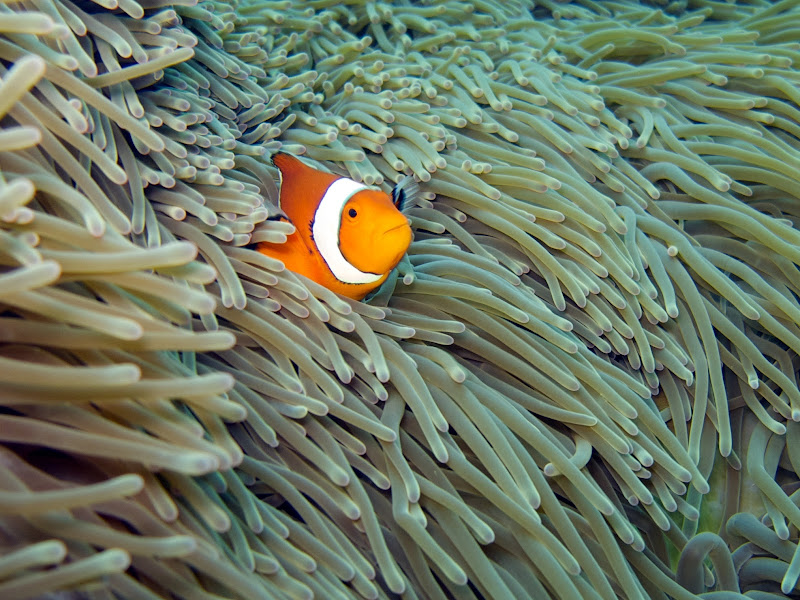 Anemones and clown fish are a great example of a symbiotic relationship.  How do they each benefit from this relationship?  The clown fish cleans the anemone of parasites, provide nutrients to the anemone through its fecal matter, lures unsuspecting prey into the anemone where it will be stung and eaten, and chases off predators which are immune to the anemone’s stings (butterflyfish and turtles).  In turn, the anemone provides a safe home to the clownfish where it is safe from predators.  Rarely will a clownfish veture more than 30 cm (12 inches) away from its host anemone. 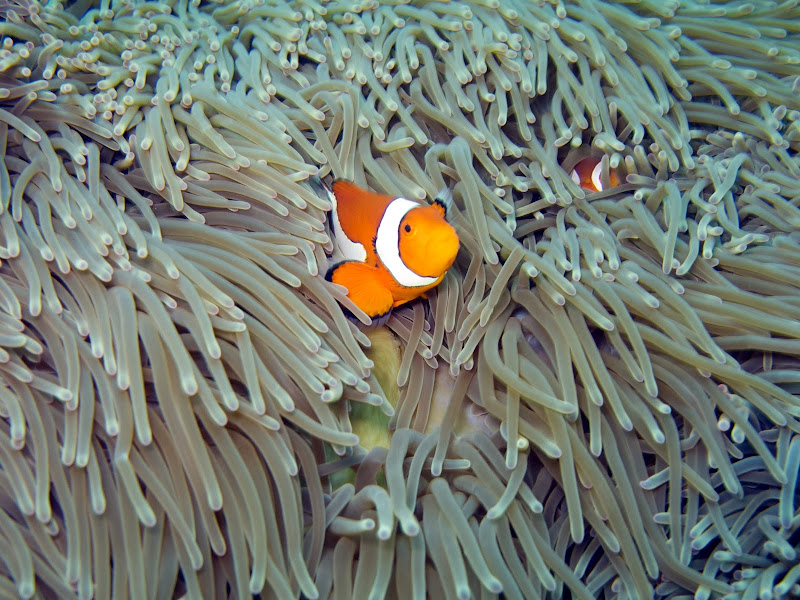 After viewing the cute clownfish for a few minutes, we kicked further southwest to see what other cool things we’d find in the reef.  As I kicked over a ledge, I spotted two Pteraeolidia ianthina nudibranchs  positioned very close together…something I had never seen before.  I snapped a few photos and motioned to Alex that I had found something interesting.  He came over and got a look while I continued snapping away.  I am pretty sure these nudibranch were mating – yep, I interrupted their intimate moment with my obnoxious camera.  HAHA! 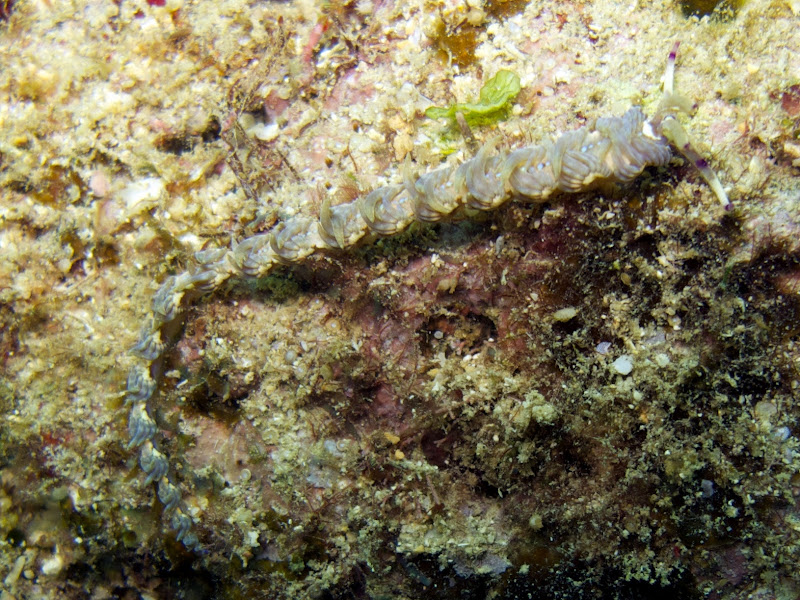 I posted the photo of the two nudibranchs online to see if anyone knew what they were doing and Randy Birt wrote back, “It must be something in the water.”  Isn’t that completely true of Okinawa in general? Seems like everyone is having babies out here!  hahaha 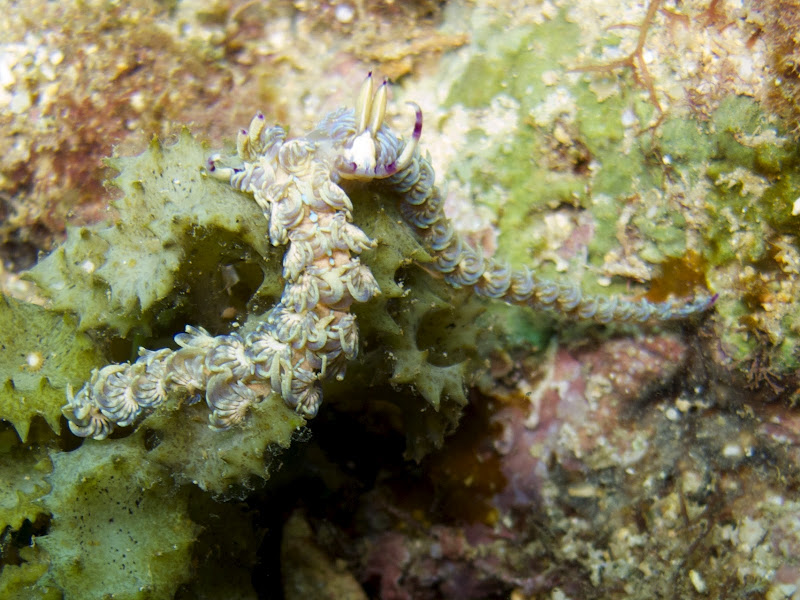 I also saw a very small Hypselodoris maculosa nudibranch on the underside of a rock.  This is probably the second or third time ‘ve seen this species while diving and yet it’s supposed to be common in Okinawa.  Hmmm…. 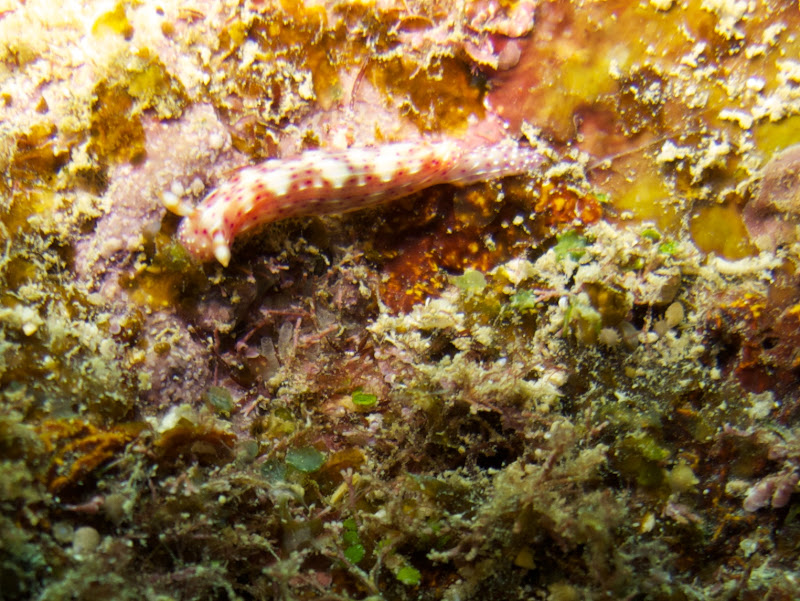 Nearing the point where we’d have to turn around and head back, I noticed what appeared to be the body of a white-eyed eel interwined in some plants.  I half expected to see the eels head pop out and lunge at me so I carefully swam around until I found a spot where I could look underneath the plant.  It was there that I saw the eel looking back at me.  I motioned to Alex and Robert to take a look at it’s body and then  to take up the position I was in to see the head.  They both thought it was pretty cool and I managed to get a neat photo. 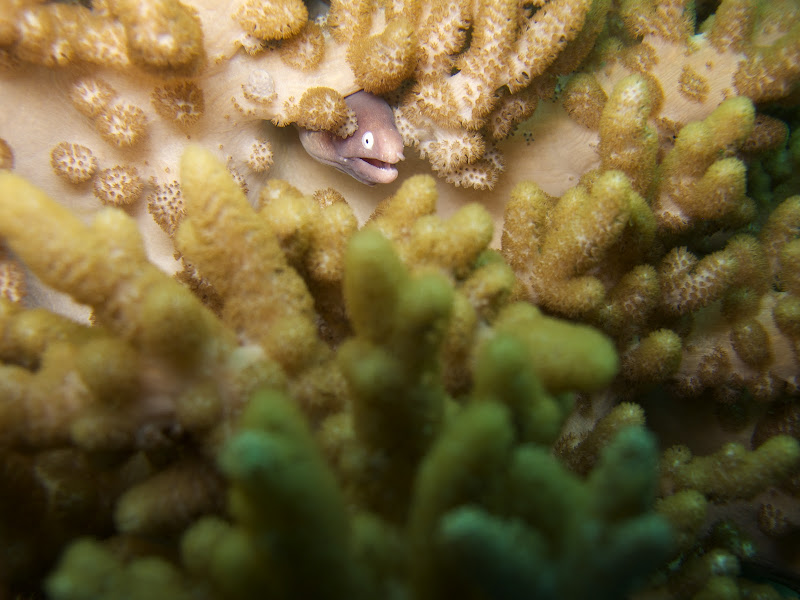 The journey back to our exit point provided us with one more goody – a small zebra lionfish.  It was resting under a coral plants and I had to carefully insert my camera into the opening to get a photo so as not to damage the coral.  It’s unfortunate it wasn’t facing the camera but that’s the way it goes when photographing wildlife sometimes. 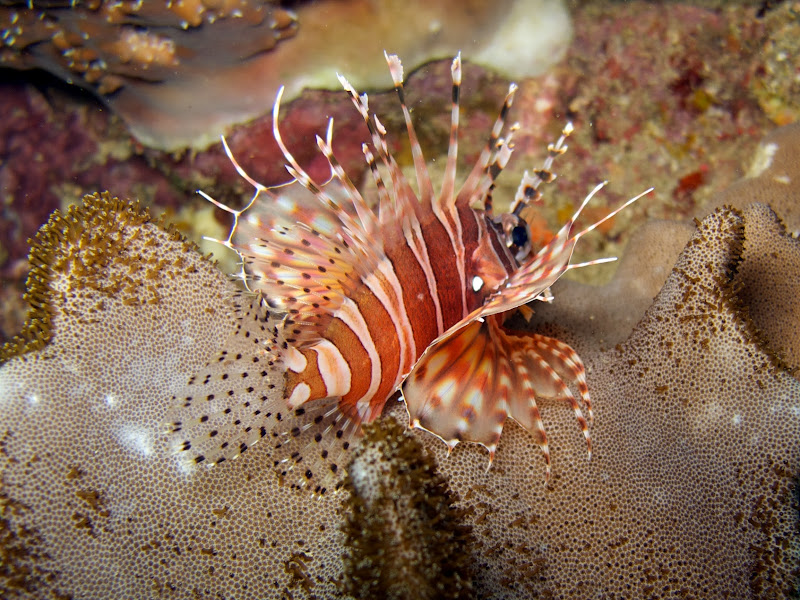 After making our safety stop and begining our surface swim to where we would make our exit, Robert spotted a nudibranch species I had never seen before.  We both got really excited and I snapped at least 15 photos.  Unfortunately, the current and ever so small waves made it really difficult for my camera to get clear pictures.  It started to get swept away by the current so we gingerly picked it up and took some more picture.  They didn’t come out any better but it gave us a good idea for showing the relative size of a nudibranch compared with the human hand – very small.  Props to Robert for being able to spot the tiny guy! 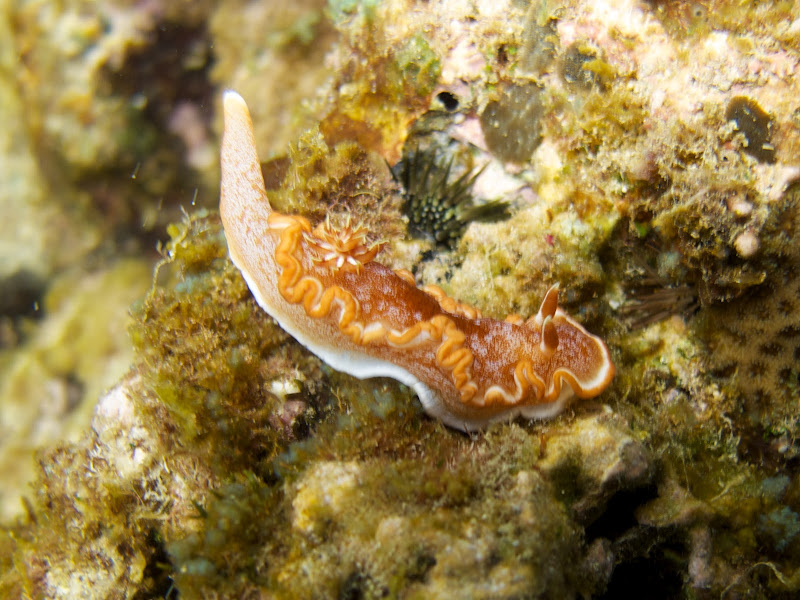 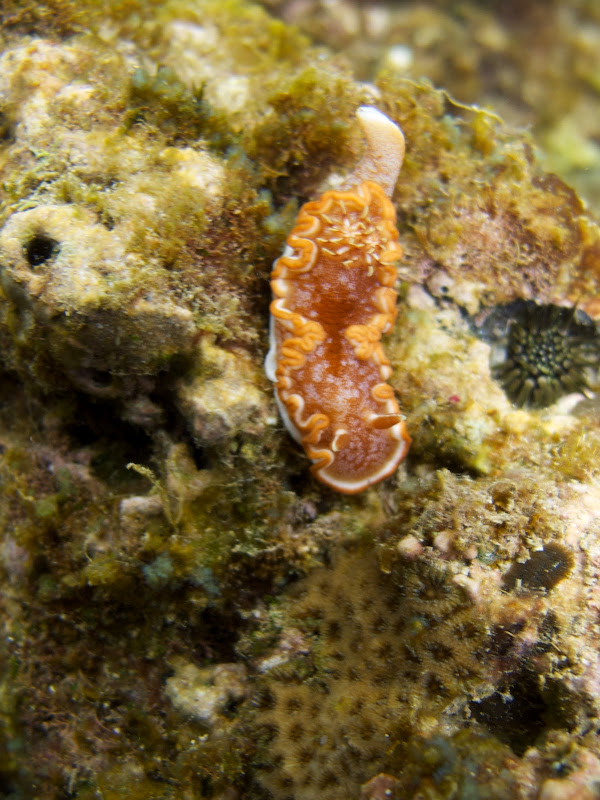 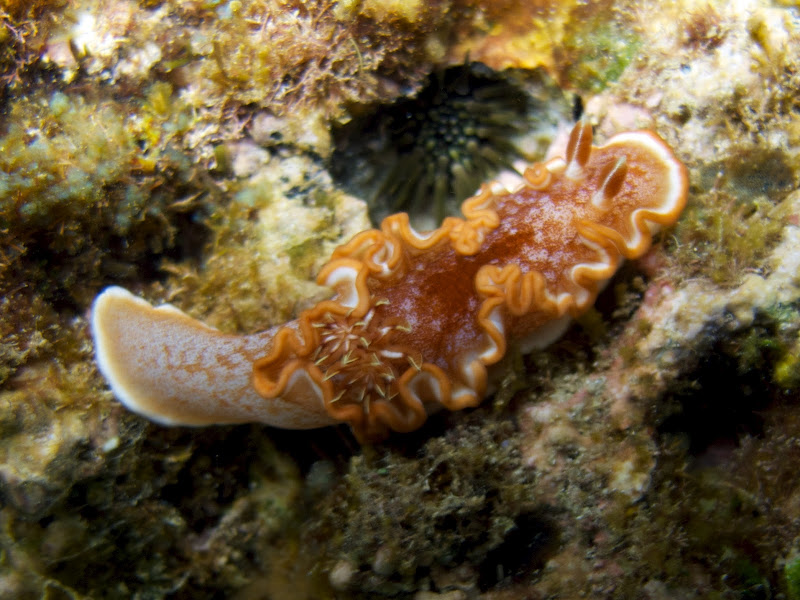 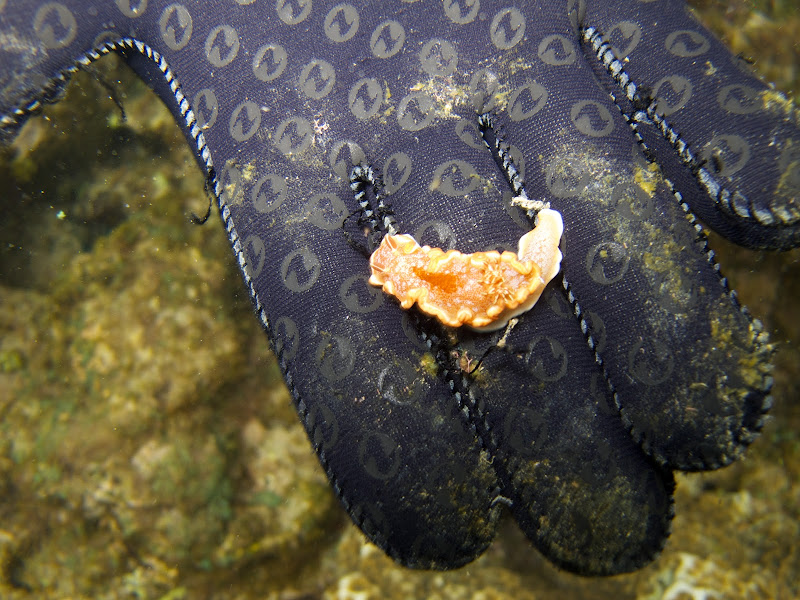 After completing there second dive of the day, I congratulated Alex and Robert on earning their Advanced Open Water Diver certification.  Both spoke of how they plan to continue their diving education and their interest in underwater photography!  Awesome!  I really enjoyed diving with them and hope to see them underwater again in the near future. 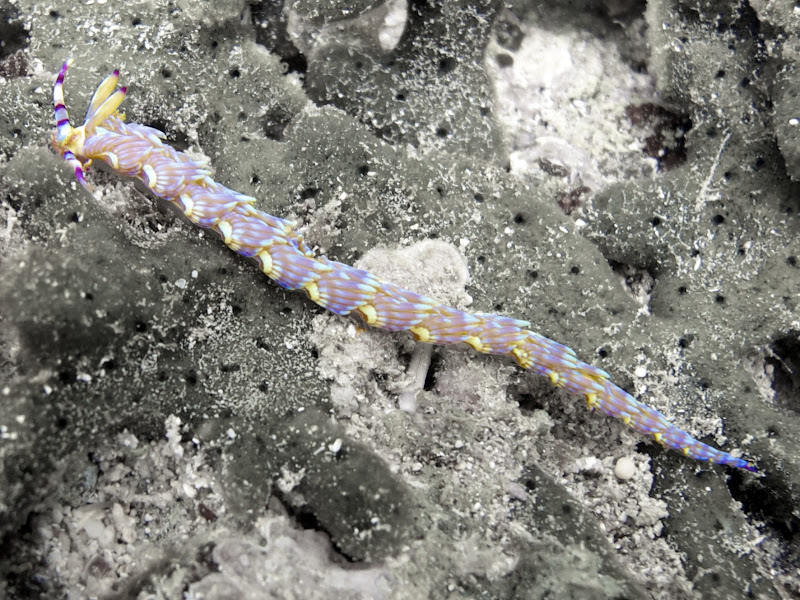