The sun wasn’t out… but the water was really calm and the visibility was great.  On Saturday morning I met up with Jason, Christopher, Russell, and Salomon to complete Open Water Dives 1&2.  We spotted a ton of nudibranchs, a large white-spotted pufferfish, and a white tasseled scorpionfish.

We met up early in the morning, 0730 to be precise, at Ark Dive.  Even though the sun wasn’t out, the water was really calm and we were hopefully that the visibility would in turn be clear.  Our first dive was very enjoyable because it was basically an opportunity for everyone to get a handle on using their equipment in the ocean for the first time.  Jason lead everyone to the north and we actually got pretty far along the reef – probably more so than any other class I’ve taught. 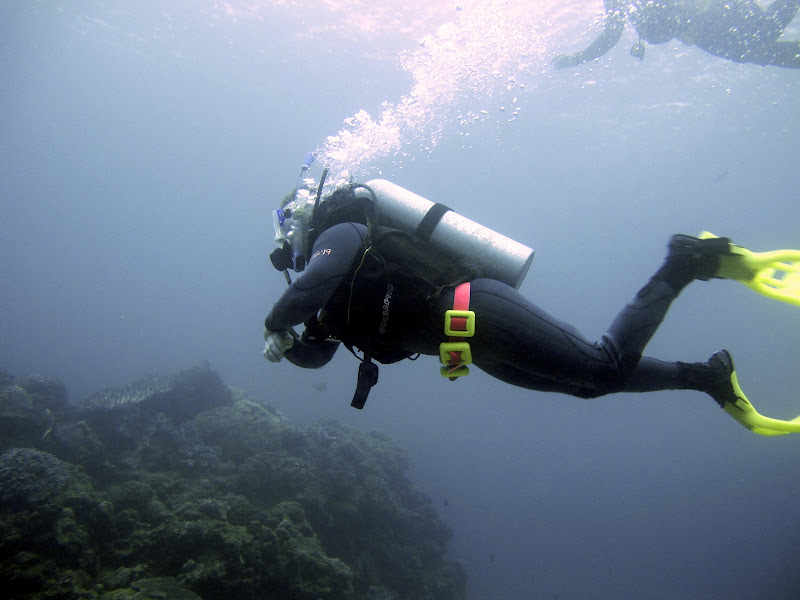 One of the reason I think we were able to spend so much time exploring the reef was due to the fact that everyone had great buoyancy.  When we did our buoyancy check at the end of the dive, everyone was properly weighted.  We all had our gear streamlined too so that helped reduce drag, making it easier to swim through the water.  I also noticed that no one used their arms to help them swim – that can really burn up a lot of air! 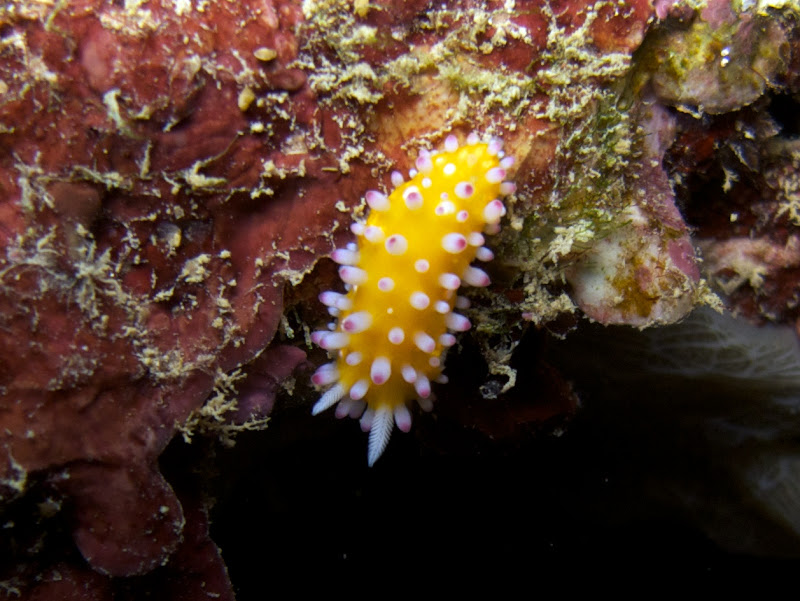 While kicking out I noticed a Cadlinella ornatissima nudibranch hanging out on a ledge.  I think this type of nudibranch has really cool colors – almost like an Easter egg. 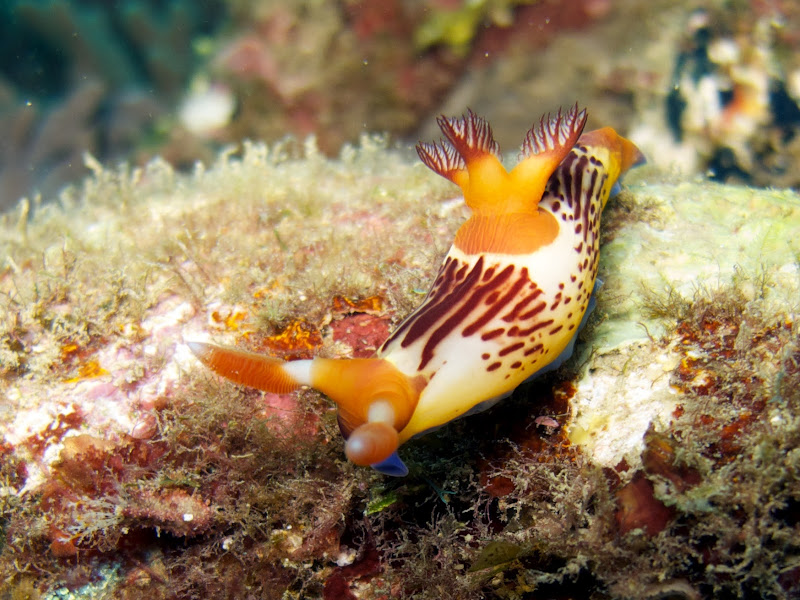 When we reached the halfway mark, Jason turned the group around and I took up the furthest position to the rear.  Glancing between the students and the reef, I spotted a Nembrotha lineolata nudibranch.  I got really excited because was only the second time I had ever seen this type.  It’s also one of my favorite nudibranchs.  The colors are among my favorite – red, blue, hints of yellow and orange.  They are absolutely fantastic to look at.  The real kicker for me is their face and rhinophores – those make them really photogenic. 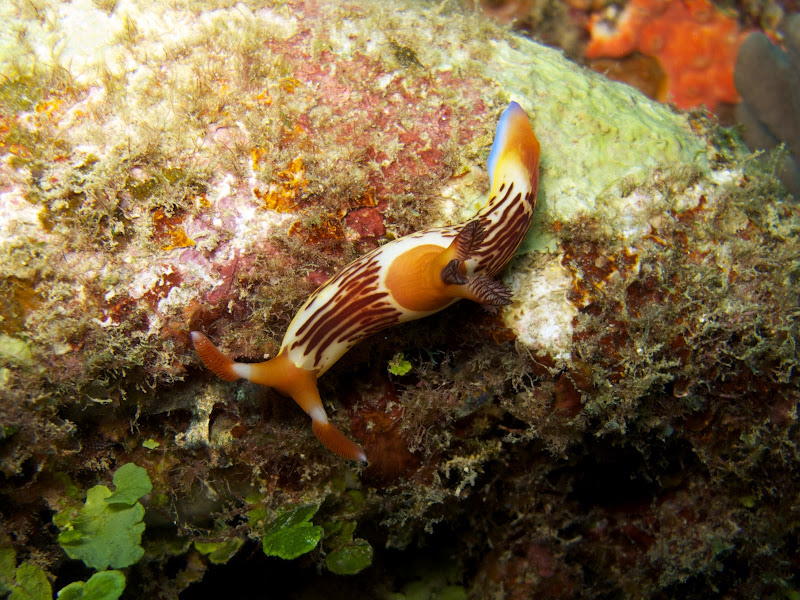 Unfortunately, I wasn’t able to get a very good photo of the Nembrotha lineolata’s face.  It seemed to be tucked down and he wouldn’t look at my camera.  Oh well…that’s what happens when you work with nature!  I seemed to do pretty good at having the flash illuminate the whole subject for once too. 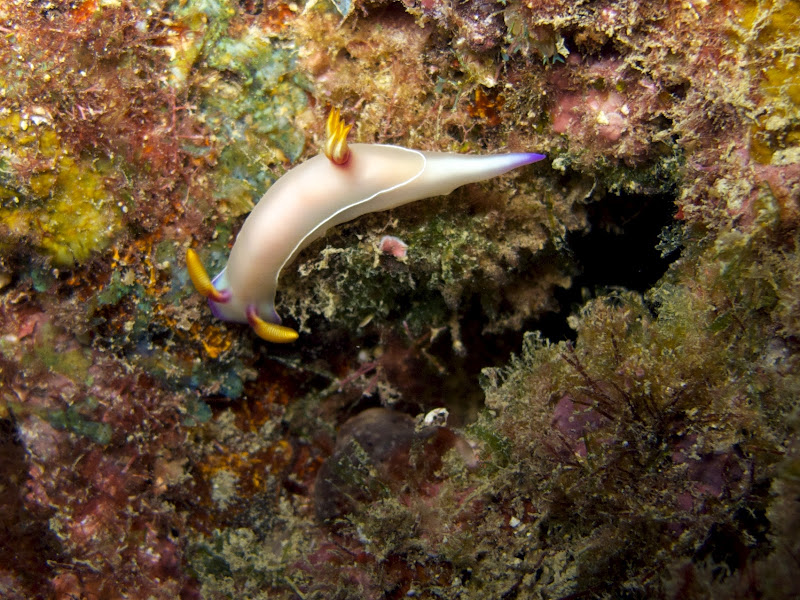 We also spotted a Hyselodoris bullocki and Fryeria picta nudibranch.  I never paid much attention to the differences between the Fryeria picta and Phyllidia coelestis nudibranchs before…I knew they looked alike but I guess you might say I was too lazy to really read up on the subject.  Yeah…guilty!  After looking at Robert F. Bolland’ s Okinawa Slug Site, I now know he easiest way to tell these guys apart.  The Fryeria picta can be distinguished by “the broad blue bases having large isolated gold-capped notal tubercles surrounded in black serve to segregate the two animals under field observations.”  The Phyllidia coelestis don’t have the isolated gold tubercles, but instead they are each connected with a blue base.  It’s amazing what you can learn when you actually spend time reading! 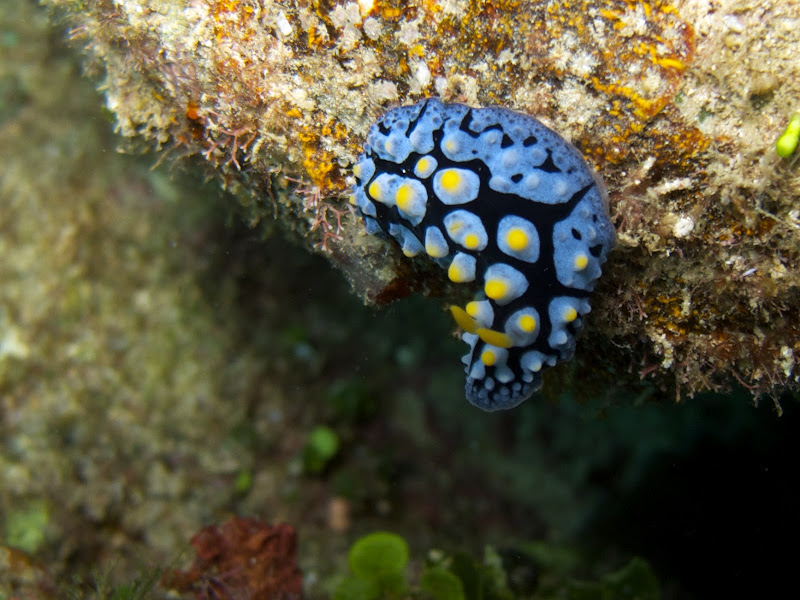 During our surface interval we filled out logbook, reviewed the skills we would work through, and Jason gave another great dive brief (he’s always so reliable).  Everyone, including myself, was excited to get back in the water.  Our first dive had been a major success and everyone wanted to go check out more of the reef. 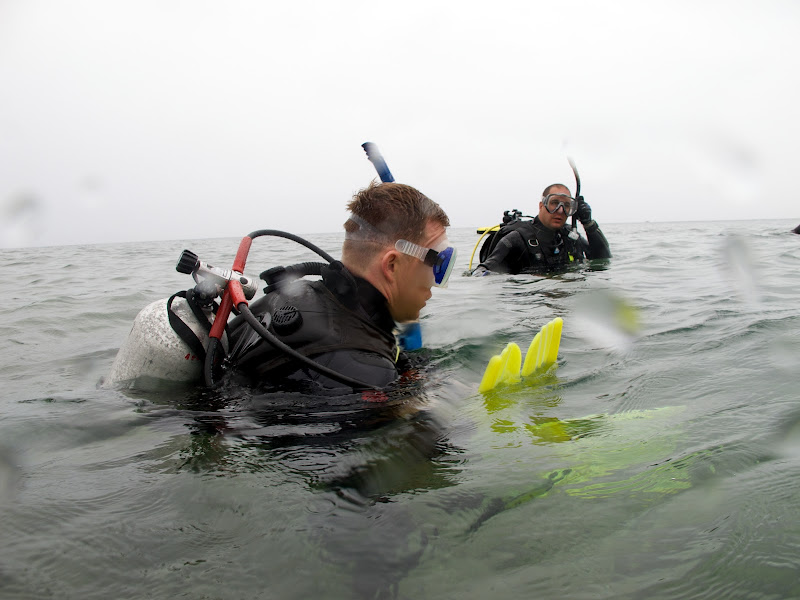 Jason and Christopher Preparing For Our Second Dive

After completing several drills on our second diver, Jason lead us through the southern part of Ark Dive.  We stayed around 20 feet in depth for the first part of the dive.  This allowed us to swim over the beautiful plants and coral.  While doing so, I  spotted a Pseudoceros cf. dimidiatus flatworm crawling on some rocks.  This type of flatworm makes me think of Halloween because of its black and orange coloration.  As it turns out, the coloration on a flatworm is a sign of toxins within the flesh – the potential predators are thus warned to stay away.  Wolfgang Seifarth provides a great synopsis about scientists conducting experiments with both colored and non-colored flatworms and their predator, the moon wrasse (cue dramatic music!).  Scientist conducted a series of tests to determine in the moon wrasse would be deterred from eating a colored flatworm versus a non-colored flatworm.    “The results showed that uncoloured models were more significantly attacked than coloured models and that there was no significant difference between attacks made to live flatworms and their respective models. These results clearly indicate the operation of aposematism in brightly coloured flatworms and demonstrate the operation of mimicry as the agar models were essentially non-living mimics of the flatworms.” (Seifarth) 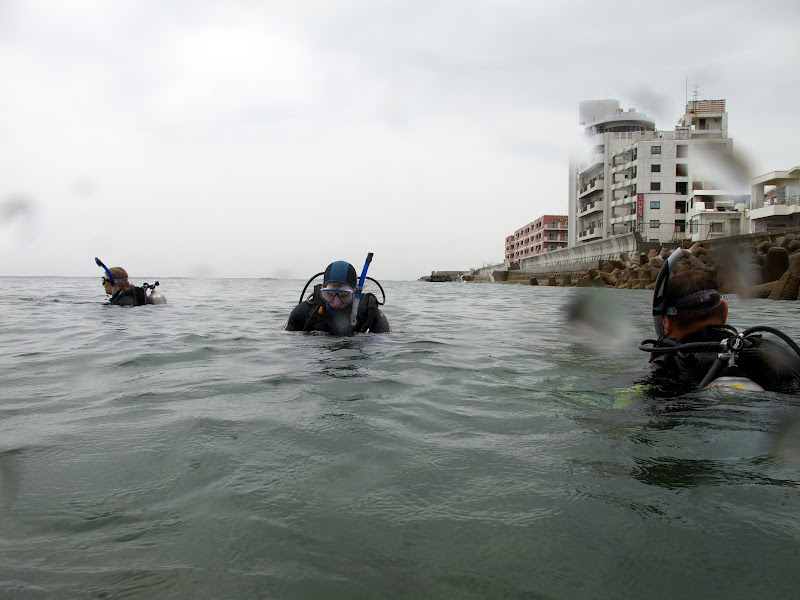 Russell and Salomon Finning Up – The Water Was So Calm 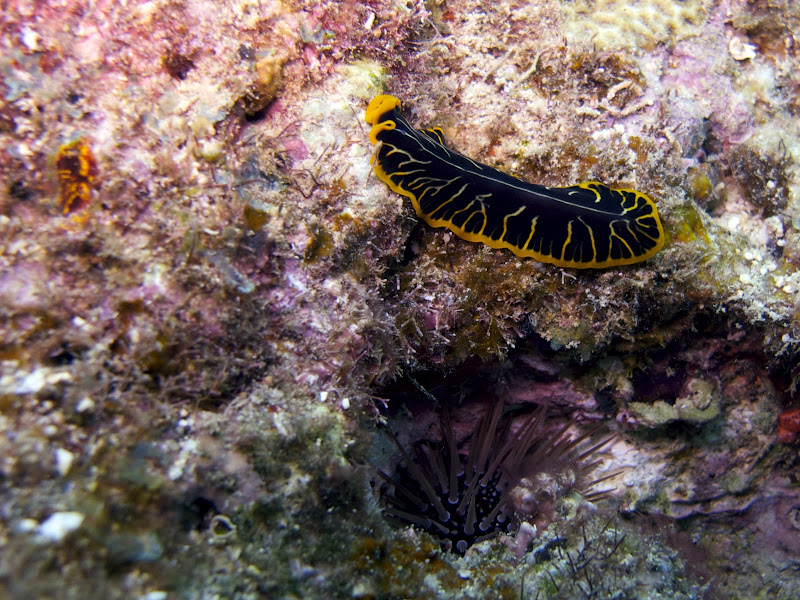 As we kicked about the coral and plants the next tiny object I noticed was a Tambja morosa nudibranch poking out from underneath some coral.  He didn’t seem to keen on coming out from under the coral so I only snapped a few pictures and then continued on with the dive. 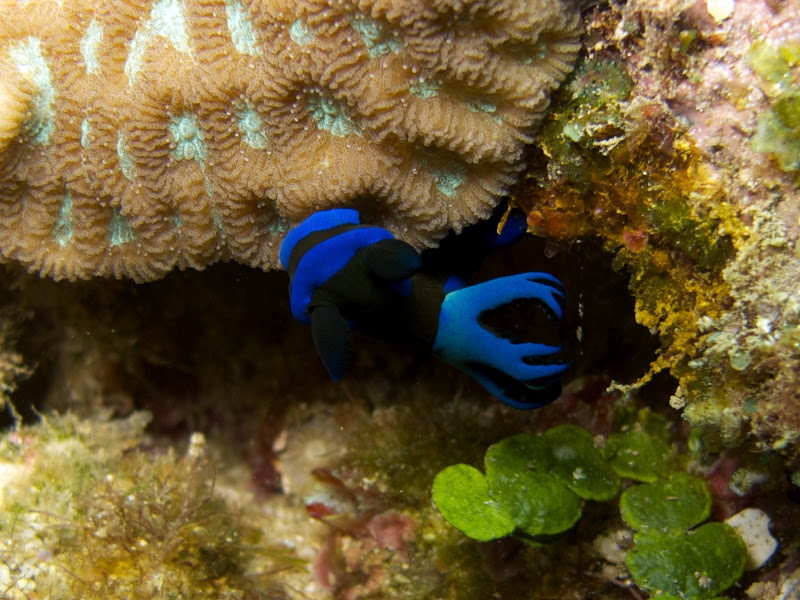 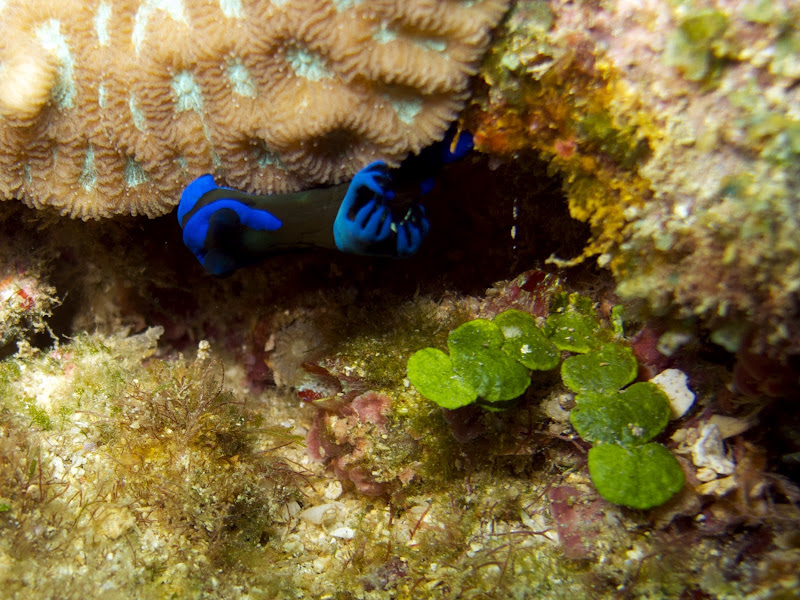 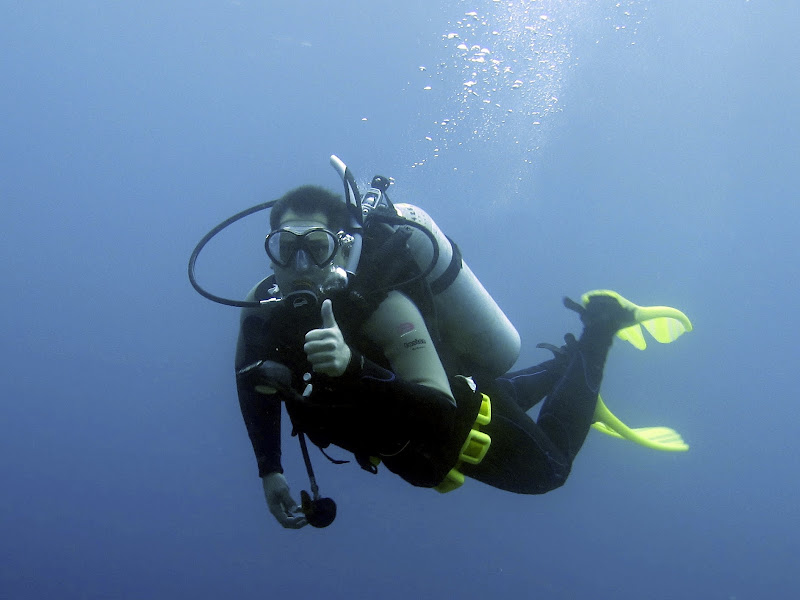 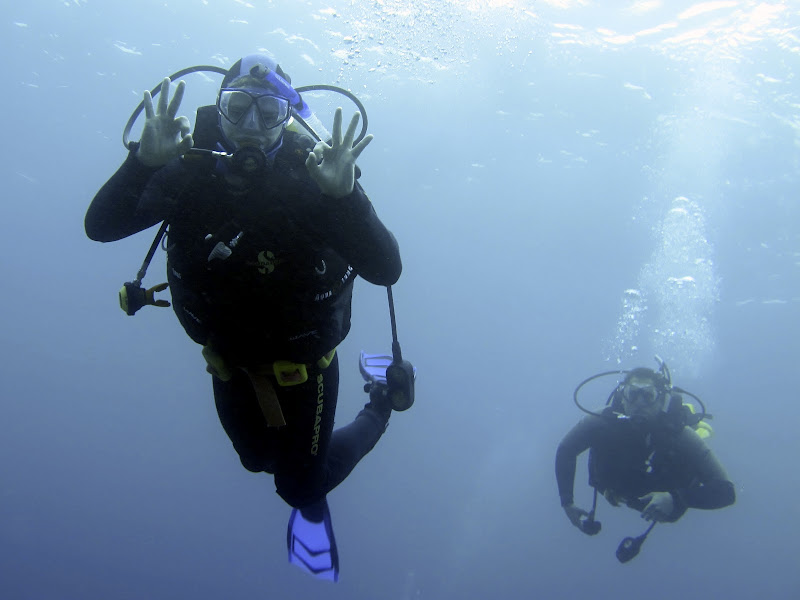 Russell and Salomon On Their Second Dive 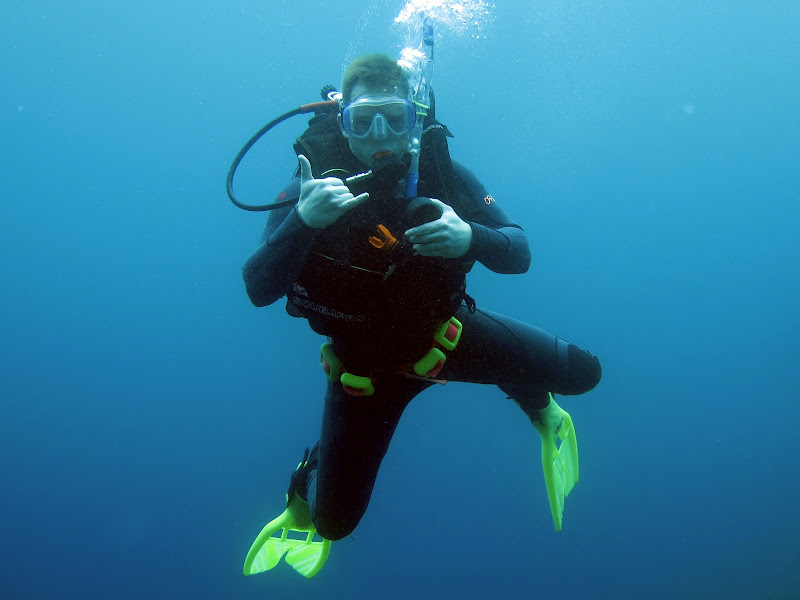 Right before entering into deeper water, I spotted a blenny watching us from within a rock crevice.  There are tons of these little guys all along the seawall.  Generally they like to sit atop the rocks and coral in shallow water that only about 5-10 feet deep.  When you get into deeper water, I’ve seen them numerous times watching me from within a little hole (like pictured below).  When I first see their eyes looking at me, sometimes I’m a bit surprised – they blend in to their surroundings so well. 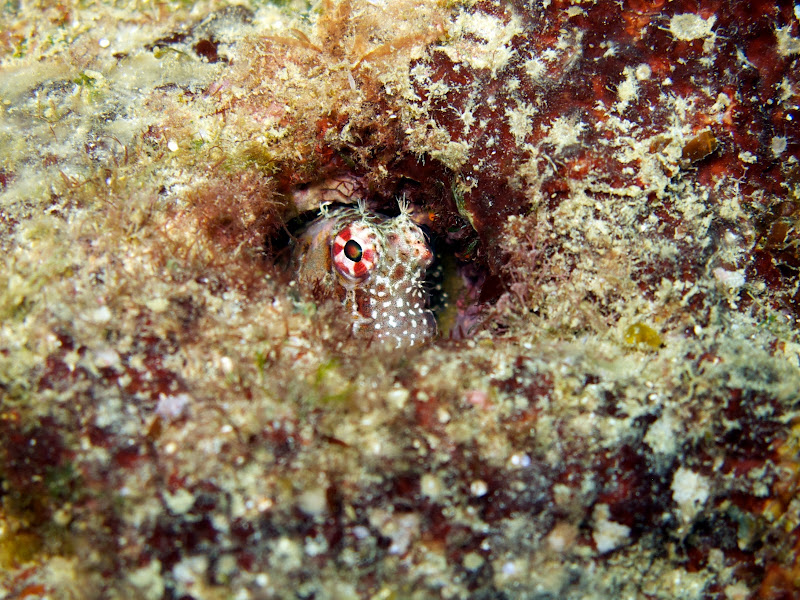 Blenny Watching Me From Within The Rocks

As Jason lead us over the drop in the reef wall, we came upon a White-Spotted Pufferfish.  It must have been nearly a foot long.  Surprisingly, even with 5 people gathered around to get a look he didn’t seem to scared about our presence.  Pufferfish usually “peace out” as soon as they see humans. 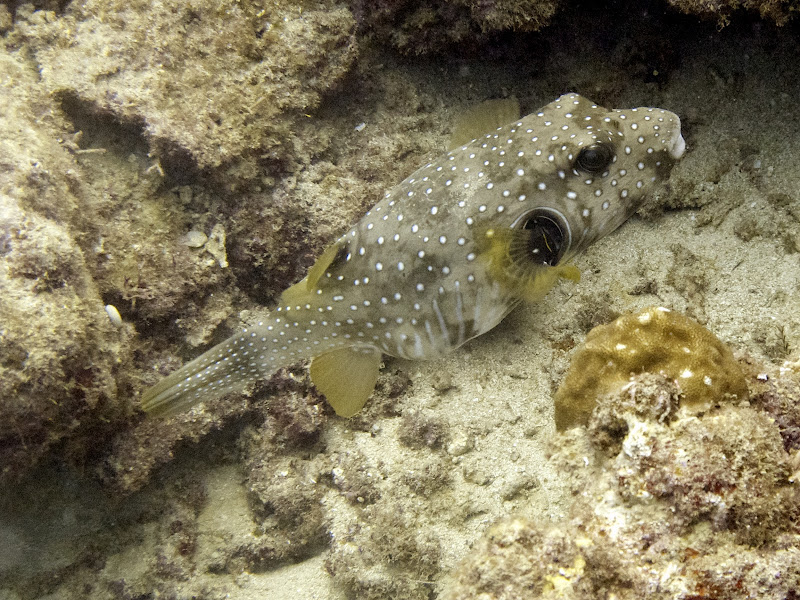 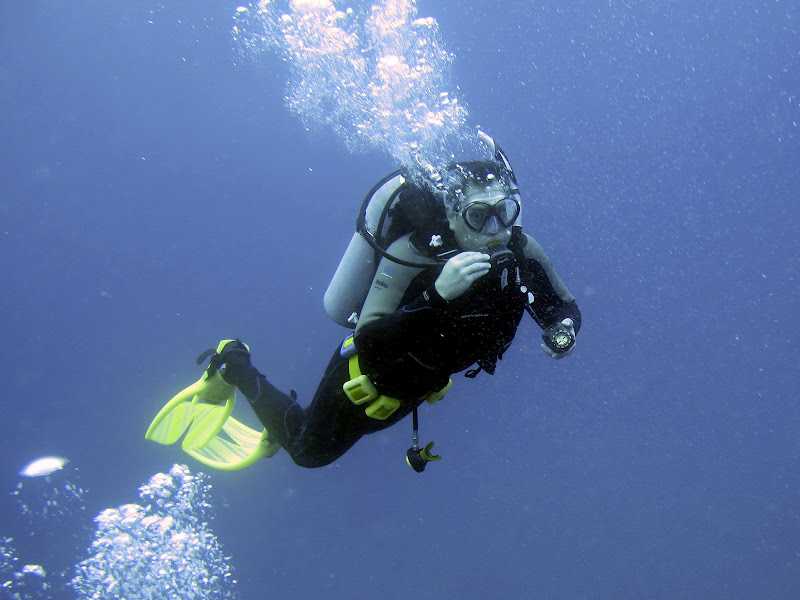 Salomon Checking Out The Reef 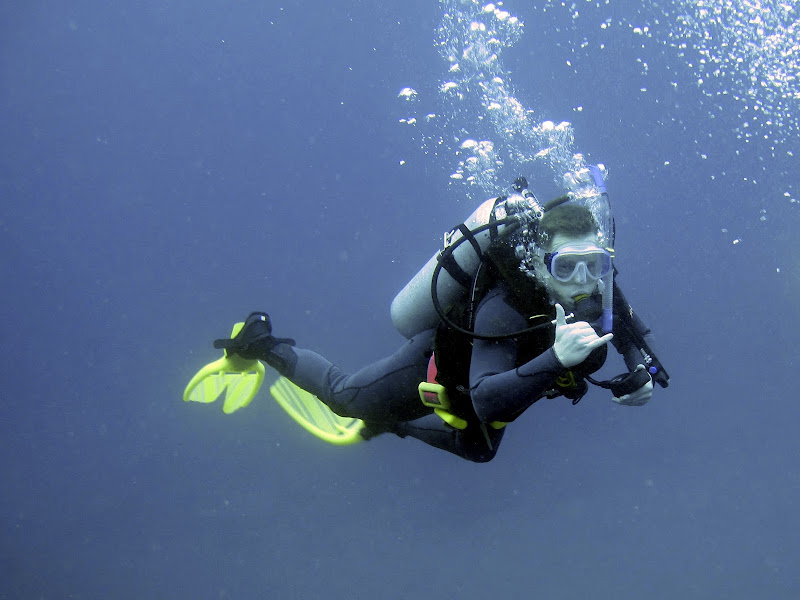 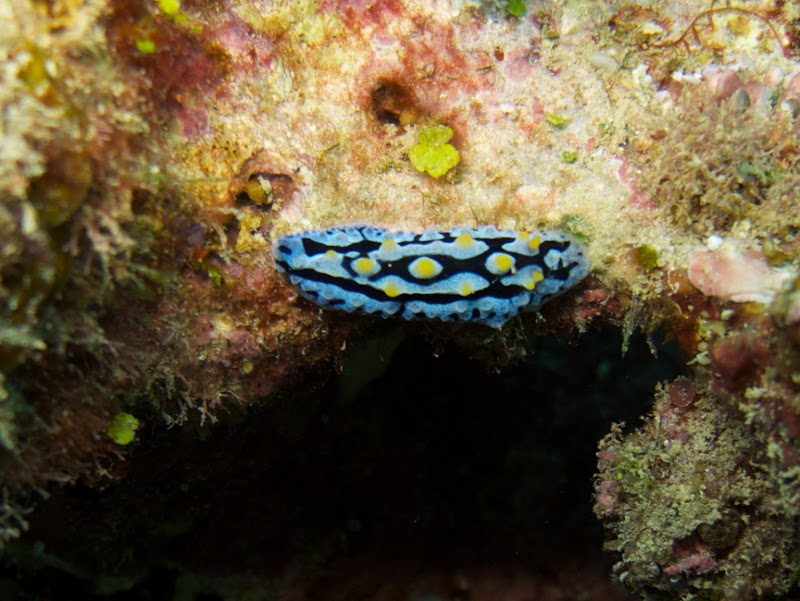 I managed to nab photos of two different Phyllidia coelestis nudibranch while heading back to where we would finish our dive.  Now that I finally know the difference between the Phyllidia coelestis and Fryeria Picta, I will hopefully do a better job of correctly identifying them in my blog entries! 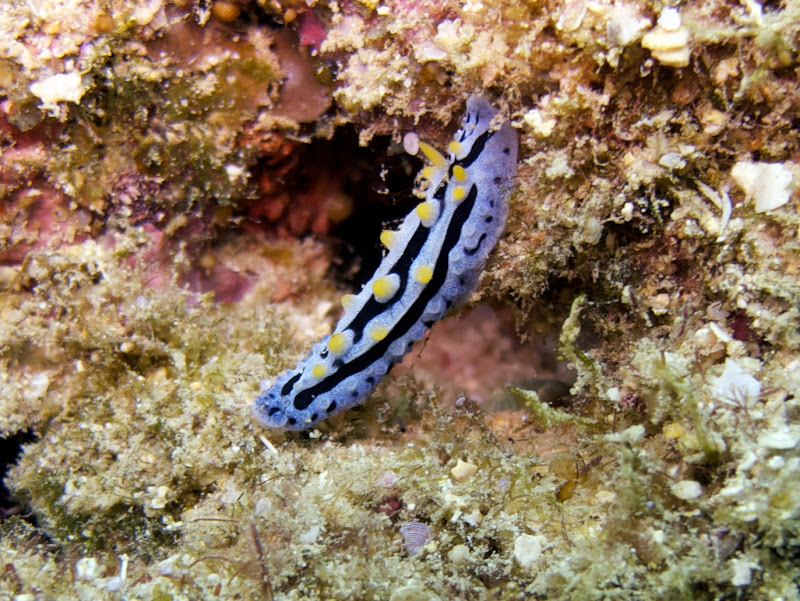 The last neat animal we saw was a white tasseled scorpionfish.  It was blended is really well to its surroundings that I nearly missed it. 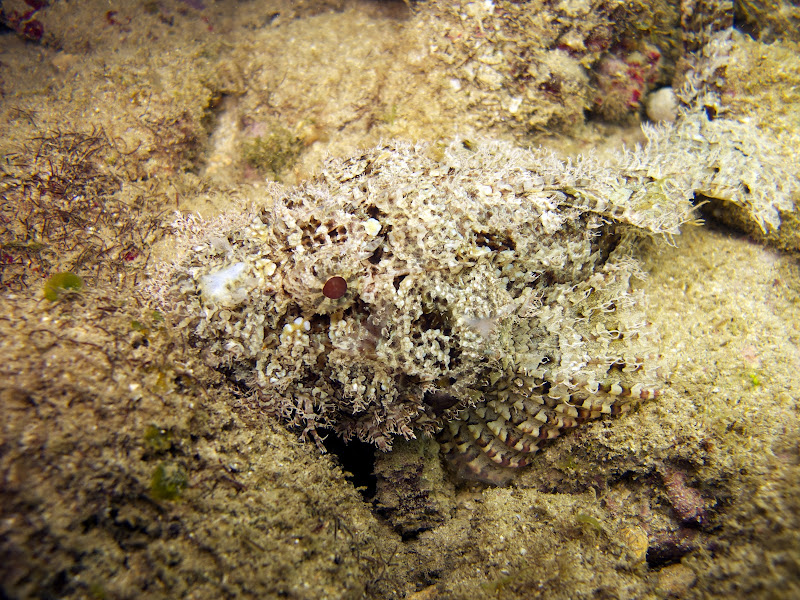 Russell, Salmon, and Chris did an excellent job on their first two certification dives and I look forward to diving with them again in the future!