Prior to meeting up with Erica for our dive, I noticed she wrote on facebook that she was a bit nervous to be diving at night.  When we met up at Ark Dive I made sure she received an extra thorough briefing and reminded her that we’d be going nice and slow.  She would also have Jason and myself supervising her the entire dive.  After we dove under the water, she looked so calm and relaxed….she really had me fooled if she had been a bit apprehensive about the whole thing.  After the dive I asked Erica if she enjoyed it and she said it was awesome!

Everything always takes a bit longer on a night dive so I always make sure to go nice and slow.  It helps everyone, including myself, relax and enjoy the dive.  Erica had told me she was a bit nervous so I tried to calm her fears by having Jason give a extra thorough briefing…step by step of what we would do and for roughly how much time it would take.  I also tried to emphasize all the cool things we’d have to keep an eye out for: phosphorescence in the water, “sleeping” fish, crabs and shrimp (not normally out and about at night), and the magnificent colors that we’d see as compared to the daytime. 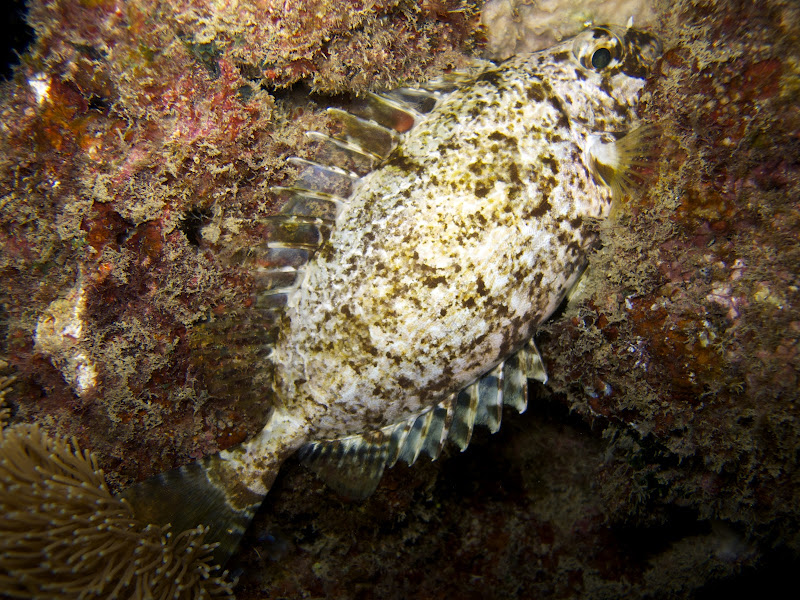 After checking our equipment over, including our lights (Erica’s was really bright!), we slowly made our way into the water.  Jason led the way and was followed by Erica and then myself.  We descended where the chain drops over the reef and settled onto our knees.  I asked Erica is she was OK – answer: OK!  Sweet!  We then kicked over to a small patch of sand where I motioned for Erica to turn off her light.  A few moments after she had done so, I started waving my hands in the water to see if any phosphorescence would light up.  I got a few sparks and then Erica started trying as well.  I always seem to have way too much fun with this drill.  After about a 40 seconds of playing in the dark, we turned our lights back on and I signalled for Erica to begin her underwater navigation drill with Jason – she did a great job and hit me spot on when shooting her reciprocal azimuth.  With our skills completed, we moved on to the fun part – underwater exploration! 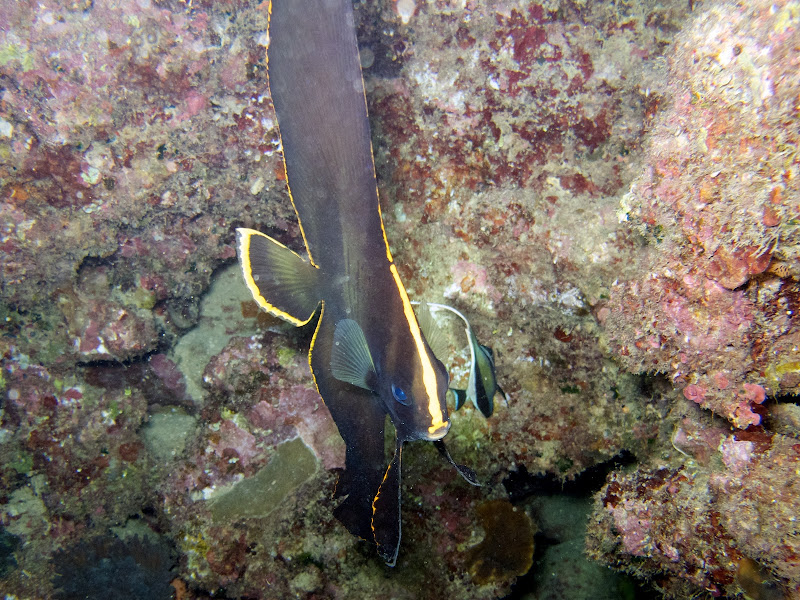 As we came into the deeper water to the north of “the classroom” I noticed a white and brown speckled fis wedged into between some rocks.  It was totally oblivious to me, definitely was in it’s resting state, so I called over Erica.  We inspected it for a few minutes and I snapped some pictures.   We then kicked along the wall and enjoyed the wonderful colors of the coral and plants.  Every once and a while we’d see some fish dart among the crevices when our lights passed over them.

As we returned to 25 feet in depth, Erica spotted a large juvenile Pinnate Spadefish.  It had a black body with a small band of orange on the tip of its fins and an orange stripe running down the center of its back.  I always think these fish look so cool and they are generally in this same area whenever I go night diving….not always there in the daytime though.  There are two types of juvenile pinnate spadefish.  The first is  classified as small, being about 5 inches (12 cm) in length.  As the juvenile gets older is will eventually start to develop a faint white band behind the pectoral fin.  Its dorsal and anal fins also become longer and more pointed at the end.  As I was researching this the juvenile pinnate spadefish online, I came across several interesting articles about the small juvenile using mimicry.  Apparently, some scientists believe that its coloration coupled with constant movement is an attempt to mimic a poisonous flatworm.  An interesting concept but I’m not 100% sold… 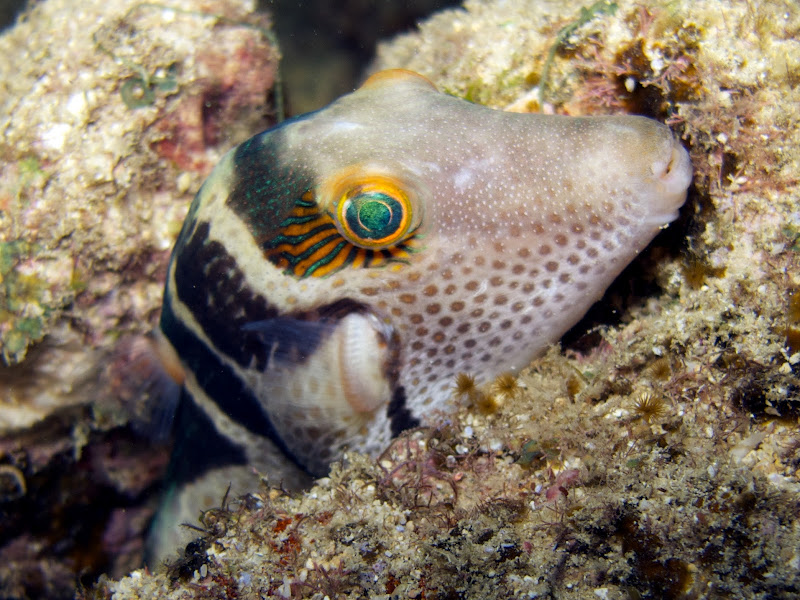 After coming back into the classroom, Erica and I both spotted some fish that were resting on the rocks.  Erica spotted a really cute white-spotted pufferfish and I came upon a crown toby.  I was busy photographing the crown toby when I realized Erica had something cool to show me so I went over to see what she was looking at.  The white-spotted pufferfish was probably about 6-7 inches long and it was wedged into some rocks.  Oohhh…photo op!  We positioned our lights to help achieve the best picture (Erica’s light was really bright) and then I started snapping away.  After 2 photos the pufferfish became aware of something going around him and “woke up.”  We decided to not disturb him any longer because fish need their beauty sleep too, right? 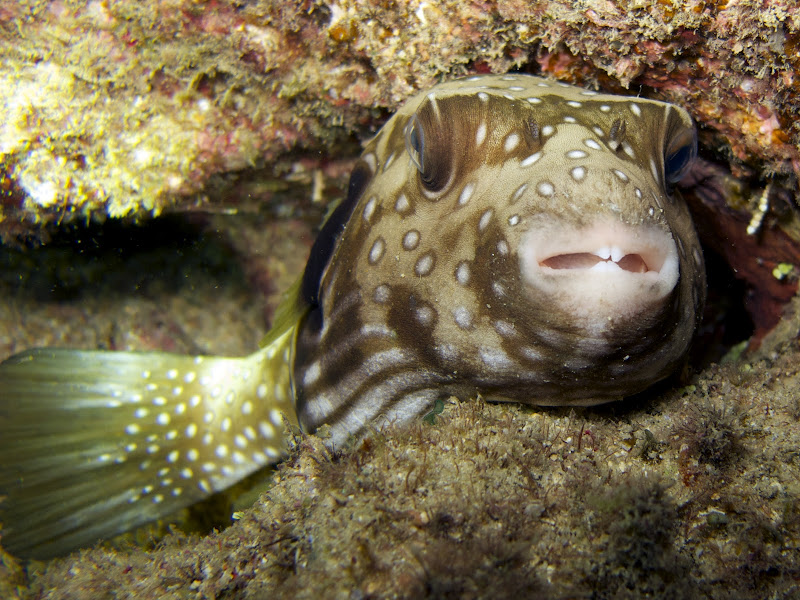 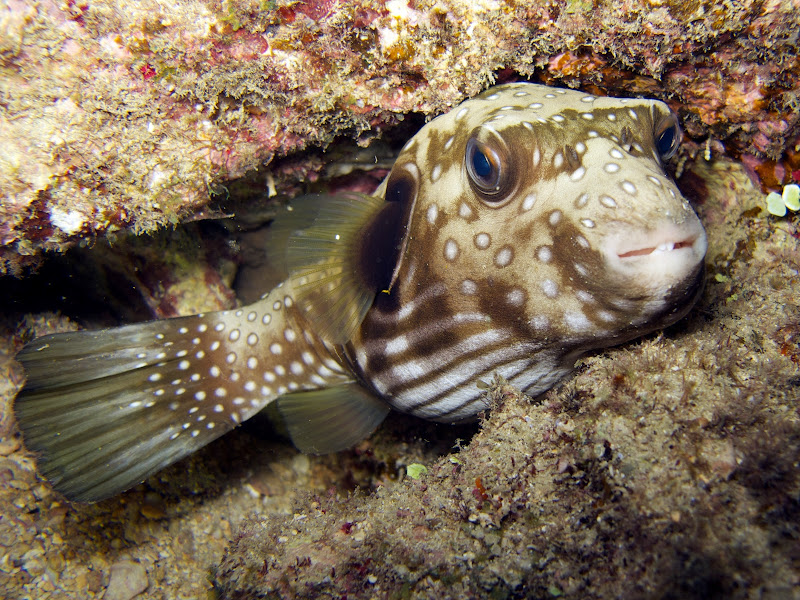 Thinking our dive was pretty much done, we kicked back to the chain to make our safety stop.  As I got closer to the rock on which the chain is connected I noticed an anomaly on the underside of a ledge.  When I was about 3 feet away I realized it was a tasseled scorpionfish.  Erica and Jason came over to inspect it while I tried nabbing some photos. 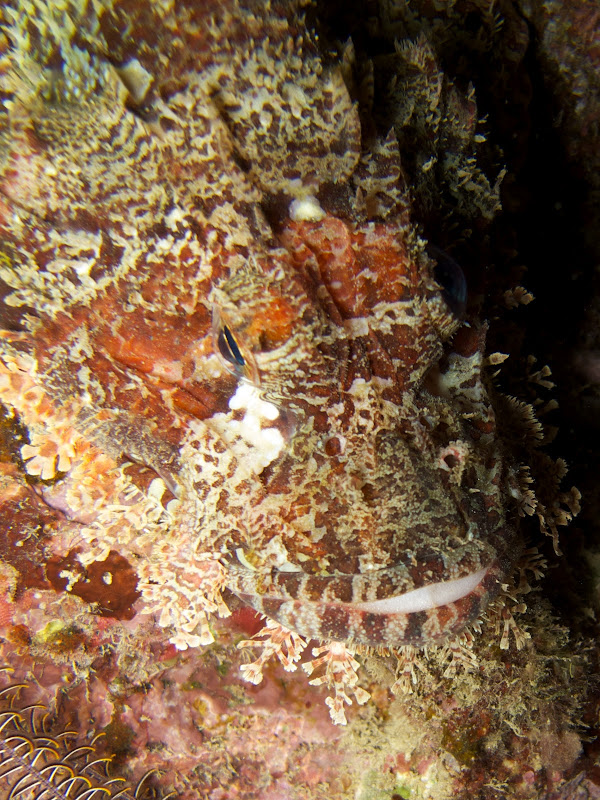 I’m still amazed by how tasseled scorpionfish can litterally perch themselves upside down on rocks.  It’s like they have duct tape along the undersides of their body.  Ok…maybe not.  I guess they wedge their fins in to get a strong hold.  Either way, it’s pretty awesome when seeing them in such a manner. 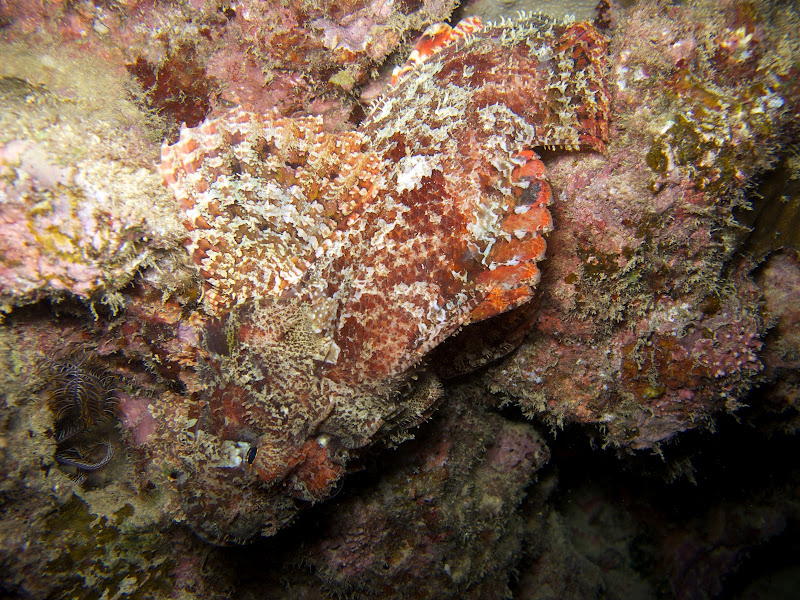 We began out safety stop positioned near the chain and I searched along the reef wall for any cool last minute photo ops.  I normally see something unique to end the dive.  Today was no different.  As I searched among the crevices I spotted this weird mollusk-like creature I had never seen before.  As I was shining my light on it, to started to retract into it’s hole so I quickly took a photo.  To tell you the truth, just the way it moved and looked has me pretty creeped out!  Maybe Erica should have been more worried about me at this point! hahaha 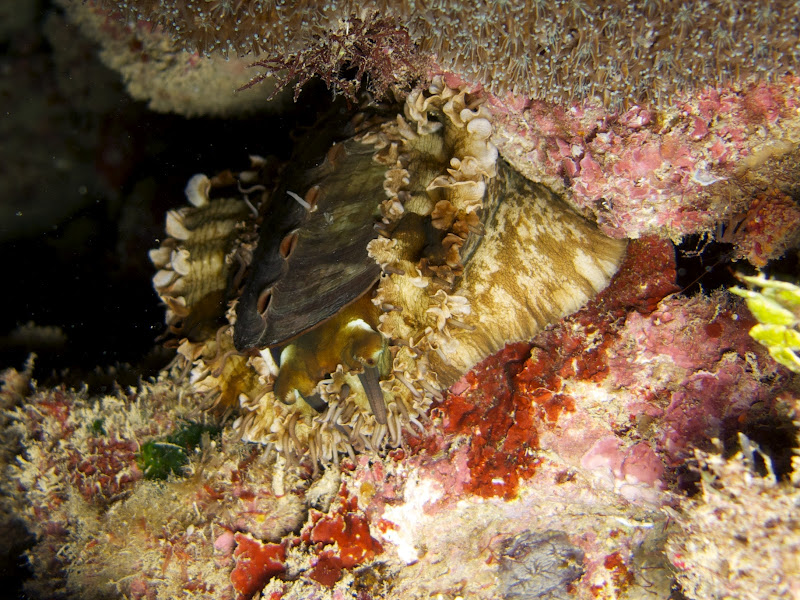 After returning home I was very curious about the weird animal I had seen.  I really wanted to know what it was!  Thankfully, Randy Birt helped me out by saying it was a Ass’s Ear Abalone, named after its shells resemblance to a donkey’s ear. 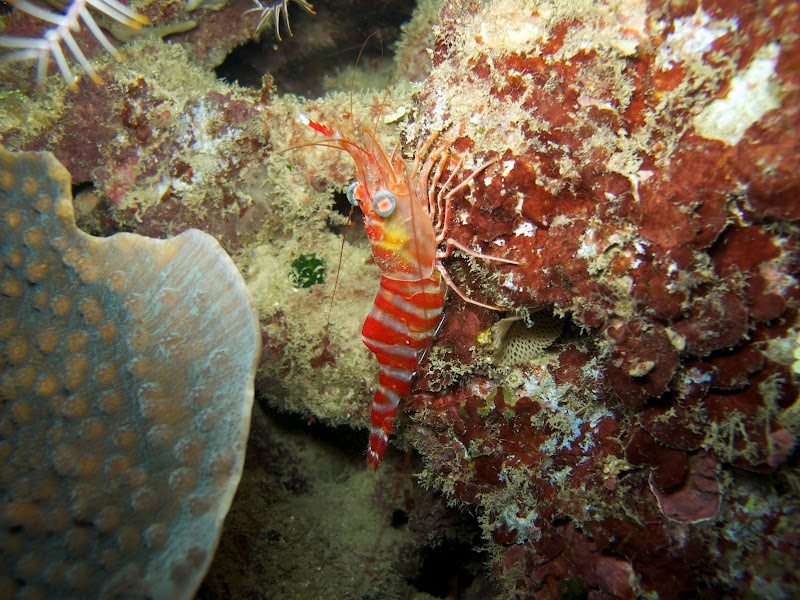 The last thing I spotted before heading to the surface was a shrimp.  It was actually pretty friendly and didn’t try to flee so I was able to get some nice photos.  After completing our safety stop we made a slow ascent and then surfaced.  I asked Erica if she enjoyed the dive and she said it was really fun.  I was so glad to hear that it hadn’t freaked her out.  She even told me she’d like to go out again in the future and do some more dives at night.  GREAT!!!!  Erica did a great job completing her Advanced Open Water Diver certification and we have plans to meet up again in the future to hang out and dive some different spots on island!