Chrissy came to me as a private student because of her busy hours  – she needed to have someone with a flexible schedule.  We hit it off right away and had an absolute blast throughout her certification.  Our first two dives happened at Ark Dive and we saw a ton of wildlife including several nudibranchs and an octopus.  Not bad!

At 0900 we met up at Ark Dive for what would prove to be 2 really fun dives.  After giving a dive brief and suiting up, we entered the calm water.  Visibility was looking much better than it had the previous few days.  Because our first dive together mainly focused on an underwater tour, I reminded Chrissy to be aware of her depth while we were underwater – try not to resurface and don’t sink below my position.  Chrissy handled everything like a pro – it probably helped that she was extremely comfortable in the water. 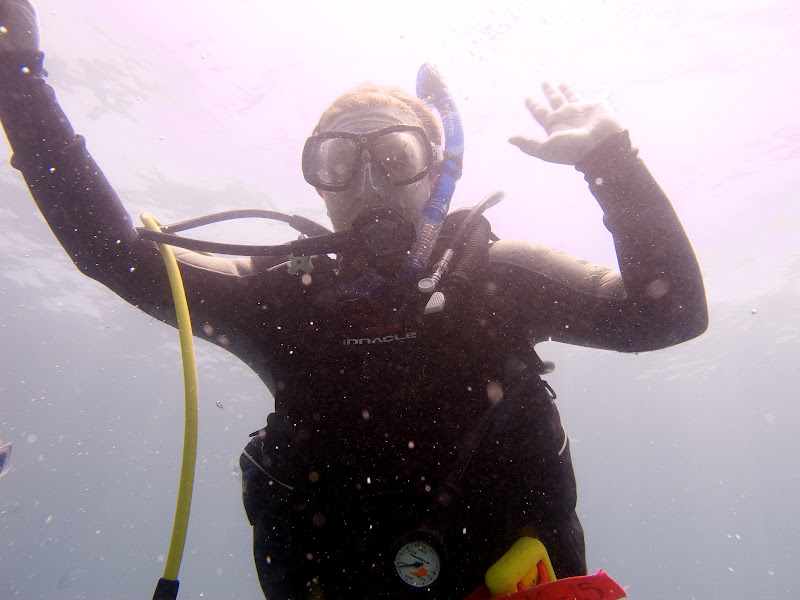 Chrissy Making Her Descent On Our First Dive

As we made our descent we were instantly greeted by a school of scissortail sergeants and carlson’s damsels.  People often bring out fish food to feed these little guys so they were coming to see if we had any grub for them – they were seriously disappointed in us.  No food, sorry guys! 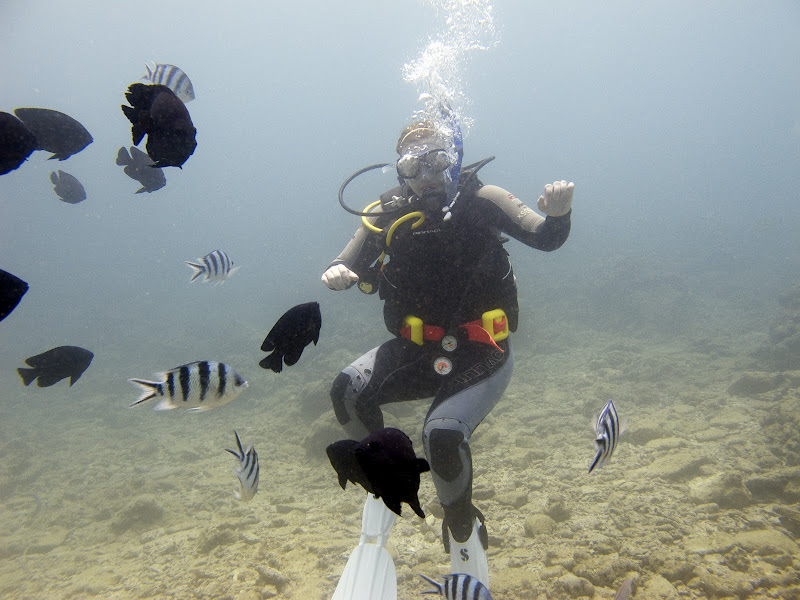 After making a smooth descent we began our underwater tour by heading north.  Chrissy looked super comfortable in the water – she had great buoyancy and her breathing was very relaxed.  The only hang up we seemed to have was her mask fogging up on her.  Despite scrubbing the inside with abrasive toothpaste to remove the thin layer of silicone from the inside (if this layer isn’t removed, you’ll always get foggy lenses), they were still fogging up on her.  After we got back out of the water, I suggested that Chrissy scrub the lenses again with toothpaste and then try out a commercial defog or spit. 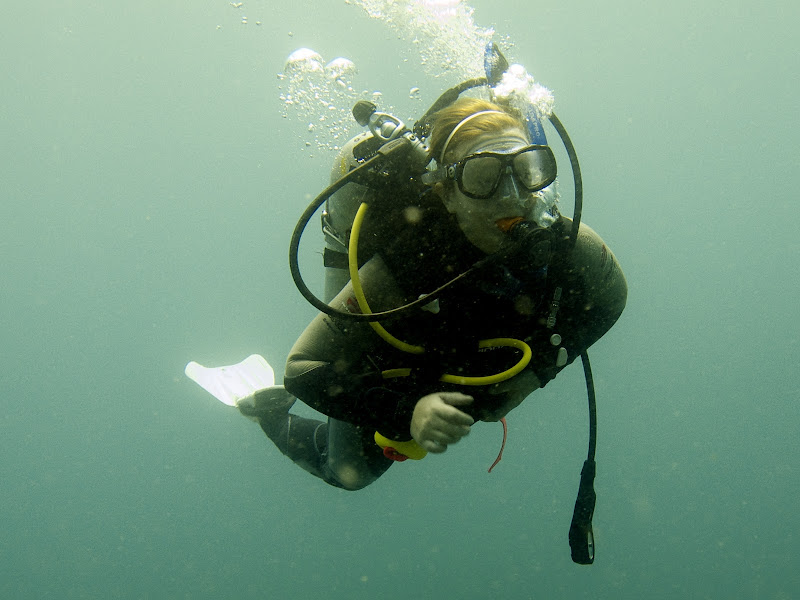 We came across some cool nudibranchs while diving.  Our first spotting was of two Phyllidiella pustulosas side by side.  Perhaps they were mating?  I’ve seen other scuba divers posting photos of nudibranchs mating recently so perhaps this what the same thing…or maybe I’ll never know.  Here’s an interesting fact about the reproductive nature of nudibranchs – they are simultaneous hermaphrodites, meaning they have both male and female reproductive organs and they can mate with any similar nudibranchs they happen to come across. We also spotted a Fryeria picta and a Phyllidia ocellata nudibranch on the dive.  It’s been a few weeks since doing this dive so I can’t remember very many specifics other than the photos I took during the dive. 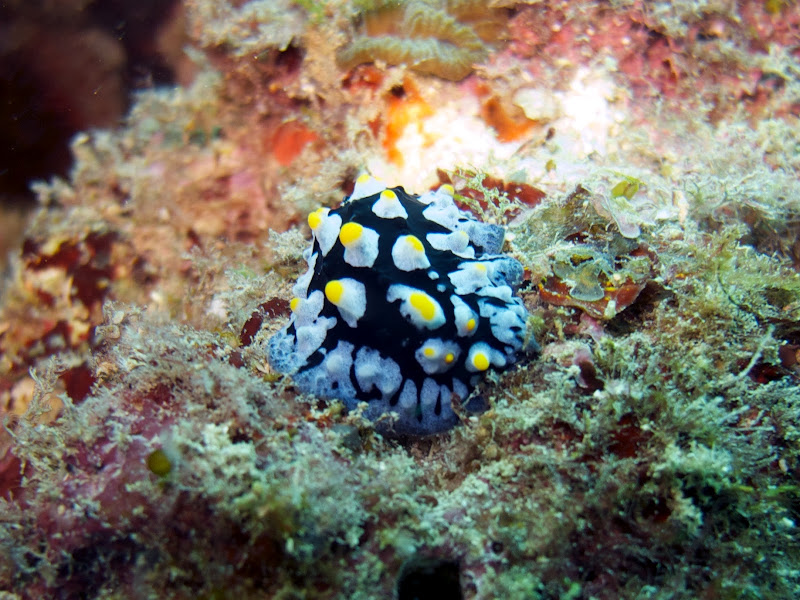 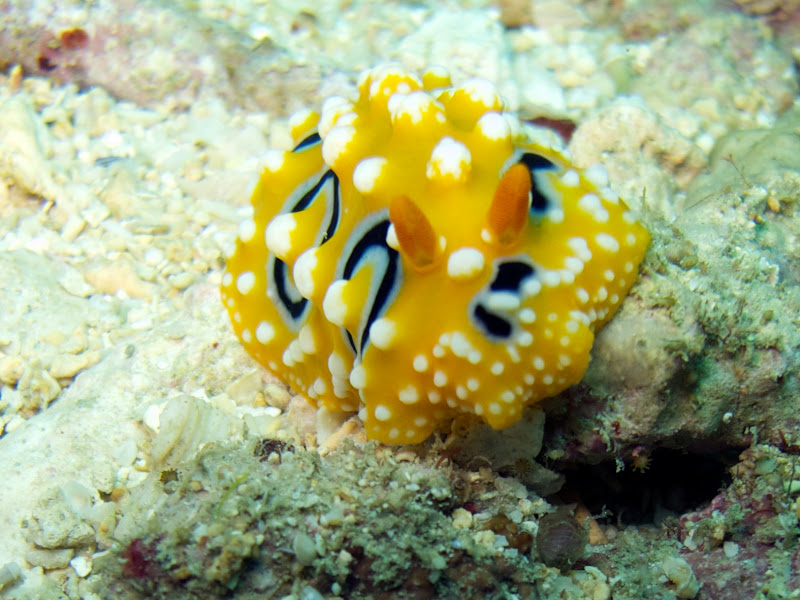 As we returned to the chain and buoy line, Chrissy and I made a safety stop at 15 feet for 3 minutes.  We hadn’t gone deep by any means but it’s always a good practice to make a safety stop at the end of each dive.  According to an article I found on Scuba Diving Magazine’s website, “all dives are decompression dives, and that DCS can and does occur even when you’ve stayed within so-called ‘no-decompression limits.’ Studies clearly show that pausing at about 15 feet allows you to offgas nitrogen before ascending through the zone of greatest pressure change, near the surface. Nitrogen that hasn’t been eliminated can bubble out of tissues rapidly during the last part of the ascent, causing DCS.  There are other safety reasons for the stop. The air in your BC and the bubbles in your wetsuit also expand rapidly during the last 15 feet and may cause you to become significantly positive without realizing it. Stopping gives you a chance to adjust your buoyancy so you don’t lose control of your ascent.  Safety stops also allow you to survey surface conditions and boat traffic before surfacing.”  Even though the buoy line was available for Chrissy to hang on to during the safety stop, she did a terrific job of maintaining neutral buoyancy. 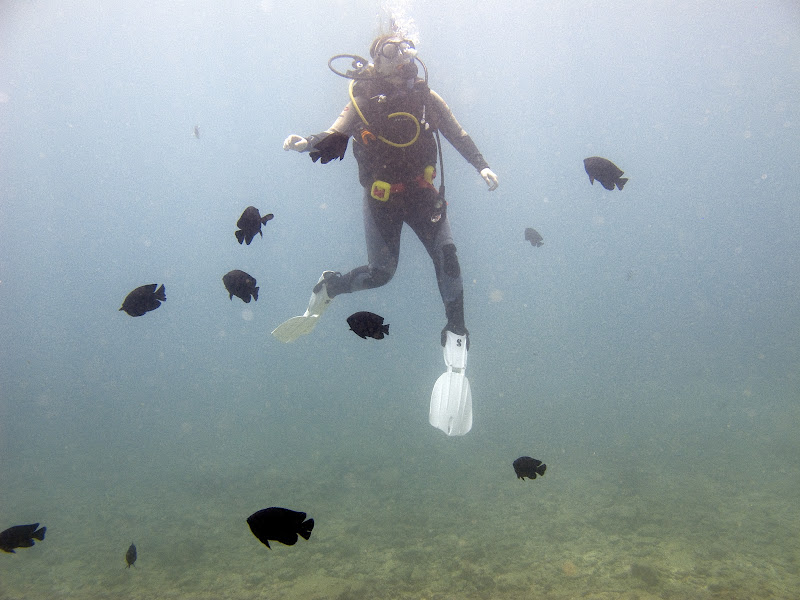 After surfacing both Chrissy and I were excited to complete our logbook, switch out our tanks, and get back into the water.  We decided to explore the southern portion of Ark Dive on our second dive – I wanted to see if I could find the clownfish that I had seen on a previous dive.  Chrissy joked that we would be out “Finding Nemo.”  It probably sounds really cheesy when you read that, but we were cracking up.  Just the way Chrissy said it was hilarious…you really had to be there. 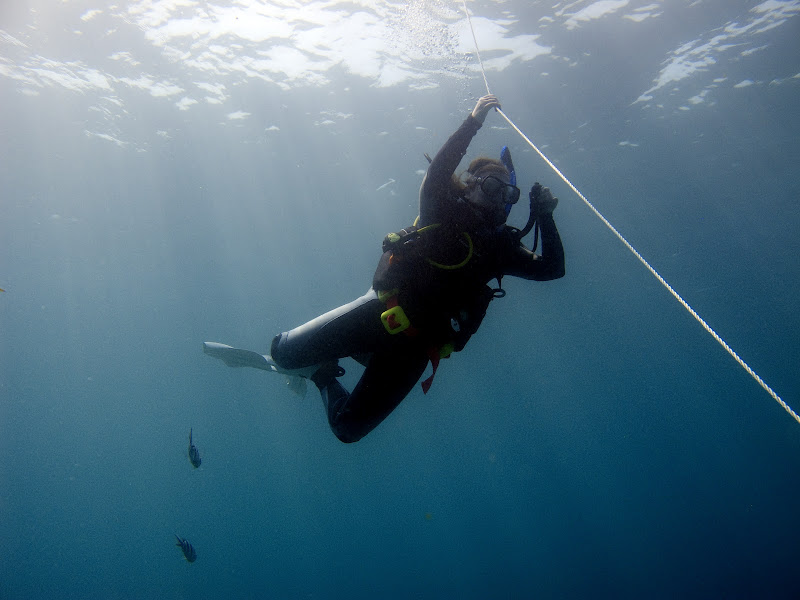 Chrissy Making Her Descent On Her Second Certification Dive

After making our descent, Chrissy and I zipped through some skills.  She did great on every single one.  The nice part about private lessons is that everything goes quicker and there is more time to explore the reef.  We only spend about 3 minutes going through the skills (a regular class normally takes between 15-18 minutes) and the rest of our dive was spend exploring the reef. 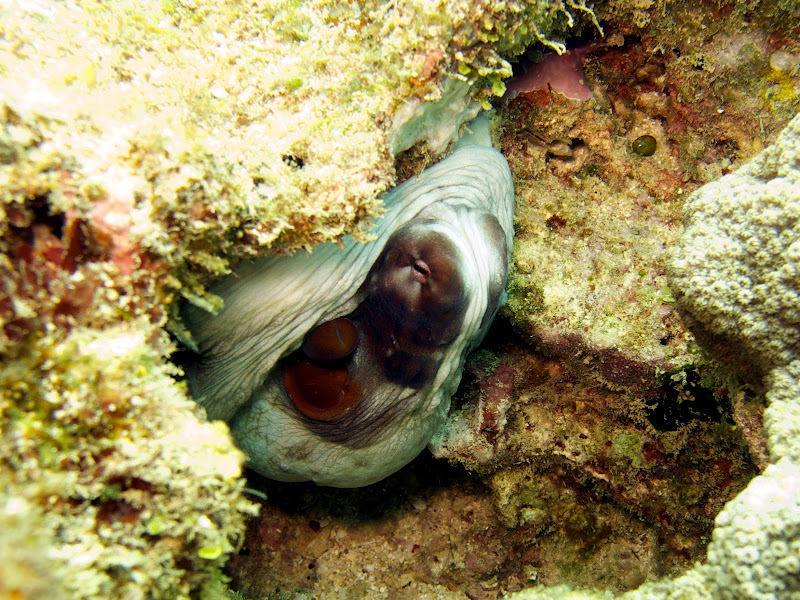 As we kicked along the souther wall of “the classroom,” I noticed a small octopus hanging out in one of the crevices.  I pointed it out to Chrissy and we watched it for a few minutes, and I managed to get some pretty nice photos! 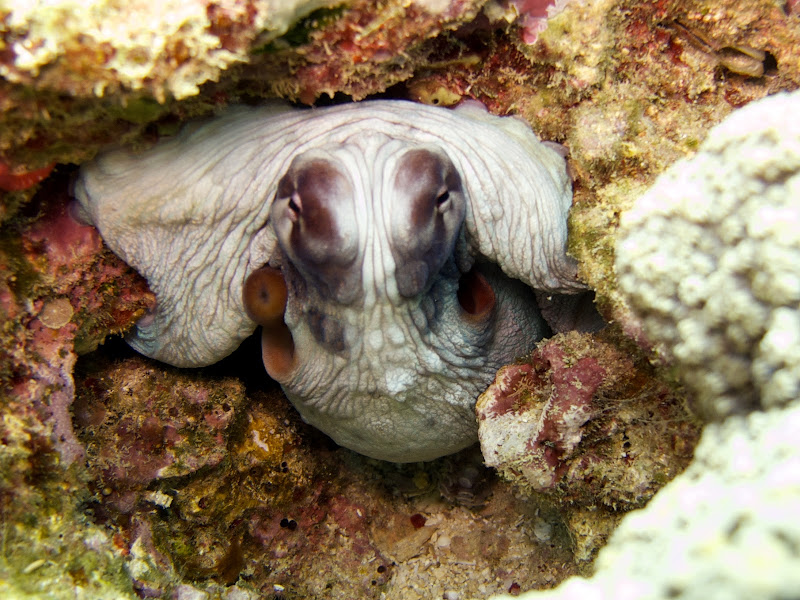 When we first saw the octopus it was a brown color and fit in very well with its surroundings.  Once we approached it changed its pigmentation to a white color.  After doing a little online research, I just found out that this is a sign of fright.  If the octopus had been angry with us, it would have turned red.    I’ll be sure to mention this cool little fact to other students in the future! 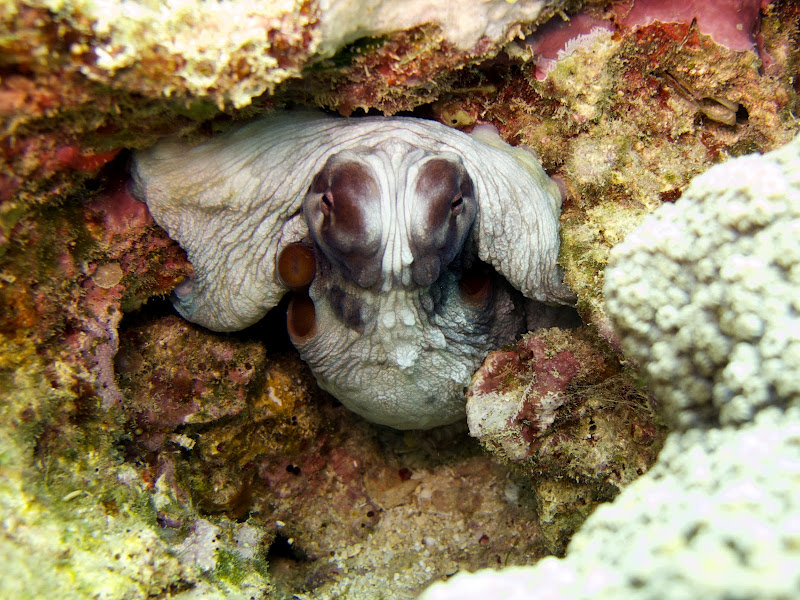 Octopus Hiding In The Rocks

We never managed to find the clownfish…I don’t think we were shallow enough.  At the end of the dive we concluded that “Finding Nemo” was an epic fail.  Boo!  However, we did manage to spot some pretty cool nudibranchs.  Resting on a ledge I saw a Cadlinella ornatissima.  For some reason I always think these nudibranch look delicious – of course I know they wouldn’t be tasty at all – they remind me of these delicious lemon squares my mom used to make for our family as a treat.  They were sweet and sour…yum…now I’m craving them! 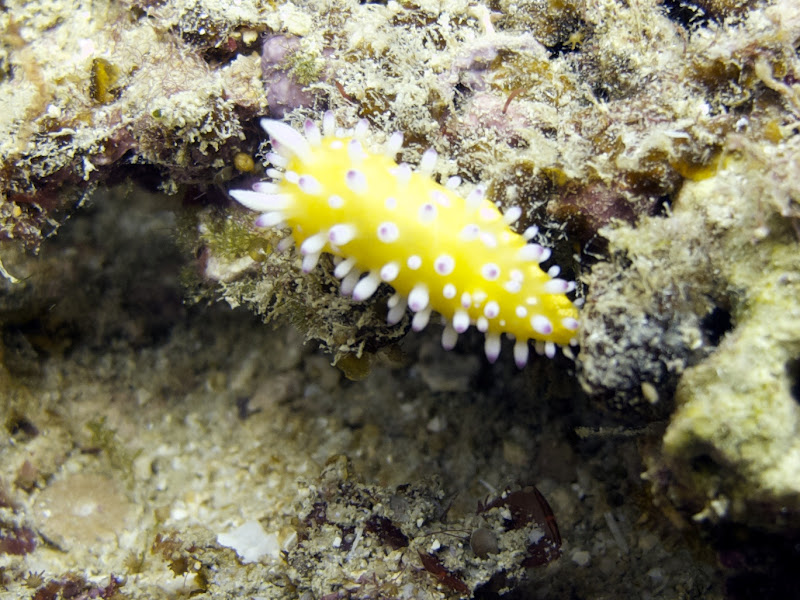 We also spotted a Aegires citrinus nudibranch.  For whatever reason, I always have a difficult time photographing these guys.  There is always some sort of overexposure.  Something to play around with on my camera in the future for sure. 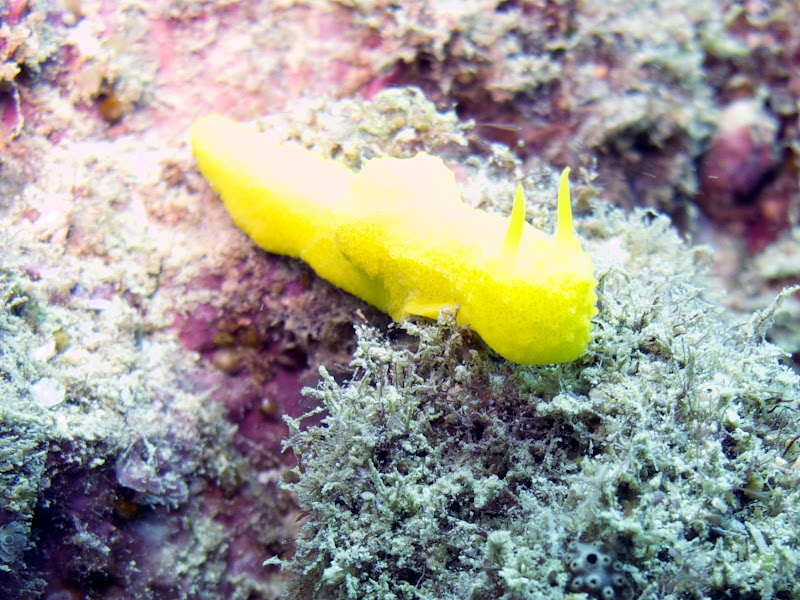 We also spotted a Chromodoris colemani nudibranch.  My second picture focused nicely on its brachial plume. 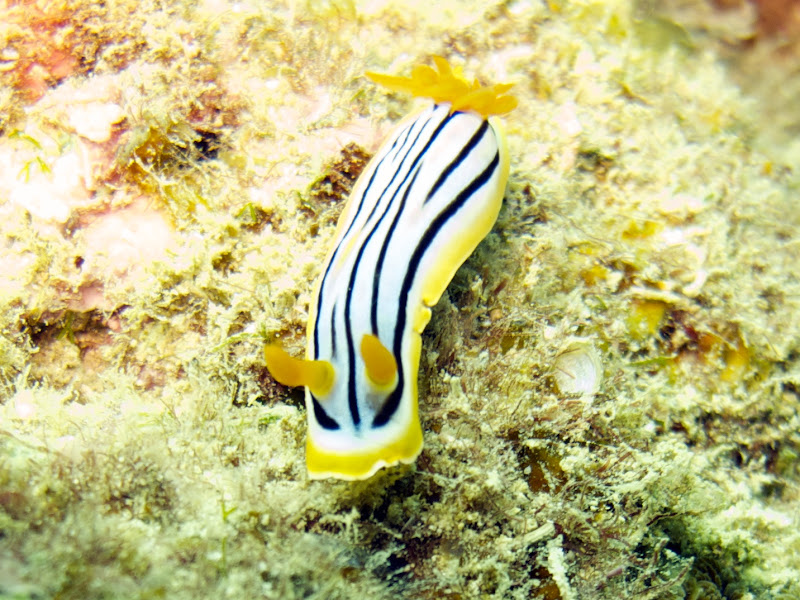 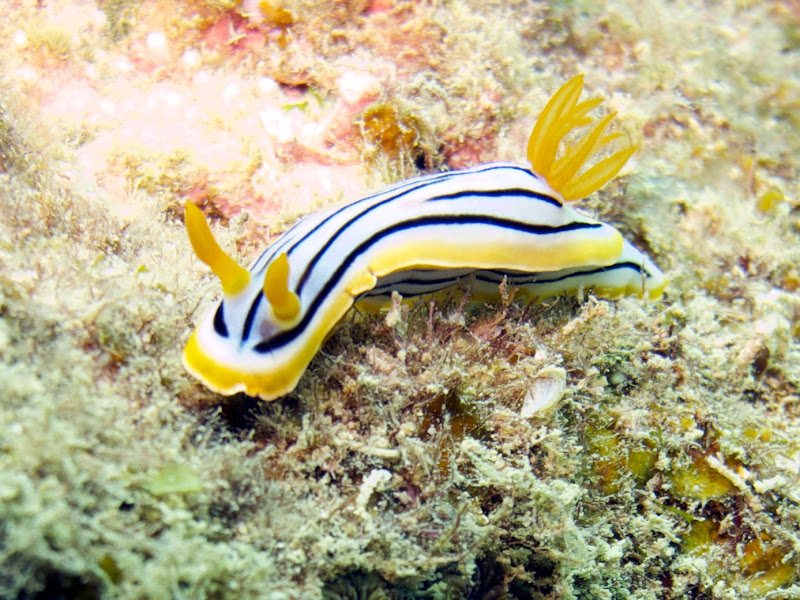 And out last nudibranch sighting was of a Chromodoris hamiltoni.  It had a nice blue color on it’s body and I think this might have been my first spotting of this type.  Pretty cool!  Apparently these nudibranchs are uncommon around Okinawa. 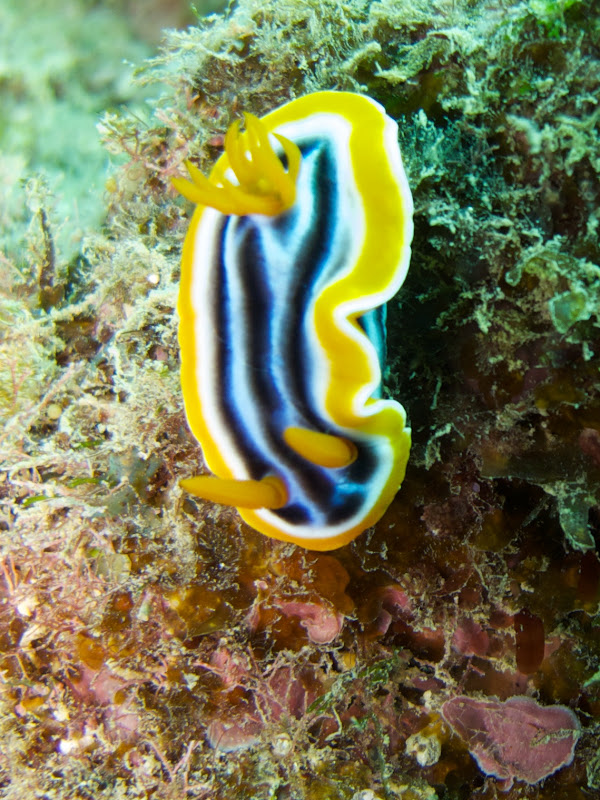 We finished our dive by doing an out-of-air, alternate airsource use and ascent.  Chrissy did a great job with clearly conveying the “out of air” and “share air” signals.  I always stress to students its important to give a big, clear, precise signals so their dive buddy will understand what’s going on should there ever be an emergency.  After securing my alternate air source and breathing from it, Chrissy and I began our ascent to the surface.  We made sure to go nice and slow, watching each other and signaling “ok” as we ascended.  Once on the surface, Chrissy did a great job of getting positive buoyancy by blowing into the oral inflator.  Instantly we started talking about the really cool octopus, fish, and nudibranchs we’d seen.  Seeing an octopus is a pretty special experience in my opinion (you maybe see one every 10-15 dives), so Chrissy thought it was pretty cool she’d seen one on her second dive!  We finished off the dive with a weight check and then headed back to shore.

Chrissy did an awesome job on her first two dives and I am really looking forward to hitting the ocean with her again for dives 3&4!