Erika, William, and Megan were real troopers when it came to their Open Water Diver certification course. One of their pool sessions was interrupted by a malfunction in the chlorine system, their open water dives 1&2 were spent in the rough waters near Tengan Pier, and their course was delayed due to bad weather. When it came time to do open water dives 3&4 they were still enthusiastic about diving – that motivated me!

After multiple delays to our diving, we met up at Ark Dive to complete our Open Water Dives 3&4.  It was a bit nasty outside (drizzle, windy, and cloudy) but that didn’t stop any of us.  The water was fairly calm with only a little chop.

As we suited up, Erika show us the new scuba equipment she had just purchased – a Roxy wetsuit, a Zeagle Xena BCD, Tusa regulators, and a Mares Puck Air with Compass dive computer.  A few days prior, Erika and I had met up at the pool so she could try out her new equipment in a controlled environment.  I was excited when Erica took my up on the offer for the extra pool session – it’s always good to try out new gear in calm conditions.  After we verified that everything fit well and worked, she felt a lot more confident about using it all during our open water dives together.  Scuba diving is all about relaxing and enjoying the underwater world so I was glad to help Erika calm any concerns she might have had! 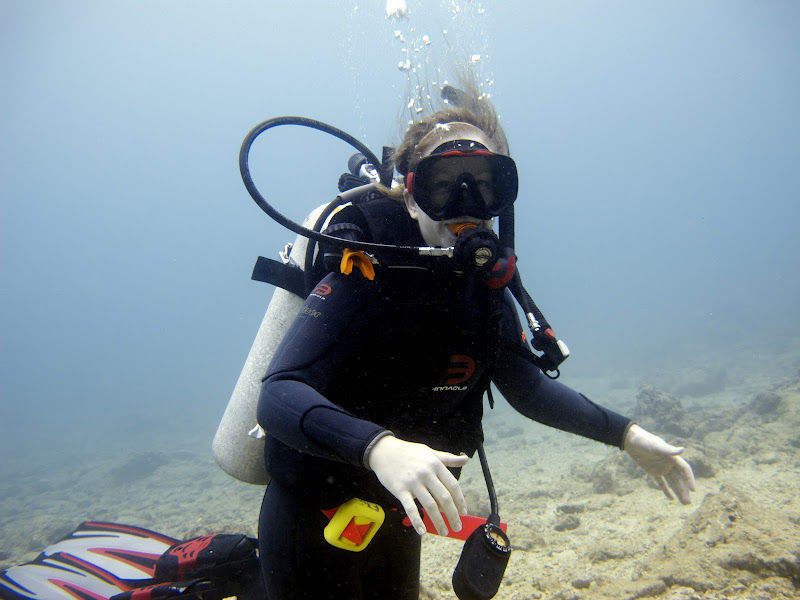 Megan Is All Smiles For The Camera

While making our entry, William noticed that his BCD wasn’t inflating.  Jason went over to take a look and saw that there was a tear in his low pressur inflator hose.  I didn’t want Jason’s certification to be delayed any further so it was agreed that he would go back to the shop to change out his equipment.  When he returned, I would finish his certification by doing an extra dive with him.  I love diving so I was excited to have another opportunity to go back under. 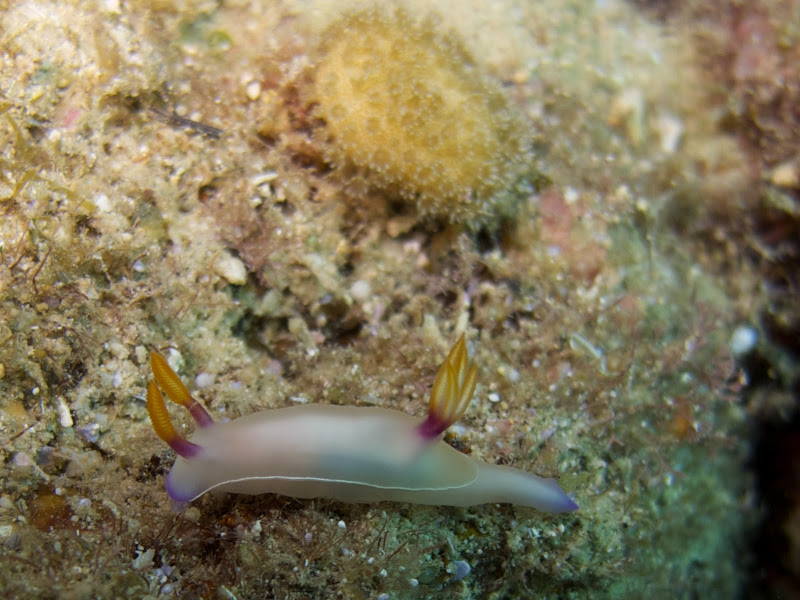 Jason, the divemaster candidate I work with, proved once again to be a great tour guide.  We saw multiple nudibranchs while swimming to the north.  The Hypselodoris bullocki nudibranch, uncommon to Okinawa, was really fun to photograph – the colors always come out so vibrant. 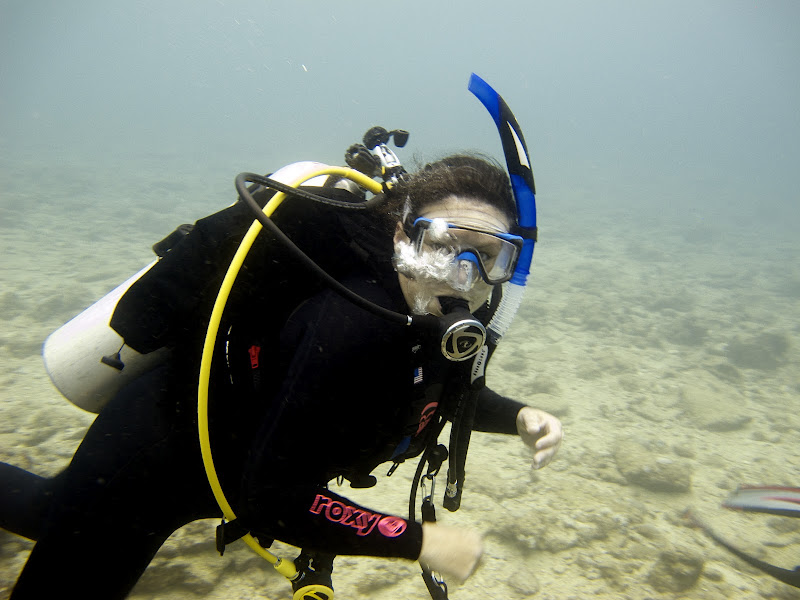 Erika Rocking Out Her New Gear! 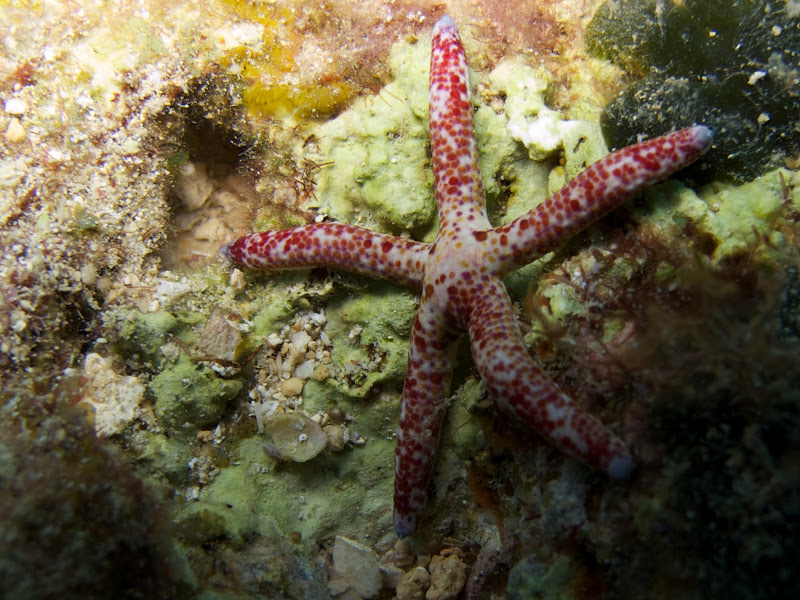 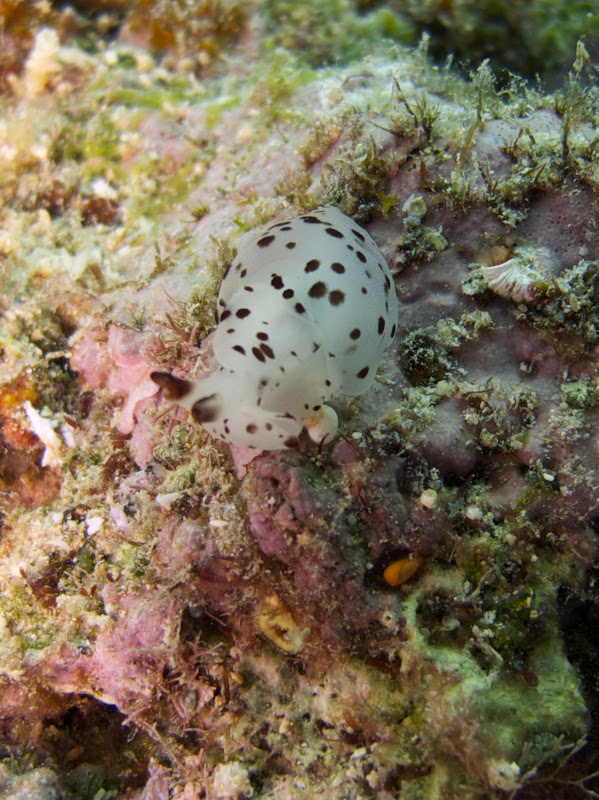 I spotted a very tiny nudibranch as we began our underwater exploration tour, and the only reason I spotted it was because it wasn’t the same color as its surroundings.  If it had been, I would have completely overlooked it.  Randy Birt helped identify this nudibranch as Berthella martensi.  It is highly variable in its coloration – ranging from yellow, white, and black – and it feeds primarily one sponges.  While reading about the Berthella martensi on The Slug Forum I found that it can discard its mantle (like a lizard loosing it’s tail to distract predators) should it feel threatened or come under attack.  There is supposed to be “a brown ring around the mantle which marks the fracture point along which the mantle breaks off.”  I don’t see the brown ring on the above nudibranch but it might due to the nudibranchs young age (this guy was ridiculously small). 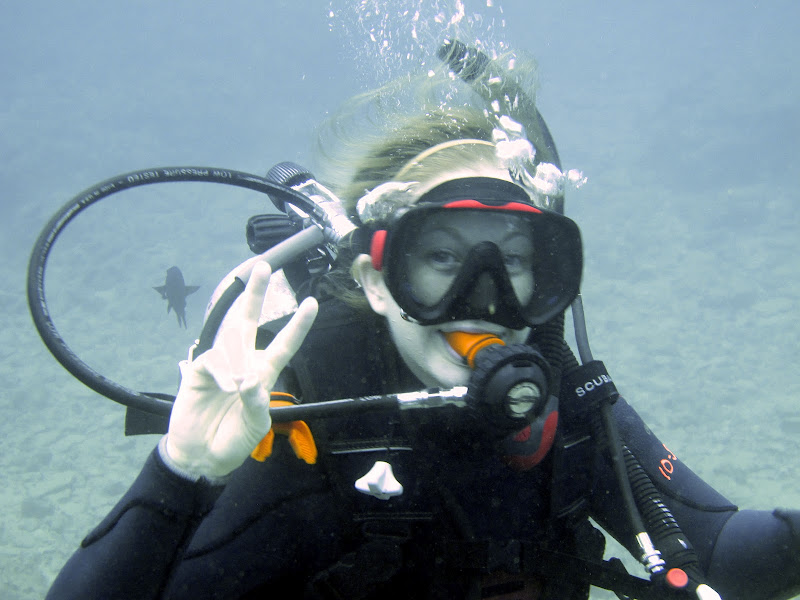 Sea snakes were out and about on our dives – we must have seen at least 5 or 6.  Megan isn’t a big fan of them (neither am I) so every time we spotted one, you could hear her screaming into her regulator.  During our first encounter with one, Megan reached over and grabbed hold of her dive buddy’s arm.  I was really impressed with the calm assurance that Erika provided to Megan.  She patted her arm, motioned that it was “OK” and to breath.  Talk about an awesome dive buddy, right?!  After our dive we discussed the whole episode and I congratulated both divers – Megan hadn’t bolted for the surface due to fright (that would have been very dangerous) and Erikaa’s cool, relaxed demeanor had helped calm Megan down.  We also began joking that Megan was our official alarm bell to alert us whenever a snake was in the area.  “Just listen for the screaming!”  hahaha 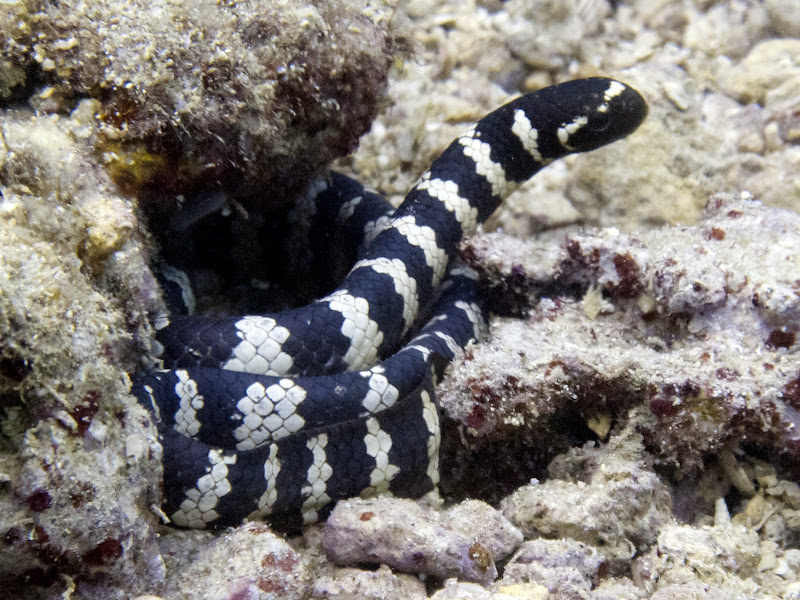 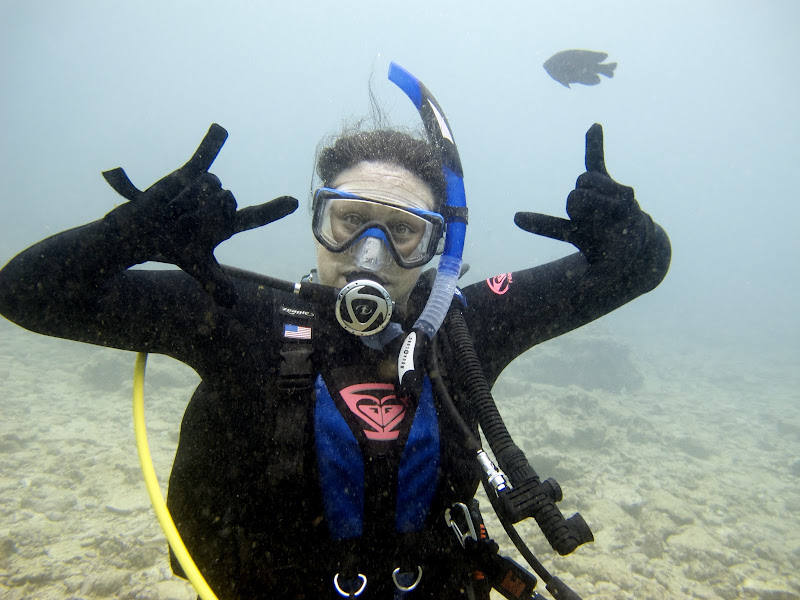 Erika Is A Hardcore Diver – Rocking It Out! 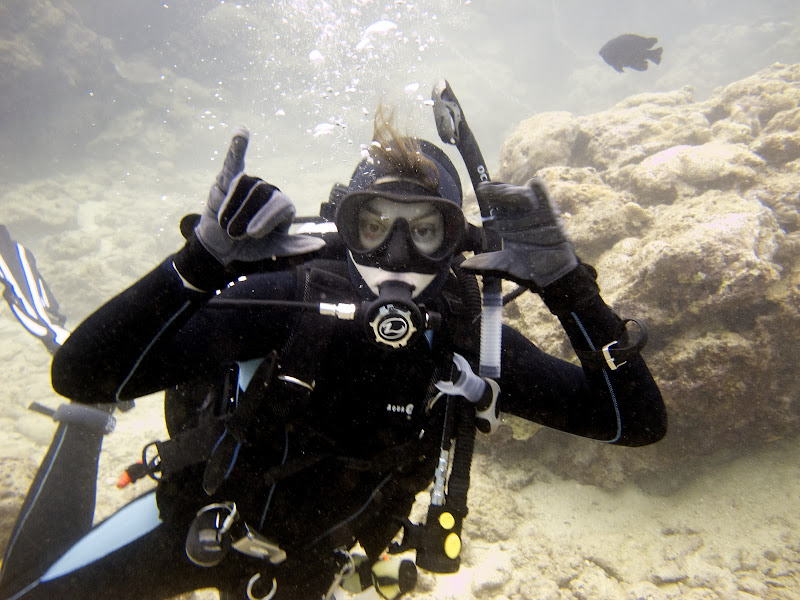 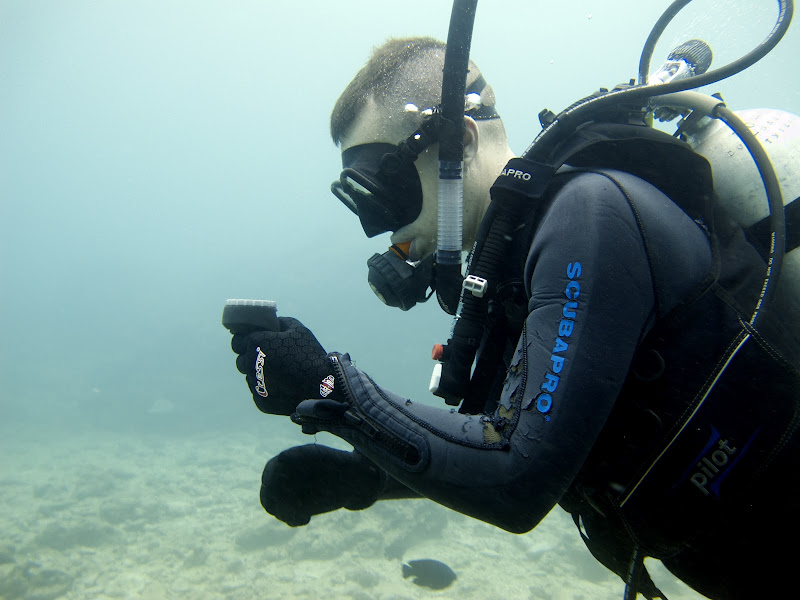 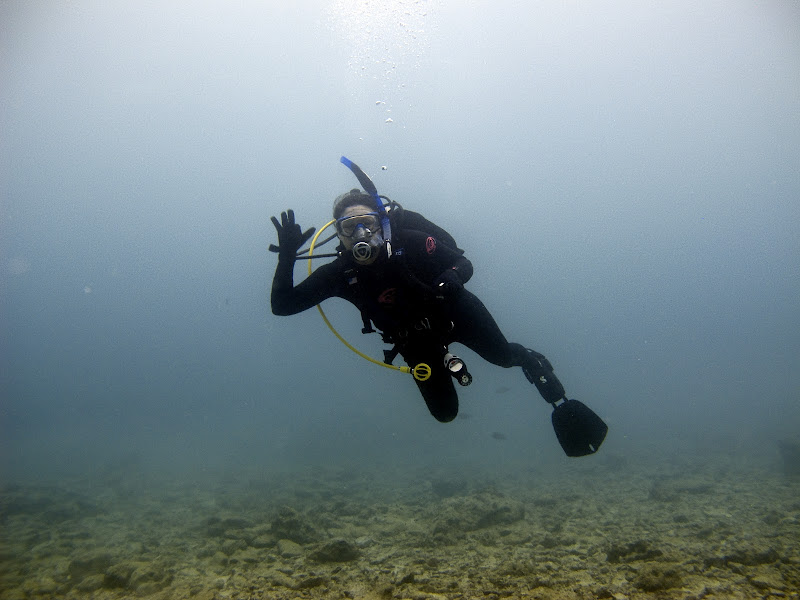 On the last dive for Megan and Erika, they completed their certification by demonstrating the ability to hover and remove, replace, and clear their mask.  Both sailed through the hover without any issues.  Erika had experienced difficulty with the mask drills in the pool so I was really impressed with the ease with which she performed them in the open water.  We had discussed different ways to prevent water from going up her nose and when she told me she loves to swim laps, it clicked!  I told her to try bending her neck so her nose would be pointing to the pool floor, then blow out through her nose when looking up so she could clear out the mask.  When she stopped blowing, quickly point her nose back down to the pool floor.  It worked perfectly and we solved the problem together.  I ended up videotaping Erika’s mask, removal, and replacement underwater so she could show all her friends what an awesome job she did in overcoming the challenge. 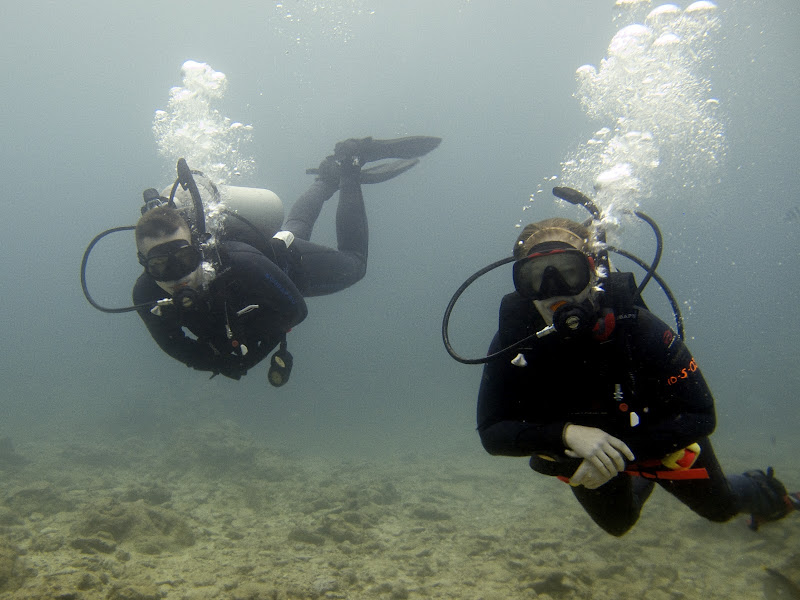 Megan And William Are Dive Buddies

Because I want people to get the most out of their training, I assign dive buddies so spouses don’t always stick together.  It helps them learn how to deal with others (married couples seem to have the ability to telepathically communicate underwater..yeah…it’s weird) and once they are certified, they will have plenty of opportunities to be each others dive buddy all they want.  On Megan’s final dive, though, I announced they could finally buddy up.  Hooray! 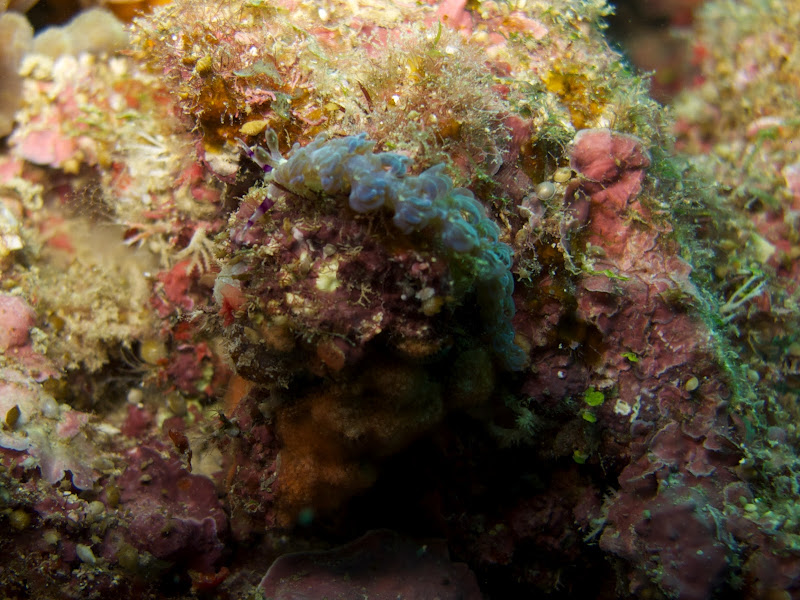 After cruising through their skills, it was back to another underwater exploration tour.  We first spotted a Pteraeolidia Ianthina Nudibranch, also called a Blue Dragon.  This was the first one I’ve ever spotted that was actually blue.  Imagine that?!  These have been popping up more frequently I’ve noticed…or maybe I am just better at spotting them. 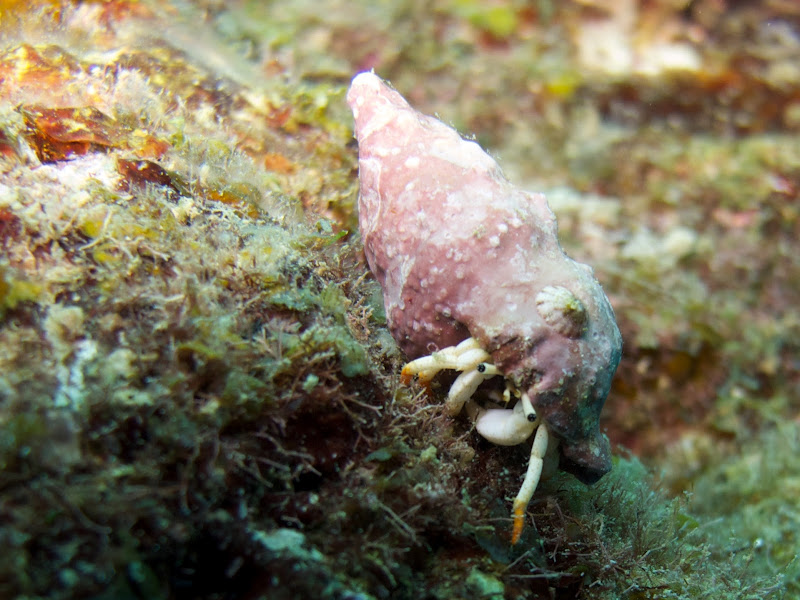 Near our turn-around point we also saw a tiny hermit crab resting on a ledge.  I approached with my camera and he didn’t back into his shell – talk about confidence!  Most of the time the hermit crabs get freaked out and hide as soon as you’ve spotted them.

On the way back to the entry we also spotted several different types of nudibranchs.  The first sighting involved two Sagaminopteron ornatum.  This type of nudibrach belongs to the Gastropteron genus – translated to “winged stomach”  – and when agitated it will fan out its parapodia (normally folded around it’s body) into wing-like structures similar to those on a manta ray.  It will then flap them up and down to float midwater.  There is a good illustration of the behavior found at the following link: http://www.seaslugforum.net/find/sagornat 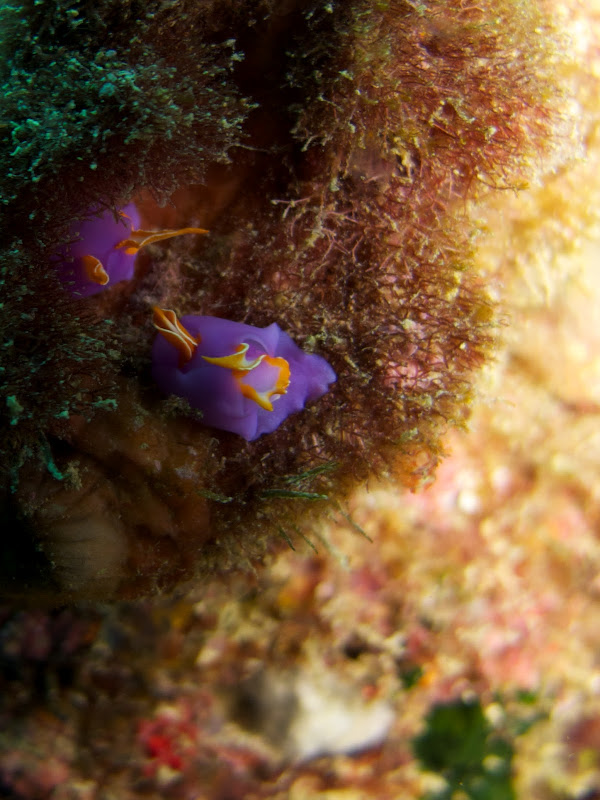 The other nudibranchs we spotted were a Fryeria picta and Tambja morosa.  The Phyllidia varicosa was under a ledge and wedged into a crevice.  The Tambja morosa was crawling across some rocks in between some plants, and  I had to reach down into them to get the photo. 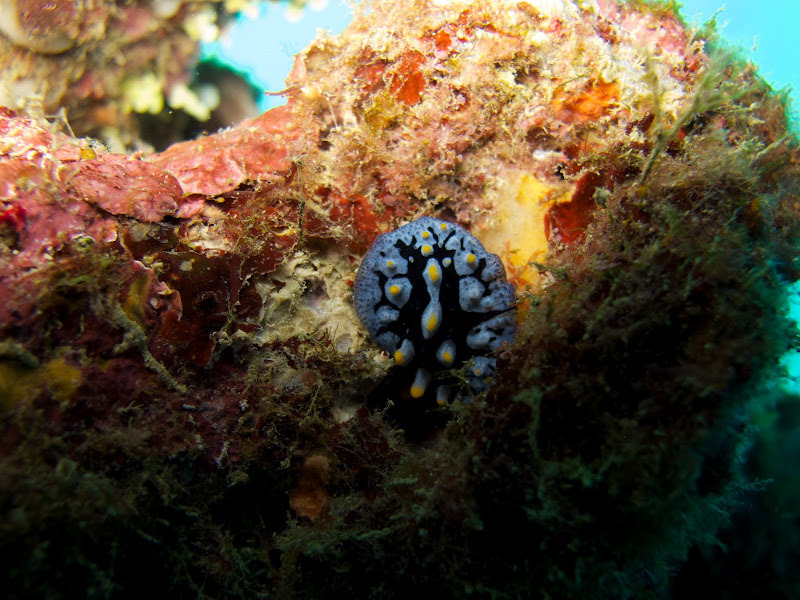 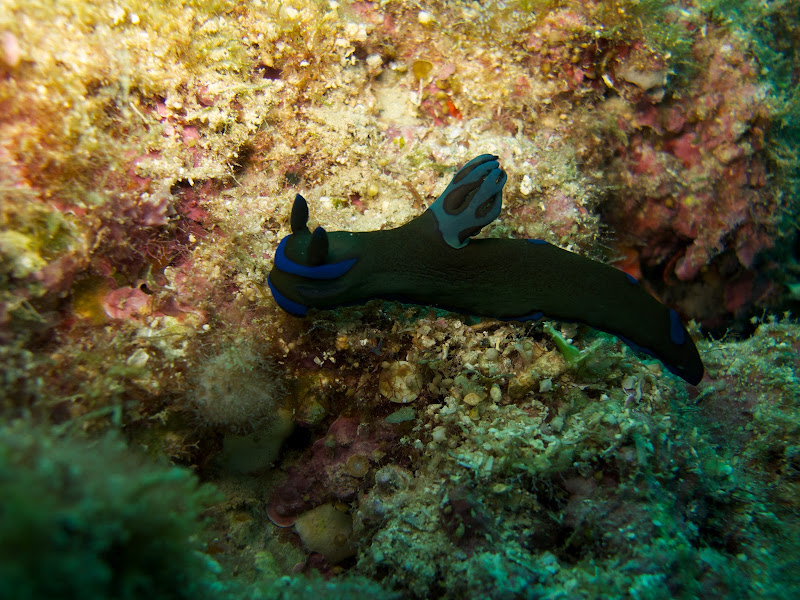 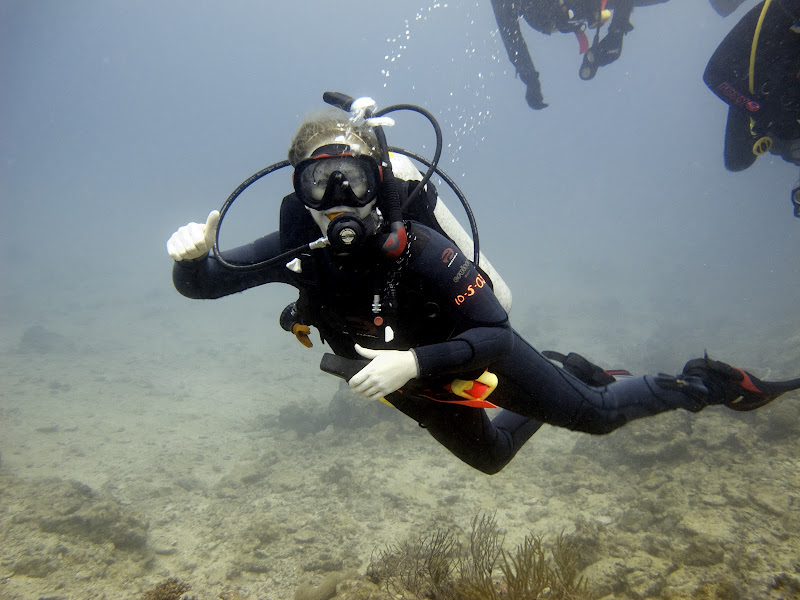 Megan Is Enjoying The Dive 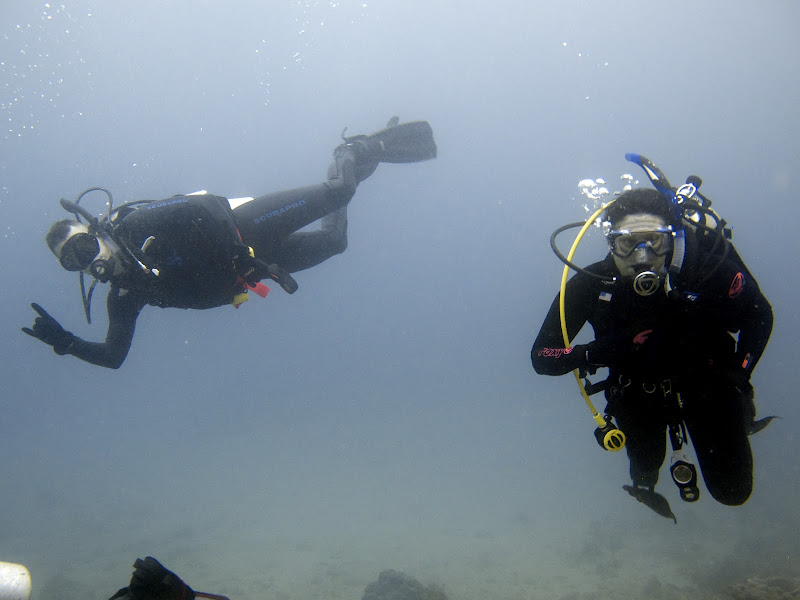 William and I made a surface interval and then headed back into the water while Erika and Megan chatted on shore.  William breezed through the skills and within minutes we were out exploring the reef.  The first thing we stopped to check out was a Chromodoris willani nudibranch.  I would have tried to take more photos but I knew once I started obsessing over the nudibranch, it would be hard to stop.  Thankfully, the one picture I took turned out pretty good. 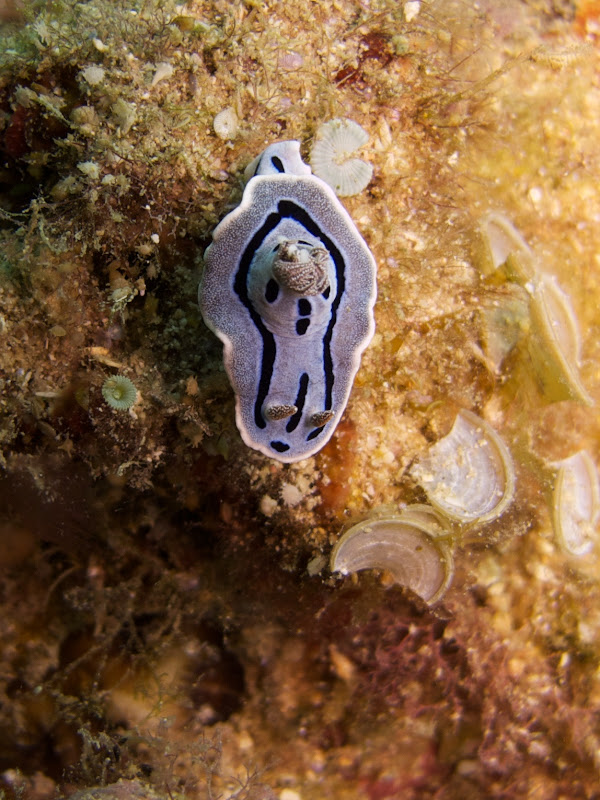 A little further into our dive, we spotted a Pteraeolidia Ianthina Nudibranch.  My past sightings of this type of nudibranch haven’t too spectacular, either the nudibranch has been a dull down or all the cerata (leafy appendages) are folded in around the body.  This one had a brillant blue color, the cerata were fanned out (so cool!), and was about 2.5 inches long.  I motioned to William to come over and we both got a good look before moving on. 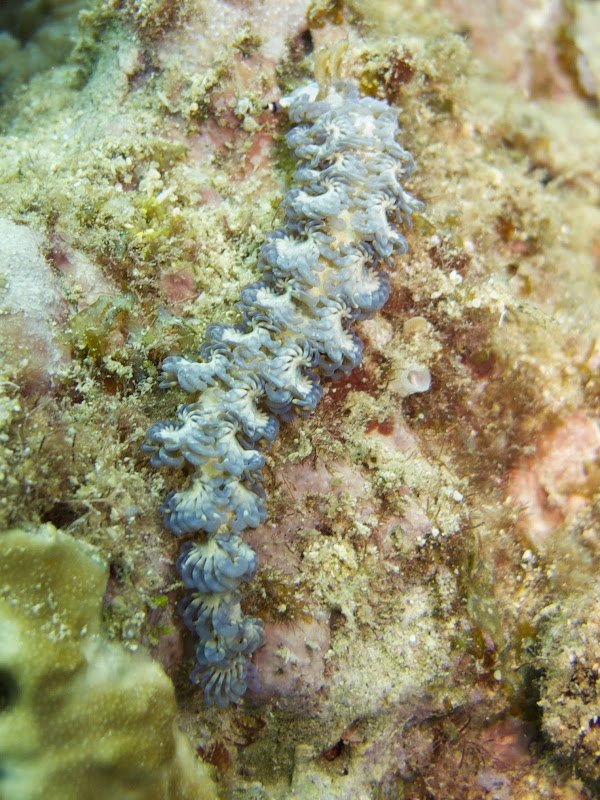 Heading back to the exit, we came across a nudibranch I had never seen before….it was a  Aldisa albatrossae.  I was excited to say the least.  It was perfectly positioned on the rocks for easy photographing —–   AAAAAAAA-MAZING!  I quickly took a few photos and pointed it out to William.  I saw the image previes of my photos so I knew I had some real winners.  I don’t know if he was as excited as me…probably not. 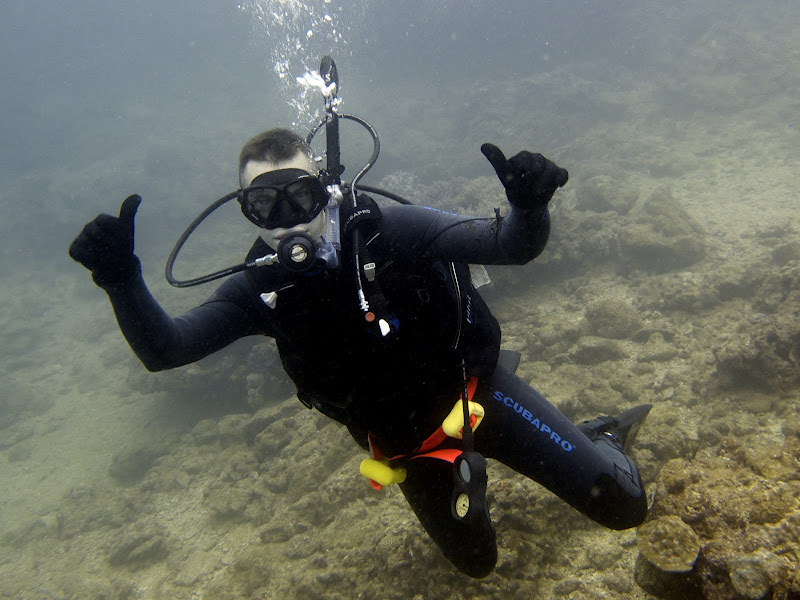 Thumbs Up For Being A Certified Open Water Diver!

Ascending into the shallows of Ark Dive, we kicked along the souther area of the classroom.  As we passed by the rocks, I noticed a scorpionfish nestled under a ledge and resting on the ocean floor.  He was perfectly camouflaged and when I pointed it out to William, it took a few seconds for him to see it.  I gestured to William not to touch it and then took a quick photo.  Once back at the chain, we made our safety stop and then kicked back into shore. 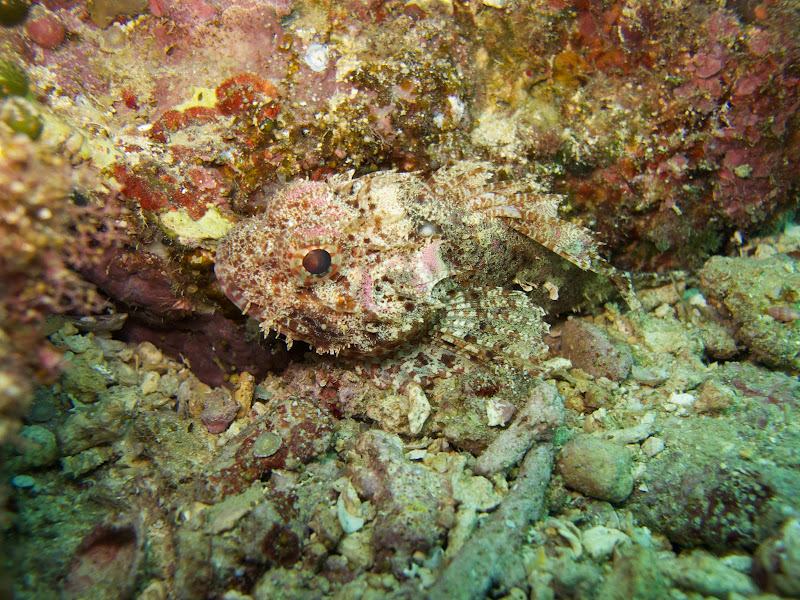 Diving with Erika, William, and Megan was great fun.  Everyone had an upbeat attitude, conquered their fears, and enjoyed the diving (even if there were too many snakes).  I’ve planned some club dives in the near future and I’m hoping they will be able to join me!  Great job Megan, William, and Erika!