Diving is great but sometimes it’s also fun to go out at night.  You end up seeing lots of different animals that simply don’t come out during the day.  Having dived Jam Marine during the day, I wanted to go see it at night.  Fellow divers had posted amazing pictures of flatworms and nudibranchs online – I wanted to go check them out for myself.  Thankfully, I found another diver who was also interested in going to Jam Marine.

After returning from a two week trip in the states to visit my family, I was eager to get back into the water and go diving…I also wanted to test out my new underwater housing case for my Canon G11.  I posted info about wanting to go diving several online forums, and I was pleasantly surprised when a woman named Deb got back to me saying she could meet with me.  We met on Tuesday evening at Jam Marine – it was high tide and the water was really calm – perfect!  We suited up and entered the water with high hope for what the dive would await.

As we descended, the first thing I noticed was that my new Canon WP-DC34 underwater housing case was extremely buoyant.  I also noticed that it was somewhat difficult for me to hold onto the housing because of it’s large size.   Because of the buoyancy and large case size, it made it difficult for me to hold onto case.  I might buy some weights to help make the camera less buoyant so it would be easier to handle…I plan to do a few more dives before committing to any purchases. 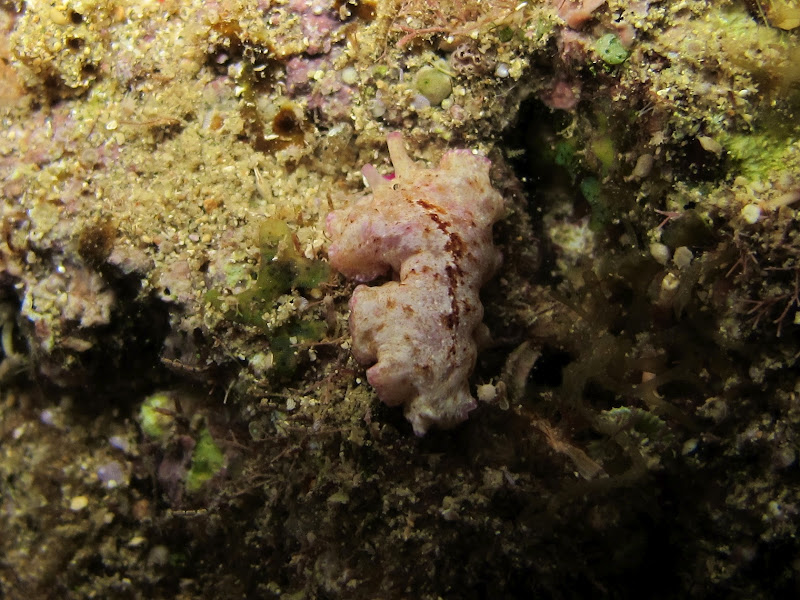 One of the first things we came across on the reef was what appeared to be a flatworm.  I’d never seen one like it before so I was excited to get pictures.  Because I was getting used to the new camera, I didn’t get very many good photos – only 2 of the 4 I took came out.  After returning home, I spent at least 40 minutes looking online and found nothing.  Hoping my fellow Okinawa divers might have an answer, I posted a picture of the unknown flatworm on a facebook group called K.O. D. Oki Divers.  Within an hour a gentleman named Jeff Monty helped ID it as a Pseudoceros goslineri flatworm.  Thank you very much Jeff! 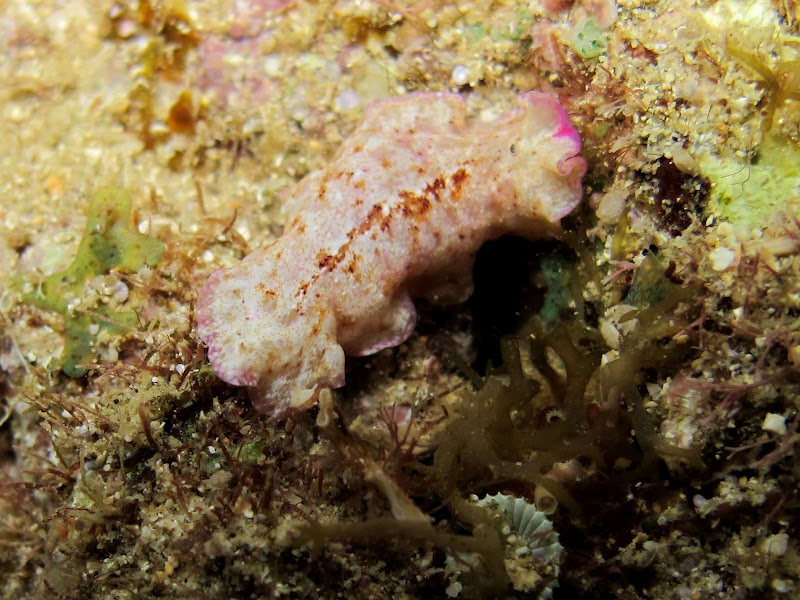 I looked online for a little more information about the Pseudoceros goslneri flatworm and found out that it mimics the Platydoris formosa nudibranch.  Why would a flatworm want to mimic a nudibranch?  Nudibranchs use aposematic coloration to warn predators of their toxic or distasteful defense mechanisms.  Basically, “I am brightly colored and you will have a bad day if you attack me!”  By taking on the appearance of a nudibranch, flatworms portray themselves as having the same defensive abilities of a nudibranch in an effort to increase their own chances of survival.  Pretty great design, right? 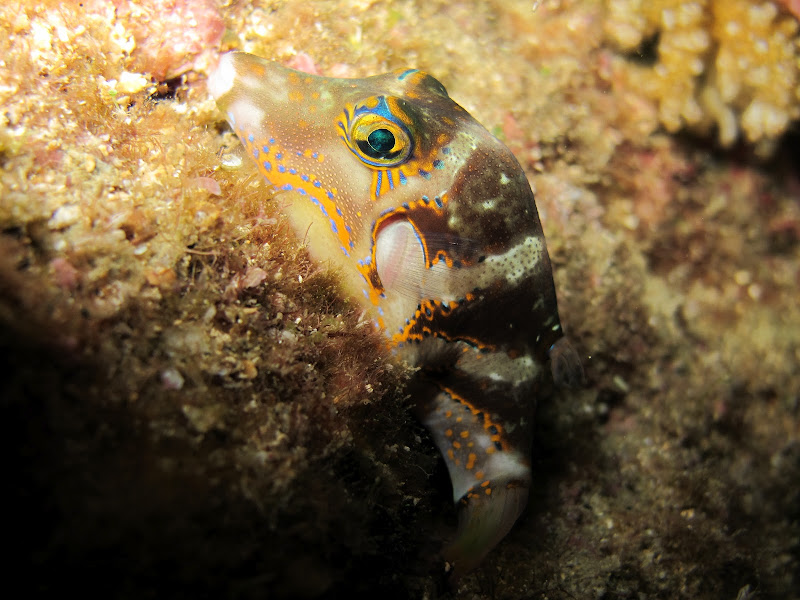 As we came over a rock mound, I spotted a crown toby perched on a ledge.  During the daytime, these fish are very suspect of people and will quickly swim away when approached.  During this encounter, the crown toby didn’t even flinch when I shined my light in his direction.  Seeing that he wasn’t moving away, I positioned my camera about 6 inches away and snapped a few pictures with the flash going off.  He still didn’t move.  Being the curious person I am, I looked online for more information about whether or not fish sleep.  The answer I came to was “yes” and “no.”  Similar to humans, fish have periods of rest; however, unlike humans they don’t enter into periods of unconsciousness where they are completely unaware of their surroundings.  Fish that are resting will be “awoken” when they experience some sort of external stimuli.  I guess the crown toby that Deb and I spotted was really zonked because my flash didn’t even wake him up. 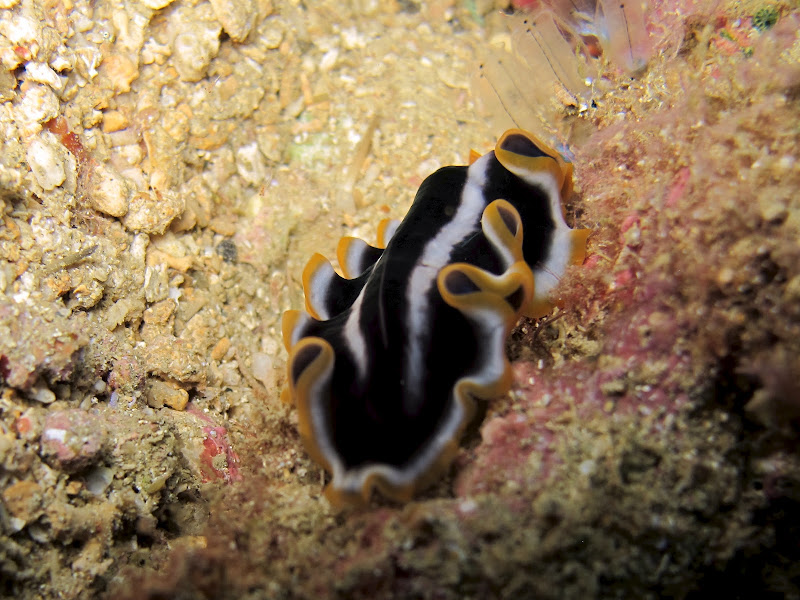 Just before turning around, I noticed another flatworm crawling along a ledge.  I came into a hover directly about it and took a few pictures.  Because I am still trying to figure out my camera, only a single photo turned out as I wanted.  Once again, I went to the internet in hopes of helping me identify the flatworm I had come across.  It took some time but I finally came to the conclusion that I had spotted a Pseudobiceros sp flatworm. 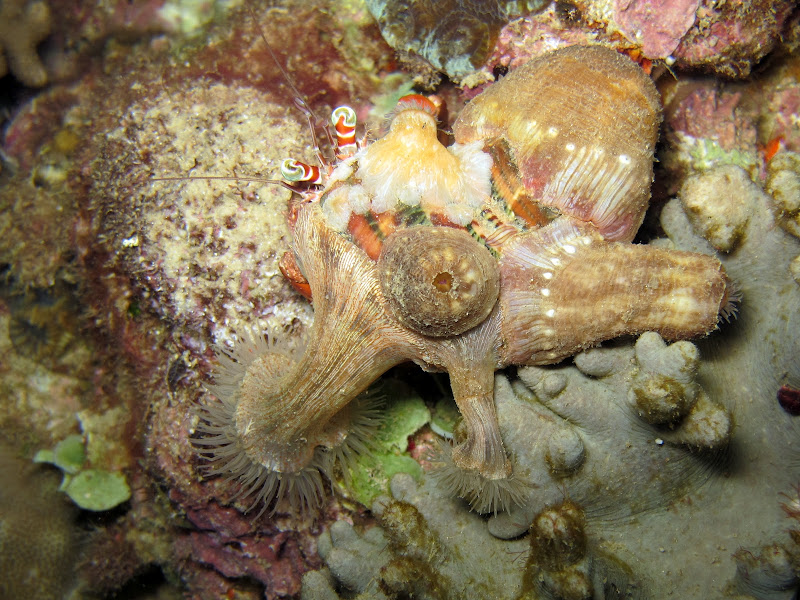 While heading back to the exit, Deb spotted a really awesome hermit crab with tube worms growing on its back.  Whenever I’ve tried photographing these in the past, the tube worms retract and it makes for a very uninteresting picture.  This time it was a little different – the ones on the top of the shell retracted while the other remained open.  These creatures creep me out a bit, but I’m not really sure why…maybe it has to do with the fact that I think they’re really ugly. 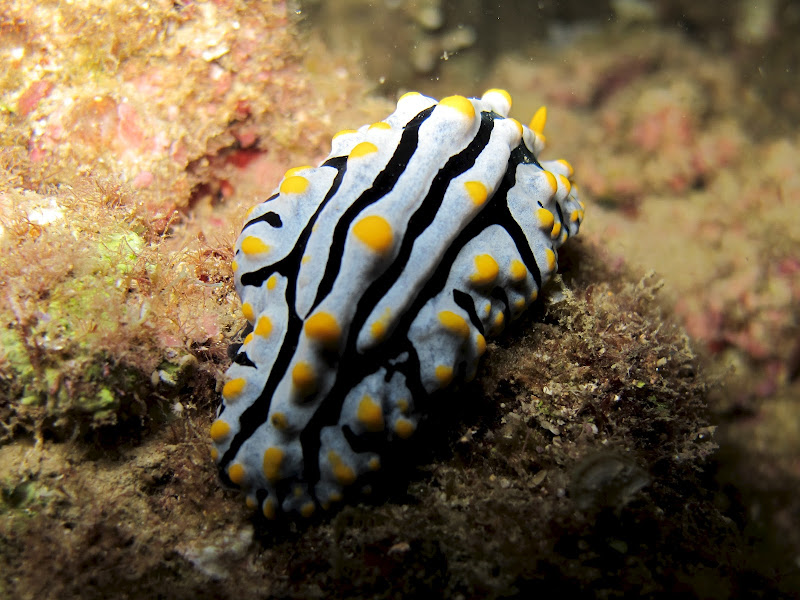 With less than 5 minutes left in our dive, I spotted one more flatworm which I’d never seen before.  I am currently still working to identify the flatworm (seen below) so if you happen to know what it might be, please let me know.  It looks a bit like a Pseudobiceros sp. #2, minus the splotches. 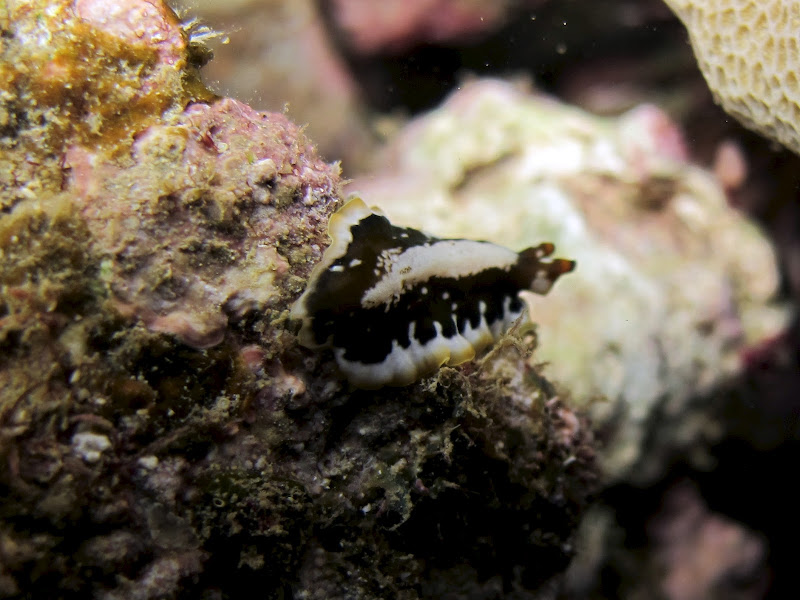 Right before making our exit, I spotted a Chromodoris colemani nudibranch perched on top of a rock.  The distinguishing features of this nudibranch are it’s orange/orange-brown stripes sandwiched between black stripes on it’s back.  It also has a thick orange ring around its lower body.  Because we were running a bit low on air, I didn’t take much time to get my camera set up.  I ended up taking a picture of the backside of the nudibranch but it actually turned out really well….there was lots of detail of its branchial plumes.  I actually really like the photo. 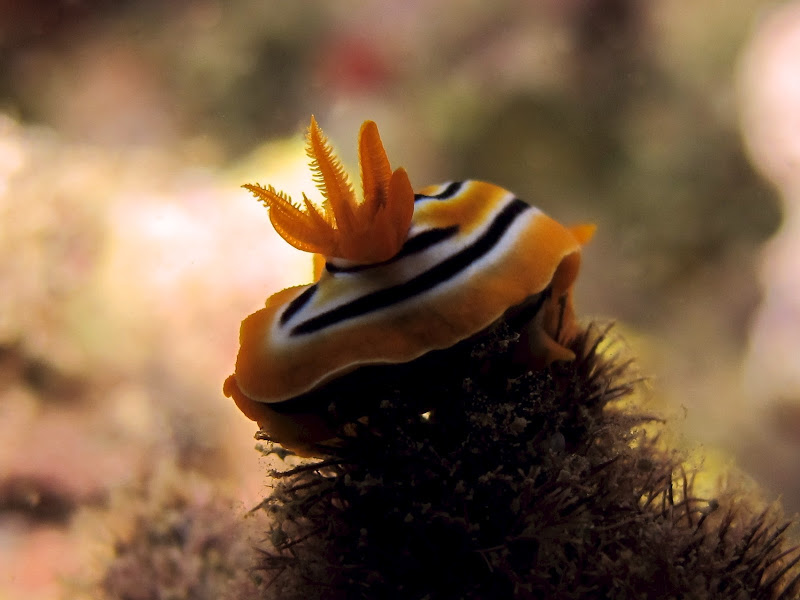 Night diving at Jam Marine with Deb was great.  We had a really nice, long, relaxing dive…and we saw some neat things too (always a bonus)!  We’ve agreed to meet up again in a few weeks when my work schedule lessens to go on some more night dives at Jam Marine or other easy entry locations.