After yesterday’s dive being so awesome, Jason and I decided to head back to Maeda Point again.  This time we were joined by Eric and his friend.  The highlights of our dive included an octopus, several types of scorpionfish and anemonefish, beautiful coral, and a cuttlefish.

After our diving the previous day, I was looking forward to returning to Maeda Point for another two dives.  After meeting up, Jason and I decided that our our dive objective would be photography of fish so our max depth was planned for nothing deeper than 40 feet quickly.  It was also agreed that we we would head southward to avoid the numerous snorkelers and boats scattered among the northern section of the small cove area. 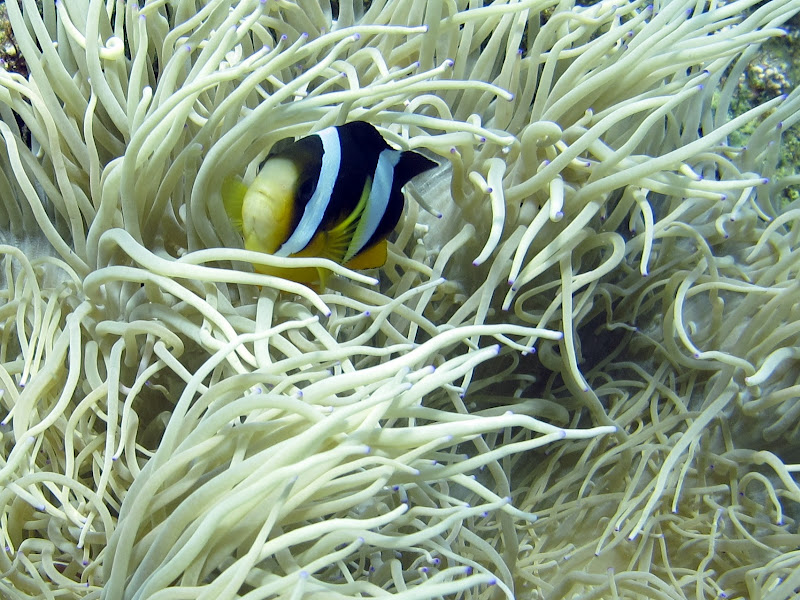 One of the first types of fish I came across were two Clark’s Anemonefish swimming around in some anemone.  One looked to be fully grown but the other was about very tiny, and it was also very shy.  Whenever my camera would get into position to take a nice photo, the little one would dark into or behind the anemone.  I ended up focusing on the larger of the two because of this.  In my opinion, Clark’s Anemonefish tend to be some of the most aggressive fish I’ve encountered underwater.   They can become very agitated if you violate their “personal space” and I’ve had them nip at my camera and my hands (thankfully I was wearing gloves).  Of course their attempts to deter me from getting close were completely useless – I actually found them to be quite hilarious because they were so small and  yet so determined.  The two clark’s anemonefish I encountered here though were very passive so taking pictures wasn’t very hard. 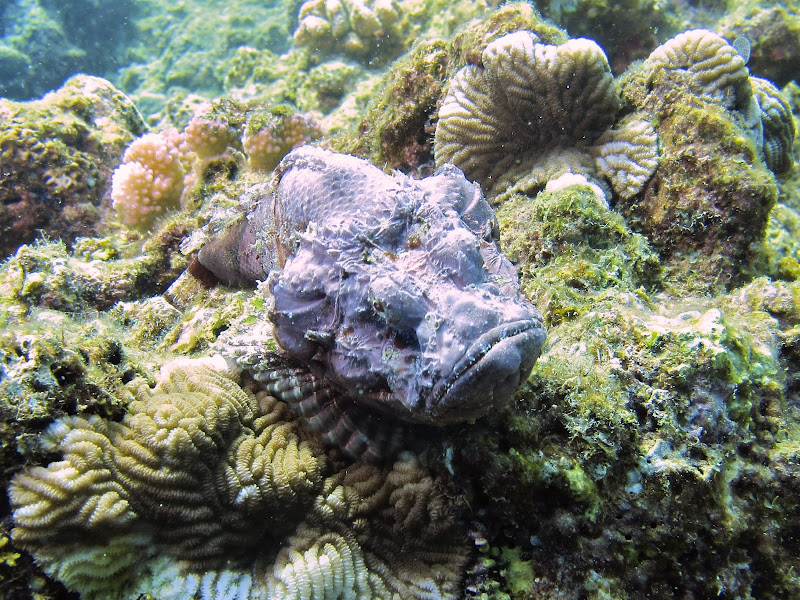 As I kicked over the reef I noticed something beneath me that was big and purple slowly crawling across the coral.  I turned around to get a better look – I was pretty sure it was some sort of scorpionfish was I couldn’t be sure.   Even though the fish was purple, it actually blended into it’s surroundings very well; it was only its movement that tipped me off to its location.  I managed to take a few head-on shots and then the mysterious fish began coming towards me.  It used its pectoral fins to low-crawl across the coral until it came to rest in a small divot.  It nestled itself into position nicely and I suspect it preparing to prey on unsuspecting fish who were passing through the area.  When I returned home I was able to identify the purple fish as a devil scorpionfish. 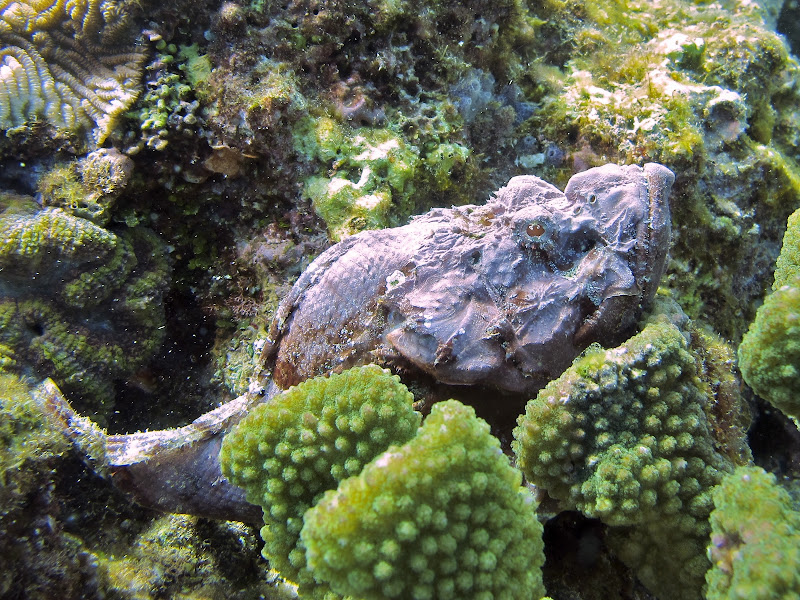 Devil Scorpionfish In Divot- Note The Pronounced Hump On Its Back 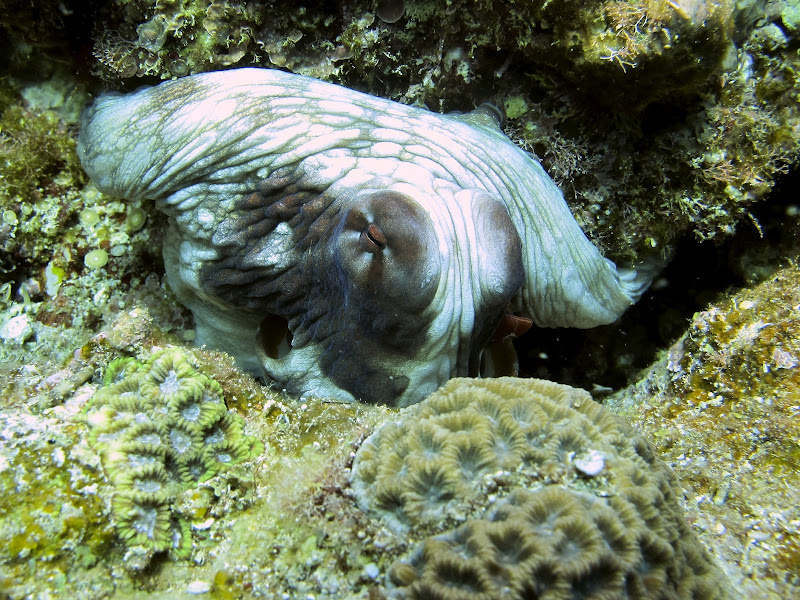 After taking a few pictures of the devil scorpionfish I noticed that I was getting a little separated from the group so I kicked back up to meet with them.  Just as I was about 10 feet behind and above Jason, an octopus popped out from the rocks in front of me and started swimming away.  Sweet!  It quickly ducked into a crevice and left about half its body exposed – making sure to keep an eye on me.  After taking about 15 photos, I swam over to where Jason was photographing an object to let him know I had found something really good.  He came up and signaled “OK” to me after seeing the octopus and also took a few pictures. 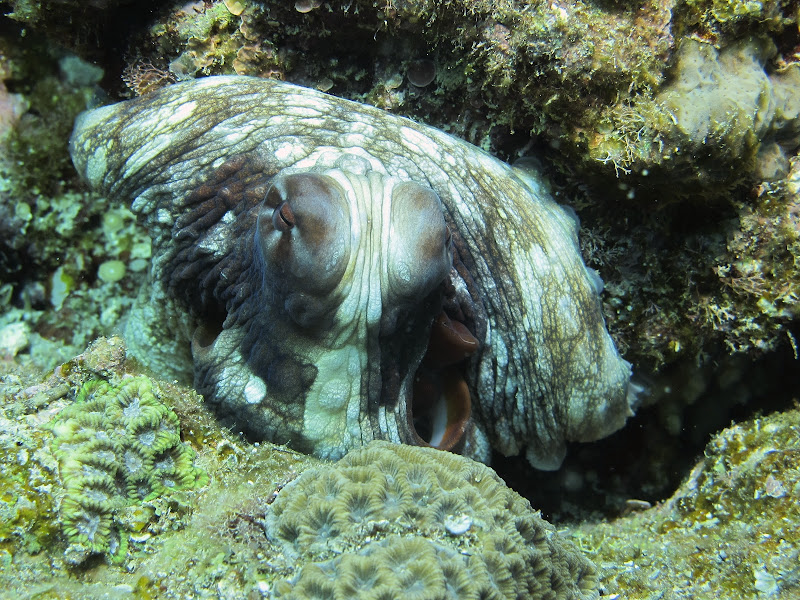 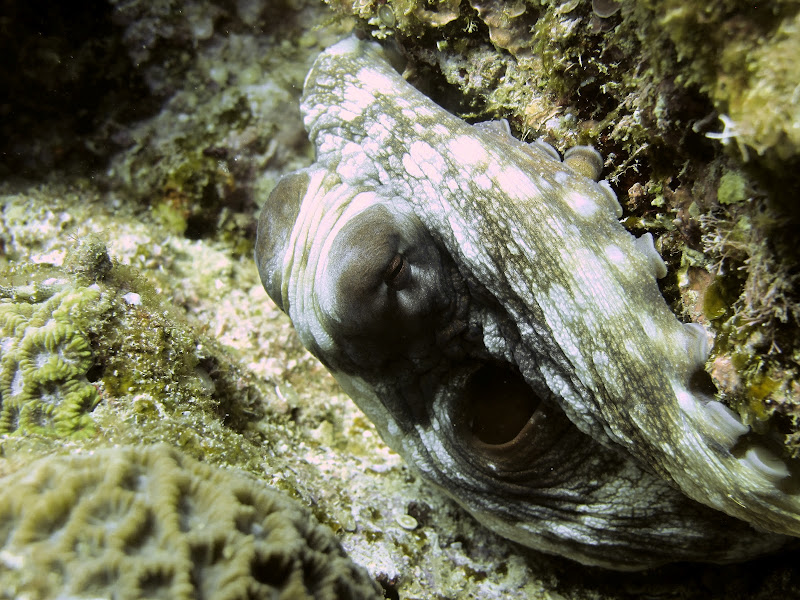 After taking about 15 photos, I swam over to where Jason was photographing an object to let him know I had found something really good.  He came up and signaled “OK” to me after seeing the octopus and also took a few pictures.  Jason then swam on to see what was ahead while I continued obsessing over the octopus.  I wanted him to come out of the rocks so I swam behind a small boulder to where I was out of view and waited a few seconds.  The octopus slowly emerged and I came out from behind the boulder hoping to get a better shot.  With my camera zoomed in I was able to snap 1 decent picture before the octopus saw me and retracted back into his crevice.  Octopus aren’t easily fooled, that’s for sure! 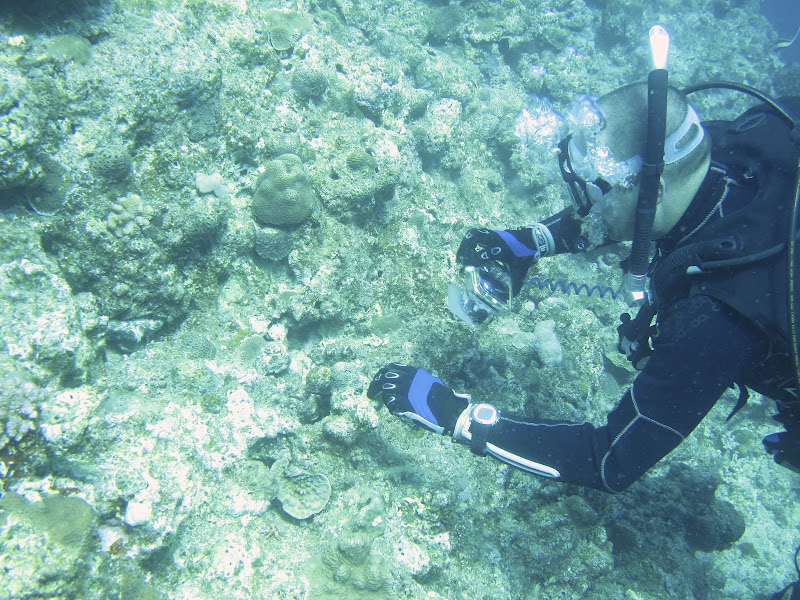 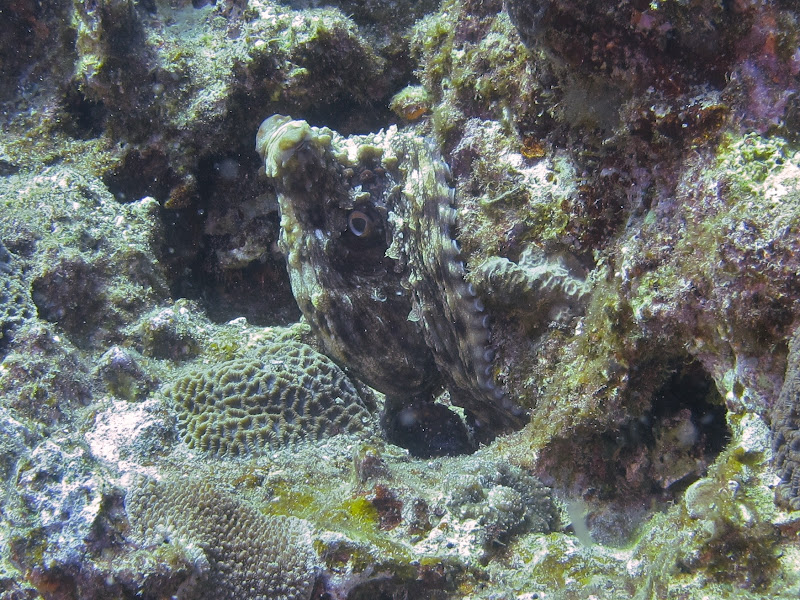 Octopus Emerging As I Retreated

As we kicked along the reef wall at 30 feet, I cam upon some clark’s anemonefish.  These two were a bit more wary of me than the one I’d seen previously.  They darted back and forth and it always seem like they timed their movement right as I was about to take a picture.  I did a little research and found out that all anemonefish are born male.  t’s only when they start to age do some of them become females.  Pretty weird, right?!  Another interesting fact I learned was that anemonefish aren’t completely resistant to the stings from the tentacles of an anemone.  Before it can totally emerse itself in an anemone, the fish lets the tentacles touch it ever so lightly so it can build up a protective mucus layer.  This could take anywhere from a few hours to several days.  Once the mucus is thick enough to fully protect the anemonefish, it will then swim around without being harmed. 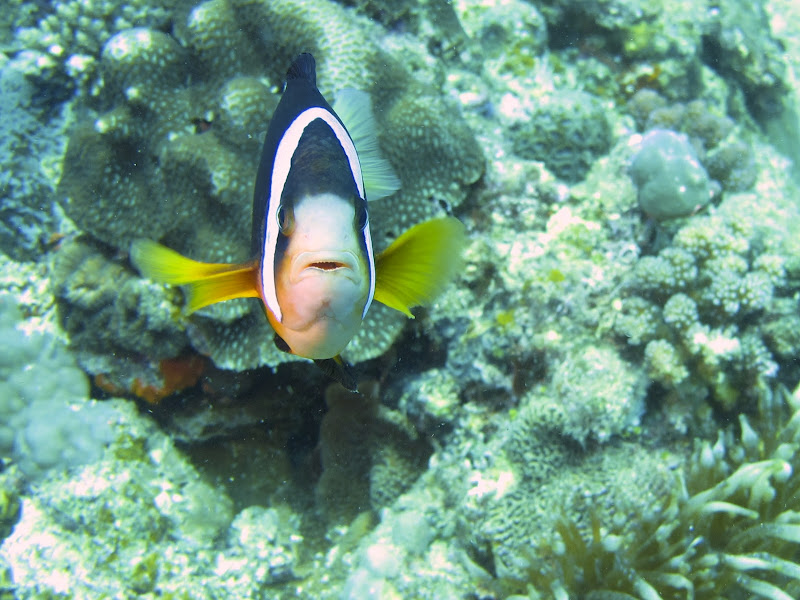 After kicking past the clark’s anemonefish, I positioned myself at a depth of about 35 feet while Jason was a little deeper than me…probably around 40 feet.  We kicked parallel to each other so we could scope out my interesting sites, as compared to one person following directly behind the other.  To our luck we came acros two tasseled scorpionfish.  One appeared to be half the size of a mature tasseled fish and the other was fully grown.  I motioned for Jason to come take a look and we both started taking pictures.  Because of the lighting and the positioning of both fish, I wasn’t able to get a very good photo with the two of them. 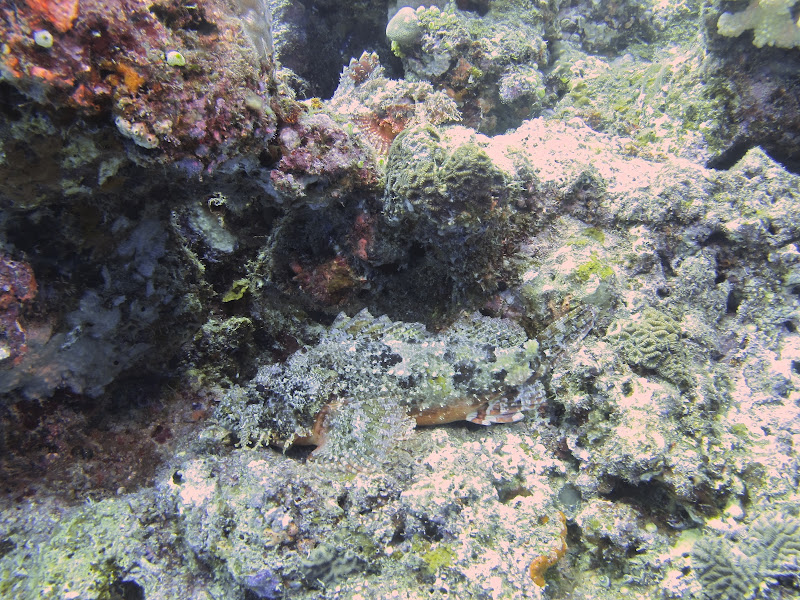 Two Tasseled Scorpionfish – Can You Find Them?! 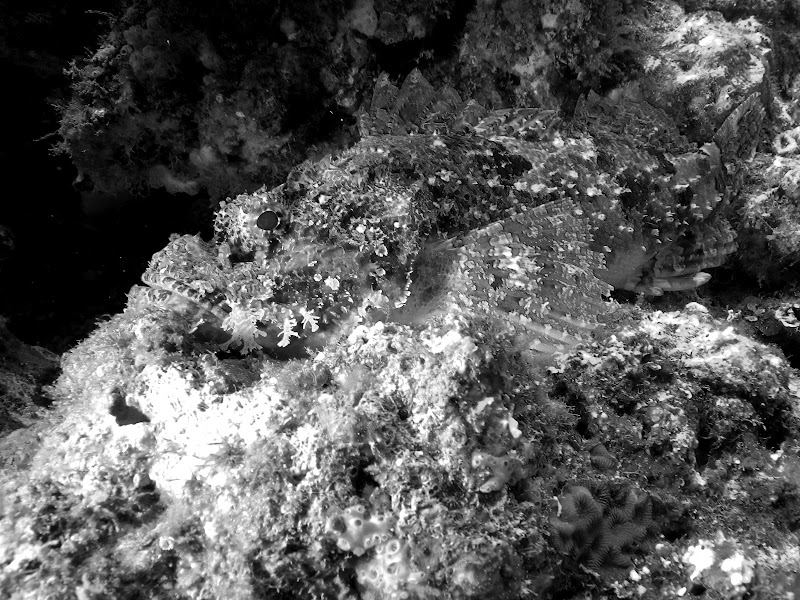 Deciding that it would be better to individually photograph the tasseled scorpionfish I approached the larger of the two first.  He stayed really still and I took a few nice photos.  Then it was up to look at the smaller one.  My camera did a good job of capturing the wide variety of colors it was displaying.  Scorpionfish are pretty fun to photograph because they remain relatively stationary, they look very different from your “average fish,” and  they have really great colors.  I showed a picture of a scorpionfish to my parents a few weeks back and they initially didn’t see it because it was camouflaged so well against a rock.  When I finally traced the outline for them they were stunned. 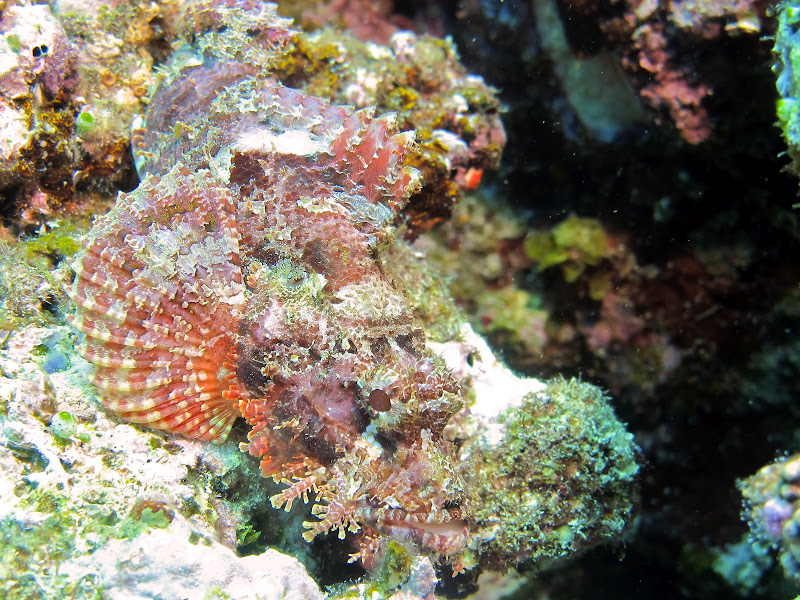 Right before we hit our halfway mark the dive, I came across a Yaeyama Blenny (what a fun name, right?).  He was resting on a round head of coral and I slowly came into a hover above him.  Looking down I started snapping pictures.  Several times my flash went off, and this little guy would dart to a new spot.  When looking through my pictures at home, I noticed that the yaeyama blenny had a blurred body in several photos and figured out that these blurred images were the ones taken when he darted around.  I find it pretty amazing that his reflexes were so sharp and he could move so fast that my camera wasn’t able to get a picture that was in focus of him when the flash went off. 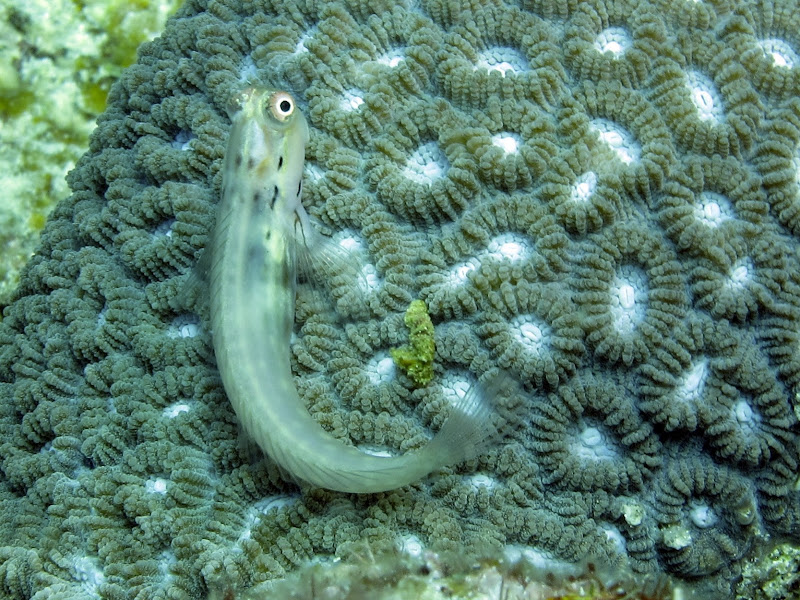 Yaeyama Blenny – Note The Two Dark-Lines Behind Its Eye 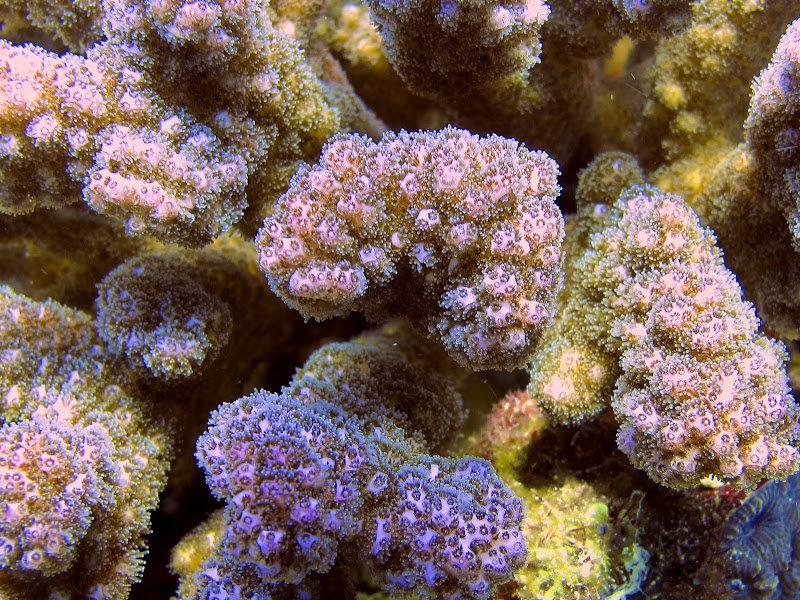 About a minute prior to turning around at our halfway point, I spotted a few dwarf hawksbill fish perched along some sunken rope.  I carefully approached but a few swam off.  This fish don’t really like it when you get to close.  I zoomed my camer in and managed to get one or two deccent pictures of the one fish who had enough courage to stick around. 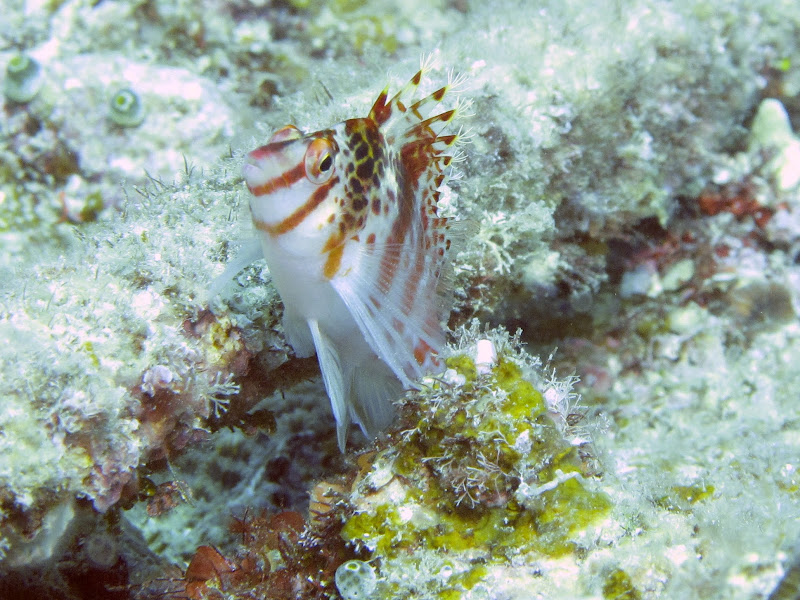 Dwarf Hawkfish – Note The Pair Of Reddish Bars Below Its Eye

As I was focusing on the minute details of the reef, Jason was doing a great job of scanning a larger area.  I hear him use his tank banger to get my attention.  When I looked up he was pointing towards a cuttlefish about 10 feet away from him.  It was probably 14-18 inches long – not nearly as big as some others I’ve seen.  Nevertheless, the cuttlefish did a good job putting on a show of changing his colors.  We tried to get a bit closer to him to get some nice photos but he kept his distance from us.  Not wanting to scare him away, I zoomed in and had time to take two pictures.  On the second photo, my flash went off and the cuttlefish started swimming away.  Whoops. 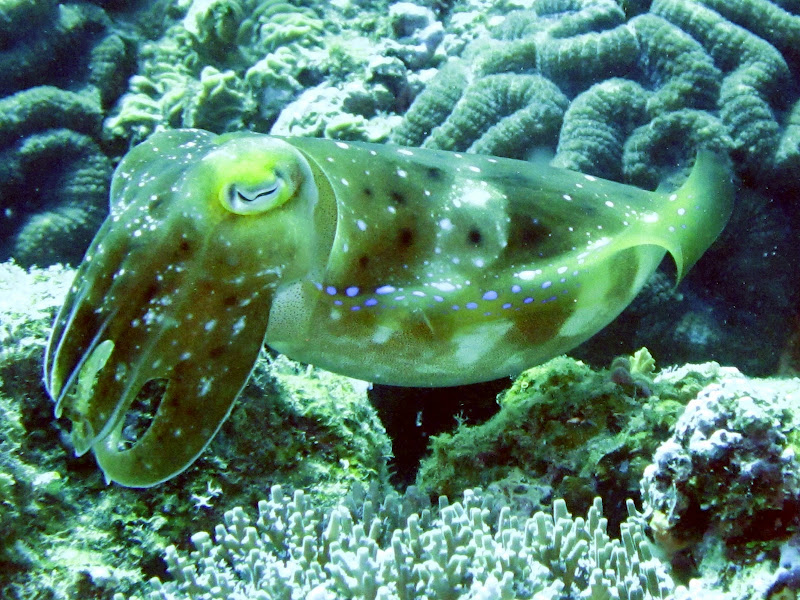 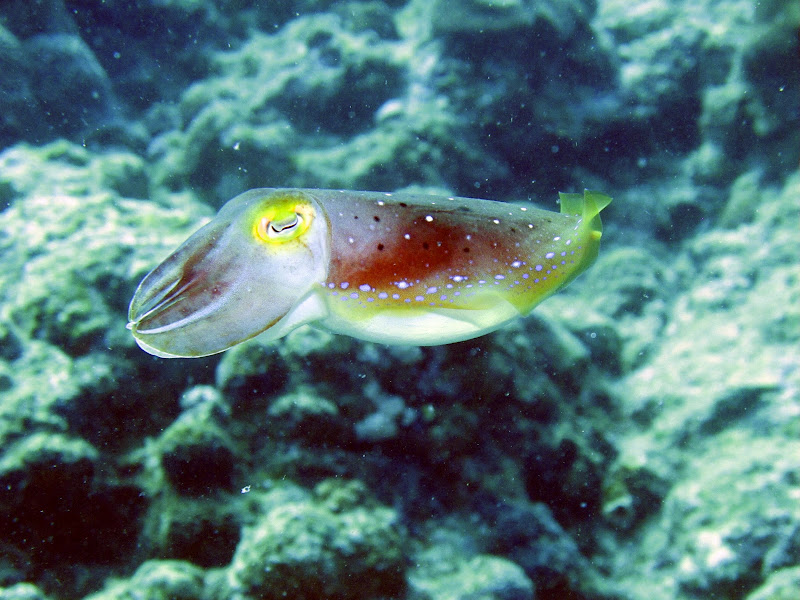 As we returned to the entry point, I continued to focus my attention on taking pictures of fish.  I saw a female tomato fish swimming in some anemone and nabbed a quick photo.  I just learned that the females tend to be bigger than the males (yeah ladies!)…but I’m guessing that it probably has to do with hatching eggs.  An easy way to differentiate between a male and female tomato anemonefish is to look at the coloration.  The sides of a female have a blackish tinge in comparison to its face and underside are reddy-orange.  Males lack any black markings and are much brighter orange – almost neon. 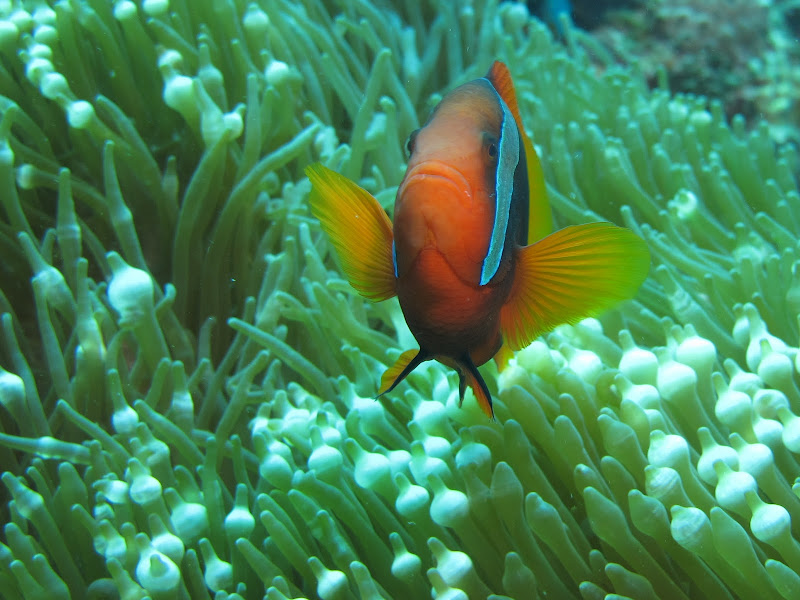 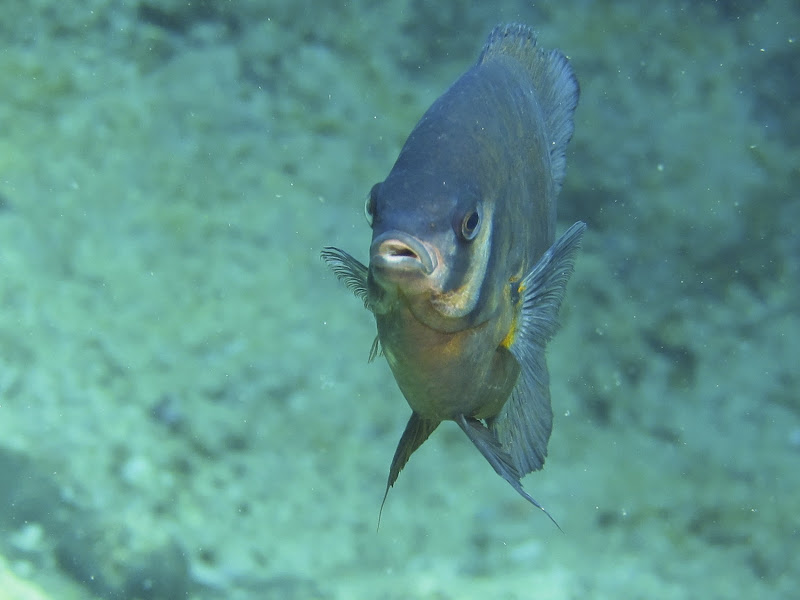 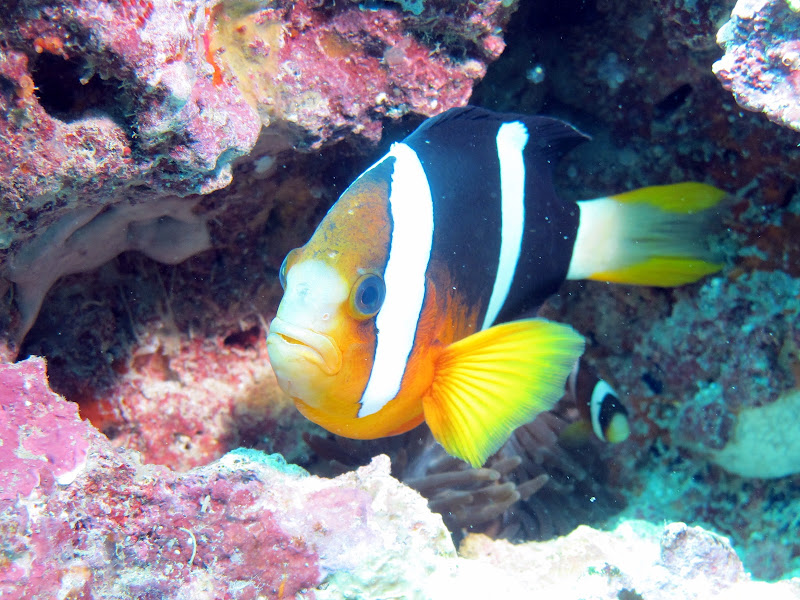 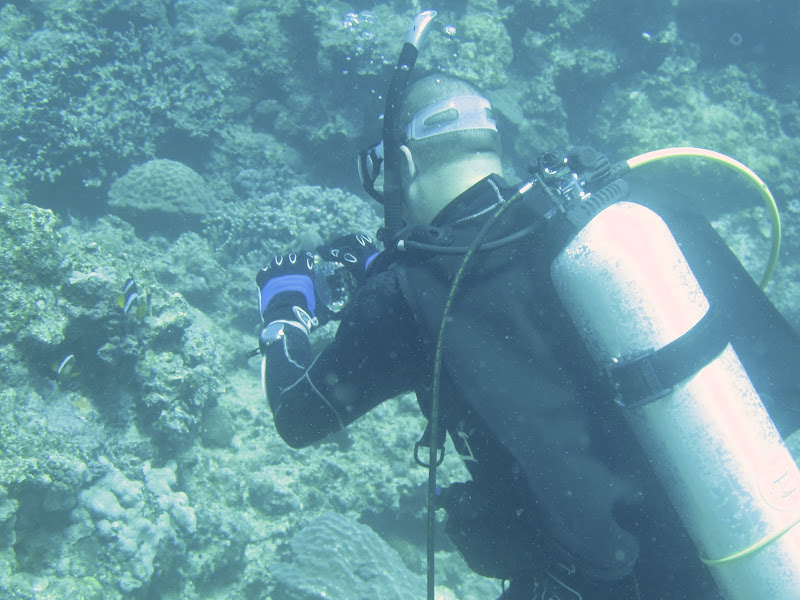 As we made our safety stop I noticed a largemouth triplefin nestled into the rocks.  These fish are pretty cool because their body is nearly translucent. minus the red and white dots, so they can blend it well.  They can be skittish but if you mouth slowly enough and don’t get too close, they will stick around for photos.  The one I was looking at was on the underside of a little ledge so I carefully moved my strobe into the best position I could and then slowly approached.  His eyes were big and he wasn’t taking them off of me.  Two photo later and he peaced out on me.  I guess the strobe and my big hunking camera was just too much for him to handle.  To much pressure! 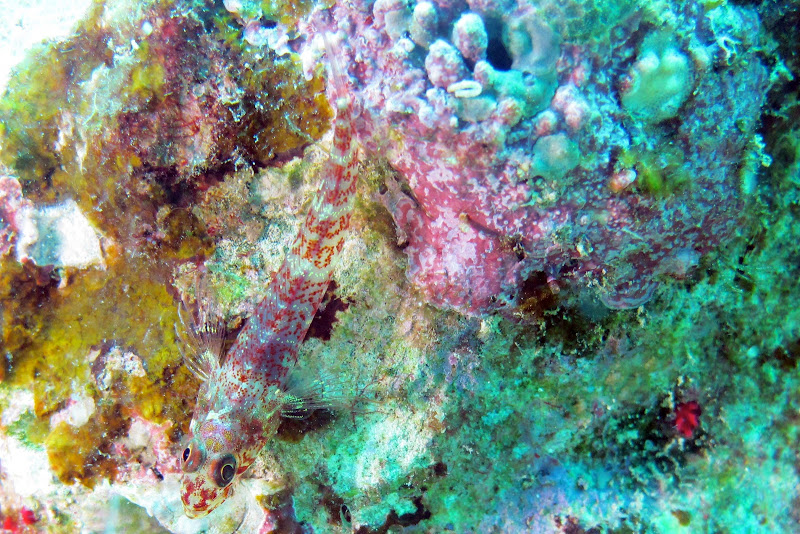 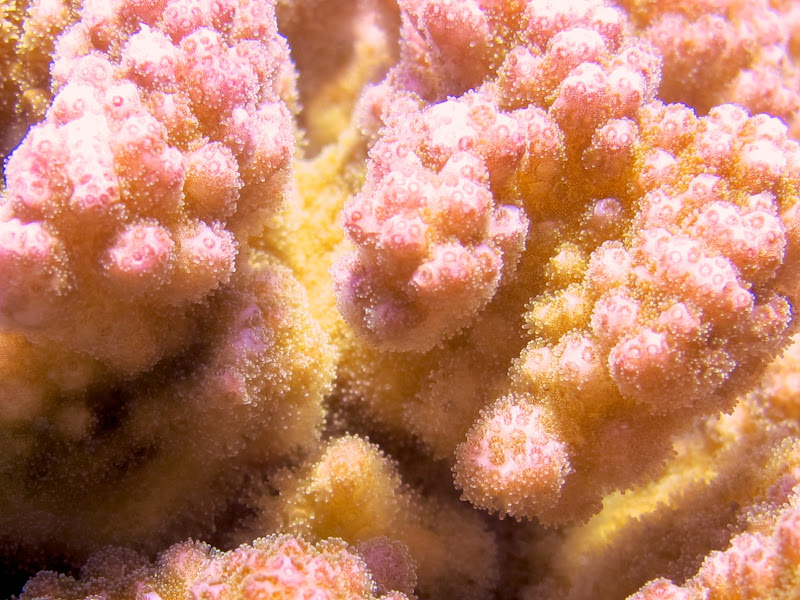 As we exited the water, Jason and I discussed what our next dive plan should entail.  We decided to head the other direction and see what else we could find.  As we swapped out our tanks and did our surface interval, we were both excited to get back into the water.  The conditions were still looking good and there weren’t very many snorkelers in the area we were looking to go