Since returning to Okinawa, I haven’t been able to dive at Maeda Point very much.  My schedule has been busy or the weather hasn’t cooperated.  As we were looking at the wave reports for the week, Jason mentioned that Maeda Point would probably be a good place to check out.  Awesome…Jason always makes good recommendations!  After posting messages on Facebook about the dive, my friends and I met up at Maeda Point for a dive.  I saw a new flatworm, got some nice pictures of some fish, and also spotted the largest Hexabranchus sanguineus (Spanish Dancer) nudibranch I’d ever seen!

While stationed on Okinawa from 2008-2010, Maeda Point ranked among the top spots my dive buddy Edwin and I liked to go check out.  Yes, the stairs were ridiculously long and sometimes it could be crowded on the steps entering the water (thought I was about to pass out a few times waiting to get in!) but there always seemed to be plenty of wildlife, and even with the areas heavy use, the coral was in pretty good shape.  When Jason suggested the going up to Maeda Point be our next dive location, I jumped at the opportunity.

Trisha, Jason, Cameron, and I met up at Maeda Point mid-morning and the water was really calm.  Jason made a terrific suggestion (by the way, he’s going to make an awesome Divemaster once we’ve finished a few more skills).  There weren’t any large crowds (like on the weekends) either – bonus when it comes to getting up and down those narrow stairs at the bottom.  We suited up and started down the steps.  I was wearing a 7mm wetsuit (yep, I’m totally pathetic) so by the time we got down the steps, the water was looking so good.  As soon as the water seeped through my suit it felt really refreshing.  We all slipped our fins on and descended down the chain. 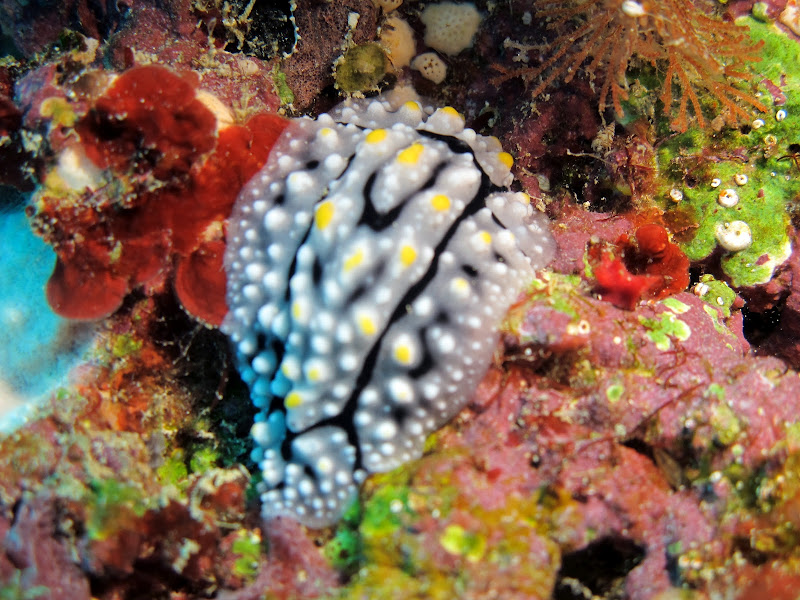 Jason led our dive to the south and for most of the dive we remained at about 40 feet.  All the neat stuff, in my opinion, tends to be in more shallow water and photos tend to come out better (less color is lost).  One of the first animals we saw was of a questionable in nature.  After the dive, Jason and I were discussing whether it was a flatworm or a nudibranch; we both thought for sure it was a flatworm because it lacked a “sausage-like” appearance.  It was really flat!  After posting the photo into the online facebook group, U.F.O.’s – Underwater Flying Okinawa Scubadivers, David Ritcher helped me identify it as a Phyllidia elegans nudibranch.  I went into Robert Bolland’s Okinawa Slug Site and The Sea Slug Forum to learn more about this particular type of nudibranch.  It’s uncommon in Okinawa and it’s main distinguishing features are that it has “light pink dorsal tubercles frequently tipped in yellow, a pale-colored foot having a median longitudinal black line on the sole, and the lateral margins of the sole exhibit black lines.” (Bolland)  I don’t see the pink dorsal tubercles (although this one did have them tipped in yellow) that are mentioned so I went to The Sea Slug Site to check out other photos of the Phyllidia elegans nudibranch.  There were lots of variation in the pictures shown there in regards to the tubercles.    Another thing I learned is that looking at the sole/underside/foot of nudibranchs can help lead to a correct identification.  I’m not a big fan of touching nudibranchs but I will probably give a quick look here from now on just to gain more information.  Another interesting bit of information I came across when researching the Phyllidia elegan nudibranch is that if it’s taken out of the water, it (along with all other phyllidia) will give off a slight odor.  Robert Bolland says these toxic, smelly  chemicals are used to warn off predators (who likes eating something that smells bad, right?!), and Bill Rudman on The Sea Slug Forum warns against using this type of nudibranch in an aquarium because those same chemicals have the potential to kill every single fish overnight. 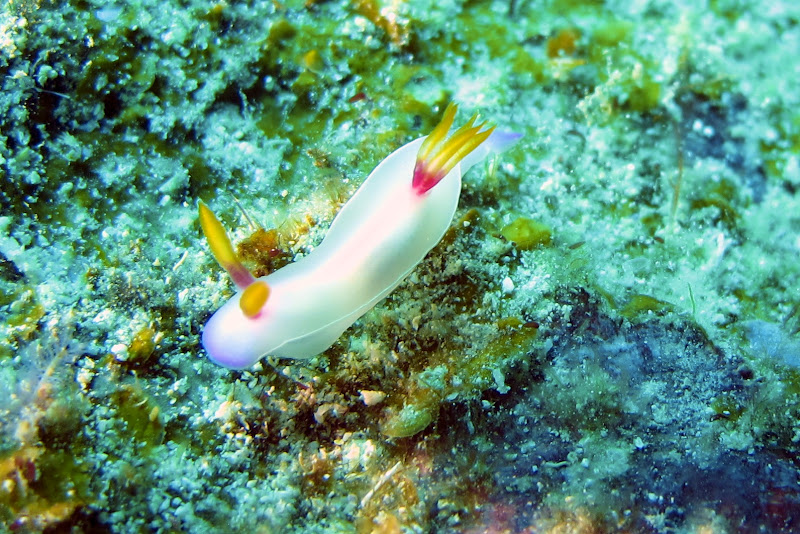 As we kicked around Maeda Point’s southern tip in the cove, I noticed a Hypselodoris bullocki nudibranch just crawling out in the open on top of a rock.  I really wanted to get in close but my camera housing case prevented me some doing so….very annoying.  I did managed to get some nice aerial-like photos looking down upon it.  There was a small current present so I didn’t hang around for too much time.  Back at home I learned that the Hypselodoris bullocki nudibranch has a lot of variation when it comes to color – it’s body color can range from white to purple, it may or may not have a little band of color around the edge of it’s body, and the gills (found along the underside) and rhinophores can also vary in in color. 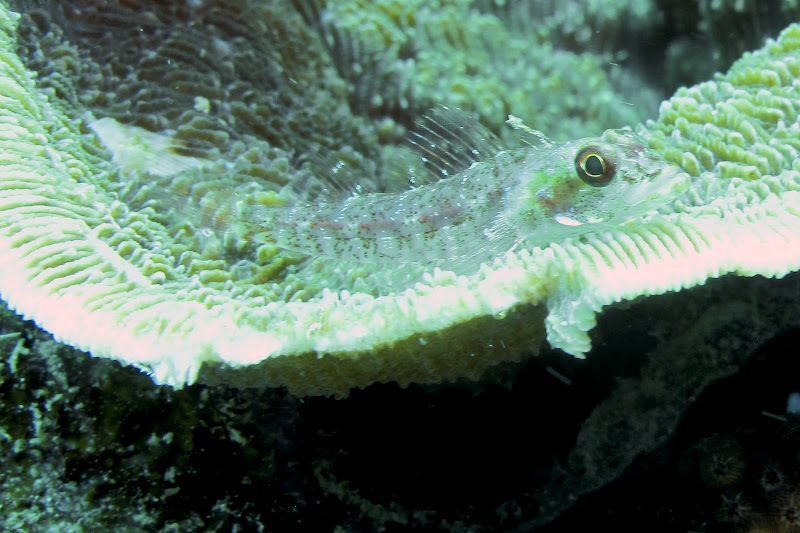 After about 35 minutes, Trisha started running low on air so we circled back.  Jason led her to the chain and watched as she made a safety stop and then surfaced.  The entry/exit at Maeda Point is fairly easy so Trisha made it back to the steps without any issues. Cameron, Jason, and I still had a fair amount a air left in our tanks so we continued kicking to the north. 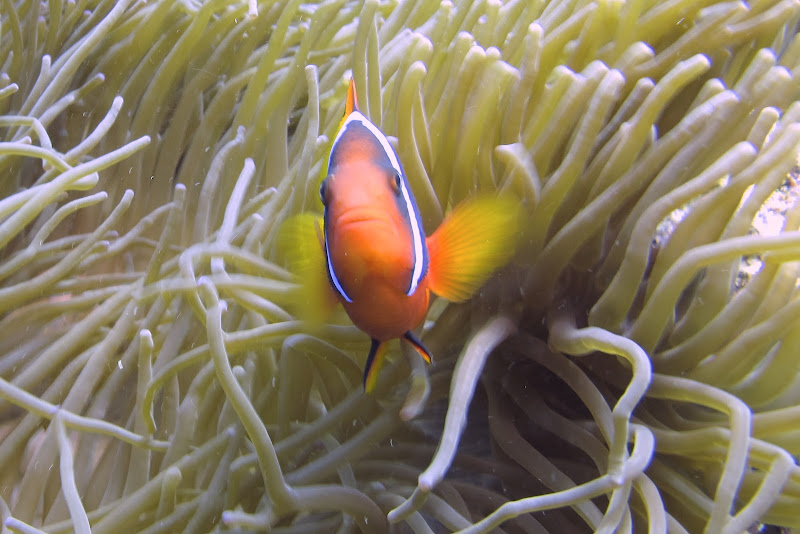 As we were combing along the surface of the rocks I spotted a flatworm I had never seen before,and I later identified it as a Pseudoceros bimarginatus.  This little guy was “on a mission” too.  He was crawling so fast that for the couple minutes I was looking at him, I found it nearly impossible to correctly set up my strobe and camera.  Every time I had finally finished setting it, he would be in a new position and then I’d have to start all over again.  I ended up just trying to get some photos before he disappeared so nothing really turned out to well.  Although not really visible in the below picture, the outer band on this particular flatworm was a neon green.  I’ve seen other images of the Pseudoceros bimarginatus flatworm and not all of them have a green band here – some appear to have a more yellow coloration. 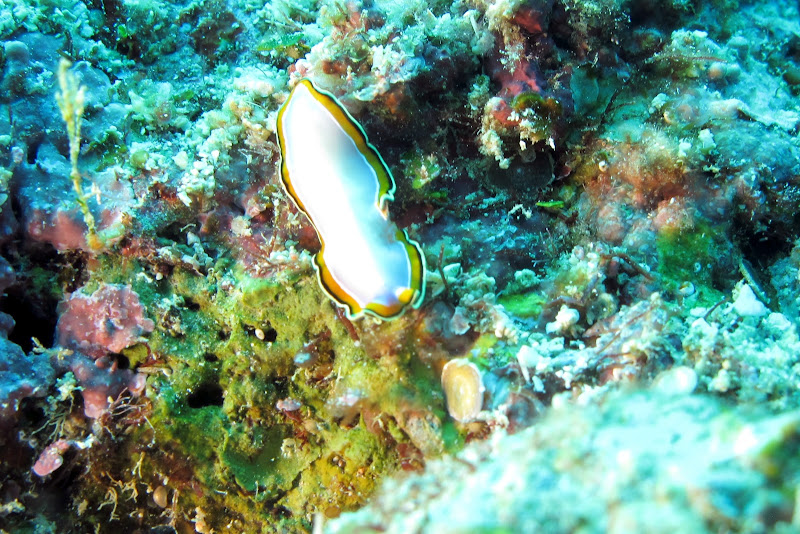 After I finished obsessing over the flatworm, Jason motioned to me that he was heading back to the chain with Cameron.  I was starting to feel a little chilled so it definitely seemed like a good idea.  As we kicked back I noticed a Phyllidia coelestis nudibranch resting on top of some rocks. 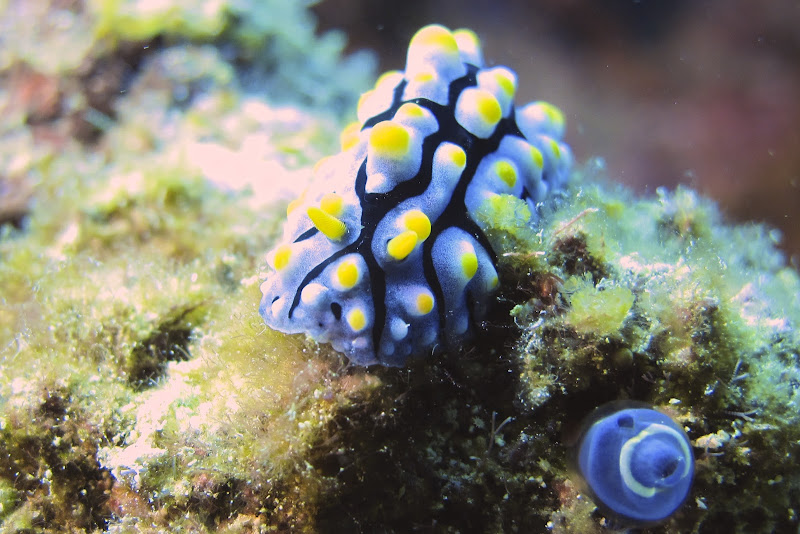 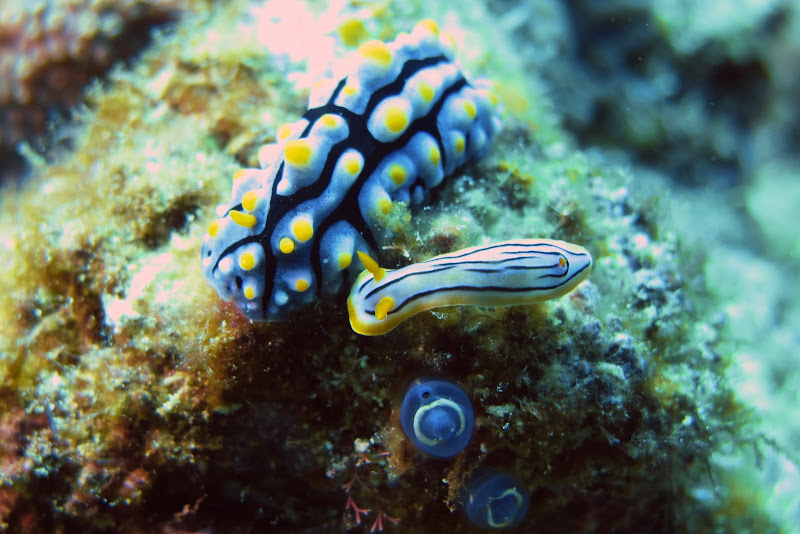 As I neared the chain to make my safety stop, I decided to take some macro-photos of the pink coral that surrounded me.  My sister-in-law, Bethany, is seriously obsessed with the color pink.  It’s pretty ridiculous, and I’m always joking around with her about it.  If she were to buy scuba equipment she’d definitely get everything in the color pink (gag!); there’s no doubt about it!  She wouldn’t be able to control herself and resist the temptation.  When I say everything, I really mean everything.  Anyways, I thought she’d enjoy the picture of the pink coral so I took a few pictures.  When I sent them to her on facebook she wrote back, “oh wow! Thanks for thinking of me =)” 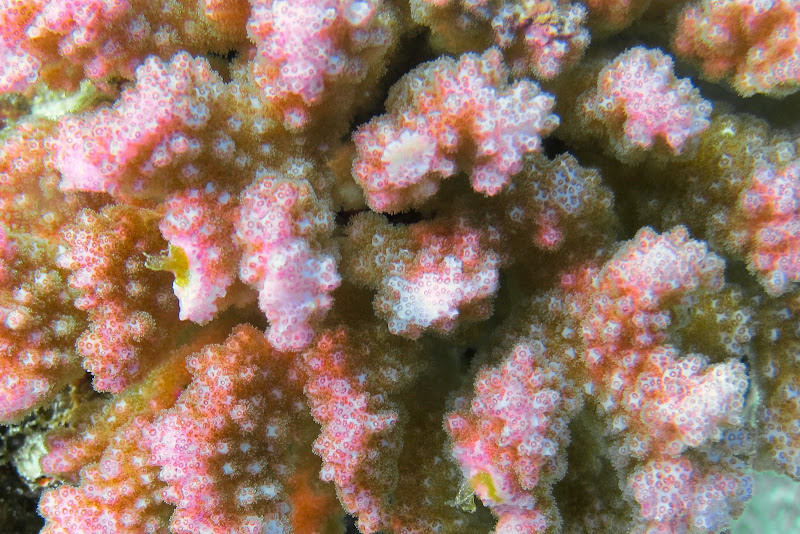 As I came up to a depth of around 10 feet, I noticed a triplespot blenny watching me from the rocks.  These fish are so inquisitive looking and make great subjects for pictures.  I couldn’t pass up the opportunity even though I’ve seen them many, many times. 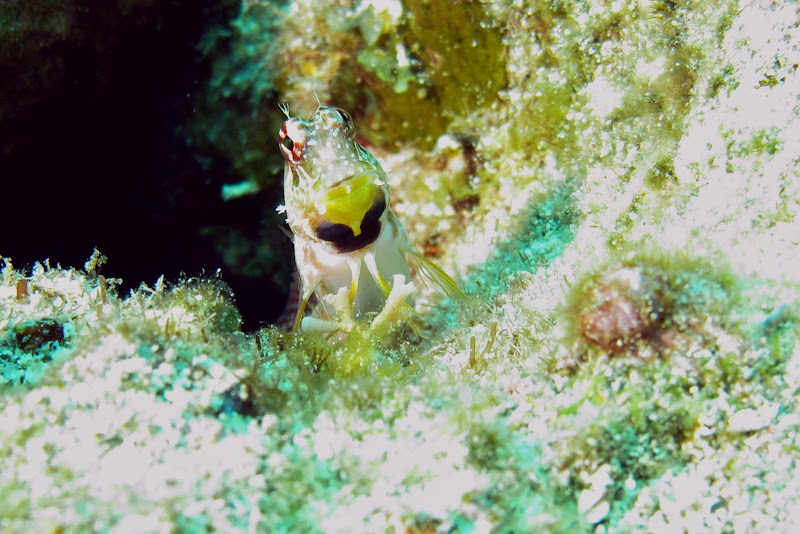 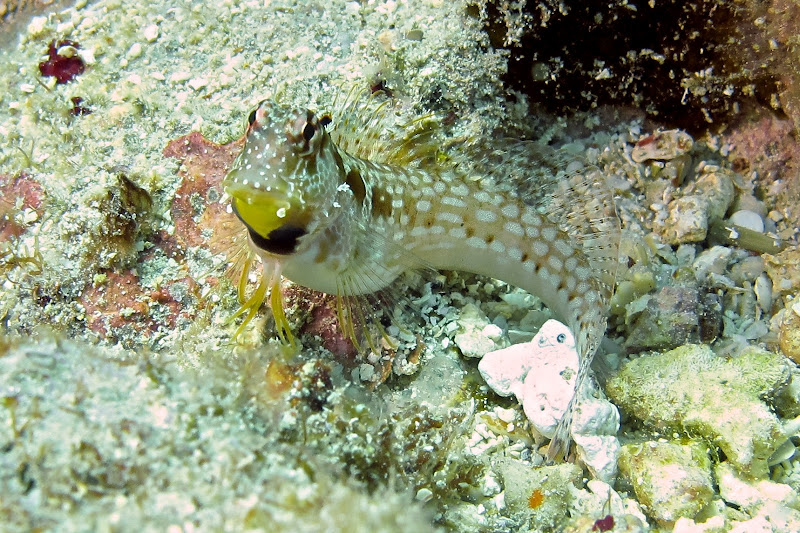 A little further on I spotted a little combtooth blenny that was only about 2 inches in length.  This little dude was quick but I managed to get one photo before he shot into a extremely tiny hole in the rocks. 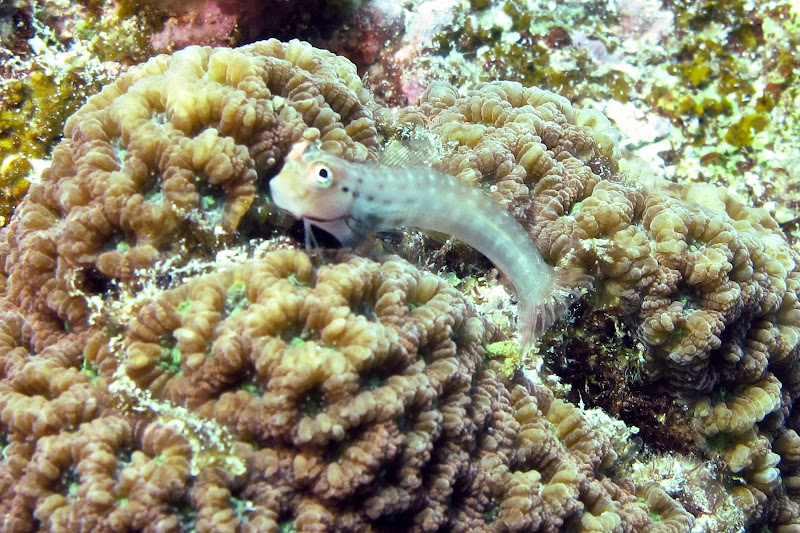 Just as we were about to exit, Cameron pointed out what looked to be a nudibranch.  I got in close to take a look at what I thought they were pointing at but then came to realize I was only looking at the nudibranch’s gills.  Whoops.  I widened my perspective and realized I was looking at a 14-16 inch red nudibranch.  Wow…incredible!  While walking up the steps we were all talking about it.  Why was it in such shallow water (5 feet)?   Was it really a nudibranch?  None of us had ever seen one so big.  We also agreed that whatever we had seen was really lucky not to have been crushed to death by all the snorkelers who were tromping around where it was located. 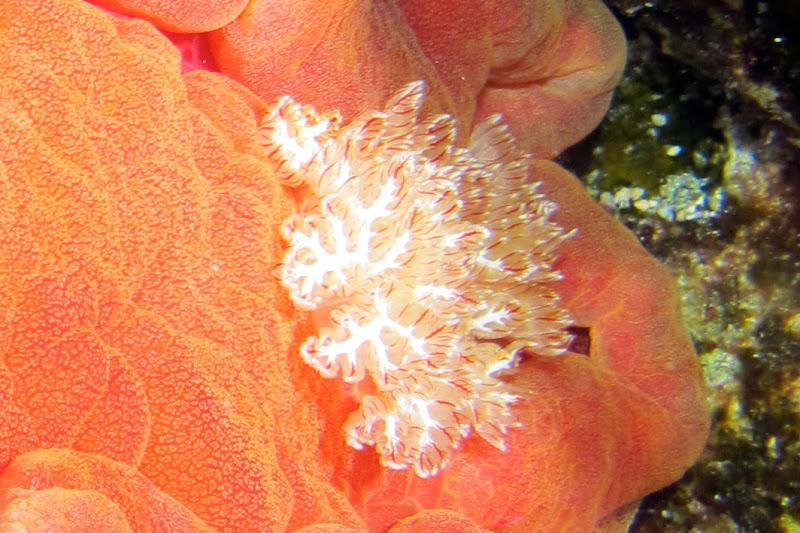 White Nudibranch?  Nope…Just The Gills Of A Hexabranchus Sanguineus Nudibranch

After coming home I managed to identify the mysterious object as a Hexabranchus sanguineus nudibranch.  The scientific name can be translated into “six-gills blood-colored.”  Although these are common on Okinawa, this was the first time I had seen it so I’m still pretty stoked.  After posting the photo in U.F.O’s Randy Birt, an gentleman who knows a TON about nudibranchs, wrote back to me, “These are so cool. Folks dont see them here that often, but they are around. If you see one again touch it lightly…because they have a unique defensive mechanism. They unroll their edges and get about twice as wide and flap the bright red areas at the edges of the mantle. It is not often that you get to see behavior with nudis, but this is one that is very interesting.”  Ugh…like I said earlier in the post, I’m not one to play with wildlife to get great pictures but this is something I would have really liked to see.  Hopefully I’ll find another and get to see and record this behavior in the future. 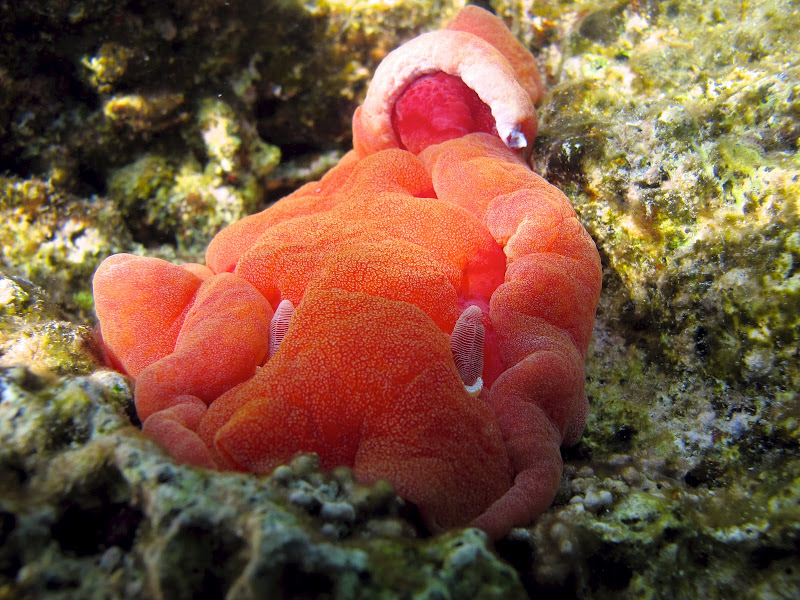 This defensive mechanism described by Randy is what gives the Hexabranchus sanguineus nudibranch it’s generic name of “Spanish Dancer.”  When it’s swimming or has been disturbed it will make a bucking movement with its head and tail while undulating the flaps along the sides of its body, reminiscent of Spanish Flamenco Dancers.  Having travelled to Spain and gone to see a Flamenco performance, I can verify say that the below video shows why the Spanish Dancer is aptly named.

Maeda Point proved itself to still be a great dive site and I am looking forward to going back.  I also got to meet a new fellow diver, Cameron, and enjoy my time with Trisha and Jason.    Hopefully we’ll be able to dive again!