As a way to wrap up my most recent Advanced Open Water class, we finished with an AWARE-Fish Identification dive. Everyone had a great time looking up several different fish they saw, I spotted a few nudibranchs I had never seen, and we all enjoyed the enormous octopus that Malina found hiding in the rocks!

In my opinion, the AWARE – Fish identification Adventure Dive offered in the Advanced Open Water Course is the most fun of all 5 dives.  Diving is great but I really enjoy it when I’m able to focus my attention on all the details of the reef. 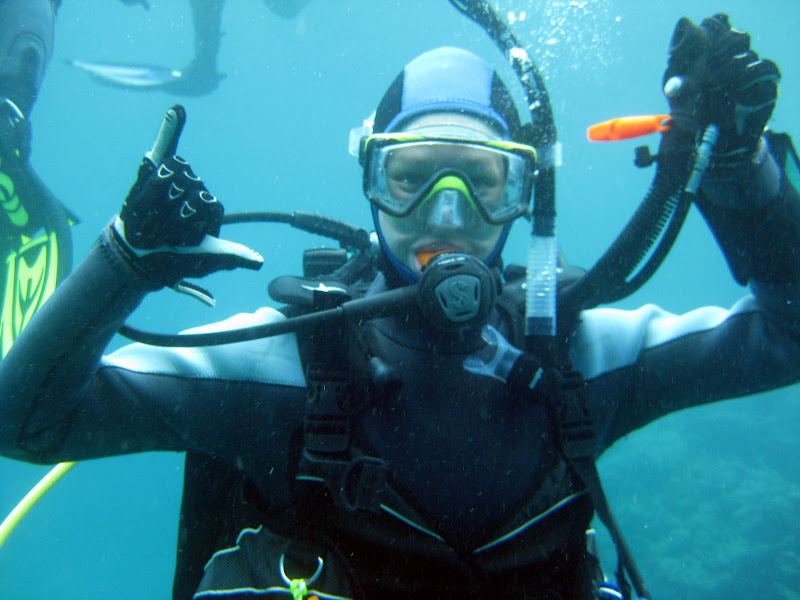 After everyone prepped their slates and Jason gave a dive brief, we headed down to the water.  It was so calm and I was really hoping this would be a great dive…I wasn’t disappointed. 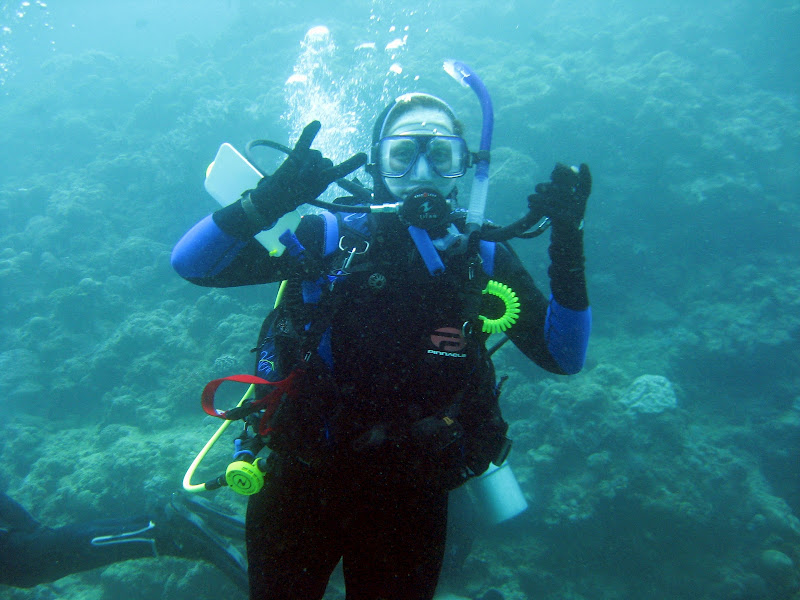 As we descended near the chain, Jason led the group slightly north to where there are lots of fish.  Everyone found a fish to draw on their slate and while they were doing that, I took photos of the students and also looked for some wildlife to photograph.  I spotted a yaeyama blenny on the rocks and managed to get one good photo. 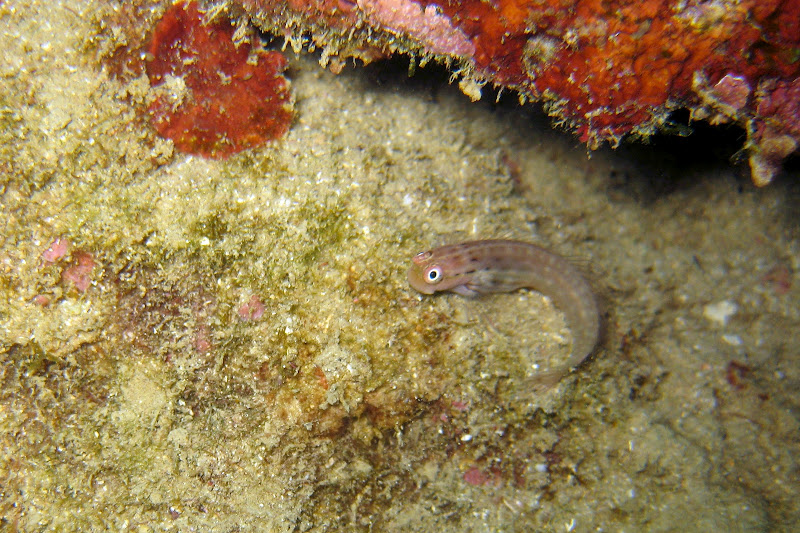 After carefully combing over the coral I also found a Phyllidia coelestis nudibranch.  I managed to get several good shots of it because the students were all busy drawing pictures on their slates. 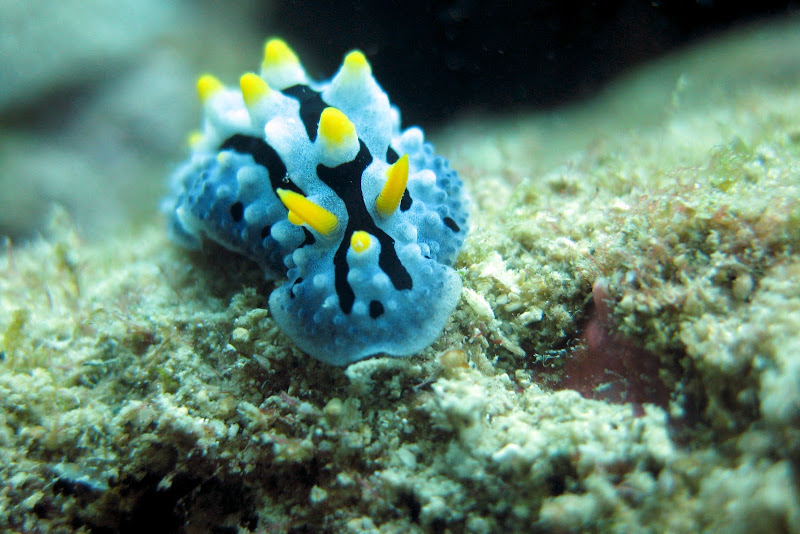 After everyone completed the drawing of an unfamiliar fish, Jason and I rounded everyone up and we started our underwater tour.  I took up the rear of the group to supervise everyone and as we kicked out over the reef I spotted a very small Jorunna funebris nudibranch.  It was no bigger than the length of my thumbnail, and I’m still not sure how I managed to spot the little guy.  I was only able to get a few photos but thankfully they turned out. 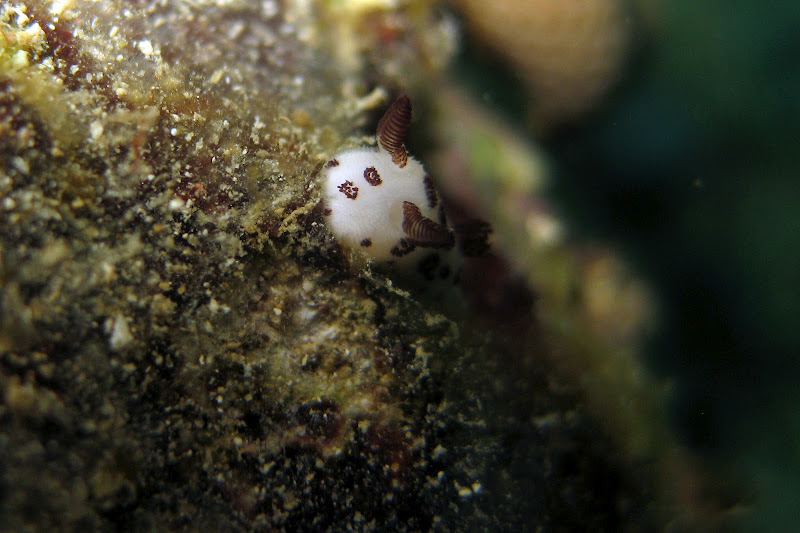 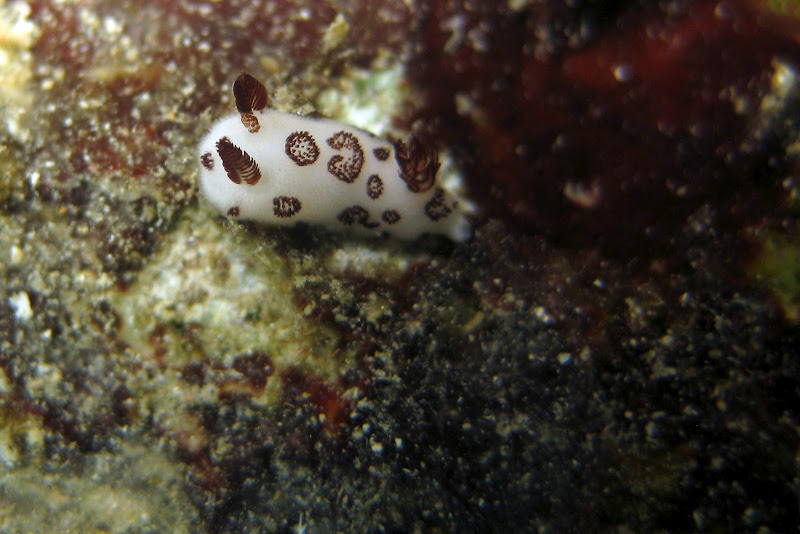 About The Length Of My Thumbnail…Perhaps A Juvenile

It was only about a minute later until I made another discovery…and I still am not sure what excatly it was that I found.  I saw this flat reddish-pink object slowly moving overtop of the rocks.  I didn’t see any rhinophores or branchial plumes so I’m leaning towards the unidentified creature as being a flatworm.  I searched through all the flatworm pictures on wwwnudipixel.net and my best guess is that what I saw was a juvenile Pseudoceros goslineri.  Interestingly, Pseudoceros goslineri flatworm mimics the Platydoris formosa nudibranch. 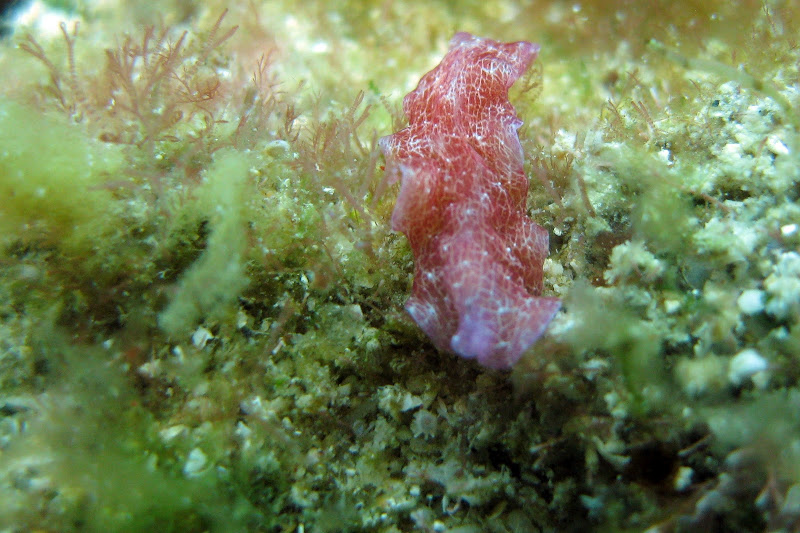 After heading to the north for a bit, Jason started heading southward.  We soon came upon a common lionfish that was swimming over the broken coral bed.  He fanned out his fins a bit and everyone in the group was able to get a good look.  I was really impressed with everyone’s buoyancy while watching the lionfish – it’s easy for people to get distracted and all of a sudden they’ll be crashing into the reef and each other…but this didn’t happen!  I was delighted to see everyone come into a hover as if it were as natural as walking! 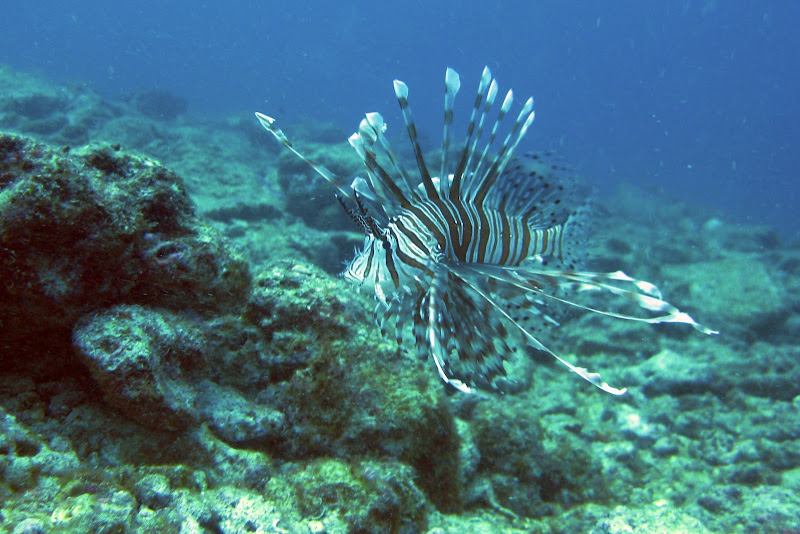 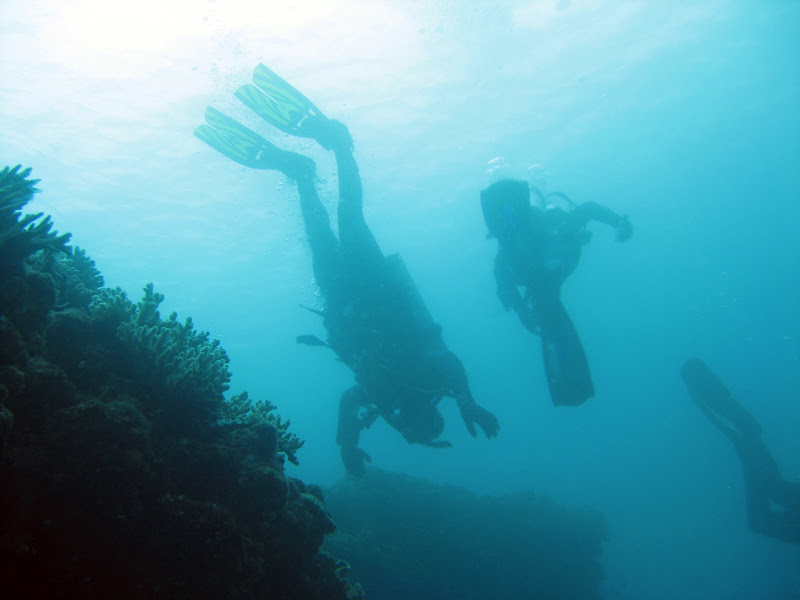 Parth Peering Into The Rocks While Showing Off His Buoyancy Skills

As we kicked southward, I saw Malina gesture to Jason that there was an octopus in the rocks.  As everyone gathered around the ledge under which the octopus was positioned, I slowly swam forward to get a look.  Instead of getting close to the octopus in order to point it, Malina had taken out her flash light to show me where they were all looking (so smart!). 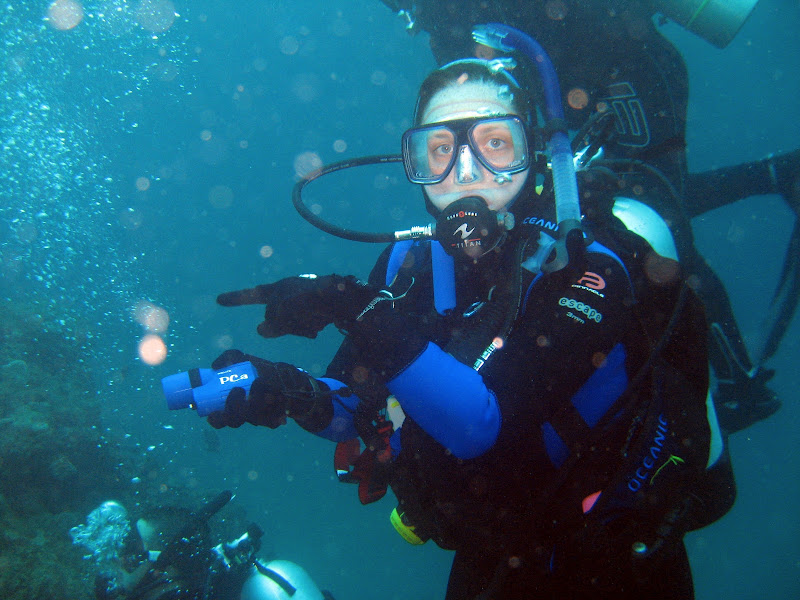 Malina Pointing Towards The Octopus She Spotted With Her Flashlight

The octopus was so well camouflaged with the rocks it was actually really hard to see.  Malina made a great discovery!  I motioned to her and the rest of the group that it was REALLY BIG and then gave Malina a high five. 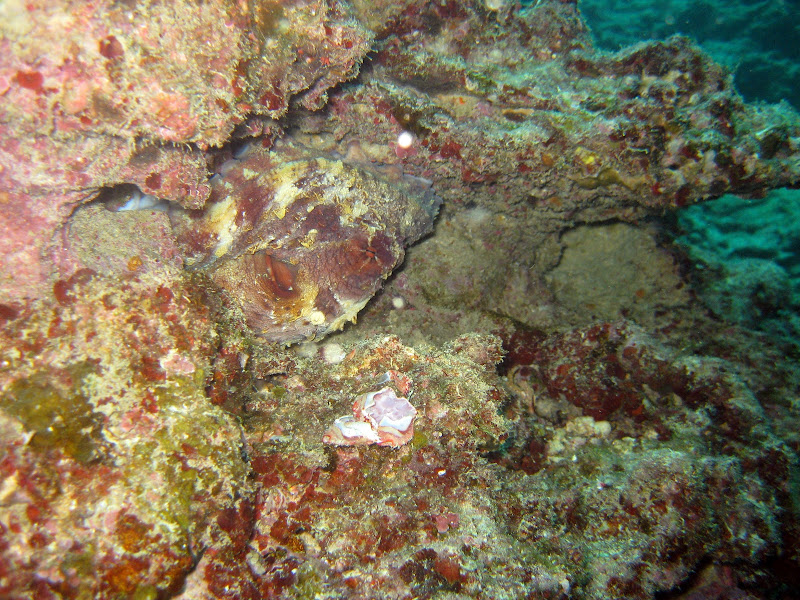 We all hovered around the rock for a couple minutes hoping the octopus would come out from under the ledge but he didn’t want to budge.We decided to continue our dive and hope to see him “out and about” when we returned to the spot on the way back. 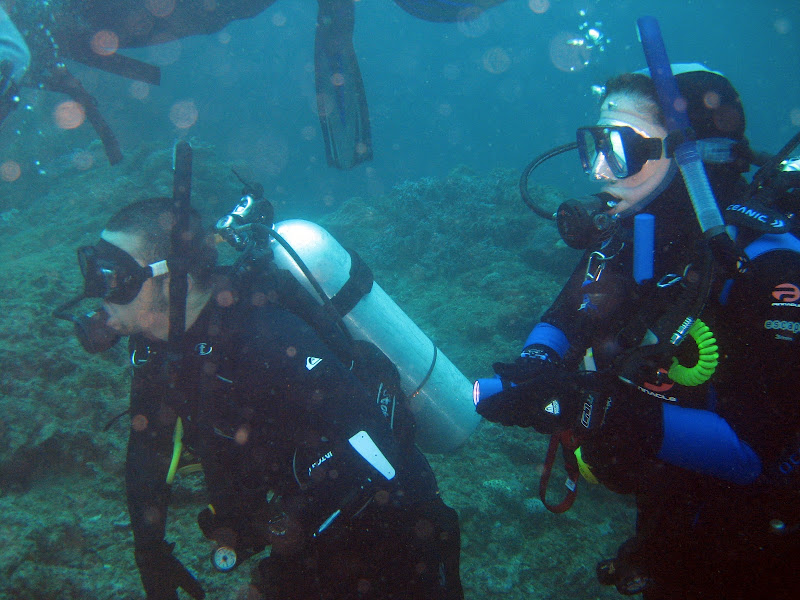 Allan and Malina Watching The Octopus 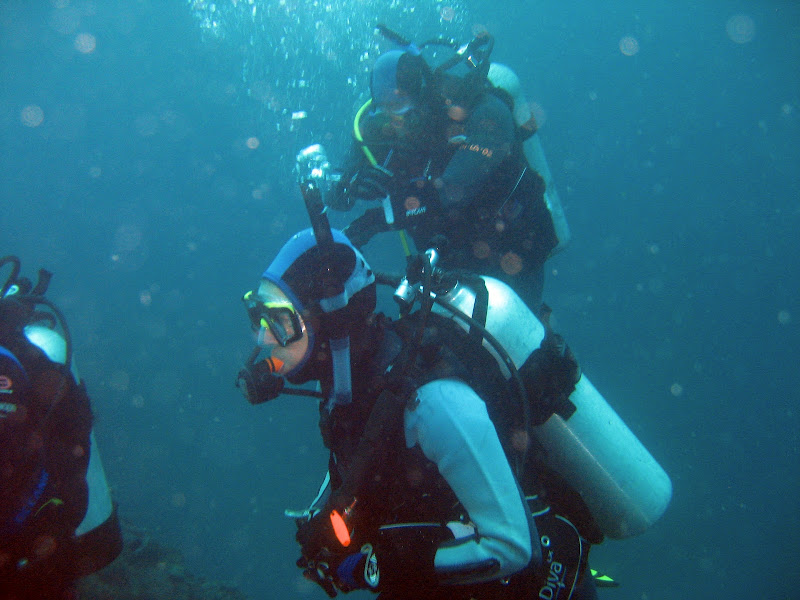 Stephanie Checking Out The Huge Octopus

When we did return while heading back to the exit, the octopus was still under the ledge.  I managed to get a few up-close pictures of him and also a 30 second video.  While doing so he would change his colors every once and a while…it was unreal seeing him do from off-white to deep red in only a matter of seconds.  Additionally, he would also change the shape of his body – going from jagged to smooth in the blink of an eye.  It was incredible. 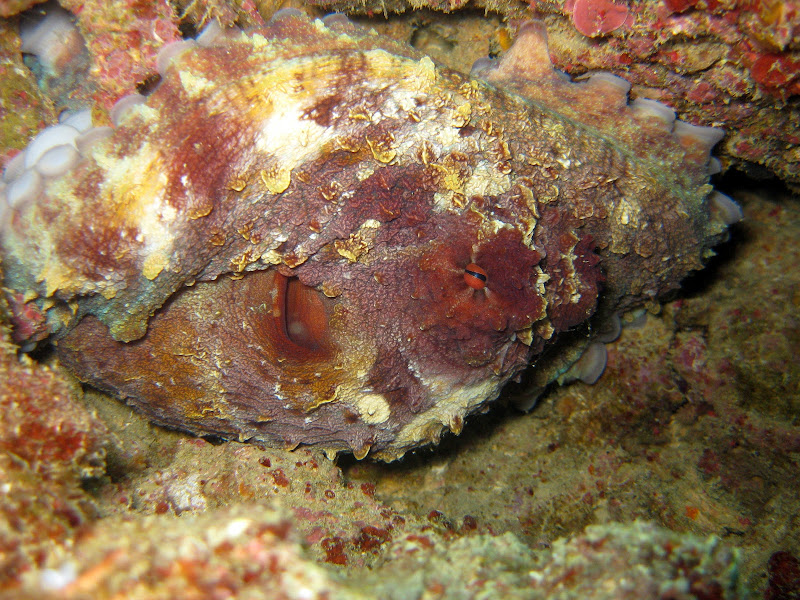 Octopus Hiding In The Rocks

One of the things that I like about scuba diving so much is that it’s always a new adventure.  Even when returning to a spot that I’ve dived at least 40 times I am still able to see and enjoy new experiences.  Whenever I go diving I’m always excited about what I possibly may see – the majority of the time I’m not disappointed. 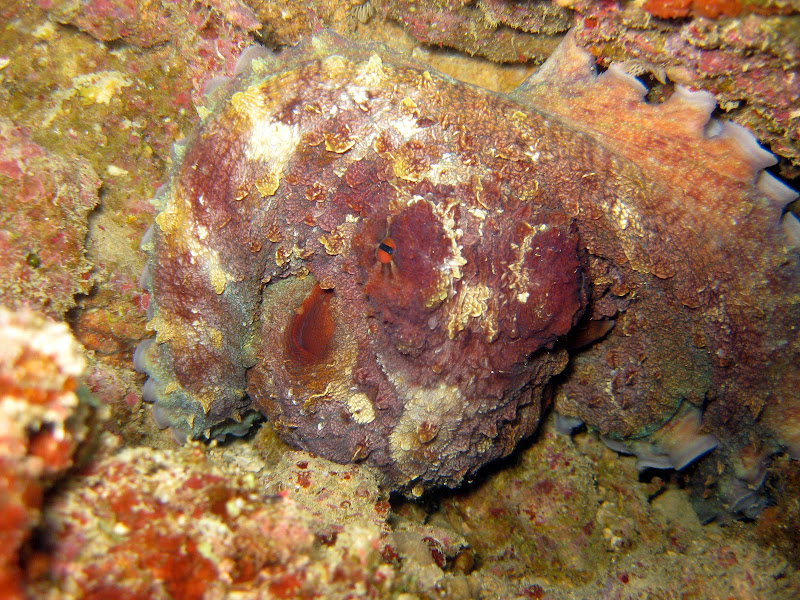 Probably The Largest One I’ve Ever Seen

As we finished our dive with a safety stop, I poked around the rocks to see if I could nab anymore pictures.  I spotted a tiny hermit crab within the rocks and he didn’t bother retracting into his shell so I was able to get some nice photos.  I also spotted a Pseudobiceros Mikros flatworm…it was absolutely beautiful.  I must have snapped about 10 pictures of it because the last time I saw one, people said the photo wasn’t clear enough to determine the species.  I think I overdid myself this time! 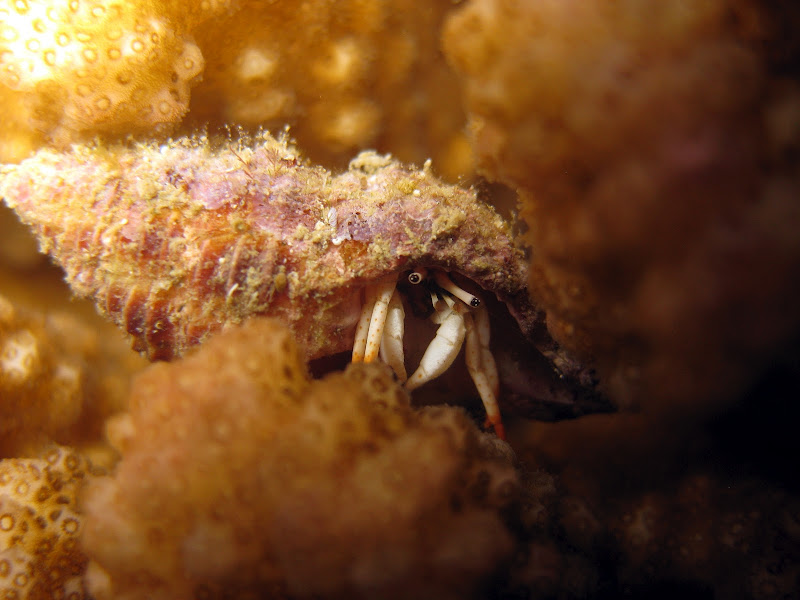 Hermit Crab In The Coral 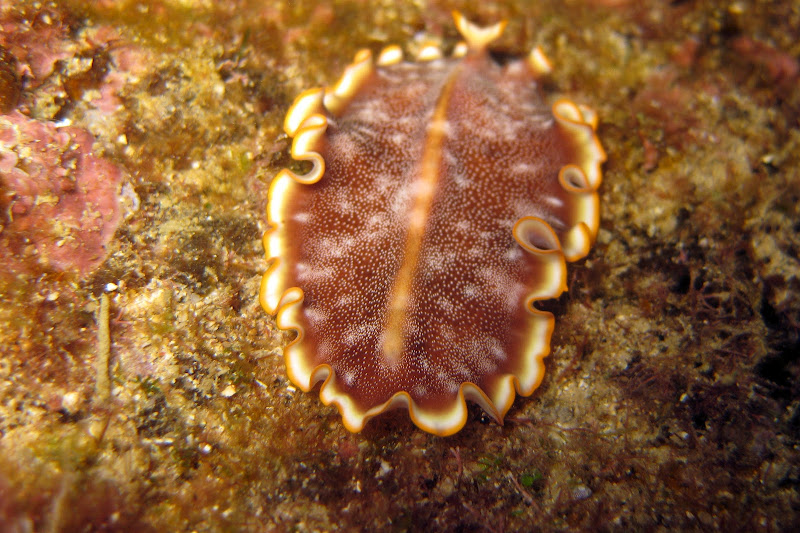 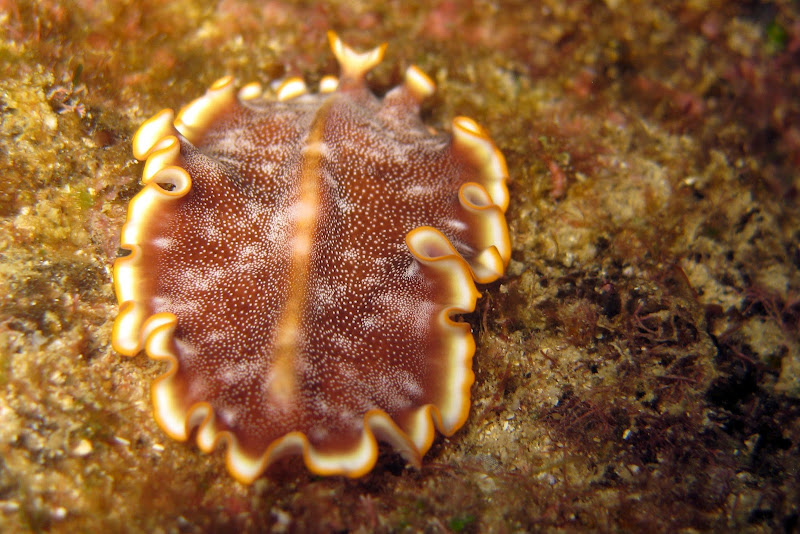 Spotted Near The Chain

While we headed back to shore, everyone was excited to talk about the octopus we’d seen.  I was perhaps the most excited!  I’m pretty sure everyone said it was their first time getting a really good look at an octopus.  I was really happy everyone had such a good time.  I also asked the students to describe some of the first they’d seen so their memory would be fresh when it came time to looking in my Reef Fish Identification book once we got back on land. 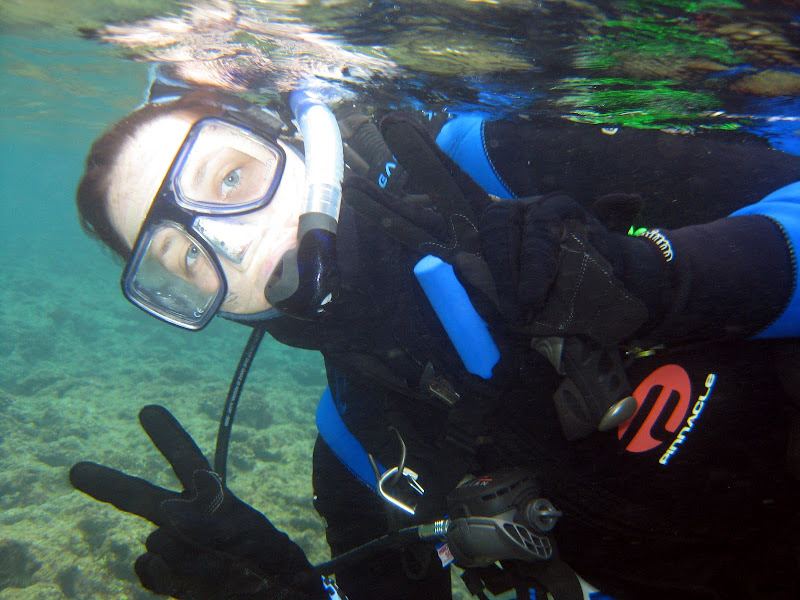 Malina Excited About Our Dive

I really enjoyed diving with everyone from the class.  They all were excited to learn and everyone had a good attitude.  Hopefully I’ll get to dive with them all again in the future. 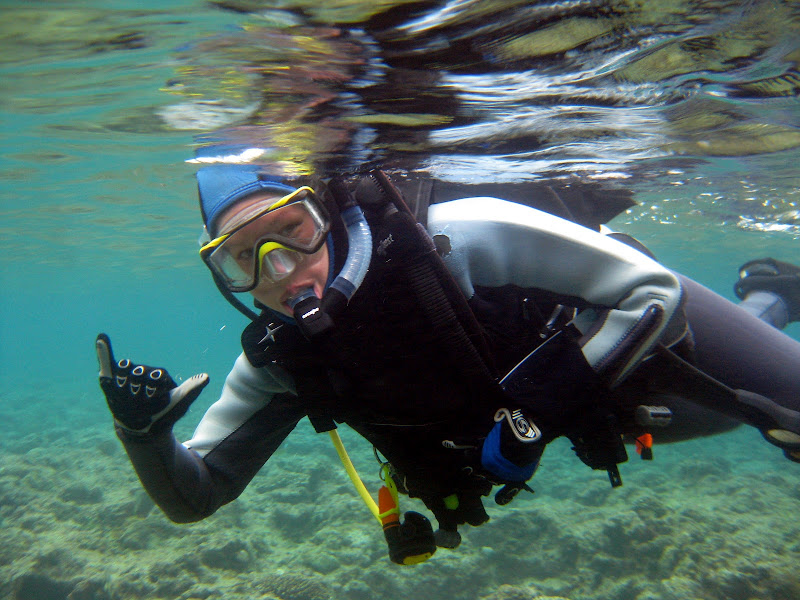