Currently, I am working with a really great group of divers in an advanced open water class.  Everyone is excited about diving, they want to improve their skills, and explore new aspects of diving.  Last night I worked with Jason and took 3 students into the water.  When we got done Stephanie told me she loved it because it was fun and the colors were really vibrant.  Read more to see what we did and saw!

My advanced class this past week was a really awesome group of people – service members, spouses, veterans – and we all had a great time.  That’s one of the great things about diving (and teaching) – I get to meet lots of people who want to have fun and hear some really neat stories about where they are in life.

Two of my students, Parth and Robert, are getting ready to PCS to California and we had a night dive planned for Friday night.  I suggested to them that we bump up our dives to earlier in the week (when the weather and sea conditions looked WAY better) that way I could ensure they’d finish the course before having to leave Okinawa.  They agreed and Stephanie, a mother of 4 children, also agreed to come along because it would be easier for her neighbors who were watching over her children while she was out.  I was excited to help meet everyone’s needs and they were excited to try out night diving for the first time. 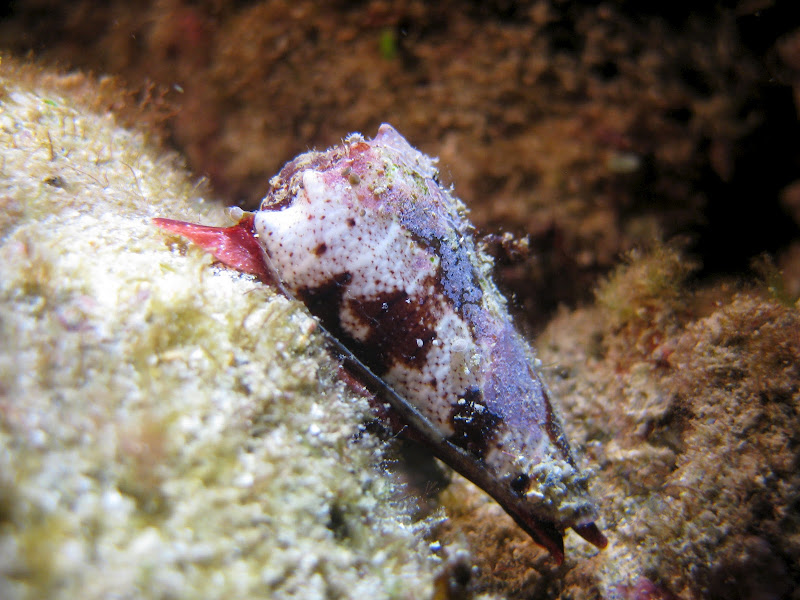 With our lights turned on, we entered the water and waded out to where the water came up to our chest.  Slipping on fins at night can be a challenge but the group quickly handled the task and then Jason led us to where the reef drops off to about 20-25 feet.  We oriented ourselves to several object onshore and then began our descent in to the dark waters.  Near the bottom, I motioned for everyone to follow me and we kicked over to a sand patch.  Everyone knelt down and then I motioned for the group to turn off their lights.

Sitting underwater in the dark is actually pretty cool and you’re actually able to see a lot.  As our eyes adjusted, I signalled to everyone asking if they were OK. Everyone appeared cool and collected – AWESOME!  Jason had explained on the surface that if we waved our hands around underwater, we would see little green sparks of light in the water – these sparks are light are called phosphorescence or bioluminescence, and they are primarily produced by dinoflagellates (a type of plankton).  There are several different reasons for why underwater wildlife has the ability to produce phosphorescence – communication between species for mating, attracting prey, and in our case, defense mechanisms.  When the dinoflagellates are disturbed,  they create a bright flash (through a chemical reaction) in an attempt to startle the predator and make a quick escape.  After waiting about 30 seconds, I starting punching my hands back and forth in the water – there were a few sparks.  The students soon joined in and everyone had the phosphorescence lighting up around them! 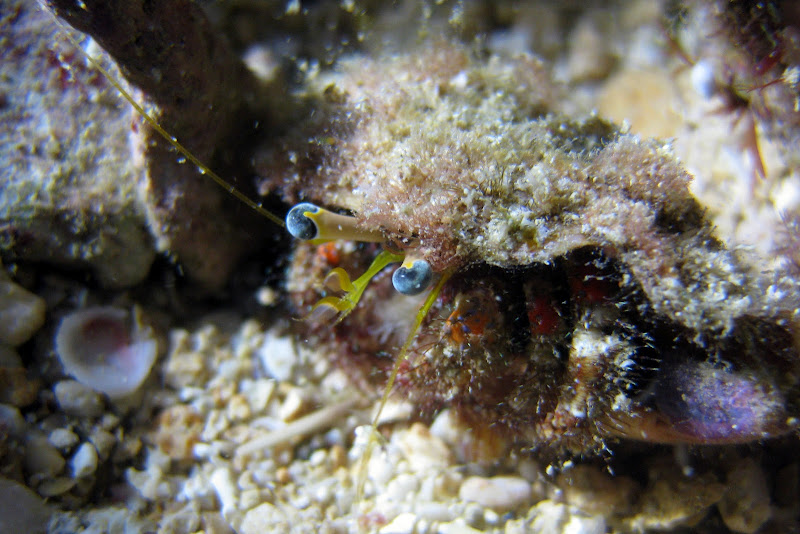 Hermit Crab – About 4 Inches In Length

One quick story and then we’ll go back to the dive: The best phosphoresence I’ve ever seen was when I took my Night Diver Specialty Course in southern California.  I suppose there must be a higher concentration of dinoflagellates in that area that here in Okinawa.  I remember just waving my hand in the water and it came alive with light like nothing I’ve seen anywhere else.  I thought it was great so I started with just waving my hands…then I pretended to cast spells underwater with my finger as a magic wands…which transitioned to me needing to “brush dirt off my shoulder”…it culminated with me pretending I was the next Rocky Balboa.  By the time we flipped our lights back on, I was out of breath from all my spastic movements (leave it to me to act like a spaz)!  When my instructor and I finished the dive, he mentioned that it seemed like I had way too much fun with the phosphoresence and he was right!  It was probably one of the neatest experiences I’ve ever had on a night dive.

After we turned out light back on the students practiced their underwater navigation skills.  While I waited in a stationary position, groups of two (with oversight by Jason..he’s terrific help!) navigated 100ft out from our position and then turned around and came back – everyone sit me spot on.  With that, we began our underwater tour. 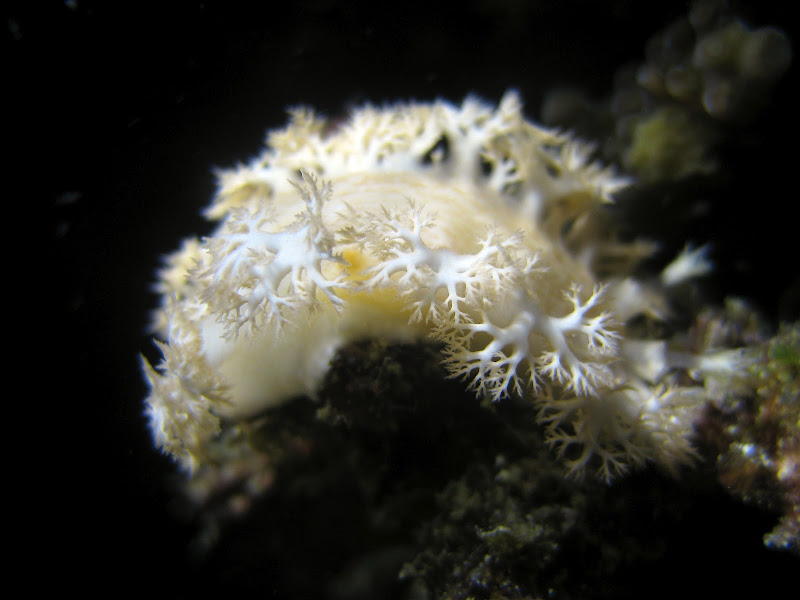 As Jason led us out, we spotted what appeared to be a cone shell sitting atop a rock.  Prior to the dive I have mentioned to the students that I had previously seen them “out and about” so it would be really important for everyone to be aware of their surroundings – neutral buoyancy would be the best guarantee for avoiding injury.  As we hovered around the rock, I motioned to all the students not to touch the cone shell.  After moving about 10 meet over from the cone shell we came across a couple of hermit crabs (one with tube worms growing on its shell).  I snapped a good photo of one of the hermit crabs but the one with tube worms really wanted to stretch it legs.  He was running all over the place and it made it difficult to get a good picture.  I attempted to take a video but it is a bit wobbly from me looking back and forth from it to the group.

As we headed northwest to the deeper water at Ark Dive, I came across what appeared to be some sort of nudibranch.  The overall body shape looked correct but it had lace-like/leafy tentacles.  As I approached I also noticed what appeared to be two rhinophores retract inwards.   Because I was at the tail end of the group, i quickly snapped some photos.  Only one turned out but I think it’s a pretty cool looking picture.  When I got home I referenced The Okinawa Slug Site (http://rfbolland.com/okislugs/) and identified it as a Tritoniopsilla Alba Nudibranch.  Turns out this type of nudibranch is uncommon around Okinawa. A little further on I noticed what appeared to be an undeveloped nudibranch.  It was translucent and I could see it’s internal organs…kind of creepy.  It was extremely small, and if I had give an estimate I’d say it was less that 1 inch in length.  I don’t even know how I spotted it to tell you the truth! 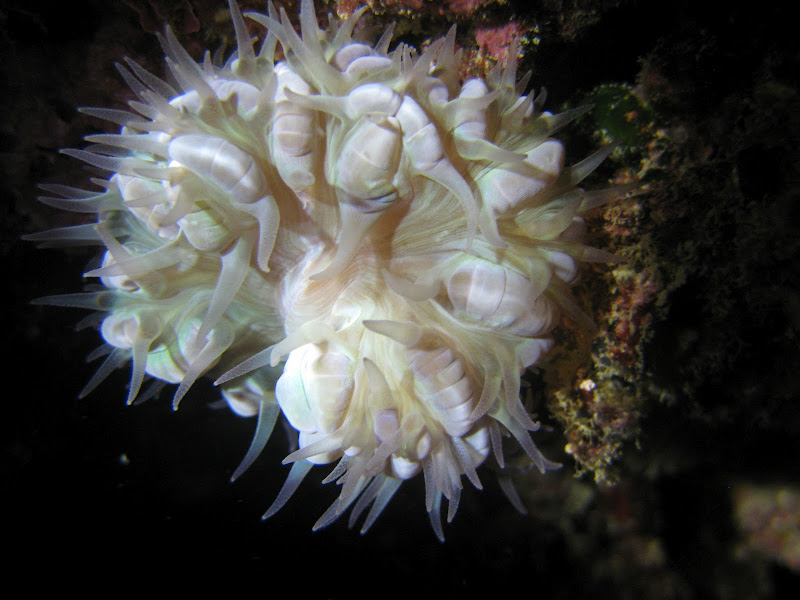 Back at the chain for our safety stop, I looked along the reef wall to see if I could get any last minute photos.  After looking around for a bit I decided to take a picture of a common ghostgoby.  I slowly approached and snapped a photo before he darted away. 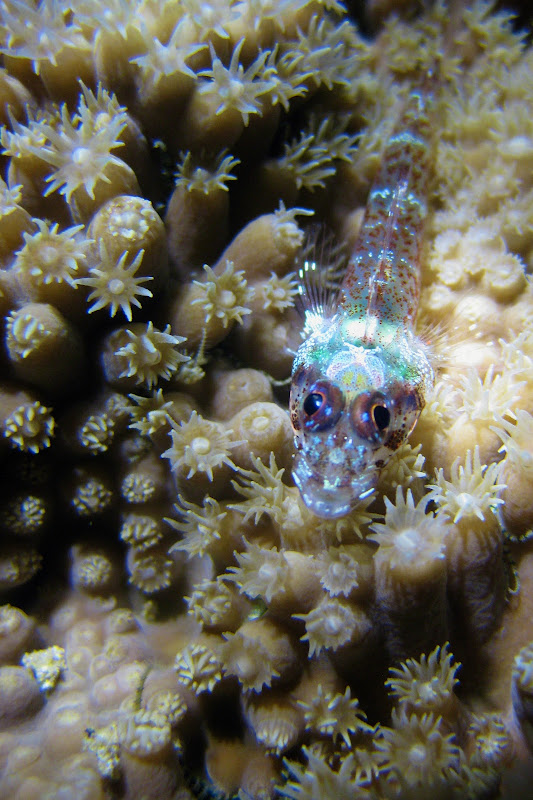 As we kicked in Stephanie said she was hooked on night diving.  Not only did she have lots of fun, she said the colors were really vibrant.  Additionally, night diving would work well for her and her husband as a “date night.”  I couldn’t agree with her more!  I’ve found night diving to be really fun, easier to coordinate with James’ work busy schedule, and I tend to notice a lot more details on the reef than during regular day dives.