Trisha is doing a great job at knocking out her certification dives for her Advanced Open Water Diver certification.  Today we met up for a deep dive, some dinner at Bella Napoli, and then finished off with a night dive.  We saw lots of cool stuff and ate some really yummy pizza!

When we initially arrived at Ark Dive the water was fairly calm and there was a light rain falling.  I wasn’t too sure if Trisha would want to dive but she was really motivated to get in…I love having students that pump me up!  We hauled our gear under the little round gazebo so we wouldn’t get our dry clothes wet and I gave Trisha a run down of what we’d focus on for her deep adventure dive as we suited up. 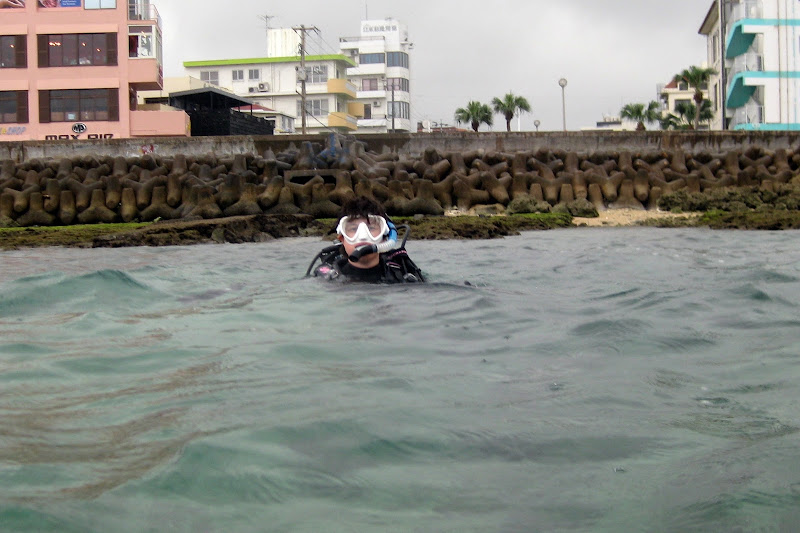 Despite The Rain and Waves Trisha Was Ready To Dive

The tide was REALLY far out so we ended up walking out pretty far before being deep enough to get our fins on.  With only about a foot of water above the coral shelf, we very carefully followed the chain out to the drop off.  I thought for sure we’d be crawling over the coral, but we actually didn’t have any problems.  WHEW!  That would have really wrecked the experience… 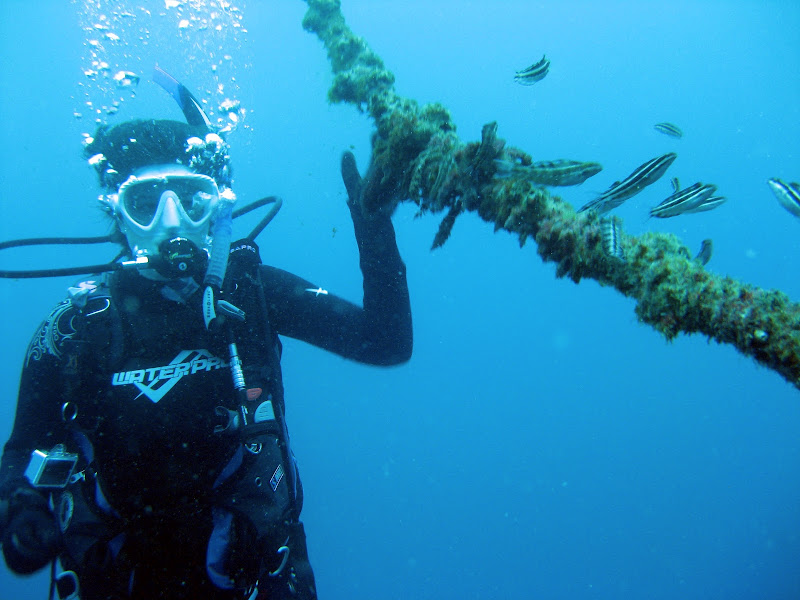 Trisha Descending Down The Buoy Line

Although the swim out to the red buoy wasn’t very far, the sea conditions had gotten worse and it made our task more difficult.  Trisha was a really good sport despite the rough water and kept kicking until she reached the buoy.  In order to catch our breath, we held onto the buoy line and chatted for a bit.  I told Trisha she was a “legit diver” for not giving up despite the somewhat nasty sea conditions and weather.  Once we were ready to descend, we slowly made our way down the line for about 20 feet.  At this depth, the surge and current were reduced so we finished our descent without the buoy line.  Near the bottom I found a toadstool leather coral and snapped some close-ups of it. 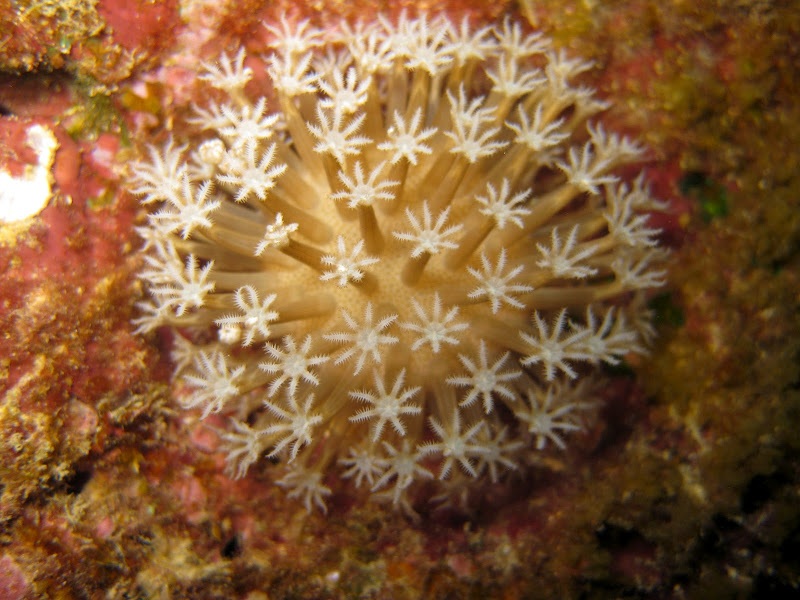 After we swam to the section underwater that drops to 85 feet, we knelt down on a little patch of sand and worked our way through several different skills.  First we conducted a speed test where Trisha did several basic math problems – she was much faster than when compared to her surface test – nitrogen narcosis wasn’t affecting her!  Then we looked at how the various colors on our equipment were affected by the lack of light penetrating to our depth…everything had a blue tinge.  Lastly, we compared our depth gauges and they were registering the same thing – 83ft. 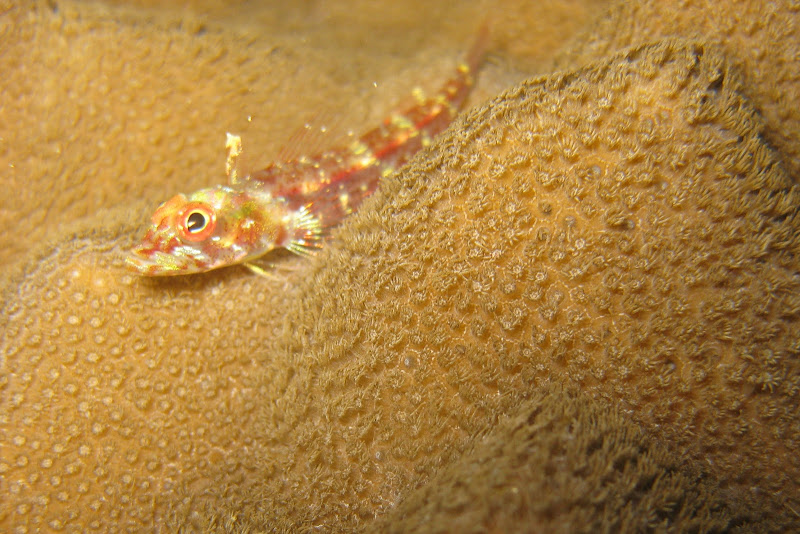 Once finished our skills we shot an azimuth on our compass and started swimming back to shore.  We ended up coming across a tiny largemouth triplefin, and I managed to get some nice pictures.  However, these fish tend to be pretty skittish so he didn’t stick around too long.  Next we came up on a black-headed sea snake.  Their venom is 10 times more deadly than that of a cobra, but thankfully these snakes aren’t aggressive unless threatened.  I positioned myself about 2 feet from the snake and then snapped some photos.  When my flash went off, the sea snake jerked its head toward me and my heart skipped a beat.  And with that, I decided it was time to move on so we slowly backed away in as least a threatening manner as possible… 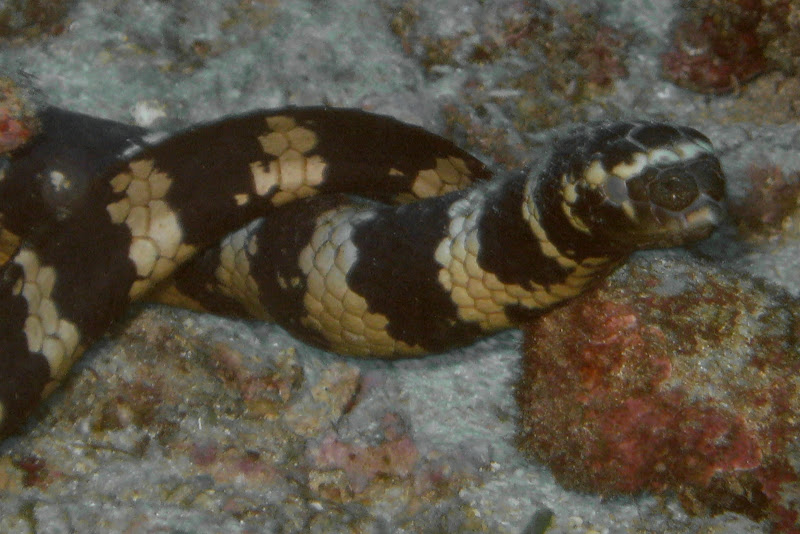 After conducting our safety stop and exiting the water, Trisha and I decided to grab something to eat while the sun set.  Bella Napoli, an Italian restaurant along near Ark Dive, was nearby and both of us heard that it had probably the best pizza on Okinawa…so we decided to go check it out.  While waiting for our food, we completed our log books and planned our next dive.  My Hawaiian pizza was delicious and I ate the whole thing….definitely going to bring James back here for a meal sometime.  The view looking out over the seawall was great and once it got dark, Trisha and I headed back out for our night dive. 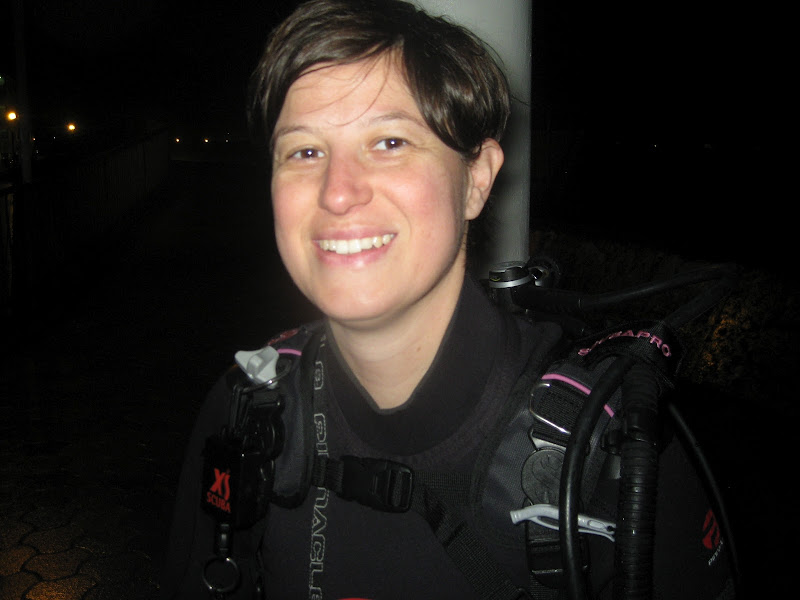 Trisha Suited Up And Ready To Go

When we first stepped back outside it was lightly raining and a little gusty.  EEEWWWW!  We decided to sit in Trisha’s car for a bit to build up some “intestinal fortitude” before gearing back up.  After cranking up the heat and getting nice and warm, we jumped back outside and quickly prepped our gear.  Trisha was smart – she had a rented a second wetsuit to use for our night dive so she had something warm and dry to put on.  Myself on the other hand wasn’t so forward thinking – I was using the same wetsuit from the afternoon so it was cold and wet.  Yuck!  Putting on a wet wetsuit is perhaps one of the most miserable experiences with diving. 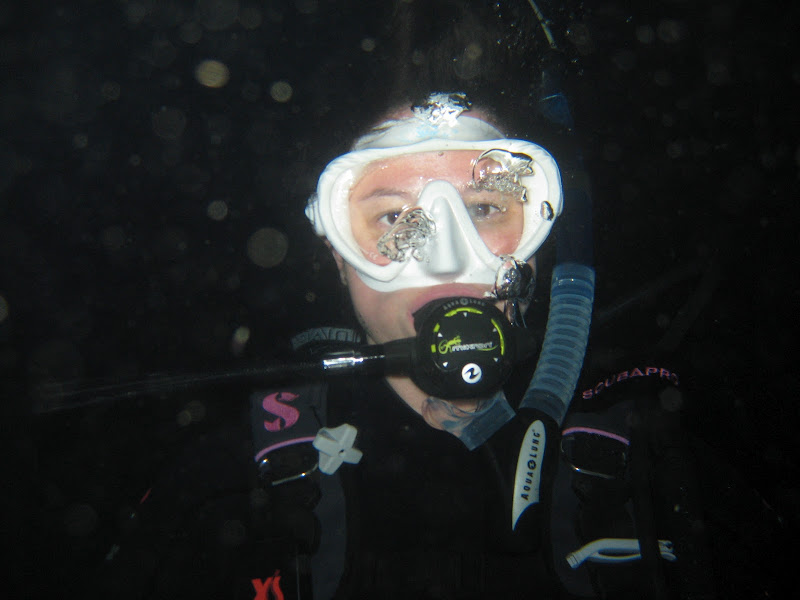 The tide had come in while we were eating so getting out across the coral shelf was easier than our first dive.  We descended underwater and then spent a few minutes just kneeling on the sand to help become more relaxed.  Diving at night can sometimes be stressful to people so I like to give them a little time to just practice breathing deeply and let them chill for a bit.  Trisha didn’t really seem to need this relaxation period (she was breathing normal and seemed very much at ease!) so we turned off our lights for about 30 seconds so she could see what it looked like underwater without shining our dive lights everywhere.  Afterwards we began our dive out along the reef to the north. 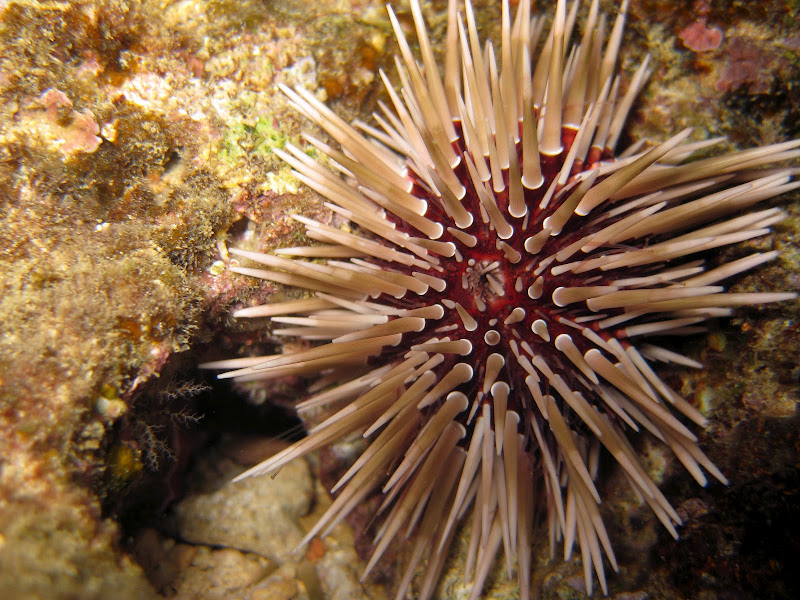 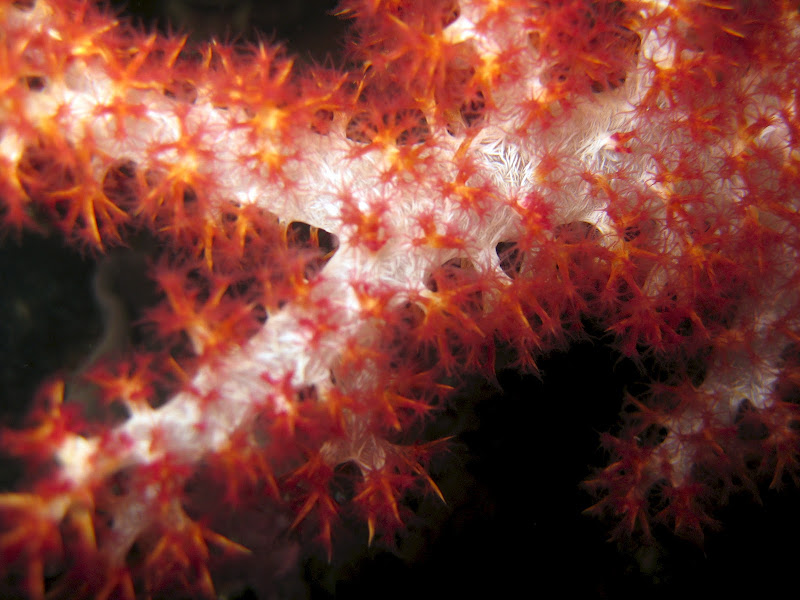 As I was leading the dive, I noticed Trisha using her light to get my attention.  I turned around and swam back to see what she was looking at.  A decorator crab was crawling over the coral I had just swam over.  It was blended in exceptionally well that I didn’t even notice it.  When we came back to the surface at the end of the dive, Trisha told me the crab had moved right as she approached it.  Awesome spotting on Trisha’s part!  We watched it for a bit and I tried to get some photos but the crab kept moving around with made it hard to get the pictures in focus.  Eventually I just decided that a video would probably work best. 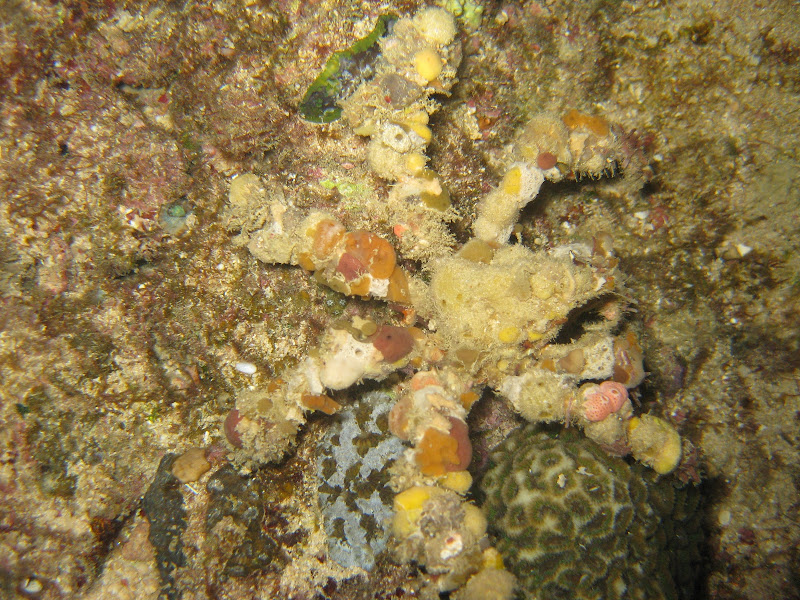 Decorator crabs are really cool because they shell and legs have a velcro-line texture.  Seeking to blend in with it’s surroundings, the crab will attach various objects to it’s shell and legs.  The crab that Trisha spotted appeared to have sponges and rocks attached to it’s shell.  Another neat thing I just learnt about decorator crabs is that they will remove their decorations from their shell prior to molting (shedding of their old shell), “squirrel them away”, and then once their new shell is hard, they will reattach the objects.  Pretty cool, huh?! 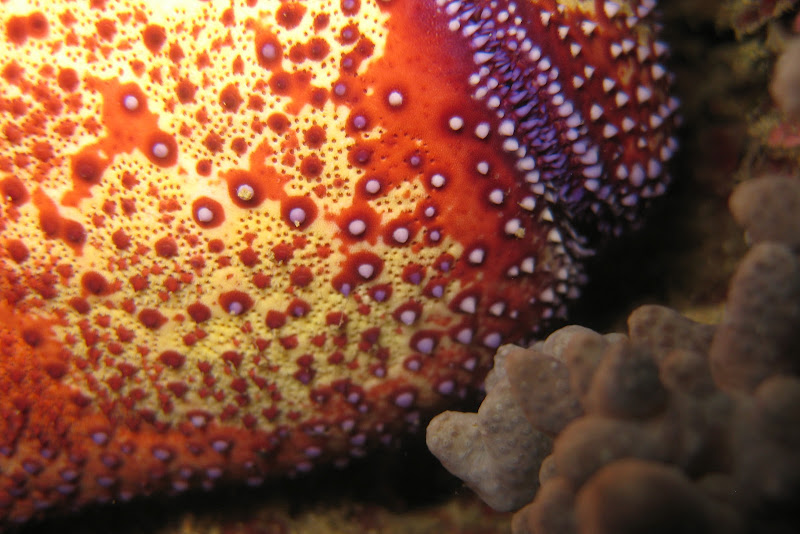 Along the reef wall I spotted a HUGE cushion starfish.  It must have been at least 10 inches across and 4 inches thick.  Absolutely giant.  It had some beautiful colors so..you guessed it…I took some photos.  Did you know that the cushion starfish’s mouth is on it’s underside and they consume food by pushing their digestive organs outside their bodies to engulf prey.  Pretty weird but an amazing design 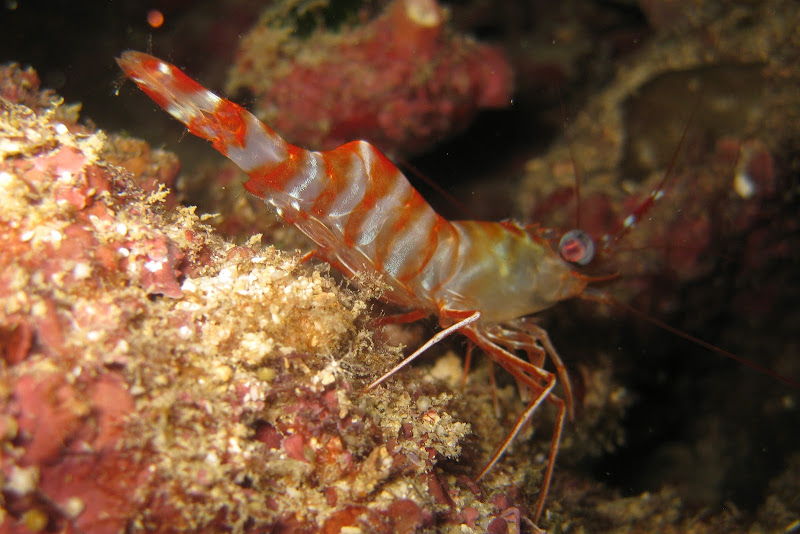 While doing our safety stop near the chain, I decided to check out what was in the nearby coral.  I managed to spot three pretty cool creatures.  First, A shrimp was resting on a ledge and I managed to get several photos.  Next, a crab was hiding out in a crevice but I was quick with the camera and nabbed a photo before he backed up to hide himself.  Lastly, I saw another flatworm, Pseudobiceros Mikros.  Turns out this flatworm is pretty rare so it’s neat that I spotted it! 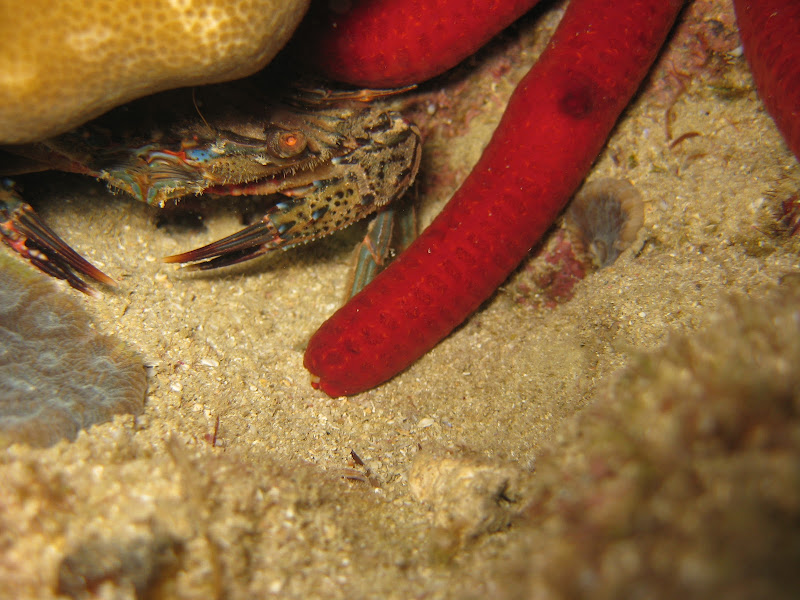 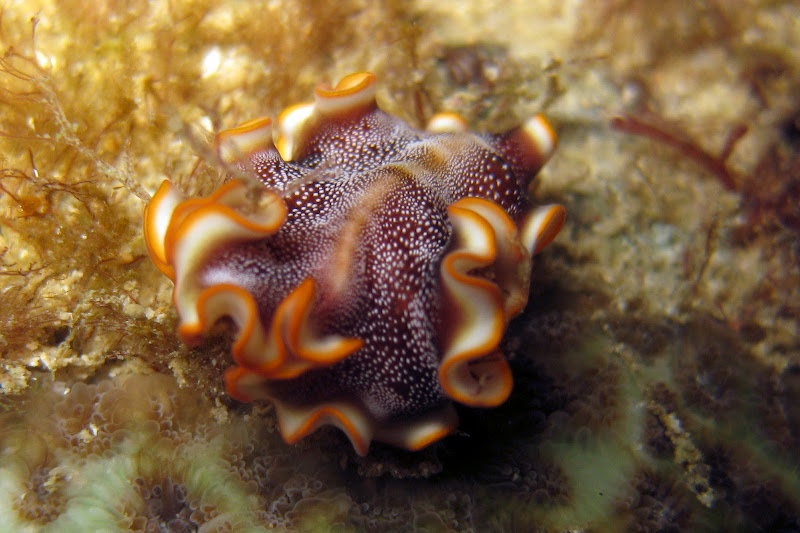 Doing a deep and night adventure dive with Trisha was great because we had the opportunity to experience new aspects of diving and we saw some really cool stuff.  Trisha’s also well on her way to becoming an Advanced Open Water Dive.  3 out of 5 completed.  2 to go!