Despite the rough conditions, James and I decided to make a dive at The Junkyard so he could work towards his Advanced Open Water certification…

Conditions: Incoming tide, powerful waves, strong current, ridiculous surge.  After reviewing our game plan for the dive, my husband and I donned our equipment and started into the water.  I thought the entry would be a bit difficult but it actually turned out to be fairly easy.  As soon as we were past the point where the waves broke, we switched to our regulators and make a quick descent.  After settling on the broken rocks, we adjusted our camera equipment and got a feel for how the current and surge were moving us. 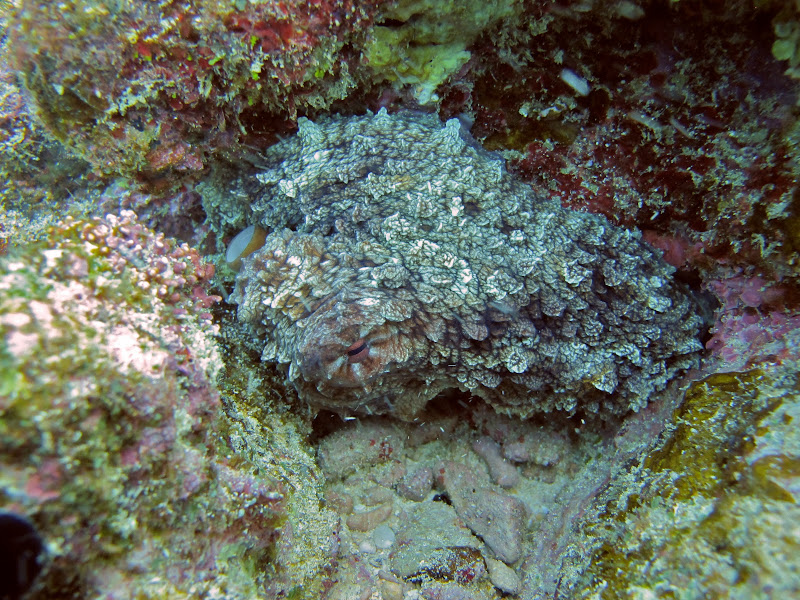 Octopus In Disguise At The Junkyard

After only a few minutes into the dive, I came across the rather shy octopus that lives at The Junkyard.  Out of the few dives I’ve done here, I’ve been able to find him at least half the time.  If you know the right spots to look it’s nearly a guarantee that he’ll be spotted.  Unlike the last time I was here, the octopus did not want to come out of his hiding.  I managed to get my camera in close and take a few photos as he changed his shape and color in an attempt to better disguise himself.  While I was busy taking pictures of the octopus, James was practicing his buoyancy by hovering right above my head.  When I finally looked up from the octopus to find him so we could continue the dive, he was nowhere to be found.  AAHH!  Talk about the worst feeling in the world!  Thinking you’ve lost your dive buddy!  After letting me search around for about 10 seconds, we lowered himself down to where I could see him.  Very funny (not)! 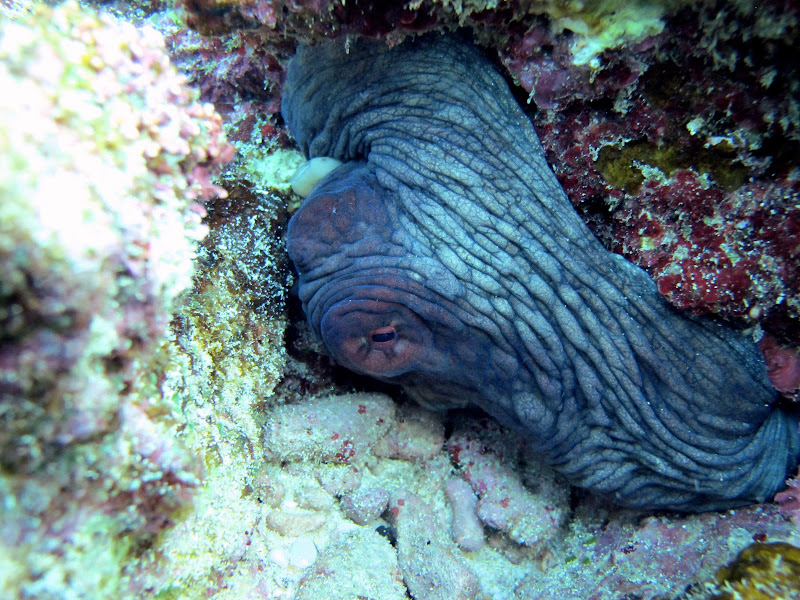 The purpose of our visit to The Junkyard was to let James work towards his Advanced Open Water certification with this being his AWARE-Fish Identification Adventure Dive.  As we swam along, James snapped photos and took count of the local wildlife (which he later identified once we got back on land).  Because there was so so much surge, it was difficult to take photos that would be in focus but James managed to do pretty good. 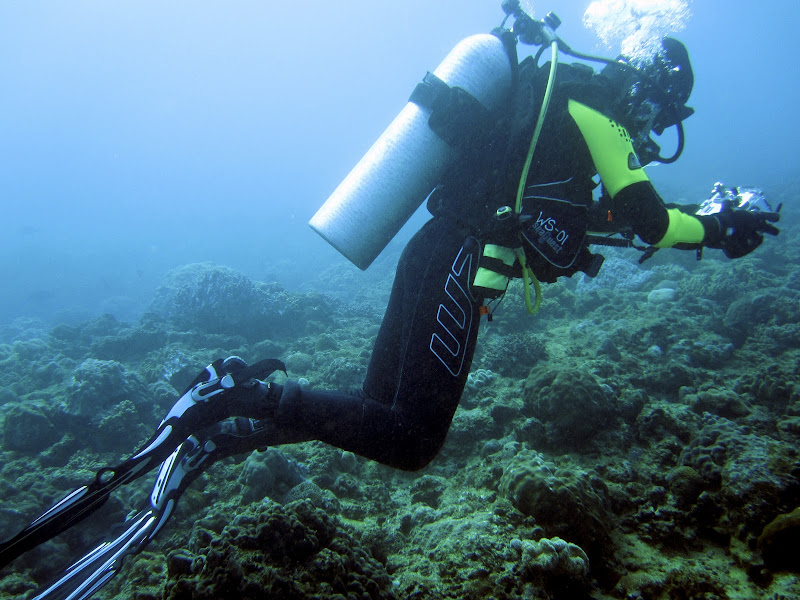 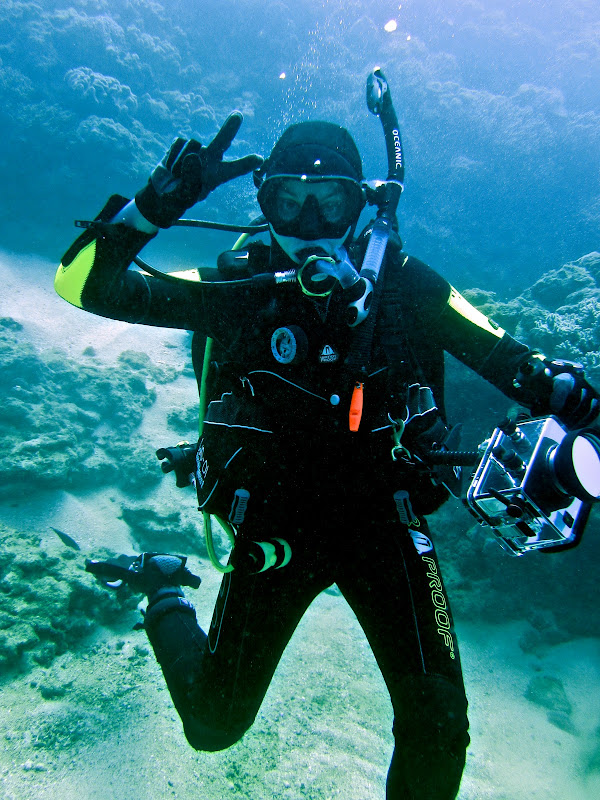 At the end of our dive, I searched around for the octopus but couldn’t find him.  He must have moved on to a better hiding spot than before!  As we completed our safety stop I decided to give James a really good challenge – hovering in 15 feet of water with incredibly strong surge.  Although he’d already demonstrated his ability to maintain good buoyancy during out Peak Performance Adventure Dive, I thought this would be one more way for him to fine-tune his skills.  He handled it with perfection so there were lots of high-fives going back and forth between us.  To finish off the dive, I had James respond to me simulating as if I was out of air.  Once again, no problem.  After “cutting” and retrieving my own regulator, we both signalled to surface and made our way back to shore. 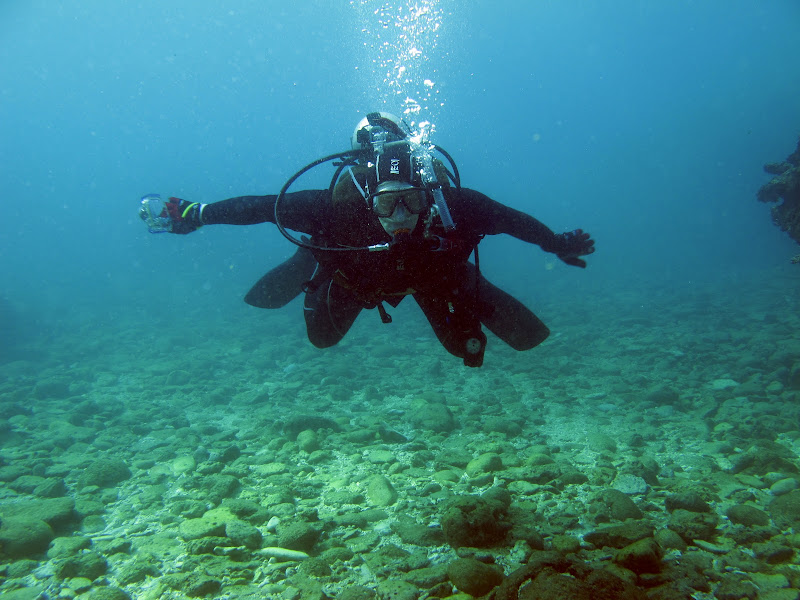 After making it back to our car and taking our gear off James and I decided to not make another dive.  Surfers were heading into the water and we took this as a good cue that conditions were going to get worse as the day continued.  Better safe than sorry!