The weather finally turned pleasant on December 7th so I teamed up with Todd and Jason to go diving.  We planned our first dive to be a drift from Toiletbowl to Horseshoe Beach and we were not disappointed…

After checking out the water and deciding that the conditions looked ideal for a drift dive from Toiletbowl to Horseshoe Beach, we geared up and made our way down to the water.  Walking…actually, more like climbing over the jagged rocks was not very pleasant and by the time we made it down to the water, I was ready to jump in and cool off. 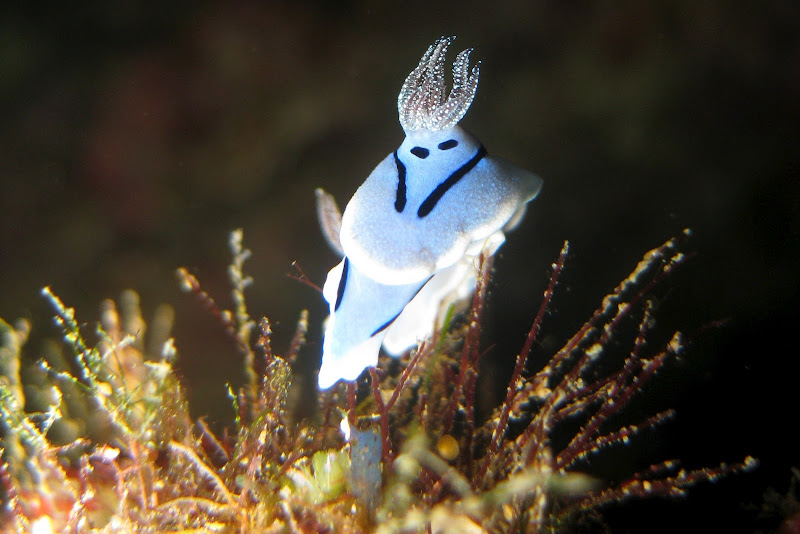 Todd was real familiar with the site, so Jason and I let him lead the way to all the good spots.  The first thing we realized upon entry was that there wasn’t much of a drift to take us to Horseshoe Beach.  If anything, we actually ended up kicking against a small current for most of the dive, but it was very moderate so the dive was still very enjoyable. 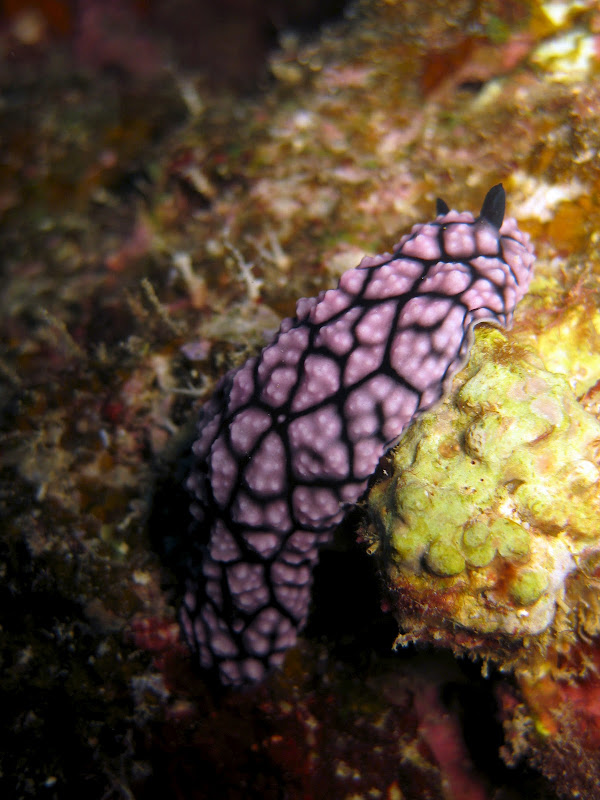 One of the first things I noticed about the dive was the amount of nudibranchs found along the wall.  There were tons and Todd pointed out a few I had never seen before.  For the most part, I tend to focus my dives on photography at the macro-level so so diving with Todd is always a real treat.  He’s got a great eye for spotting micro-fauna and he makes sure to point it out so everyone can get a good photo.  Now that’s some great dive etiquette!  I managed to get photos of what I believe to be the Phyllidiella pustulosa nudibranch, chromodoris willani nudibranch, and  the chromodoris lochi nudibranch.  I tried snapping a few shots of several phyllidiella pustulosa nudibranchs I came across but they were entirely un-photogenic.  Despite all my efforts, the pictures came out very ho-hum (as seen below). 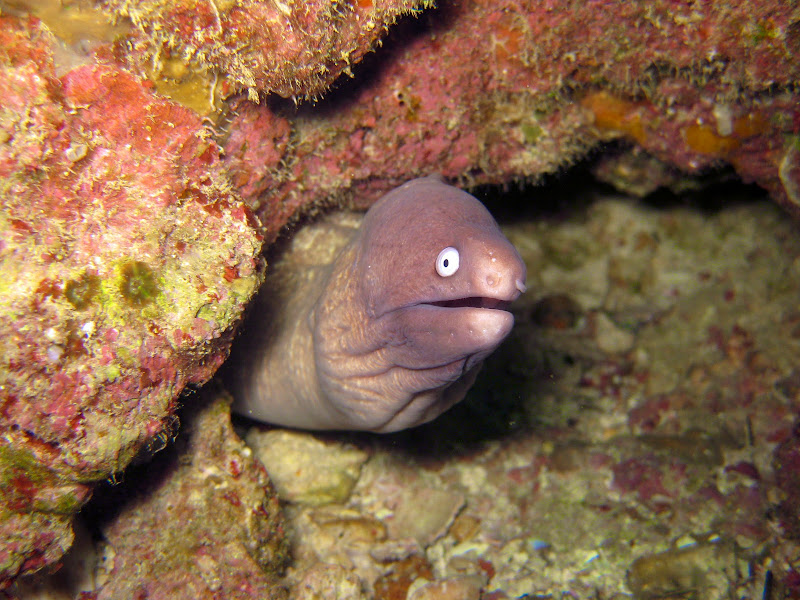 About 10 minutes into the dive, Todd spotted a small, white-eyed moray eel within the coral wall.  We all gathered round and snapped some photos.  He didn’t seem very scared by our presence but after a few minutes I noticed he began to slowly retreat backward.  Not wanting to overstay our welcome, we all backed off and proceeded on with our dive.  It wasn’t but a few minutes later that I spotted a whitemouth moray eel at about 60 feet.  I signalled to Jason to come look and he relayed it to Todd.  We all descended and started snapping away with our cameras.  The whitemouth moray eel was a pretty big guy and he gave us some good shots of his sharp teeth!  Of course my camera battery decided to go dead on me right when I was starting to get some good photos so my pictures of the him didn’t turn out so good.  Imagine me trying to turn the camera on and then take a picture really quick….So annoying!  However, Todd got some nice shots and he agreed to let me use them in my blog entry. 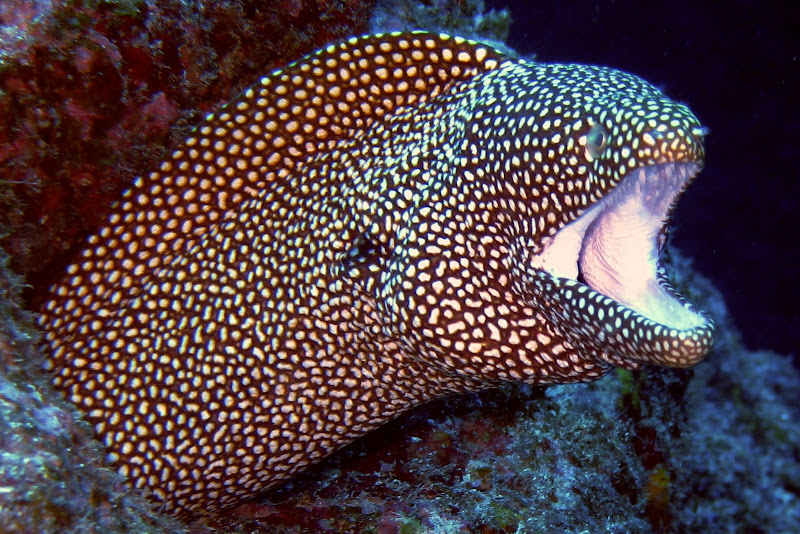 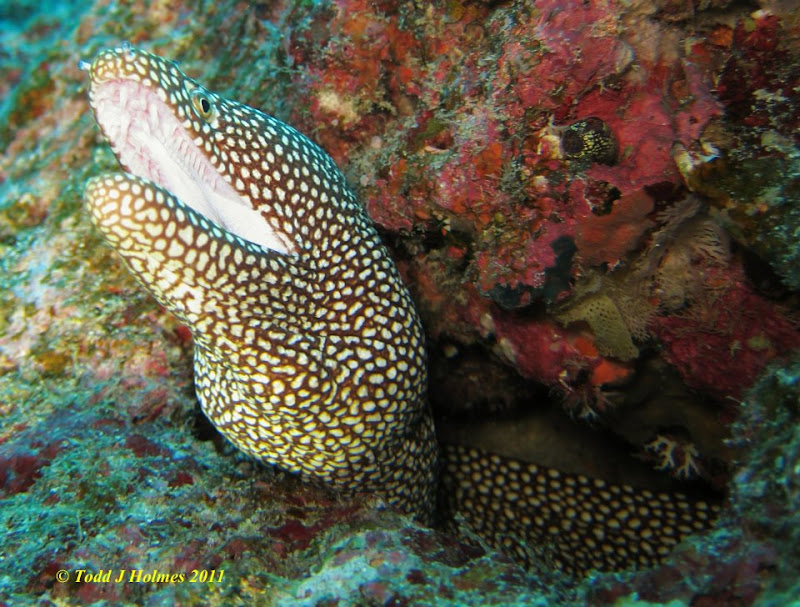 Todd’s Photo of the Whitemouth Moray Eel – Look at the Teeth!!!!!

The last cool wildlife we came across was a scorpionfish with coloring like I’ve never seen before.  Like all scorpionfish he was multicolored…but in a totally ridiculous way.  I definitely did a double-take to make sure my eyes weren’t fooling me.  Even at around 50 feet where we found him I noticed the neon coloring on his scales, so when I got home and quickly did some editing in Apperature to remove the blue-ish tinge to the photo, I was very pleased with the results I got.  I wish my battery hadn’t gone dead o me so I could have taken more pictures of this guy. 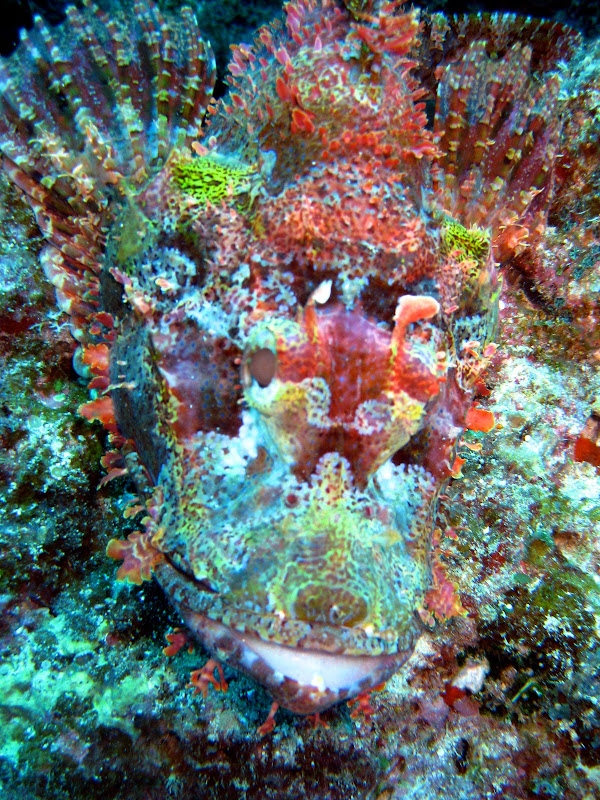 As we came closer to Horseshoe Beach, we all started getting low on air and Todd took us up a nice cut in the coral to make our exit.  Once on the surface we all commented on what an awesome dive we had just made.  Definitely  great memories to add to my log book!